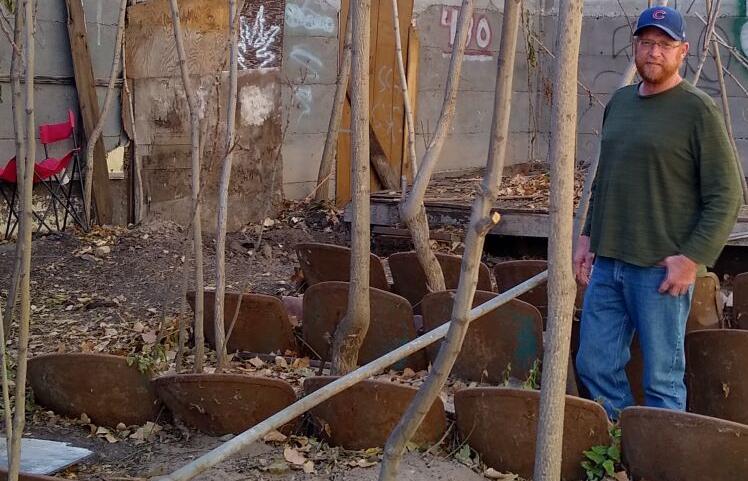 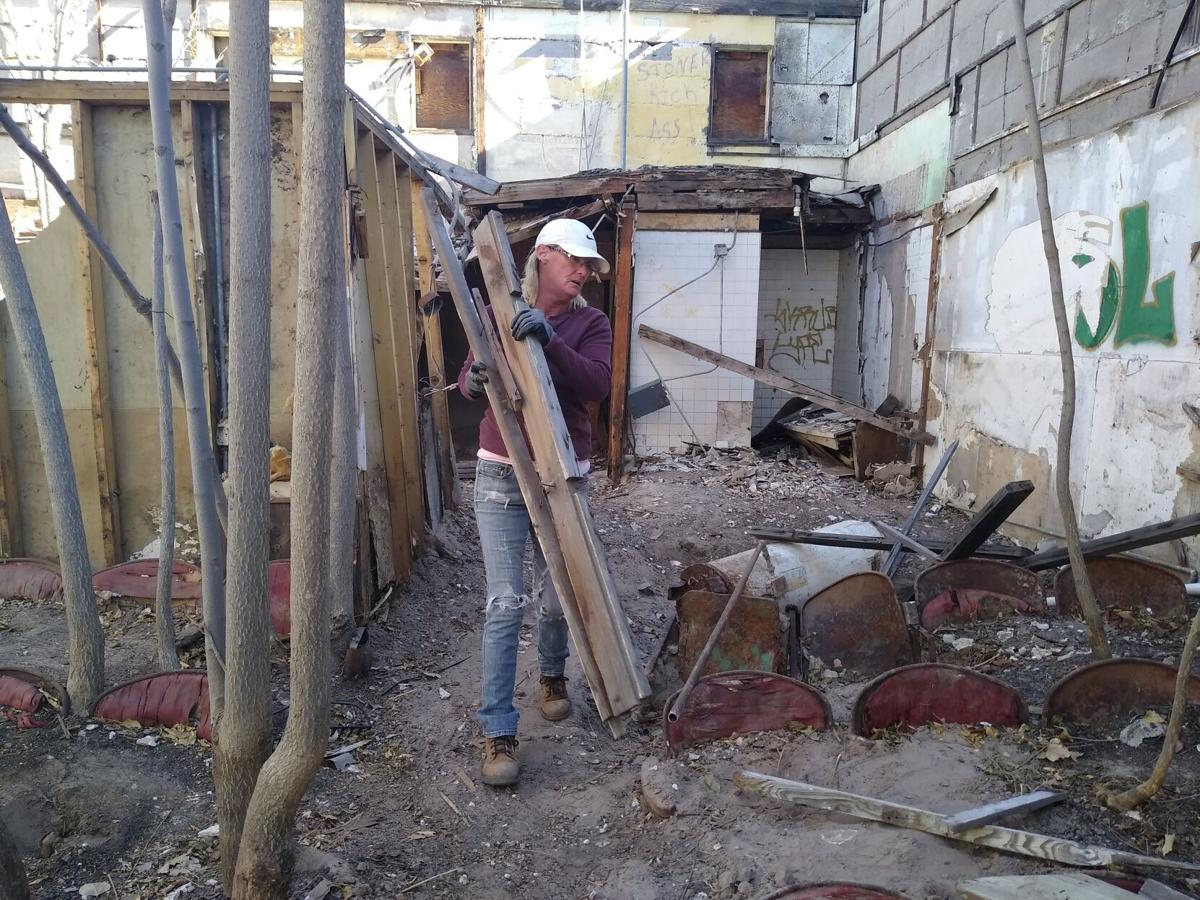 Jodi Nichols has been clearing debris from the old Duncan Theater since October. 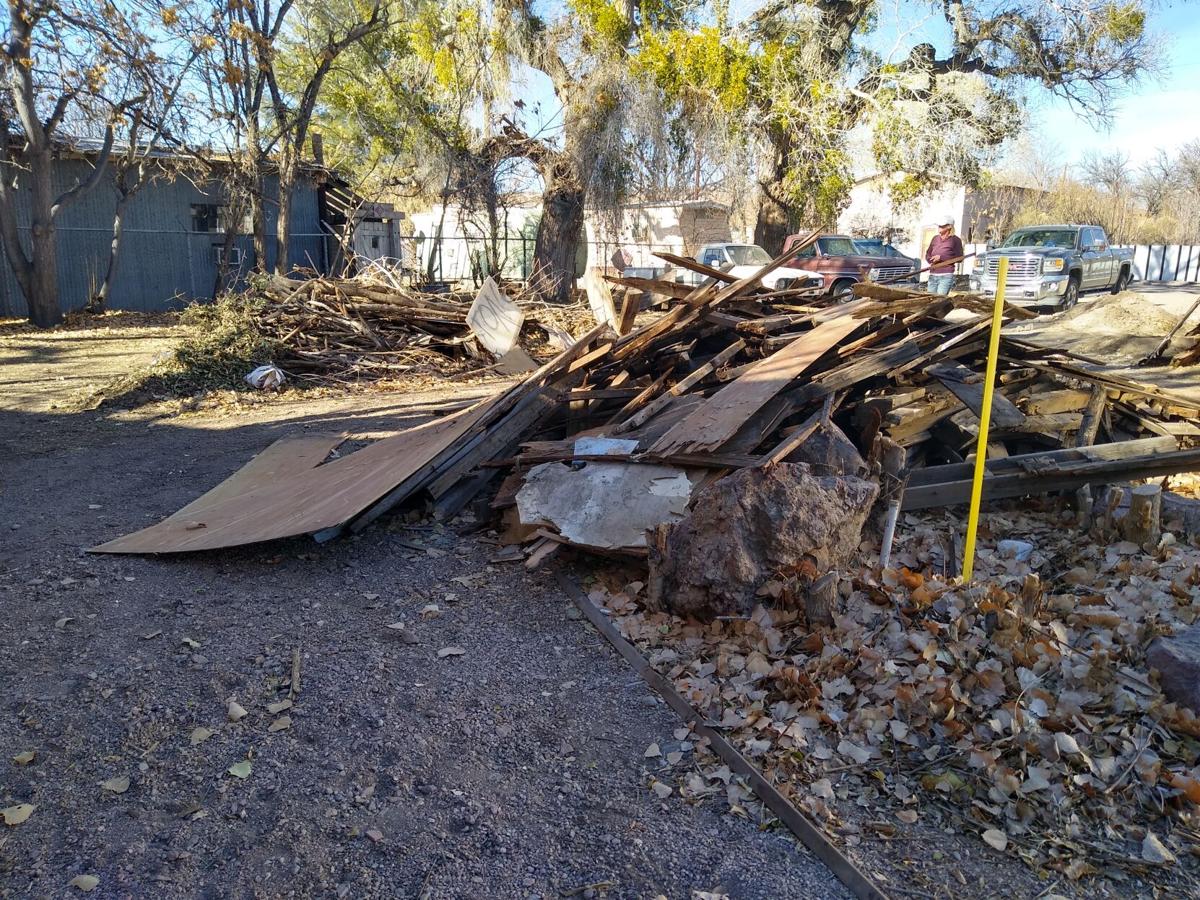 More piles of debris are ready to haul off.

Jodi Nichols has been clearing debris from the old Duncan Theater since October.

More piles of debris are ready to haul off.

Imagine relaxing with a cup of coffee or iced tea listening to the wind rustling leaves and watching small birds flit from tree to tree right in the middle of Duncan.

Thanks to Jodi Nichols, it could happen.

Since October, the Duncan native has been hauling wheelbarrow after wheelbarrow of roofing materials, dead leaves and other debris out of the long-dormant Duncan Theater.

Visitors driving down the Old West Highway probably know the theater is closed and isn’t showing the old Indiana Jones movies that are on the posters outside, but what they probably don’t realize is what it looks like behind the locked doors.

The roof is completely gone, as is the box office. The vast majority of the seats are completely covered by several feet of dirt and hundreds of trees jut into the sky, some at least 20 feet high. Some of the walls have been tagged with grafitti and at least one is leaning.

The theater was beseiged by flood water in 1972 and mucked out, but it happened again in 1979 and this time, the force of the water bowed out the walls, causing the roof to collapse.

The owners decided they had had enough and the theater sat empty for decades.

A couple of years ago, when the theater owner’s widow sold the Town of Duncan the building next to the bakery, she gave the Town the theater for the cost of her back taxes, $400, said Duncan Town Manager John Basteen said.

Standing inside the former theater Basteen said he was reminded of a bird sanctuary and finds the atmosphere “quite nice.”

Nichols volunteered to clear up the debris in October, but on Thursday night the Town Council, impressed with her work, agreed she deserved to be compensated. They settled on an $1,800 paycheck.

Town Councilmember Deborah Mendelsohn’s business, The Simpson Hotel, is located behind the theater and it is she who suggested Nichols be paid for her work.

“I saw she was working over there just about every day and when I asked the town manager if she was being paid, he said she was just doing it for something to do, she wanted something to do that was good for the town,” Mendelsohn said. “I was just floored. She’s just a fantastically kind woman.”

There are discussions underway of hiring a civil engineer to see if the remaining walls are structurally sound and if what remains of the building is worth saving, Basteen said.

No one is quite sure how old the building is. Local resident and businessman Doug Barlow knows it was built sometime before he was born in 1943 and he remembers well the crowds that would gather on Thursday nights, lured by the idea of winning a weekly cash drawing.

“Once it got as high as $400 and there wasn’t a parking place in downtown Duncan,” Barlow said. “The movie wasn’t worth two cents, but people would come for the drawing.”

So far, Nichols has filled a 40-yard roll-off Dumpster six times with cleared materials and probably has at least another three loads ready to go, Basteen said.

“It was kind of overwhelming at first, but once I started it wasn’t a big deal,” Nichols said.

She started at the back and has been steadily moving forward.

If an engineer believes the building is saveable, Basteen said the council will have to decide what comes next. Will they like the idea of an outdoor reading spot or coffee shop? Should the seats be dug up and removed or should materials be brought in to simply cover them up and level the ground? What should happen to the trees? What would they think of adding a water fountain?

Mendelsohn said she likes the idea of an open air cafe, but if and when the town puts the property up for bid for lease or purchase, she is determined to vote for whomever comes up with the “most creative idea that has the greatest benefit for the town.”

Nichols, 47, was too small to see any movies at the theater, but her sisters did, she said.

Asked her opinion on its future, Nichols said she just wanted “something good to come out of it.”