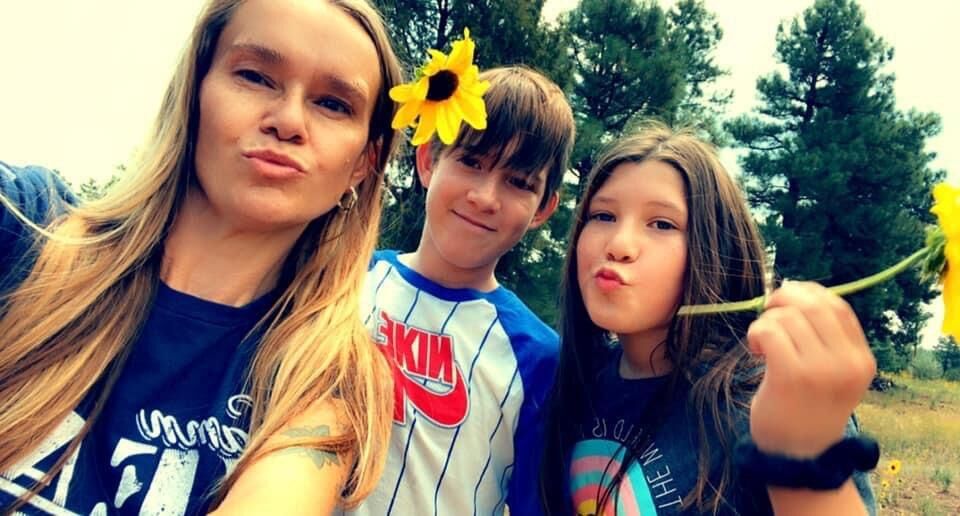 Amy Sawyer adopted her children William Christopher Sawyer, 13, and Lexi Kaula-Marie Sawyer, 11, in 2017 after first being their foster mom.

In 2015 Amy Sawyer became a foster parent. In 2017 she adopted her children, William Christopher Sawyer, 13, and Lexi Kaula-Marie Sawyer, 11.

Amy Sawyer adopted her children William Christopher Sawyer, 13, and Lexi Kaula-Marie Sawyer, 11, in 2017 after first being their foster mom.

In 2015 Amy Sawyer became a foster parent. In 2017 she adopted her children, William Christopher Sawyer, 13, and Lexi Kaula-Marie Sawyer, 11.

Amy Sawyer, a Safford foster mother, remembers the first night her children spent the night at her house. They cried and cried, and she spent the night on the floor in their bedroom so they could sleep. Later she would realize that she needed them as much as they needed her.

That’s why she adopted them.

Nowadays they spend their weekends camping, riding four-wheelers and just spending time together.

“My kids were my first placement,” the single mother said. “Adopting was the best decision I ever made.”

Right now there are 42 children in foster care in Graham County and seven in Greenlee County, said Darren DaRonco, a spokesman for the Arizona Department of Child Safety.

There are 22 licensed foster care homes in Graham County and two in Greenlee County.

And while not every DCS investigation leads to the removal of a child, the number of parents being investigated for abuse and neglect is on the rise in Graham County, DaRonco said.

Sawyer first became interested in being a foster parent in 2015, and that was when she met William, now 13, and Lexi, now 11.

“I can’t have children of my own, so I decided I wanted to foster,” she said.

“I cared for them for almost two years before I adopted them.”

After the adoption she stopped fostering other children for a while so she could focus on her children’e emotional needs. Their parents were in jail when she first met them and they had a difficult time adjusting.

“They were living in and out of a lot of motels. They thought stealing was okay. Lying was okay,” she said.

Helping her children learn what normal behavior was took time and understanding.

She also let them communicate with their biological parents, which she thinks was a major help.

“I think giving them the opportunity to know their biological parents has helped them not wonder the what-if’s,” she said.

The children also have a healthy relationship with their grandparents, Sawyer said. These relationships have helped her little family grow.

In 2017, the relationship she had with her children became even more important.

Sawyer, who had been diagnosed with a chronic immune system disease called eosinophilic esophagitis in 2012, suddenly took a turn for the worse.

“In 2017, I started to get really sick. The Mayo Clinic had no idea what was going on. I had esophagus spasms from airborne and food allergies, but it made me throw up 20 to 50 times a day.

The spasms were excruciating. Eating certain types of foods or smelling something could trigger a spasm, she said. Even after surgery in 2018, the spasms didn’t stop. At one point, she went for 10 days without eating.

“I wanted to die, I wanted to give up, but I would never do that to my kids,” Sawyer said.

For a time, she even had to rely on a feeding tube.

Eventually, Sawyer learned to live with the intense and painful reactions to foods, smells and pets. She was able to live her life and survive for her children.

“The children seem to distract from the pain or medical problems that arise,” she said.

In 2020, she felt her family had reached the point where she could open her doors once again to children who needed a home.

This time, her experience as a foster parent has been different. The children only stay with her for a short time and are then placed with family members.

“I get a call from my caseworker, they discuss the case with me, and they ask if I’m interested. The child will be dropped off in a couple of hours, sometimes they have clothes and a few toys, sometimes they only have one outfit,” she said.

She has a collection of clothes for children of multiple ages she keeps in 10 totes in her house. Also, she receives a monetary amount from the government to help feed and care for the children.

“The last six months I’ve been recertified...it’s been a revolving door. I don’t know when I get the call, when they’re coming or when they’re leaving. You have to be very open-minded,” she said.

She fosters newborns up to 12-year-olds. She decided to care for younger children because of her smaller stature. She is 5-feet tall and weighs 90 pounds and worried about not being able to properly provide for an older and taller child.

The first couple of days staying in a new home can be stressful for the children. She helps the kids settle into their routine and feel at home by treating them exactly like her own children.

Over the time, Sawyer said she has learned about herself and children.

“I learned how much I love babies,” Sawyer said. “How natural it was for me, taking care of them.”

Although being a foster parent can be challenging at times, it’s an incredible experience, she said.

“Out of everything I’ve ever done in my life, it’s very rewarding. And when they know you’re someone who can help and trust them, it’s priceless,” she said.

Sawyer said she feels driven to help each child feel supported, safe, and loved. She remembers one little girl she was convinced would never trust her.

“The night before she left she finally jumped up into my arms and cried and cried. It’s definitely emotional just knowing you’re able to break through to this child that is suffering, heartbroken, and scared. It’s heartbreaking, but to know you touched a child that deserves that day in and day out, and they don’t get that.”

When she fosters a child dealing with a physical disability, it can be difficult. However, Sawyer tries her best to boost that child’s self-esteem.

“When you get a placement, and they may have a medical condition that they feel insecure about, and you say, ‘You’re so beautiful. You’re my princess,’ and they start lighting up and smiling and looking in the mirror and feeling good. That is what it’s about for me,” she said.

To deal with the grief of saying goodbyes to each child, Sawyer gets a tattoo on her arm. Each tattoo is the name of a child who has shared her home.

“One of the most memorable experiences for me is to see a (child) reunited with family. A lot of tears of joy are shed on both sides,” she said.

Or visit the Arizona Department of Child Safety website at

https://dcs.az.gov/ to find out more about foster care in Arizona.