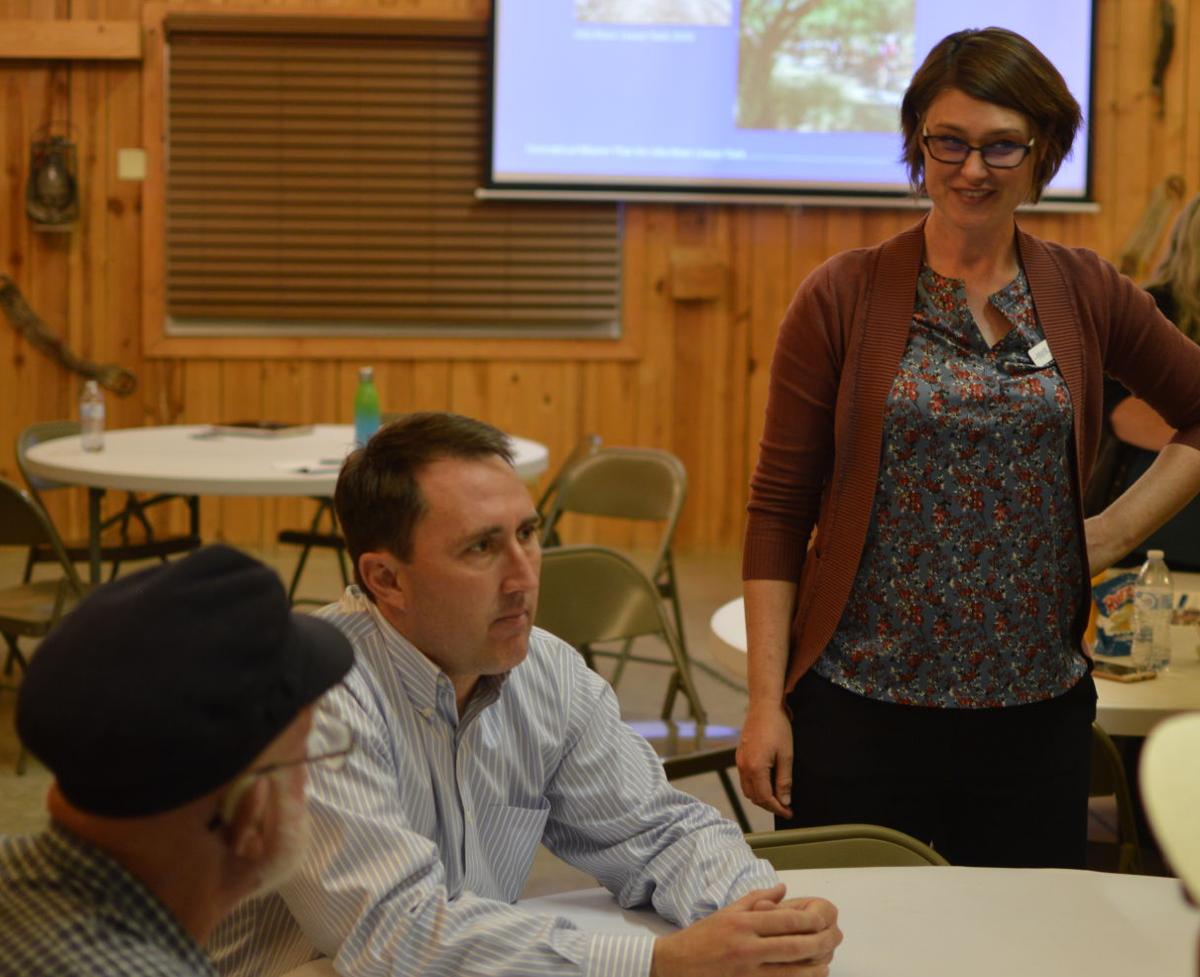 GWP Director Melanie Tluzcek stands next to Graham County Supervisor Danny Smith (left) at a round-table discussion with members of the community. 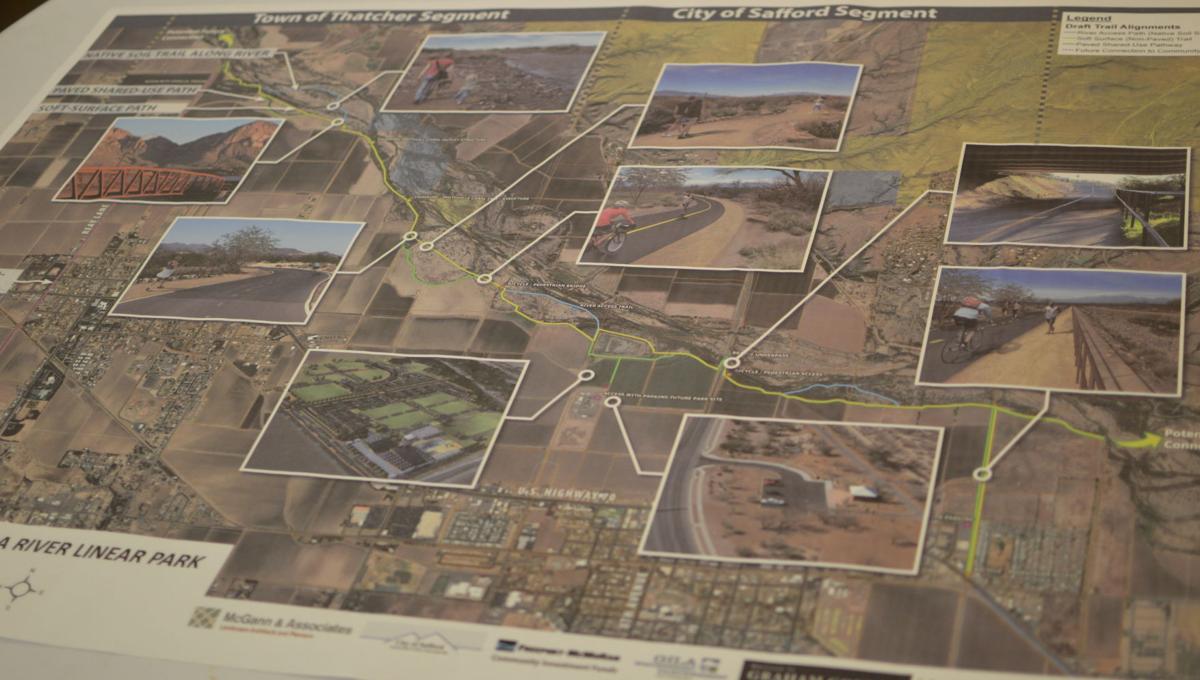 A map of the proposed park follows the southern river corridor through Safford and Thatcher. 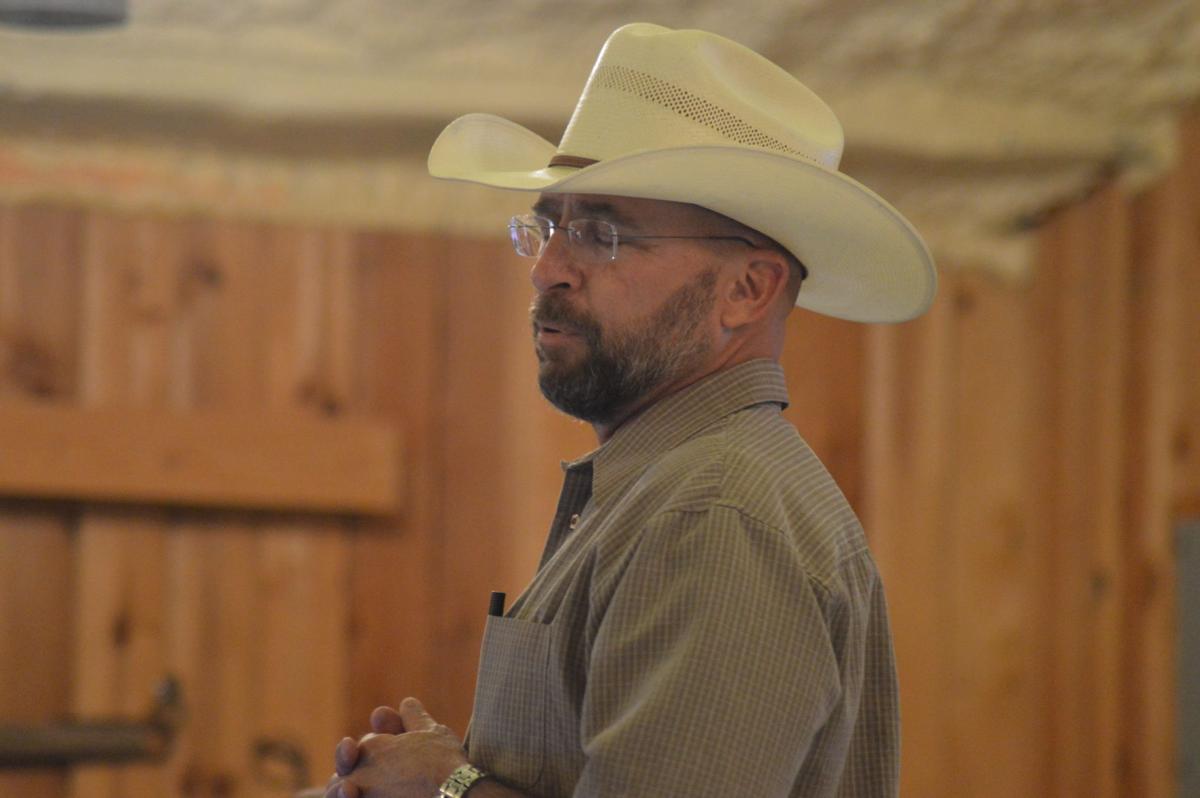 Eric Swanson talking about the reduction of wildcat dumping that may come as a result of the parks development.

GWP Director Melanie Tluzcek stands next to Graham County Supervisor Danny Smith (left) at a round-table discussion with members of the community.

A map of the proposed park follows the southern river corridor through Safford and Thatcher.

Eric Swanson talking about the reduction of wildcat dumping that may come as a result of the parks development.

SAFFORD – For the first time ever, the dreamers behind the the Gila River Linear Park unveiled their concept for the trail last week at a meeting held by the Gila Watershed Partnership.

“Collectively, we can do a lot of cool things,” said Eric Swanson of Langley Properties. “I think there are some really cool things going on here. This will be a place where families want to go, where they can feel safe. It’s going to be a great fit for everybody.”

Held at the Circle D Ranch House on Discovery Park Campus, the meeting welcomed the public and stakeholders to come observe the scope of the plan and offer comments and suggestions on the development of the park going forward. The GWP welcomed speakers from developers and architects to give a presentation on the design plan for the park.

“I’m really proud to be a part of this project,” said architect Don McGann of McGann & Associates out of Tucson. “This is a park for the community and we want you to be part of the design.”

The trial will be built in segments over several years. The initial trial will be as long as five miles in length and will comprise a number of features including both paved and unpaved paths, restrooms, and pedestrians bridges. Eventually, the trail could include scenic benches, bird-watching stations and interpretive exhibits.

Those behind the project believe the park will become a tourist destination. It will provide people a chance to get out and exercise and enjoy the river, while increasing property values and restoring habitat.

The corridor proposed for the park is along privately owned land and the funding for the initial phase of the project came courtesy of funding provided by Freeport McMoran and the William and Flora Hewlett Foundation.

They hope to finish creating a master plan for the project by the end of May, at which time it will be presented to the public for additional input and eventually, to local city councils and Graham County Board of Supervisors. After that, they’ll begin hunting for funding.

The idea for the park had been floating around for some time and the GWP eventually crossed paths with Graham County Supervisor Danny Smith, who had similar ideas in driving tourism to the region. In August last year Smith shared his plans at the quarterly public meeting of the Greenlee County Tourism Council. Speaking alongside Clifton Mayor Luis Montoya, Smith discussed forming a “string of pearls” along waterways in Graham and Greenlee counties. The Gila River Linear Park looks to be the first link in that chain.

The GWP and associates acknowledge there are a number of challenges to be overcome in bringing the project to fruition.

“It’s a relatively high cost investment, so there needs to be a protection from flooding,” Swanson said.

In addition, there’s the problem of wildcat dumping. The ADEQ described wildcat dumping as the disposal of waste in any location that has not been approved by the department.

The trail, which is proposed to stretch between Little Hollywood and Reay Lane along the south side of the river, is an area notorious for wildcat dumping and has been the site of several cleanups sponsored by groups like Southeastern Arizona Clean and Beautiful. The creation of the park may change all of that however.

“The legitimate use of corridors have resulted in the reduction of wildcat dumping,” Swanson said.

“We’re seeing that actually work at some of the areas we’ve been doing cleanups for a long time,” GWP Director Melanie Tluczek said. “For example we had a cleanup along the San Francisco river this past weekend, and we had 45 people out there. That’s a record number and one of those sites was absolutely trashed the first time I visited it two years ago and I, for the life of me, could not find a piece of garbage there this time.” Tluczek said SEACAB is aware of the Gila River Linear Park project and the group has expressed its excitement to clean the area in preparation for the opening phase of the park.

Approximately 40 people turned out to offer their thoughts on the project. One man who identified himself as having been a local farmer expressed concerns of confrontation between the agricultural community and those making use of the park. He stated there would need to be multiple access points through the land across the trail and he was also concerned about the damage a sudden river corridor fire could do to park trails.

Another woman familiar with local water concerns said, “It’s imperative that this project does not divert any water from the river.” She noted there are ongoing legal battles between the Graham County Irrigation District and the San Carlos Apache Tribe and Gila River Indian community. That led to the question of whether the plants planned for the park would be able to be planted along the corridor without violating any agreements, but Tluczek said there would be no issue.

“The plan we have currently is really focused on the trail alignments and making sure that what we’re doing benefits everybody. You know, including the farmers and other land users, and link in with the plans that the city has as well,” she said.

The GWP said that while there isn’t another community meeting in the same vein as this one planned for the future, the public will be welcome to attend presentations in future meetings with the Safford city council, Thatcher town council, and Graham County Board of Supervisors.

The GWP is an organization that works to improve and preserve the health of the Upper Gila Watershed for communities in Graham and Greenlee counties. Meetings are free and open to members of the public. For more information go to www.gwpaz.org.