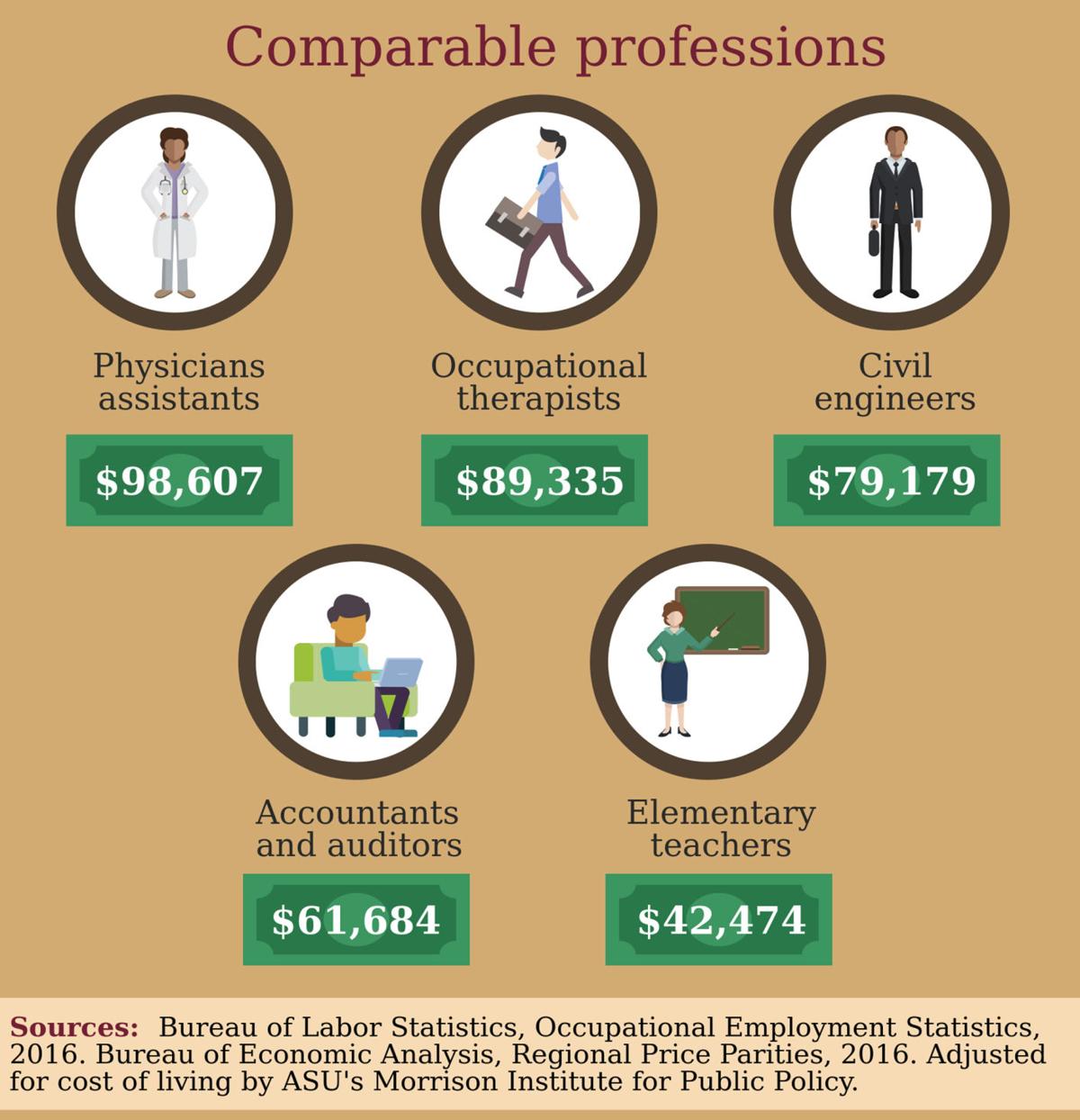 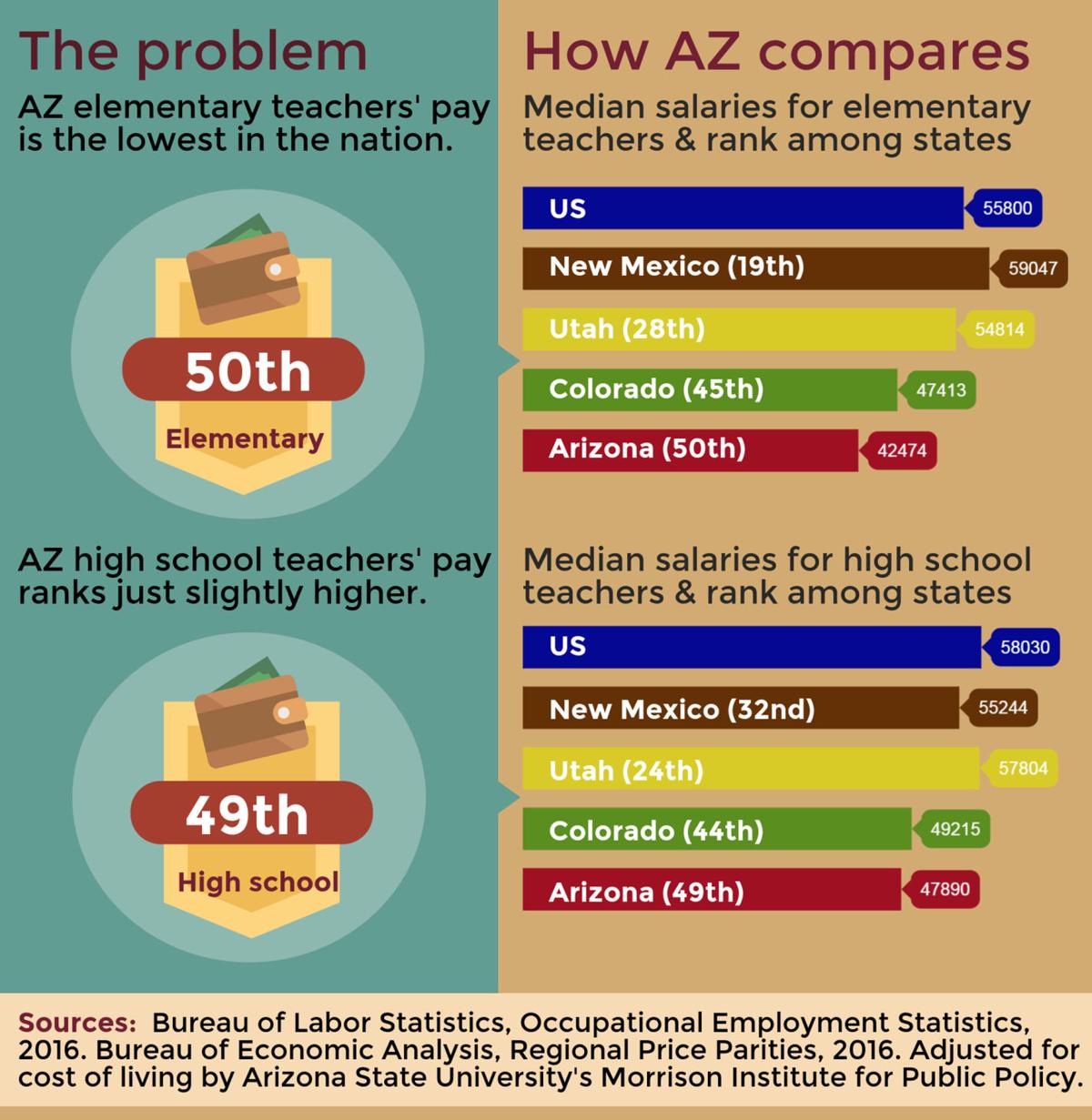 PHOENIX — Business, education and nonprofit leaders say that raising Arizona teachers’ salaries to the U.S. median would do more than recruit and retain quality teachers.

Elevating teachers’ salaries has a great potential to improve measures of student success, like reading and math proficiency and the graduation rate, said Dick Foreman, president and chief executive officer of the Arizona Business & Education Coalition.

“Nothing impacts a child’s education more than a qualified teacher, and research exhaustively documents that a stable teaching environment is key,” Foreman said.

Foreman and other leaders who contributed to development of the new statewide education goals being tracked by the Arizona Education Progress Meter said addressing teacher salaries is urgent. While the target for reaching all other progress meter goals is 2030, a five-year timeline was agreed upon for increasing Arizona teacher pay to the national median.

Progress meter goals range from improving access to early education to achieving a postsecondary education, and quality teachers are key to reaching all of them.

“As a state, we must invest in more competitive pay for our educators to attract and retain teachers in the classrooms across the state,” said Jackie Norton, president and chief executive officer of Rodel Foundation of Arizona. “As we do, it will be critical to also address high-quality teacher preparation, mentoring and induction, and strategies to improve teacher working conditions to ensure more teachers enter and stay in the profession.”

The issue is critical in Arizona where 1,328 teaching positions, or 18.4 percent, remain vacant about a month into this school year, and less than half of teacher vacancies going into this school year were filled by those who graduated from a college of education with a standard teacher certificate, said Justin Wing, past president of the Arizona School Personnel Administrators Association.

Where we are now

“Each goal will have some financial impact, with teacher pay expected to have the largest,” said Erin Hart, interim president of Expect More Arizona, which coordinated the progress meter goal-setting and will track results.

Right now, Arizona teachers’ median salaries are among the lowest in the nation.

When adjusted for the cost of living, Arizona elementary teachers’ pay of $42,474 ranks 50th among the states, according to “Finding & Keeping Educators for Arizona’s Classrooms,” a recent report from Arizona State University’s Morrison Institute for Public Policy. That is $13,326 below the U.S. median of $55,800.

“Whether it’s a business, or a school or a government entity, the quality of the people you have is always going to be the primary determiner of the success of the organization,” said Rich Condit, former chief administrative officer of Sundt Construction.

Teachers must invest in a quality education and complete a four-year college degree before they can start working in the classroom. In other professions, people can begin with some work experience, training, certification or a two-year college degree and seek out further training or education over the course of their career.

Physician’s assistants, occupational therapists, civil engineers, accountants, auditors and teachers all must have a bachelor’s degree to begin their career.

Yet teachers earn nearly 60 percent less than these other professionals with similar education levels, and teachers’ decreasing salaries in many countries have made the profession less attractive, according to the Organization for Economic Cooperation and Development’s recently released 2017 Education at a Glance report.

What it would take and possible solutions

Funding increases in teachers’ salaries makes good sense to many in the business community.

To increase Arizona teacher salaries to the U.S. median, the state will have to make a concerted effort to raise education funding, according to a recent East Valley Tribune article.

How much money will it take? An additional $900 million to $1 billion in funding, according to an estimate developed by Expect More Arizona in conjunction with the Arizona School Boards Association, as reported in a story on KJZZ 91.5 FM.

The estimate is based on data from the Arizona Department of Education and an analysis of employee-related expenses for the more than 59,000 teachers in Arizona that includes state retirement contributions, Social Security contributions, workman’s compensation and inflation that was done by Dr. Chuck Essigs, director of governmental relations for the Arizona Association of School Business Officials and Dr. Anabel Aportela, director of research for AASBO and ASBA.

“We need to continue to bring people to the table and have difficult conversations as we prioritize our existing funding and as we talk about opportunities for new revenue as well,” Hart said.

One possible solution is voters’ renewal or expansion of the sales tax in Prop. 301, which expires in 2021. Another option is levying an excise tax on electricity generation, which would need legislative and voter approval to move forward.

Prop. 301 was approved by voters in 2000. It increased the sales tax by six-tenths of a percent to fund public education and generates about $650 million a year. The majority of it goes toward teacher compensation.

“There’s no question that losing this funding would have a significant impact on both our K-12 and our higher education systems in Arizona, so it’s time for a broad coalition of business, community and education leaders to come together to create a proposal and a timeline for us to renew and expand Prop. 301,” Hart said.

Levying an excise tax on energy production is not new; revenues derived from it tend to be less regressive, and it can raise substantial new funds, Foreman said.

“It is one of the most utilized revenue streams in our neighboring Western states to supplement education funding,” Foreman said. “Texas, Nevada, Wyoming, North and South Dakota are just a few examples of states that have done just that.”

The concept proposes that the state charge energy consumers a 1.25 cents-per-kilowatt-hour fee phased in over three years, according to an article in The Arizona Republic.

“Because they are applied to a commodity or service, (excise taxes) can import a lot of money from the use of that commodity by consumers in other states, which lessens the burden on Arizona taxpayers,” Foreman said. “Why not get California energy users to pay their fair share for the use of Arizona’s precious water, land and air resources, and support our schools as our primary objective?”

It boils down to this:

“Ultimately, Arizona needs a long-term funding solution for education from the early years to attainment that supports each indicator,” Hart said. “That solution shouldn’t pit one part of the education continuum against the other.”