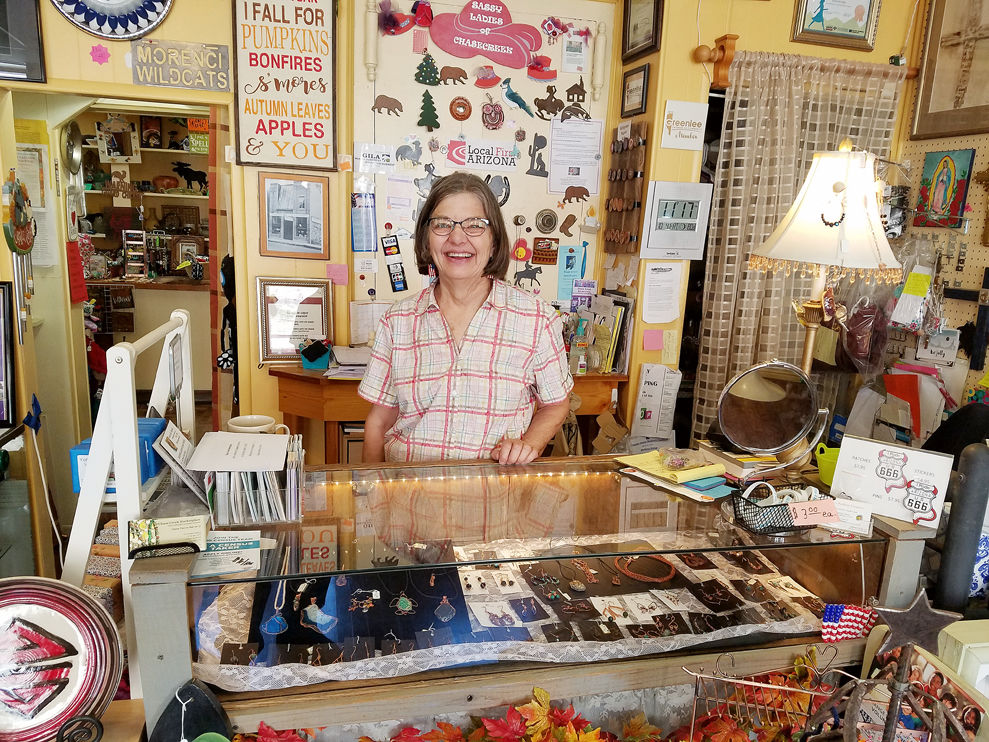 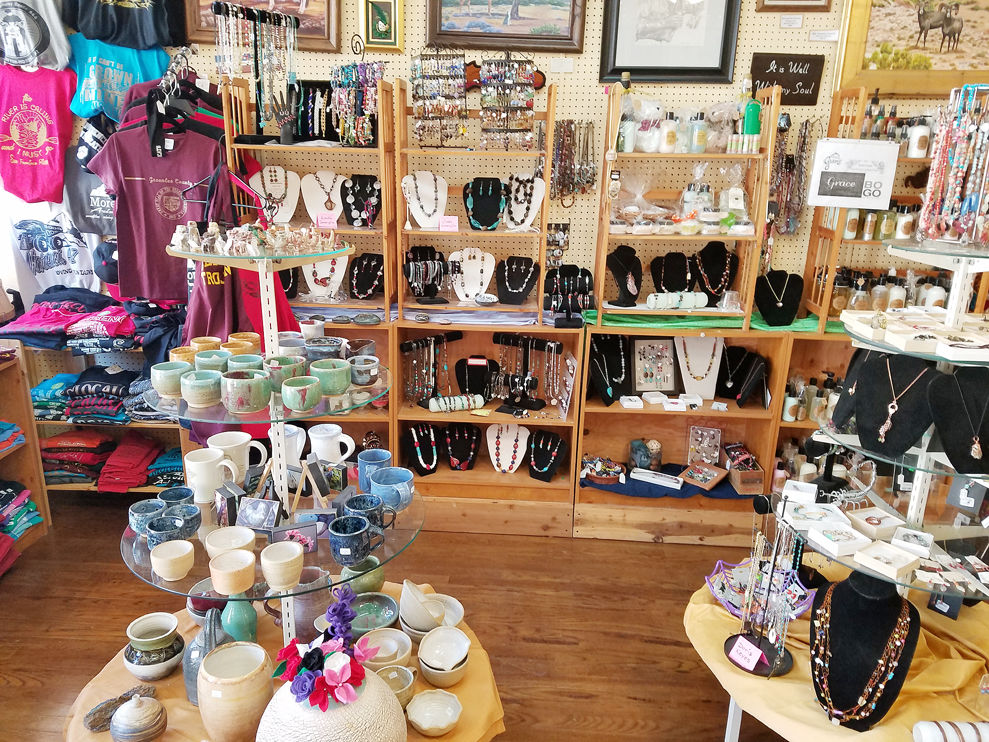 Chase Creek Marketplace features a wide array of functional art — handcrafted items that can be used every day. 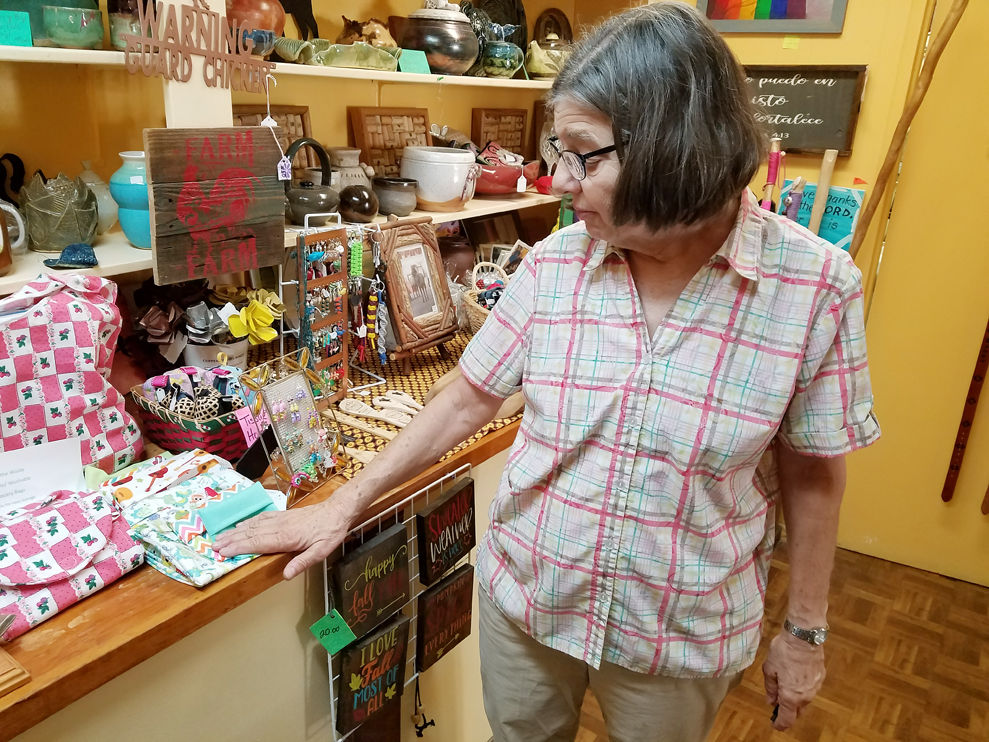 Susan Snyder explains that the items her store carries are handcrafted by local artisans.

Chase Creek Marketplace features a wide array of functional art — handcrafted items that can be used every day.

Susan Snyder explains that the items her store carries are handcrafted by local artisans.

CLIFTON — This week, one of the long-standing institutions of Greenlee County is celebrating its birthday on Chase Creek.

Snyder began her journey to becoming a small business owner after having previously volunteered for the Art Depot.

“It was a community organization at one end of the Train Depot. I was the one who would take kids on tours through the art exhibits. It was a volunteer organization, and we moved it to what is now the Blue Door Sanctuary. We ran out of volunteers, basically, after 10 years; and yet, there were all these artists that still needed a place to sell their materials. I’d been good friends with Charlie Fletcher, worked with him at one point; and when he died, three different buildings became available, and I purchased this one for retail sales of art,” Snyder said.

It was her desire to give a space to local artists in need of a store front.

“A place for local artists to sell their wares in between the craft shows we were having,” she said.

In her years of operating the Chase Creek Marketplace, Snyder has seen the comings and goings of a number of artistic mediums.

“When we first opened, we had 40 artists. We thought we were really big. We had made the decision from the beginning that it was going to be more than just paintings and pottery. We included things like the jewelry, fabric art, weavings and assorted things,” Snyder said. “What I found over the years is that we had a lot more artists than I had any idea. We’re now up to number 253. Not all of them have continued. Some have moved out of the area, some have died, and others have lost interest and moved on to other things. There is a great talent base here in Greenlee County and including parts of Graham County. There’s a real interest in the public for handcrafted unique merchandise. Everything is one of a kind, pretty much.”

What Snyder offers is art and an authentic experience. Her business, like many others on Chase Creek, is in a historic building.

“The main room was built as a single-story barber shop at the turn of the (19th) century. So we’re looking at a building that’s probably 130 years old. The upstairs was probably added around 1905,” she said.

What was once the heart of the business scene in boom town Clifton remains the heart of the historic business district, with the Marketplace representing roughly 50 local or locally connected artists. Her customers are drawn to what she calls functional art: T-shirts, jewelry, shelf art and embroidered towels, things that see use in everyday life.

“I have sold so many of them. Clifton High School closed several years ago but, because most of the families still have roots here, I sell two to three Clifton Trojan items for every . . . Morenci Wildcats items, but I do carry both,” she said.

With 15 years under her belt and looking to the future, Snyder sees herself encouraging future artists to be creative with their art.

“Whether it’s refurbishing something old or doing something new. My youngest artist was in second grade when she started, and she’s still with me now. I just want to continue to encourage artists to be creative and make it available to the public,” she said.

On Saturday, Oct. 12, from 10 a.m. to 6 p.m., Chase Creek Marketplace will celebrate its 15th anniversary with a storewide sale on items and refreshments all day long, and special activities beginning at 4 p.m.