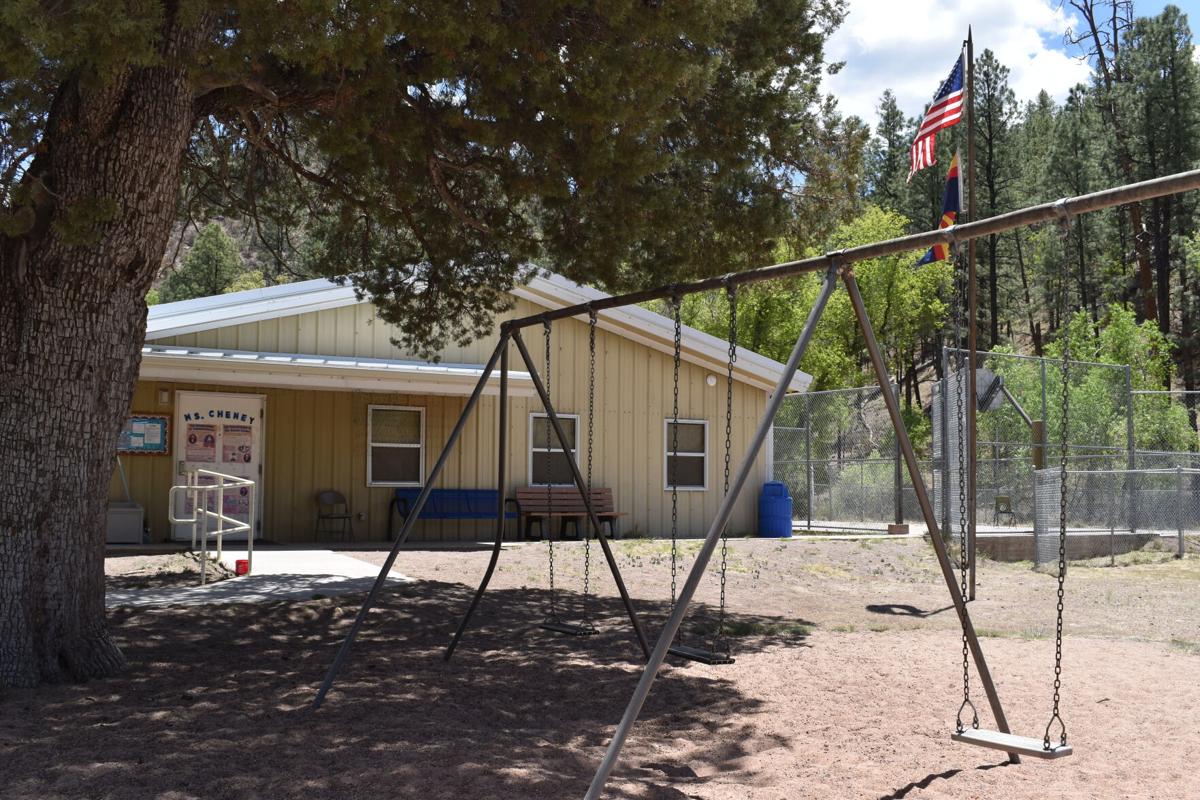 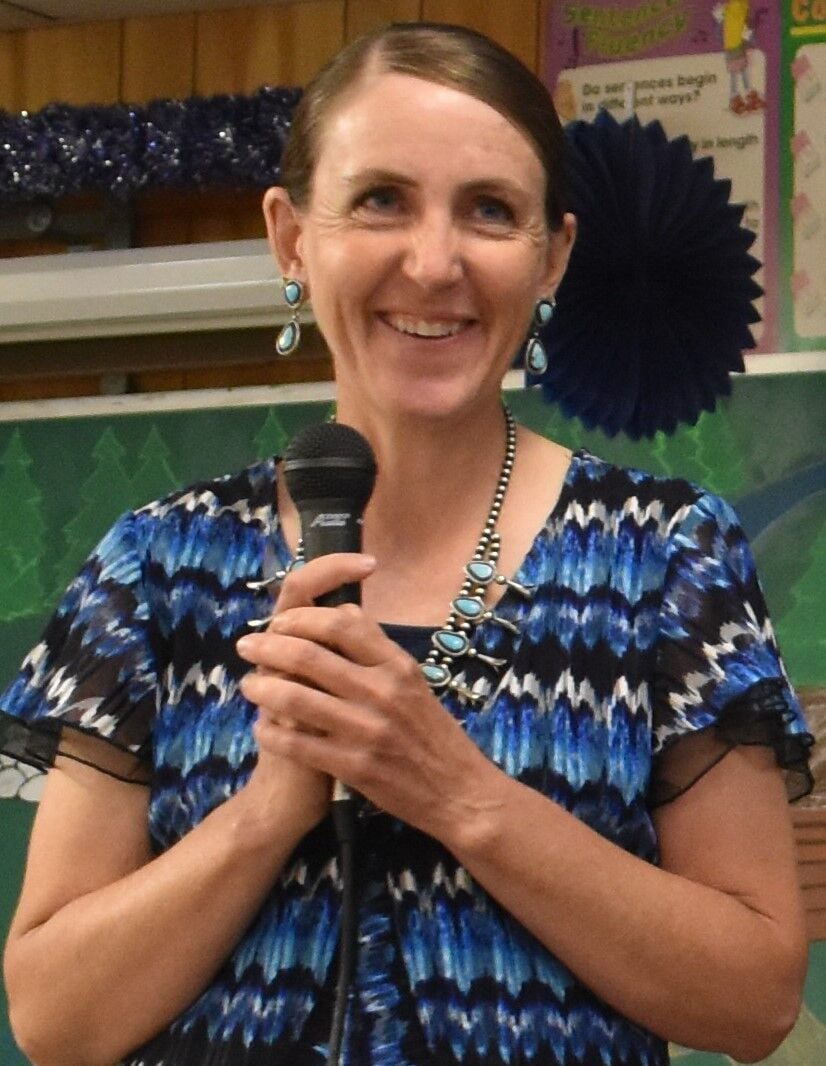 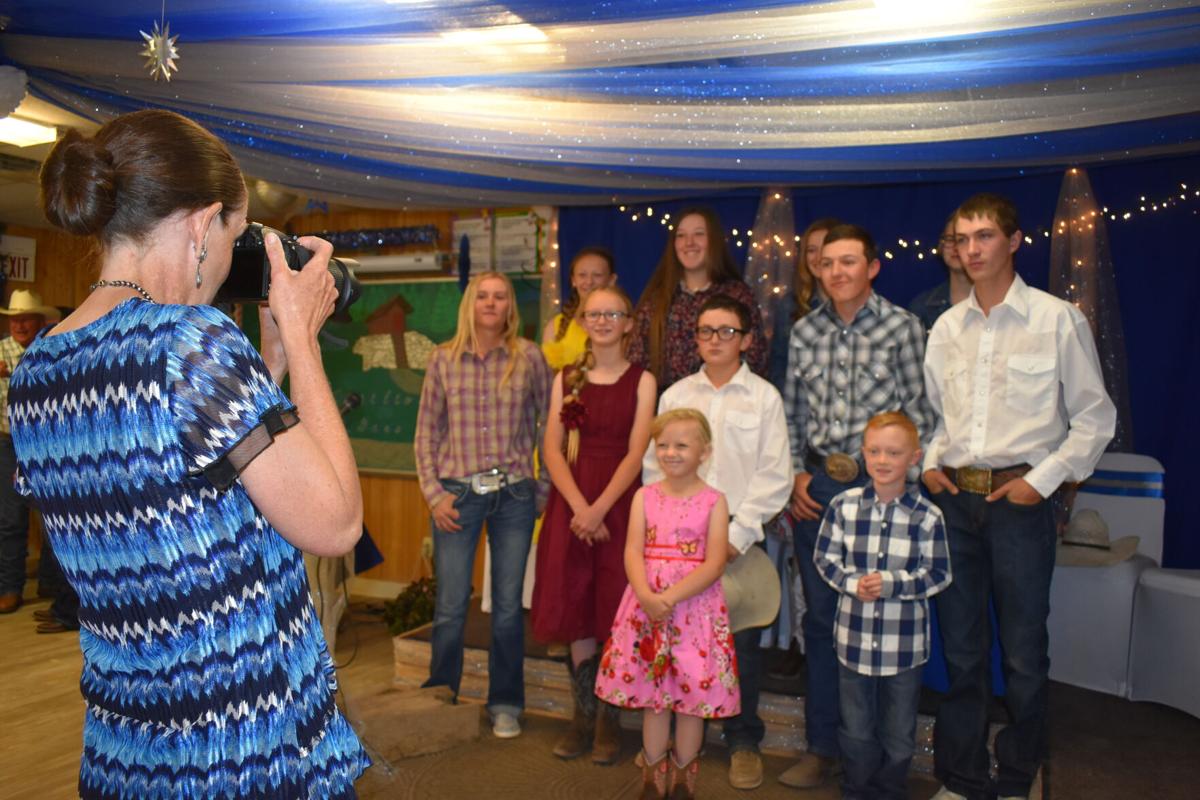 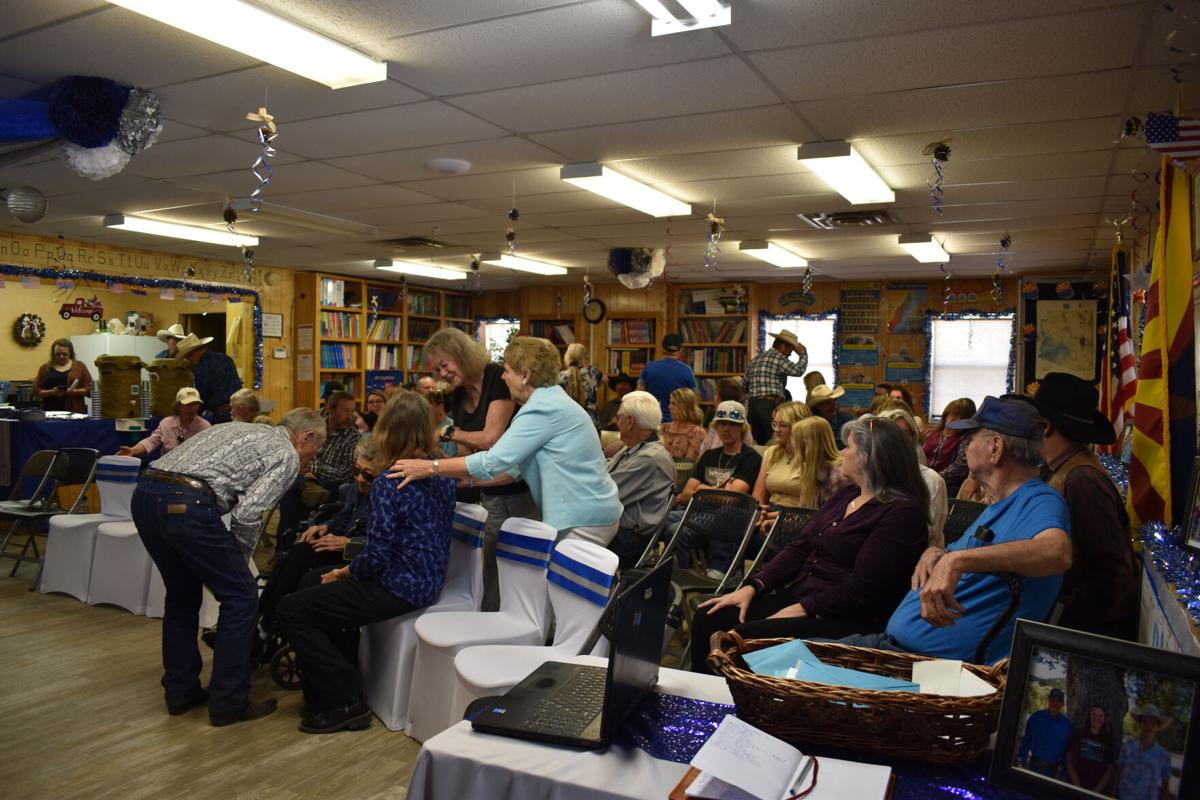 Blue, Arizona's one-room school house filled to the brim with community members for an eighth grade graduation ceremony in May. 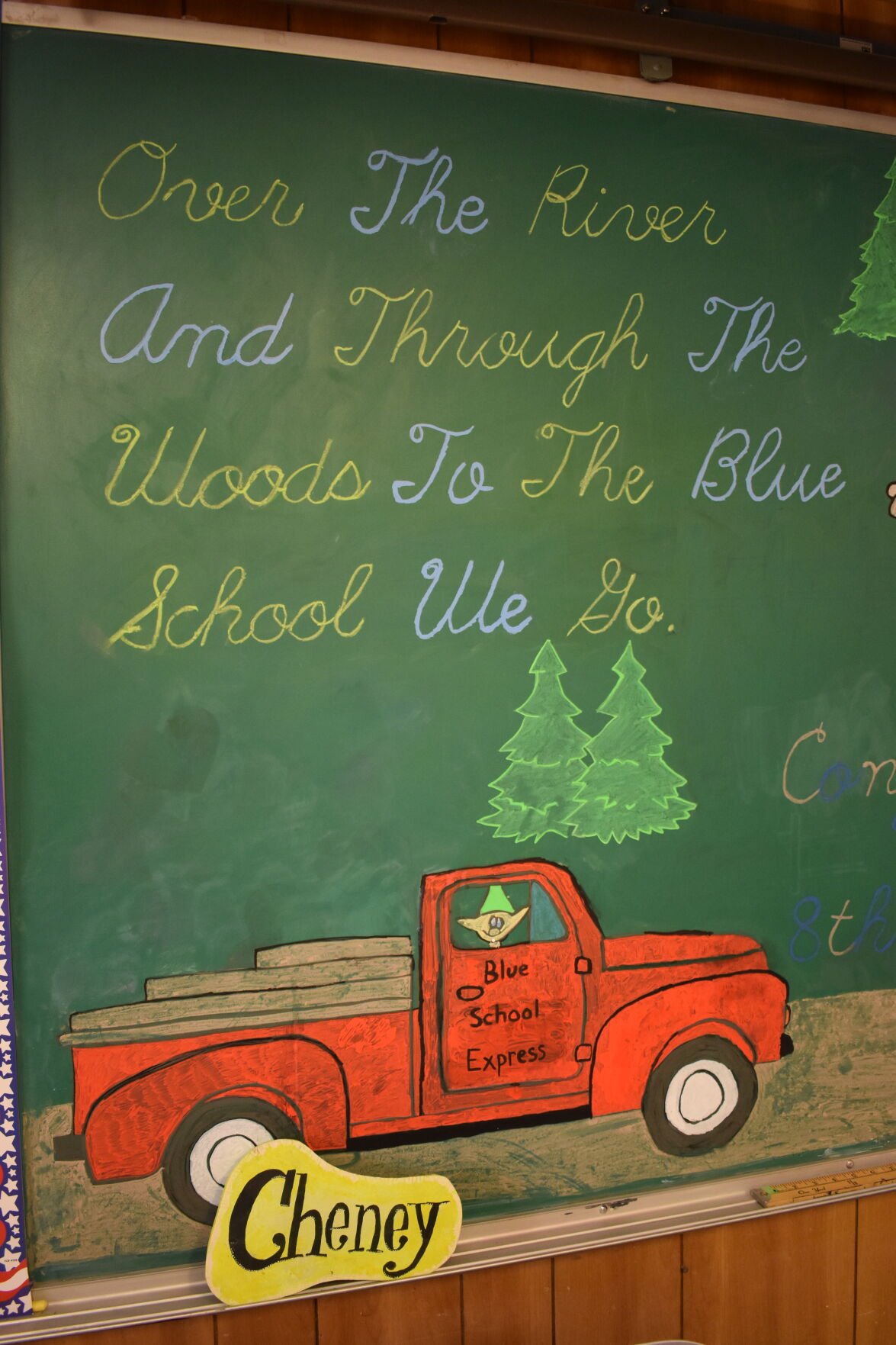 Blue, Arizona's one-room school house filled to the brim with community members for an eighth grade graduation ceremony in May.

Every day after school when Ginger Cheney’s sons pile into her pickup, she asks them the same question thousands of moms ask their kids. “So, how was school?”

The question never fails to elicit loud groans, Cheney says with a laugh. Because in addition to being their mom, Cheney happens to be their teacher, too.

When school is in session she and her aide, Kym Johnson, are responsible for educating 10 students, six of whom are related to Cheney. She not only teaches her two sons, she teaches her brother’s four kids as well.

Before coming to what locals call “the Blue,” Cheney spent 15 years in Eagar teaching English to classes filled with two dozen or more eighth- and 10th graders.

Was it a shock coming to a one-room schoolhouse 90 miles from the nearest city and three hours northeast of the Greenlee County seat of Clifton?

Cheney and her brother, Dusty, attended the school back when it was just a K-8. When they were in high school, they took a bus from Alpine (an hour north from Blue) to Round Valley High School in Eagar or stayed with their grandparents in Eagar.

“I’m the first person who went to the school as a student and came back as a teacher,” Cheney, 42, said.

Life brought Cheney back to the Blue and an aide position just happened to open that year.

Pretty soon she found herself working with Sally Hulsey — the teacher who taught her from third through eighth grade. Hulsey retired two years later.

Once she came back to the Blue, Hulsey helped her get used to teaching in one room filled with kids at so many grade levels.

“She was able to give me a lot of hints on how to make it all work,” Cheney said. “I learned a lot by working under her on just keeping the classroom going.”

That’s not to say a one-room school house is chaotic. It’s not, Cheney said. The students are usually self-motivated and often the older kids will help the little ones without any prompting.

“We do history and science and certain things together, but then there are things they can do on their own,” Cheney said.

She and Johnson, who came to the Blue from Greer at about the same time, have their days down to a science with the students spending time working on their own or rotating between the two women.

The school in Blue has to live up to all of the same Arizona Department of Education standards as any other school in Arizona, Cheney said. What makes it different is how they blend real-life experiences into the curriculum.

The students have been known to pick raspberries and make jam for local veterans, they’ve made and delivered pies and bread. They’ve also caught wild turkeys with the Arizona Department of Game and Fish, participated in a road cleanup project and visited the U.S. Forest Service’s Ranger Station. They also built their own graduation stage.

Cheney’s Instagram page is filled with photos of her students participating in every conceivable ranch-related activity there is. Her son has helped deliver, or “pull,” a calf, and they’ve seen the effects of the Wallow Fire.

Most city kids don’t get into the kitchen unless they go out of their way to take a culinary class. Cheney’s students start helping out in the kitchen as kindergartners.

“It’s great because we had one recipe that we had to double so we had the first-graders do all of the math for that recipe because it was just doubling,” Cheney said.

While baking bread was great fun for everyone, it went much deeper than that, she said.

“Yes, they learned a great old recipe from one of the matriarchs of the river, but they also learned about the chemistry behind it. Why does it work? Why does yeast need sugar and all of those different things. It’s real life,” Cheney said.

When you live in such isolation in a community of less than 60 people, Cheney said her students know first-hand there’s more to life than just tests.

“They know life and death like as far as having to pull the calf, if they hadn’t pulled the calf the calf would’ve died, the mother would’ve died,” Cheney said. “They know reality, not just video games and not that they don’t have their technology, but they know they have to get up and feed their animals and do their chores.”

Johnson agreed, they know not to “mess with the river when the water comes up” and which side to be on.

“These kids know where their food comes from...what’s on their plate where it came from and how to get it there,” Johnson said.

They are doing their best to teach their students how to be self-reliant.

Retired Greenlee County Schools Superintendent Tom Powers adores the community of Blue and still visits. He attended the school’s eighth grade graduation in May and praised Cheney and the students’ parents for raising the kids to have traditional values.

“It’s like stepping back in time,” Powers said. “The kids are respectful and they want to be there. They want to learn.”

Although she admits she might be “meaner” to her sons — 7th grader, Caden, and sophomore Colten and their cousins- than the other kids, Cheney said the reality is that all of her students are family. And, she does her best to help them achieve their goals — whether they hope to stay close to home or explore the world after graduating.

She couldn’t have a better job, Cheney said.

“I get the opportunity to teach my children. It’s almost like I’m paid to homeschool my boys and my nieces and like I said we’re all family or we might as well be. If they’re not at school together than on the weekends we’re branding together. Two weeks ago, we were all branding together,” she said.