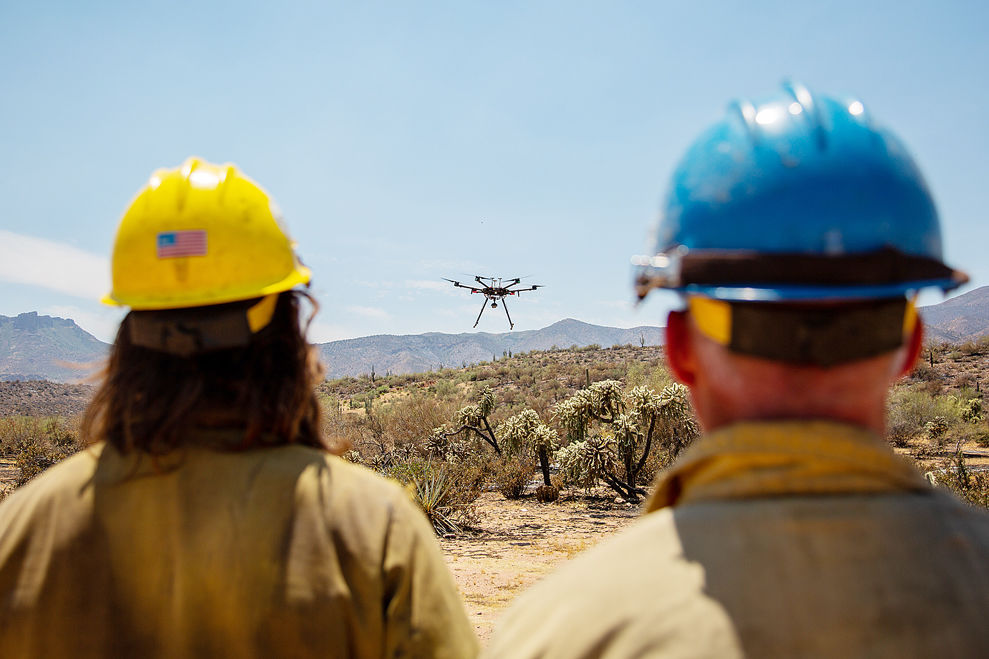 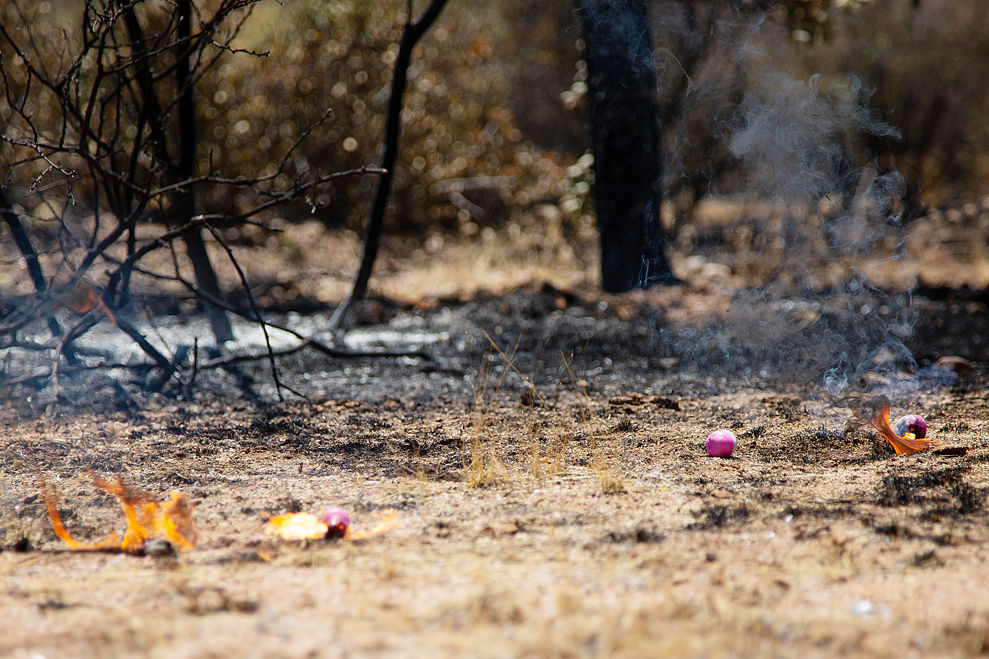 Drones can’t put out fires, but they can start backburns by dropping plastic balls filled with flammable liquids. 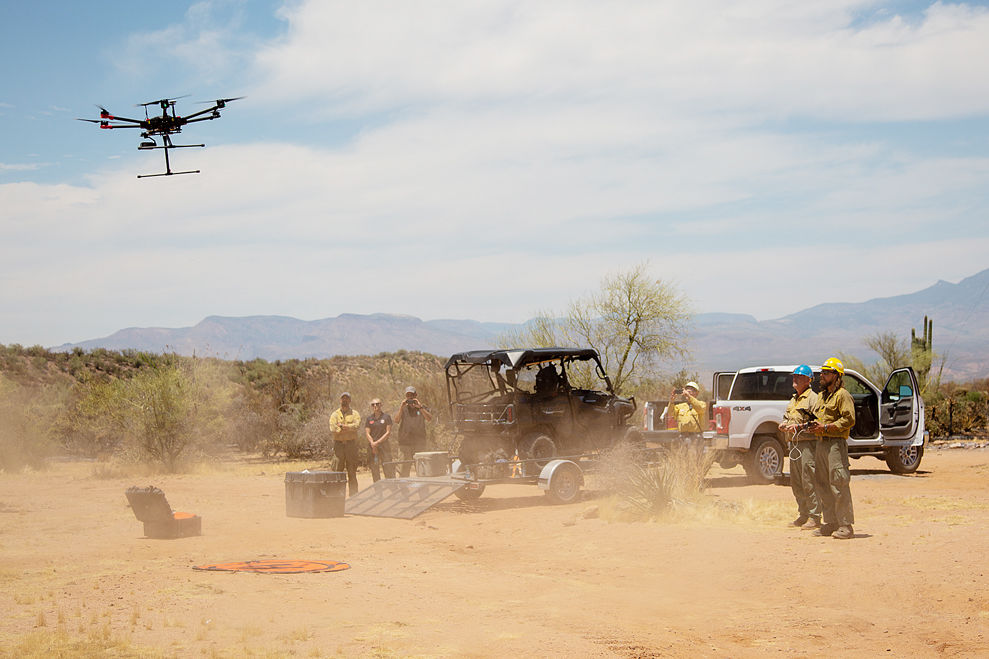 Chris Mariano takes a Matrice 600 drone for a test flight in June. Last year, the Bureau of Land Management had 531 drones and 359 operators in its service.

Drones can’t put out fires, but they can start backburns by dropping plastic balls filled with flammable liquids.

Chris Mariano takes a Matrice 600 drone for a test flight in June. Last year, the Bureau of Land Management had 531 drones and 359 operators in its service.

MIAMI, Ariz. — The whir of aerial drones provided a distinct soundtrack to the month it took to contain the Woodbury fire, which ranks as the fifth-largest wildfire in Arizona history.

The fire burned nearly 124,000 acres of the Superstition Wilderness and the Tonto National Monument, difficult terrain that made putting firefighters on the ground a dangerous move.

“Our main value is firefighter safety and public safety,” said Dick Fleishman, a fire information officer for the Coconino National Forest. “We’re not going to put people in this ground where we can barely get them in and out of there.”

That leaves the creation of situational awareness, scale-mapping and infrared imagery to unmanned aerial vehicles, also known as drones.

In the past eight years, the number of federal drone flights has grown to 10,342 in 2018 from 260 in 2010, according to the Department of Interior. In Arizona, drone usage has increased by 184 percent in the past two years.

Justin Baxter, a drone fire operations specialist, and his three-man team flew a Matrice 600 (M600) during the Woodbury fire, which broke out June 8 about five miles northwest of Superior. The blaze is 100-percent contained, fire officials said last week, but it continues to burn; and certain roads and campgrounds remain closed.

“We’ve been doing a lot on this fire with infrared work just based on how rugged the terrain is,” Baxter said.

Many of his team’s missions involved assessing scorched land. The drone’s infrared and normal cameras allow operators to compare surface temperature as they search for hotspots, which can ignite new fires.

“The drones are not putting out the fires,” Baxter said. “Somebody still needs to go in there and put it out. But we can mitigate some of the risk, some of the exposure and identify areas of concern a little bit sooner.”

Although the drones can’t put out fires, they can start them. Attachable infrared cameras and plastic-sphere dispensers equip drones to ignite and monitor backburns, a firefighting tactic used to reduce flammable materials that could fuel an oncoming wildfire.

The dispensers drop what Baxter calls “ping-pong balls” filled with two chemicals that combine to set off small fires. The drones then monitor these fires as they burn brush, letting firefighters focus on other mitigation and suppression techniques during an active wildfire.

“Drones are a new technology that we’re trying to implement,” said Ryan Berlin, a mitigation and education specialist who was flown in from Idaho for the Woodbury fire. “We’re still in the infancy of the drones.”

As of 2018, the Bureau of Land Management had 531 drones and 359 operators in its service and provided support during earthquakes, wildfires, hurricanes, volcanic eruptions, animal migrations, and search and rescues.

According to the Department of Interior’s Unmanned Aerial Systems Program 2018 Use Report, the 10,342 flights in 2018 totaled 1,785 hours in air, a more than 100-percent increase in both flights and hours in air from 2017. These flights occurred in 42 states and at least two territories, with more than half of them in Hawaii, Oregon, Alaska, Colorado and Idaho.

Arizona had the eighth-highest number of drone flights in 2018, with 570. Although statistics for 2019 won’t be available until the end of the year, drone usage in Arizona is likely to have increased, as this fire season already has burned more land than in all of 2018, according to data from the National Interagency Fire Center.

At the end of 2018, President Donald Trump signed an executive order promoting Interior’s search for new wildfire management, mitigation and suppression techniques. One of the provisions called for agencies to “maximize appropriate use of unmanned aerial systems” — drones, or UAS — in wildfire fighting and recovery.

With support from the White House and data showing increasing interest in federal drone usage, Baxter looks forward to seeing the program grow.

“I hope that this tool is just like the chain saw. You’re going to have the EMT that carries a first aid kit, the sawyer that carries the chain saw and the UAS pilot that carries the UAS,” Baxter said. “Instead of exposing a helicopter pilot to a recon flight or a captain of a crew to hike a ridge nobody’s ever been up, give them the tools to make their job just a little bit safer.”