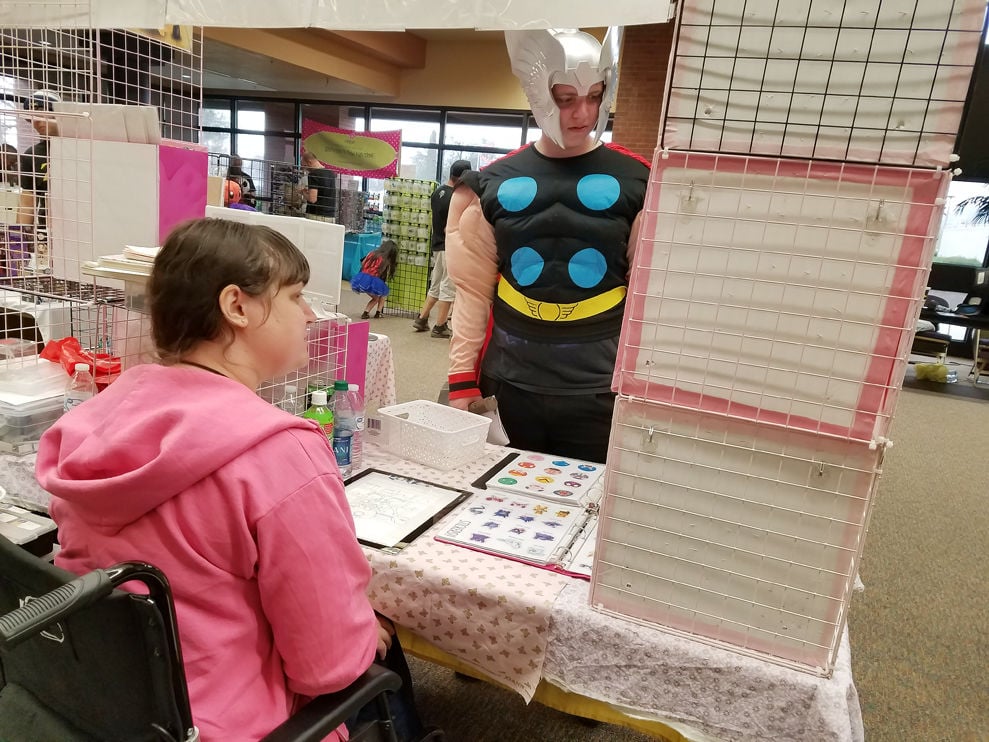 “The Mighty Thor” enquires about a commission from Eliza Bohnen at last year’s Gila Valley Comic-Con. 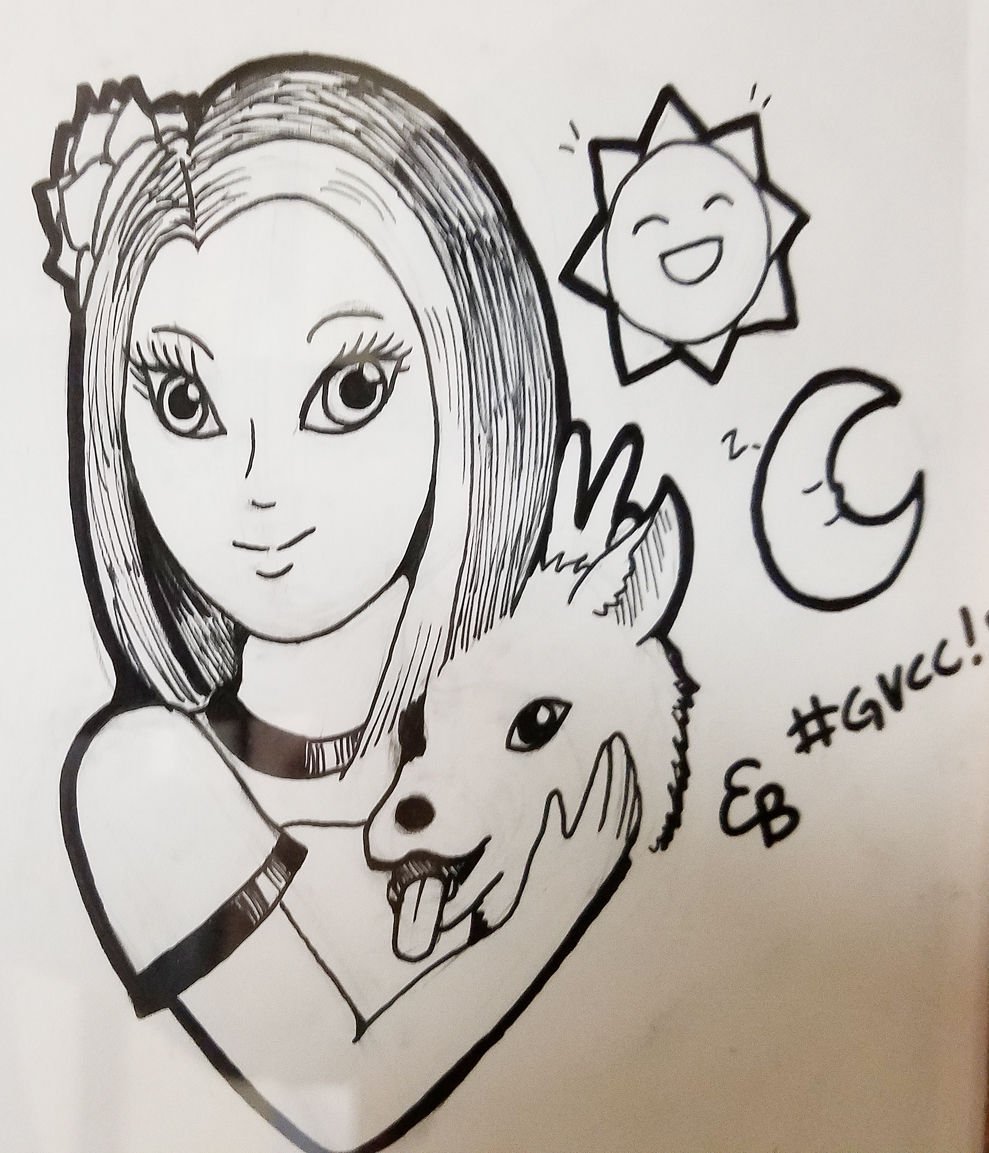 A commission completed by Eliza Bohnen during the 2018 Gila Valley Comic-Con.

A number of artists and comic book creators will attend Gila Valley Comic-Con, March 22-23, on the campus of Eastern Arizona College.

We reached out to artist Eliza Bohnen to learn a little bit more about her and her process.

Q: Please tell us a little about your background in comics/art, projects you have worked on and projects you are currently working on.

A: I’m a self-taught artist, which is to say that I learned to draw through my own motivation and sought out sources in books or online instead of learning in the classroom. In some cases, these alternate sources worked better for me — I didn’t understand one-point perspective when it was taught to me in high school, but when I found a tutorial on drawing video game backgrounds on the internet, it clicked — and in some cases, it was simply lack of access to formal classroom environments.

I don’t know that I could explain where my motivation to create artwork comes from, as I’ve been drawing since before my earliest childhood memories and it has always been something I simply must do. I drew casually throughout my childhood and decided to take things more seriously — like seeking out critique to improve my understanding of what I was doing — in my late teens.

I think only recently I’ve had the discipline for anything you could call a “project” (as opposed to a single illustration, for example). Last year, I finished a Pokemon-themed tarot deck, which was possibly my first big project that I saw to completion. At the time I began the project in 2014, I had definitely hit a hard slump in terms of my original work and decided that doing a fanart project would at least make sure I didn’t let my drawing skills slide. And because the deck was illustrated in full color with every card having a completed background, I wound up really sharpening my skills at drawing nature, scenery and working with dynamic lighting. I’m currently working on illustrations for a card deck. The Japanese “Hanafuda” decks, a 48-card playing card deck with cards depicting scenes of nature, was my inspiration. I’ve been illustrating plants native to the Southwestern U.S. and Sonoran Desert, and the deck will be usable as both a Western 52-card deck or a Japanese 480-card deck.

I’m definitely drawn to the idea of doing comics or other sequential art projects, but due to my disability, there’s a limited amount of stress I can put on my hands and arms, so while I’ve attempted projects like that in the past, they haven’t come to anything because I haven’t felt like I could keep up with the necessary pace.

Q: What is it about the medium of comics that attracts you versus the fine arts fields, such as painting or sculpting?

A: I came into art more admiring fantasy-style illustrations than comics (but I wasn’t really allowed to have comics as a child until I started buying translated manga in my early teens), but I think what I can say about comics, fantasy/sci-fi illustration and art meant to tell stories is it feels like there’s a lot less gatekeeping. I appreciate a lot of fine artwork, and while my style isn’t realistic, I still think there’s a lot I can learn from the field of fine art.

But at the same time, there are a lot of people within fine art who would tell someone like myself, an illustrator, that I’m not a real artist and my drawings aren’t real art. In my experience, on the comics side, maybe someone would tell me that my artwork isn’t very good, but far fewer people would ever tell me that my art isn’t art. And even though not every comic book or piece of fantasy art appeals to me, I would never say to someone else that their art isn’t true art either. I think “art” comes from intention, so if someone intended to make art, they made art.

Q: What are your thoughts on writer/artists? What does writing your own stories do for you in terms of your design process? When you work with a writer, do you prefer co-plotting, being given the plot or working from full script?

A: While I haven’t successfully completed a comic myself, and I’ve only worked in artist/writer relationships in terms of failed webcomics in my teen years, obviously I have a lot of experience with drawing and I have also completed a few novellas over the years. What I can say is that my experience, having been on both sides of the writer/artist divide (but never in a professional setting where either of us was being paid to do so), is that I don’t enjoy relinquishing complete creative control to the writer if I’m the artist — I definitely want to have a say in the story, if not write the whole thing myself.

And when I tried it in the past (and this, of course, speaks only to my own experience) a lot of the projects fell through in part because the writer was doing a lot less work than the artist — the artist could draw two or three pages, perhaps, in the time it took to write the script for the entire chapter. I think it might not be so bad to be the writer in this sense if I was writing for several projects, all with different artists. But again, this is only my small experience and, obviously, I don’t have any industry experience when it comes to these things.

Q: Do you prefer to craft your art “old school” with pencil and ink, or have you transitioned to digital via tablet? Why?

A: I use traditional media almost exclusively. I’ve used tablets many times, but I’ve never liked the feel of them, and while I know tablets can now replicate a lot of things they couldn’t before — such as rotating your “paper” and better portability (laptops/tablet PCs with touch screens mean you’re not tethered to your desk), they don’t feel organic to me; and after working for several years on coloring styles that appealed to me, my traditional style blossomed and I couldn’t ever make myself satisfied with what was on the computer screen.

That said, were I ever to attempt making a comic book again, I’m sure I would lean on digital tools a lot more than I normally do for the sake of saving my wrists a lot of pain. There are a lot of shortcuts (and I’m not saying that pejoratively) one can do on a computer that one can’t do with pen and paper — though you’d be surprised; I can accomplish a lot more with only traditional media than many might think!

Where: Hoopes Activity Center on the campus of Eastern Arizona College

How Much: $5 per day, $45 VIP, EAC students admitted free with current student ID

Q: Social media and digital have made it easier to get your work in front of potential fans and buyers, but they have also created a very full field of creators competing for attention. What are you doing to get your work noticed, appreciated and purchased?

A: Honestly, like you said here, social media has created a very full field of creators. Given that, and bizarre algorithms on many social media platforms (often if you’re not paying them to boost your posts, people aren’t seeing your posts), I would not say I’ve had success online or on social media.

The way I get my art in front of people is to participate in conventions and art shows. I’m under the impression that people who are successful online spend a lot of time building their personal brand, using the right tags/hashtags and even soliciting people personally to look at their pages.

I’m disabled due to having several rare diseases, so I just am not able to put that kind of time into self-promotion, especially when I want to save my energy for my work.

Q: It seems almost every creator-owned work today is formulated as both a comic and a movie/TV pitch. What are your thoughts on the current fascination with comic book properties in film and on TV — will it last or do you see another trend taking its place (and if so, when)? Do you see your work making the transition to the screen, or do you want it to remain exclusive to comics?

A: The comics I like aren’t often from the big superhero comic publishers in the United States — I read a lot of indie comics, webcomics and manga — so the current trend hasn’t caught much of my interest (though I did see “Into the Spiderverse,” and that was one of the most visually stunning movies I have ever seen).

I think the current wave won’t last forever, but I think it’s something that’s going to continue rising and falling. I think a lot of people will get bored eventually, as they’d do with anything, but these comic properties have more than proven their staying power, and I wouldn’t be surprised that, after another decade or two, they explode back into the movie scene. I think that I, like most creators, would be excited and flattered to see my work adapted to screen, but I’m not holding my breath.

Q: Tell us about the project(s) you are currently working on, and where can people purchase your work.

A: I’m currently working on my nature-themed playing card deck (as mentioned earlier), tossing around the possibility of attempting a comic again, and also have always really loved video games and am attempting to work on an adventure game.

My website is www.lampflower.net, and it’s the hub for all of my work, including my online store. I have lots of illustrations and other works for purchase.