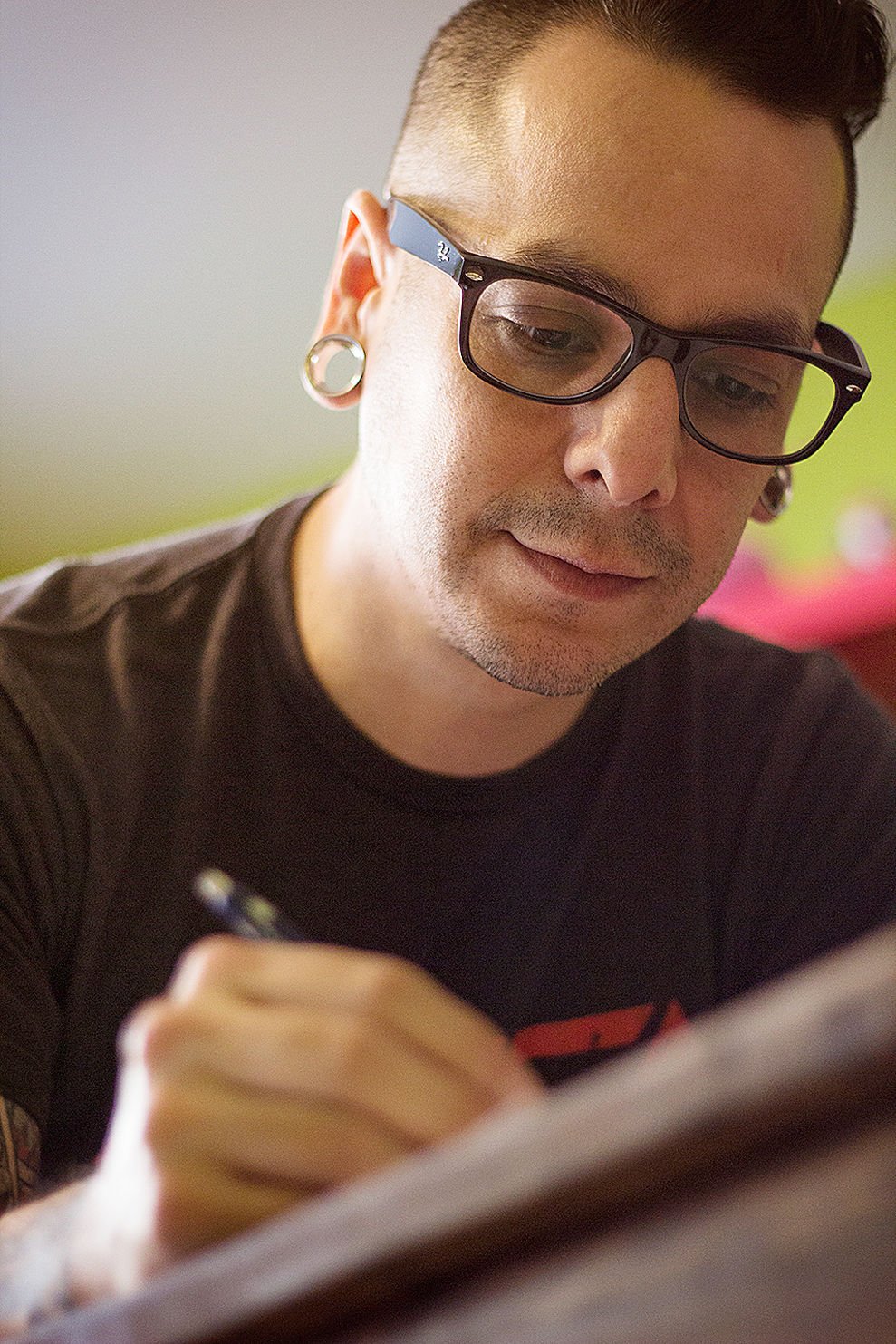 Writer-artist J Gonzo will be have copies of his self-published comic, “La Man del Destino” and other artwork available at Gila Valley Comic-Con. 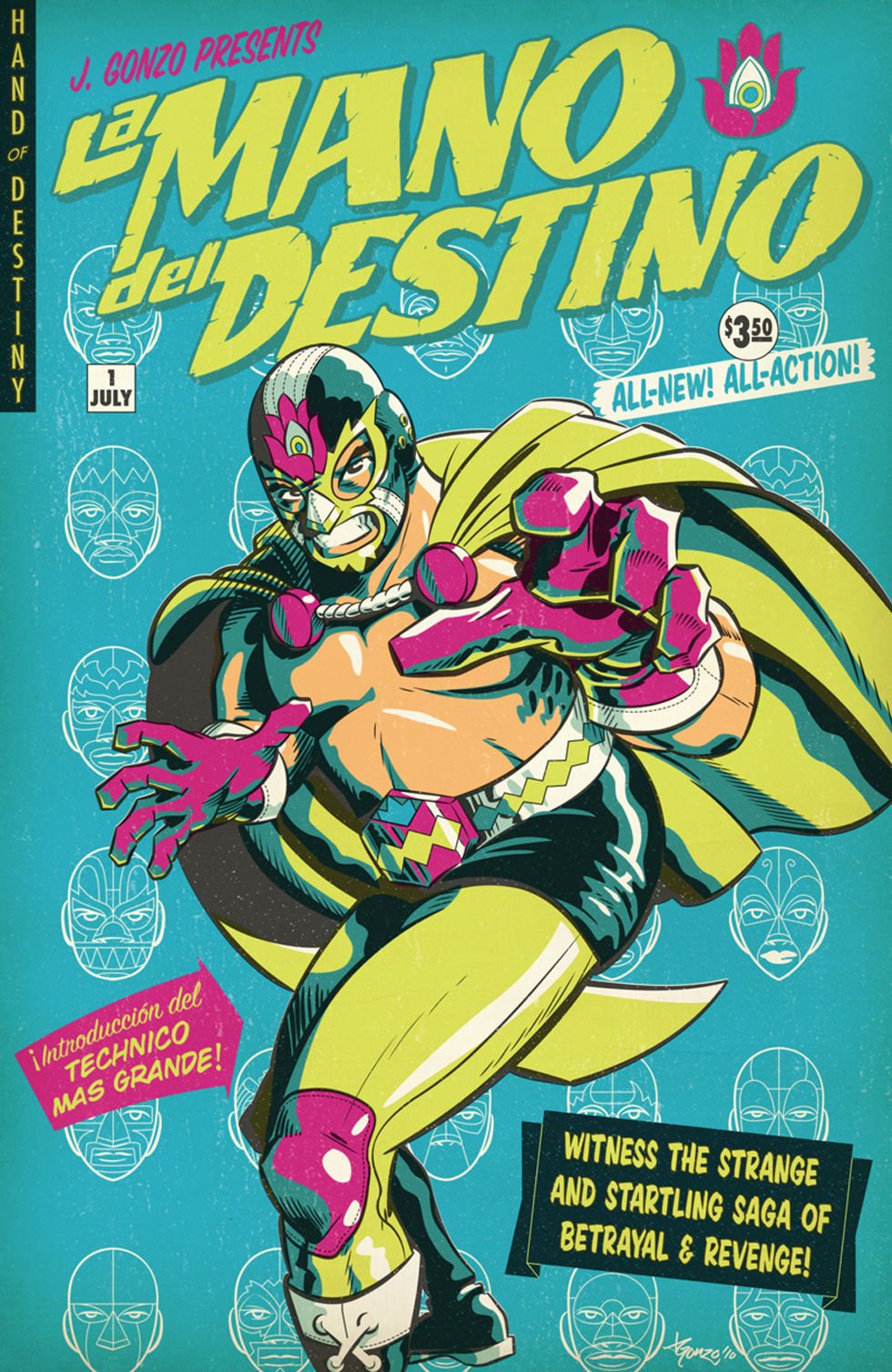 A number of artists and comic book creators will attend Gila Valley Comic-Con, March 22-23, on the campus of Eastern Arizona College.

We reached out to artist J Gonzo to learn a little bit more about him and his process.

Q: Please tell us a little about your background in comics/art, projects you have worked on and projects you are currently working on.

A: I have been a visual artist my entire life. In California, I attended the Orange County High School of the Arts’ Visual Arts program and then earned my degree in graphic design. I did freelance graphic design and illustration while apprenticing and then working full-time as a tattoo artist until I entered the world of advertising as a creative.

I left agency life to work in-house for Todd McFarlane Productions for four years and shifted my creative focus to comics. When I left McFarlane in 2008, at the urging of some editors and other comics professionals, I decided to self-publish my own comic. To date, I have self-published five issues of “La Mano del Destino” and have done art for a chapter and a half of “La Voz de M.A.Y.O.: Tata Rambo” for Top Cow. I have also contributed art/pinups to “Hip Hop Family Tree” and “The Guild” and a few other random comics whose names escape me.

Q: What is it about the medium of comics that attracts you versus the fine arts fields, such as painting or sculpting?

A: I am most attracted to the narrative and format possibilities of comics as a medium. The episodic structure of individual issues and the design of each two-page spread (whether they are utilized as spreads or individual pages) present contained narrative opportunity to explore the format at each juncture.

That is to say, I can create story in whatever panel count, panel composition, and layout design I want on each page with or without respect to pages or even the issues that came before; a painting will only ever be the shape of the canvas I stretch and a sculpture can only be as large as the slab I start with. Even film, with its narrative possibilities of movement and sound, is bound by its aspect ratio and that it can only show you a single frame at a time.

Comics can show you frames within frames and their relation to each other simultaneously to be seen all together or individually. Also, comics ask a lot of the reader; the characters are voiced by each reader in their own mind and the movement of action happens between panels within the reader’s head as well. We create an abbreviated reality that the reader completes with their own experiences and suppositions The reader co-authors the story with you in a way that is completely unique and personal to them. It’s a powerful medium that is constantly revealing new possibilities.

Q: What are your thoughts on writer/artists? What does writing your own stories do for you in terms of your design process? When you work with a writer, do prefer co-plotting, being given the plot or working from full script?

A: I think there is a lot of good work being done in comics by a lot of talented people. I try to not think of the industry as “The Industry.” Notions of this business as anything more that a ragtag group of freelancers just trying to pay bills with the skills they have can be harmful.

The Big Two have are juggernauts that have obligations and considerations that I cannot (and don’t desire to) fathom, but the people they employ are trying to do the best they can within the structure of those systems, so I won’t disparage any work that comes out of those machines.

I think all peoples working at every level of comics have different objectives and intentions, so, when I think about other artists or writers, I tend to only think in terms of my personal enjoyment as a matter of taste and not of inherent value. And, there is so much good if you just go looking.

Writing my own book allows me to work faster with a lot more shorthand between steps. I know the emotional weight and importance of each moment and don’t need to spend time conveying this information to my writer. I can work and re-work thumbnails to maintain the emphasis and pacing I need without having to send them to a writer or editor for approval. In planning, I can also “show” as much of the story as possible so that I needn’t “tell” with dialogue later. Since I am also the writer, I don’t fall in love with my words if a visual solution will suffice.

I prefer to co-plot with a writer when I do work in collaboration with one (mostly to offer-up visual solutions and prevent the writer from describing impossible scenarios), but I do enjoy a full script for its ease on occasion. I’m a hired wrist at that point, but I will do my best to suggest and solve any narrative issues if they arise.

If I work from plot only, I try to ensure that the writer knows that what they will receive back from me may not be entirely congruous with their mental image of the book. This scenario requires a lot of trust, or so little time that second-guessing isn’t an option.

Q: Do you prefer to craft your art “old school” with pencil and ink, or have you transitioned to digital via tablet? Why?

A: I need to thumbnail and pencil onto physical paper for its consistency of size — zooming in and out of a digital artboard can veer me into overworking small areas or under-working broad ones. Being able to hold a page up to the light or a mirror in a moment, to reverse it in order to inspect for proportion or scale issues, is a benefit of the psychical paper as well.

Once I pencil a page, I do sometimes ink on a computer, but some projects I still ink with nibs, brushes, marker and pencil — it all depends on the look I want.

I always color on the computer though; all comics go from digital to production now. Even if the printing is offset lithography, and not digital, the plates are burned from digital files and no longer from stat cameras and PhotoMechanical transfers or film, so getting the artwork into the digital space has to happen and coloring digitally allows for maximum control of that process.

I never use a tablet though, I only ever use a mouse. Most tablet art seems to be consumed by a “sameness” that I cannot sanction.

Q: Social media and digital has made it easier to get your work in front of potential fans and buyers, but it’s also created a very full field of creators competing for attention? What are you doing to get your work noticed, appreciated and purchased?

A: I mostly just try to do good work and let the work speak for itself. I mean: the ethos of my work is personal and authentic, as I believe the public can smell a crass money-grab from a mile away, but I don’t have a marketing strategy for my work other than to make it as good as I can possibly create on the day I create it.

I do have social media accounts, but I never invite people to join a group or be a fan via the purchaseable options within those platforms — I try respect people’s time in their social media spaces as a marketing-free zone (from me at least).

I do reward the fans who follow me on social media with a “secret handshake” type access to some of the work I produce; it is just for them as a “thank you” for their support. I can’t go in to details, but they know what I mean.

Where: Hoopes Activity Center on the campus of Eastern Arizona College

How Much: $5 per day, $45 VIP, EAC students admitted free with current student ID

Q: It seems almost every creator-owned work today is formulated as both a comic and a movie/TV pitch. What are your thoughts on the current fascination with comic book properties in film and on TV — will it last or do you see another trend taking its place (and if so, when)? Do you see your work making the transition to the screen or do you want it to remain exclusive to comics?

A: I think superhero comics have transcended the limitations of being merely Hollywood trend into being a full-fledged genre (like Westerns) at this point. Though, I bristle at the notion of “comics” being a genre, as comics are a medium that contains myriad genres — “Ghost World” and “Hellboy” being considered the same “type” of movie because their respective source media were the same, is as ridiculous an idea as “Frankenstein” and “Eat. Pray. Love.” being the same because they were both books once.

I think the current interest is a result of studios noting the depths of genre types within the medium of comics and having the ability, and technological capacity to explore the breadth and depth of a medium that was previously untapped. It’s an entire library of ideas, realized in a visual and sequential form that has gone under-developed in film for 80 years — of course Hollywood is interested.

As for specifically “superheroes” as a trend or genre, I think they’ll stick around, though wax and wane like Westerns in perpetuity.

As for my comics, I have had some vague and general interest in my comic as a movie, live-action or animated TV show at various times over the past several years. When I do meet with various studio types, I tell them all that I am not so enamored with doing a Hollywood project that I will do any Hollywood project. I created my comic because of general dissatisfaction with the way certain subjects and peoples were being handled and represented by committee-steered, Hollywood projects; so I am not about to hand my personally-created counteraction over to them to be corrupted into a project akin to those I railed against.

This sentiment hasn’t made me many friends in Hollywood and, as of now, there is no “La Mano del Destino” in the works, but I’m content with that; my creation isn’t a part of the problem, it’s still exactly what I want it to be.

Q: Tell us about the project(s) you are currently working on, and where can people purchase your work.

A: Right now I am finishing the last, double-sized, issue of this ”La Mano del Destino” story arc; it (when it’s done), and the other five issues, are available at castleandkeypublications.com. I am hoping (and sort of on track) to be done by Free Comic Book Day.

I am also working on (with Henry Barajas writing) the next two chapters of “La Voz de M.A.Y.O: Tata Rambo” for Top Cow — you can Google the title for information on how to support and receive digital versions ahead of the printed ones.

I do have some other projects to announce soon, so, if you go to jgonzodesigns.com and follow me on social media, you can find out what they are when I announce them (and perhaps learn the secret handshake while you’re at it).