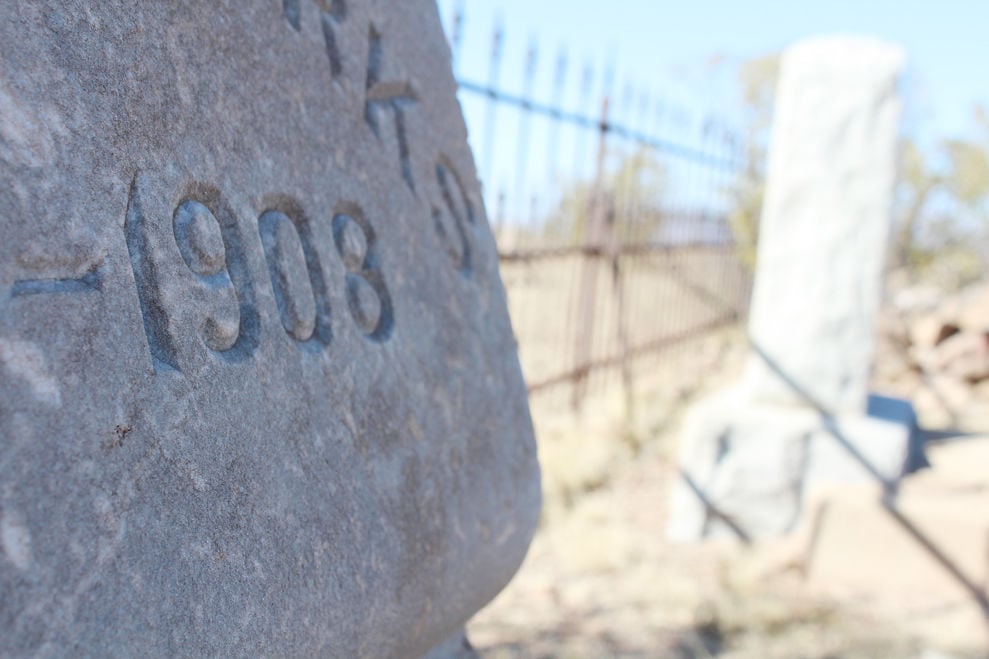 The Courier found a gravestone in the Solomon Cemetary with the year of death as 1908, but it did not belong to Gabriel Sainz. 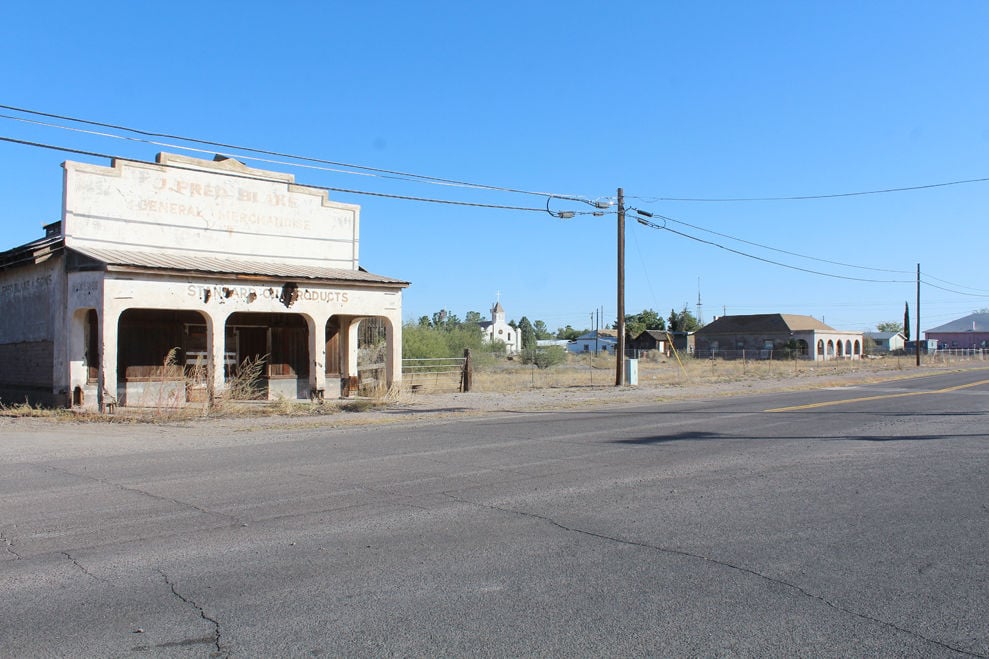 Beside the former site of the Solomon historic post office on South Bowie Avenue was where Jesus Sainz shot his eldest son, Gabriel. 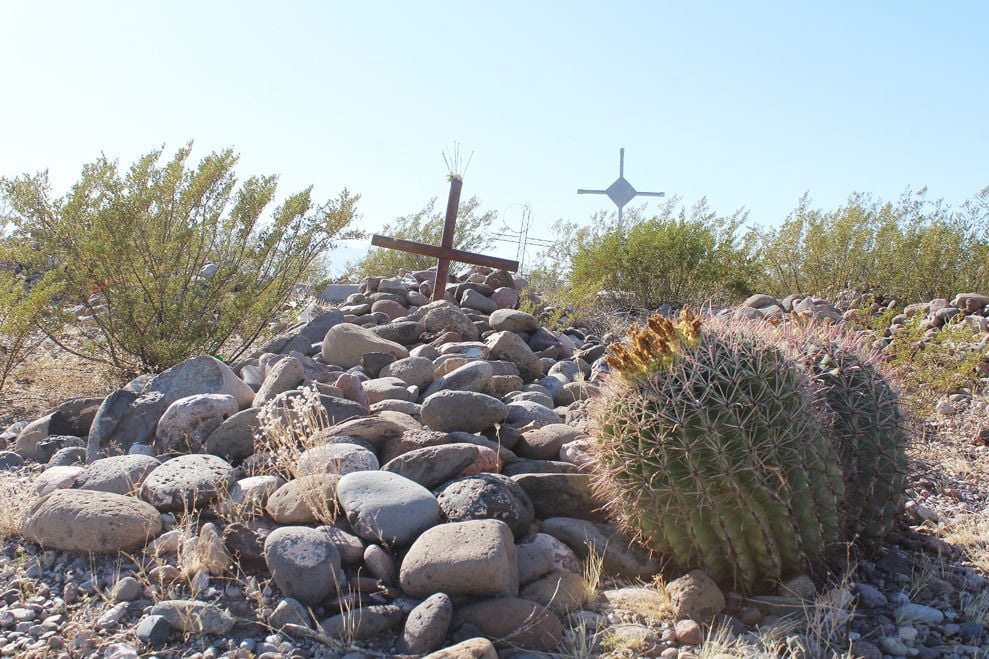 Graves of unknown occupants await eternity atop a plateau in the Solomon Cemetery.

The Courier found a gravestone in the Solomon Cemetary with the year of death as 1908, but it did not belong to Gabriel Sainz.

Beside the former site of the Solomon historic post office on South Bowie Avenue was where Jesus Sainz shot his eldest son, Gabriel.

Graves of unknown occupants await eternity atop a plateau in the Solomon Cemetery.

SOLOMON — More than 100 years ago, an alleged father-son love triangle resulted in a man killing his child in broad daylight.

The year was 1908 and Arizona would be declared a state four years later. The Graham Guardian newspaper was in its 13th year of operation. It was in February of that year that Jesus Sainz, 65, shot his own son over the affection of his new wife in the streets of Solomon.

According to the entry regarding the incident in “Murders, Hangings, Homicides, Lynchings and More in Graham County from 1877 to Present,” by the late Graham County historian Danny Haralson, Jesus and his son, Gabriel Sainz, 28, moved to Solomon from Mexico. Jesus married a comely woman named Carmen, 30, and the couple lived in the area together, making a larger family of daughters and sons.

“The happy family was disrupted when Jesus suspected his son, Gabriel, of making improper advances toward his stepmother. Infuriated, Jesus told his firstborn to leave Solomonville and never return,” Haralson wrote. “It was early in the afternoon of Friday last in Solomonville that a cold-blooded murder occurred. About two o’clock Gabriel Sainz, about 28 years of age, son of Jesus Sainz, drove into Solomonville with a load of hay to be loaded on a car at the depot.”

According to Haralson’s research, Jesus had warned Gabriel to stay away from Carmon before. However, Jesus later found the two together in the house while in a compromising position. Jesus beat Gabriel severely in this instance, threatening to kill his son if he didn’t leave town.

Gabriel initially left Solomon as his father had asked, looking for work in Safford and Thatcher. Thatcher was where he found employment under Miles Reay, who owned the Big Ranch. It was for Reay that he was delivering hay to the Solomon depot.

When Gabriel drove the wagon full of hay through Solomon, Jesus spotted him and returned to his house to retrieve his gun. According to Haralson’s report, Jesus knew that Gabriel would have to ride the wagon past his residence to get to the depot. Gabriel approached, but by the time he was close to the residence, it was too late.

“The young man, seeing his father armed, quickly realized his danger, and jumped from the wagon, seeking safety on the opposite side from where his father stood. The older Sainz rushed forward, chasing the son around the wagon. Finally, dropping on his knee, he fired between the wheels. The bullet went true to his aim, and the son dropped to the ground,” read the front-page article covering the incident in the Guardian.

Simultaneously, as Jesus shot Gabriel in the street, the school let the children out for recess. The school was on the same road as the incident, and the shot of Jesus’s gun caused excitement among the children. When the shot occurred, a large crowd gathered on the street, surrounding the victim and his father.

“Sainz chased his son around the load of hay and finally shot him dead. Then he sprang on him like a tiger and beat him with his fists and rifle,” wrote the Daily Arizona Silver Belt newspaper out of Globe, where Jesus was eventually brought to trial for the murder of his son the following Monday.

Gabriel lived for an hour after he was shot, and was awake and alert until he passed. During his final hour, Gabriel told those around him multiple times that although he could have shot his father he didn’t want to kill him. Gabriel was buried in the Solomon Cemetery the following Saturday. Toward the end of the Guardian article, later developments made the reporter question if the woman Gabriel was involved with was an entirely different individual.

The Daily Arizona Silver Belt newspaper on May 9, 1908, illustrated the trial as the local attorneys adapting “Dementia Americana” to their needs. The jury that tried Jesus gave a verdict of acquittal after being in session all night long. Jesus’ counsel used the defense of insanity.

The local historian, Danny Haralson, passed away in May, leaving questions unanswered as to his methods of research and whatever else he may have gleaned about the Gabriel Sainz murder. In an effort to find out more, the Courier contacted local historian Hal Herbert.

“There is nothing else. Nothing beyond Danny’s article. I can’t add anything to it, because there isn’t anything else in our files on it in the (Graham County) Historical Society. Other than Danny Haralson, I don’t think anyone did any research on it,” Herbert said. “Other than the article in the Guardian, there isn’t much else. I know Danny did research on the genealogy of the people on ancestor.com and a Google search.”

After researching the incident, the Courier visited the Solomon Cemetery in an effort to find Gabriel’s grave. Atop a plateau, the Solomon Cemetery remains, filled with many graves without headstones in the desert. Although newer graves are identified, many of the older graves are unknown. A single headstone read the year of death being 1908, but it wasn’t Gabriel’s. Many of the graves’ occupants are unidentifiable, and the only way to know if an individual is buried is due to the mound of river rocks heaped on the ground beside sage bush and cacti.

Without Danny Haralson’s research, the history of Gabriel Sainz’s murder would be hidden in the rolls of microfilm depicting the historical issues of the Graham Guardian in the Safford City-Graham County Library and state historical records.

Note: Following publication of this story on www.eacourier.com, a Sainz family member e-mailed the Courier to confirm that Jesus and Gabriel are buried together in Solomon Cemetery, along with Jesus’ brother, Mariano.