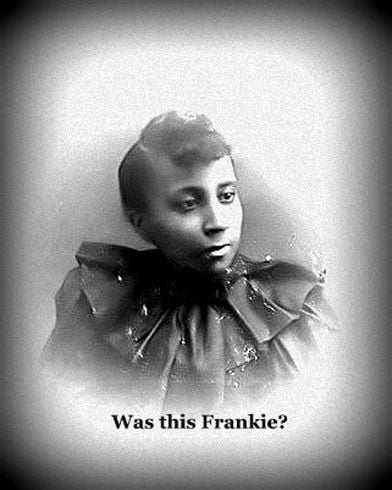 Was this Frankie Campbell? No, it’s more likely a photo of Beulah Stratton, sister to John H. Stratton. 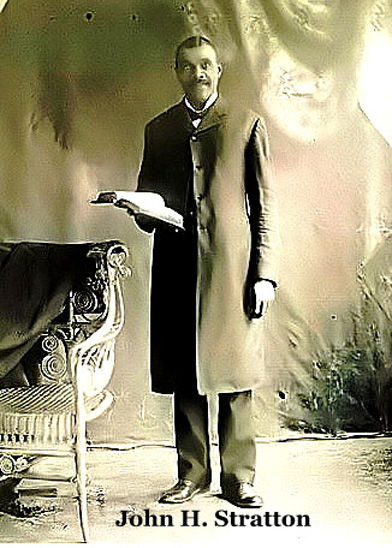 Was this Frankie Campbell? No, it’s more likely a photo of Beulah Stratton, sister to John H. Stratton.

For those of you who do not know me, I consider myself an avid investigator, and history is the perfect place for me to dig. When I tried to think of something local that very little is known about, I immediately thought of Frankie Campbell.

She is considered by almost all as the most important witness in the Wham robbery trial even though she was derided as somewhat “loony” at the time. She was the black female who was riding ahead of the wagons involved in the robbery.

According to the few accounts of her at the time, she was described as someone who was involved in gambling and money lending, who would accompany the payroll to be there when the men were paid so she could collect debts and win at cards.

On that day, she was riding a big bay horse that she had borrowed and was wearing a large floppy straw hat with a red paper rose and red velvet streamers, a bright yellow blouse fitted tight at the waist and a wine-colored skirt. This attire would have been considered very flamboyant in this area and at this time. This was the only description of her appearing in Larry Upton’s fine account of the robbery and in Larry Ball’s book, “Ambush At Bloody Run.”

Little more is learned about Frankie from her trial testimony. She was asked her name, and her reply was Frankie M. Campbell, but she said she sometimes went by Frankie Stratton. She was asked when she came to Arizona and answered Jan. 15, 1885. She was asked if she was married and replied “Oh, yes, to Robert Campbell of the 10th Regiment, J Company at Fort Grant, and he is a trumpeter and some of you probably know him.” Actually, Robert Campbell was in “the brig” at the time of the trial.

The attorney did not ask why she sometimes went by Stratton or recognized that there was never a J Company in the military. That was a longstanding and recognized rule in the military because J looked too much like I in writing. In Roman times the letters I and J were interchangeable, and the letter J was never used in the Civil War by either side. Robert Campbell was actually in G Company.

So we can ask how this testimony differed from the truth. It is unknown if Frankie had children but mentioned in her testimony that she wanted to get back to the children.

Only one newspaper article could be found — in the Arizona Weekly Citizen — detailing the story of why Robert Campbell was in jail. It was revealed that a murder took place Sept. 22, 1889, at Fort Grant, with the victim being James Cox, a trumpeter in troop E of the 10th Cavalry, by fellow trumpeter Robert Campbell of the same troop, which was said to be E in the article but is believed to have been G. It appears that Cox owed Campbell $5, and when Campbell demanded payment, Cox threatened to slap Campbell’s face; and Campbell replied that if he did, he would kill him. Cox did slap Campbell, and Campbell drew a pistol and shot Cox dead.

Campbell was turned over to the United States civil authorities and was taken to Tucson by Deputy Marshall H.D. Underwood, along with all the Indian prisoners held at San Carlos. In records, Cox was listed as a mulatto black, born 1859. Undoubtedly, Campbell was cleared with possible justifiable homicide or a deal to testify against fellow Buffalo soldiers who killed another soldier, William Fleming, at San Carlos in 1889 because fellow black soldiers found him too “uppity” and a possible informer on them.

Campbell was in Tucson on leave to testify in November 1889. It was very difficult to find Campbell in the military records because he could not read or write, and when asked his name, he replied “Cammel,” and that is how he was recorded as a soldier. He was listed as 27 years old when he enlisted in March 1886, making his birth year as 1859 in Tennessee.

He was in Fort Thomas on Nov. 4, 1887, and at Fort Grant in 1888. He re-enlisted in the 10th Cavalry, Company G, as a trumpeter in November 1889 and was discharged March 7, 1891, at Fort Thomas. No further record could be found of him and Frankie together, but Frankie was living in Nashville, Tenn., in 1900 as a boarder and listed herself as widowed. A possible death record for Frankie Mae Campbell was found in Jackson County, Fla., in 1949.

Frankie was born most probably in Mulberry, Lincoln County, Tenn., where she appeared in the 1870 census with her parents, James and Martha Robinson, as 5 years old and their only child. In the 1880 census of the same county, Frankie was the eldest of seven children, including Phronia, Catherine, Lula, James, Sam and a new, unnamed baby boy. The spelling of the name had changed to Robertson, again probably due to how they phonetically pronounced it to the census taker. She was born in 1865 at the end of the Civil War to newly freed slaves, and early life as sharecroppers must have fueled her desire for something more.

He was listed as divorced on his discharge papers. If John Stratton and Frankie were married, it was for a short duration, and she married Robert Campbell shortly after Stratton left Fort Grant.

Frankie was said to have owned multiple properties near Fort Thomas, but my search of property records reveal nothing in her name in county records. This should not be considered unusual because other incidents of person-to-person property sales without being recorded were known during this time.

She made her living as a gambler, a loan shark and collection agent for her husband, but she was well liked by the locals, including the Mormon population, where she was welcomed and fed along her route. She had escaped the poverty of her upbringing in Tennessee and made what she thought was a good life in rugged and dangerous Arizona.

I would have loved to hear her stories.