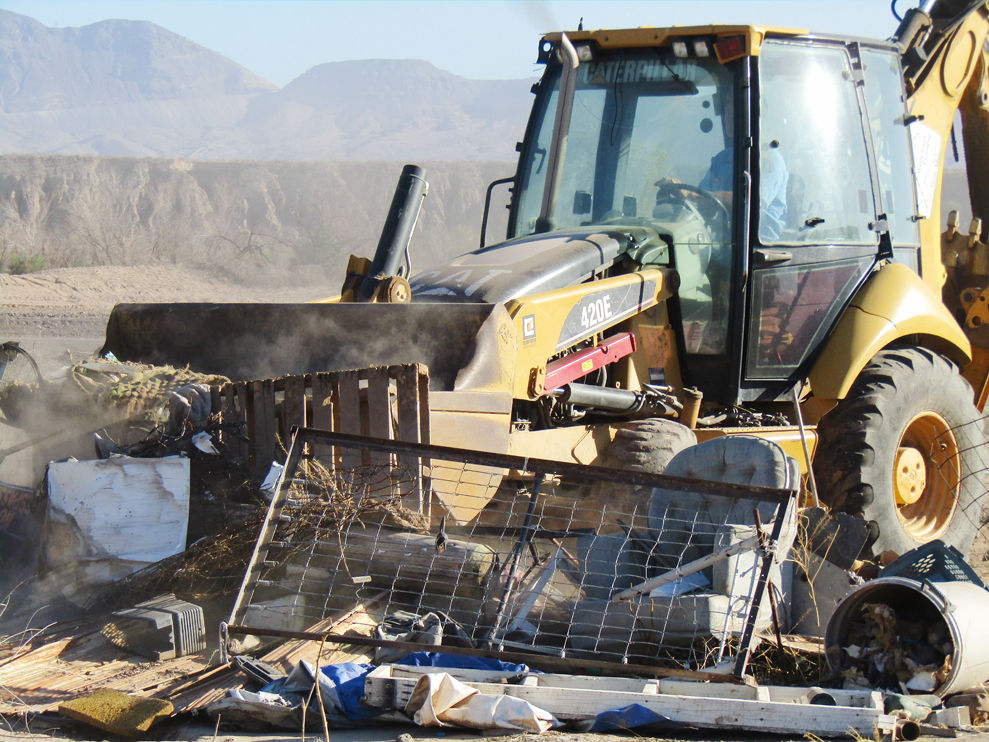 A front loader prepares to collect some of the waste. 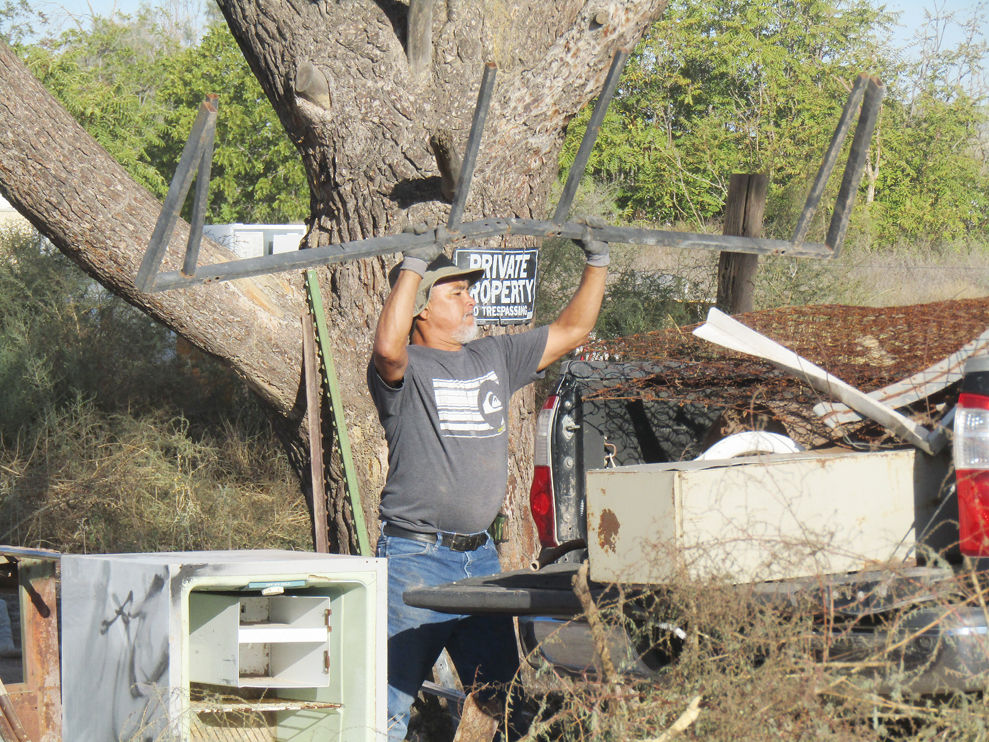 Little Hollywood resident Johnny Jurado loads some trash from his property into his pickup truck. 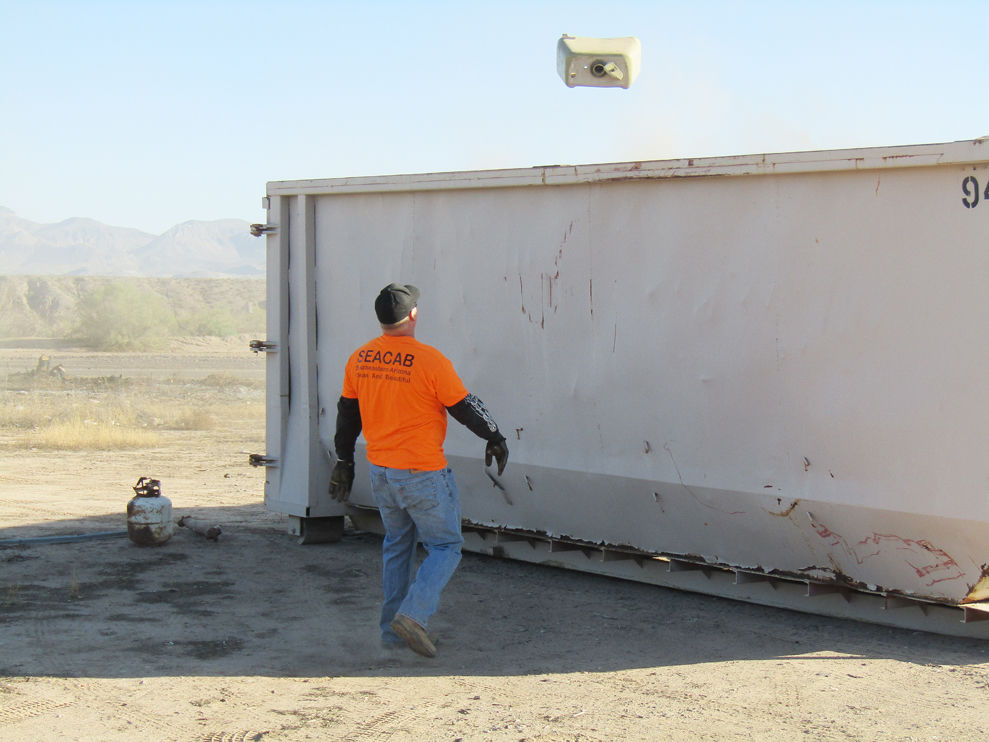 SEACAB’s Tim Linden adds an item to one of the roll-offs. 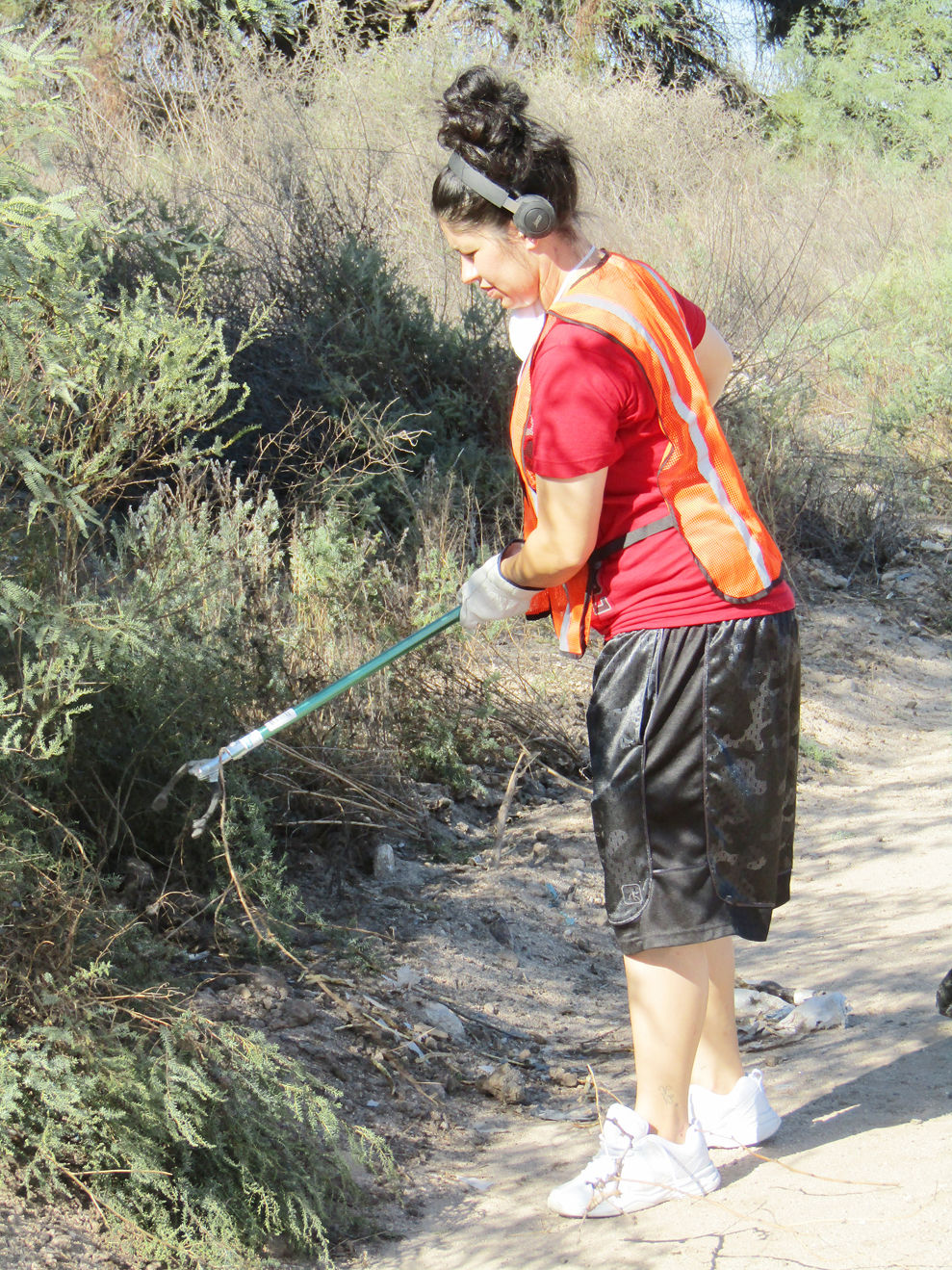 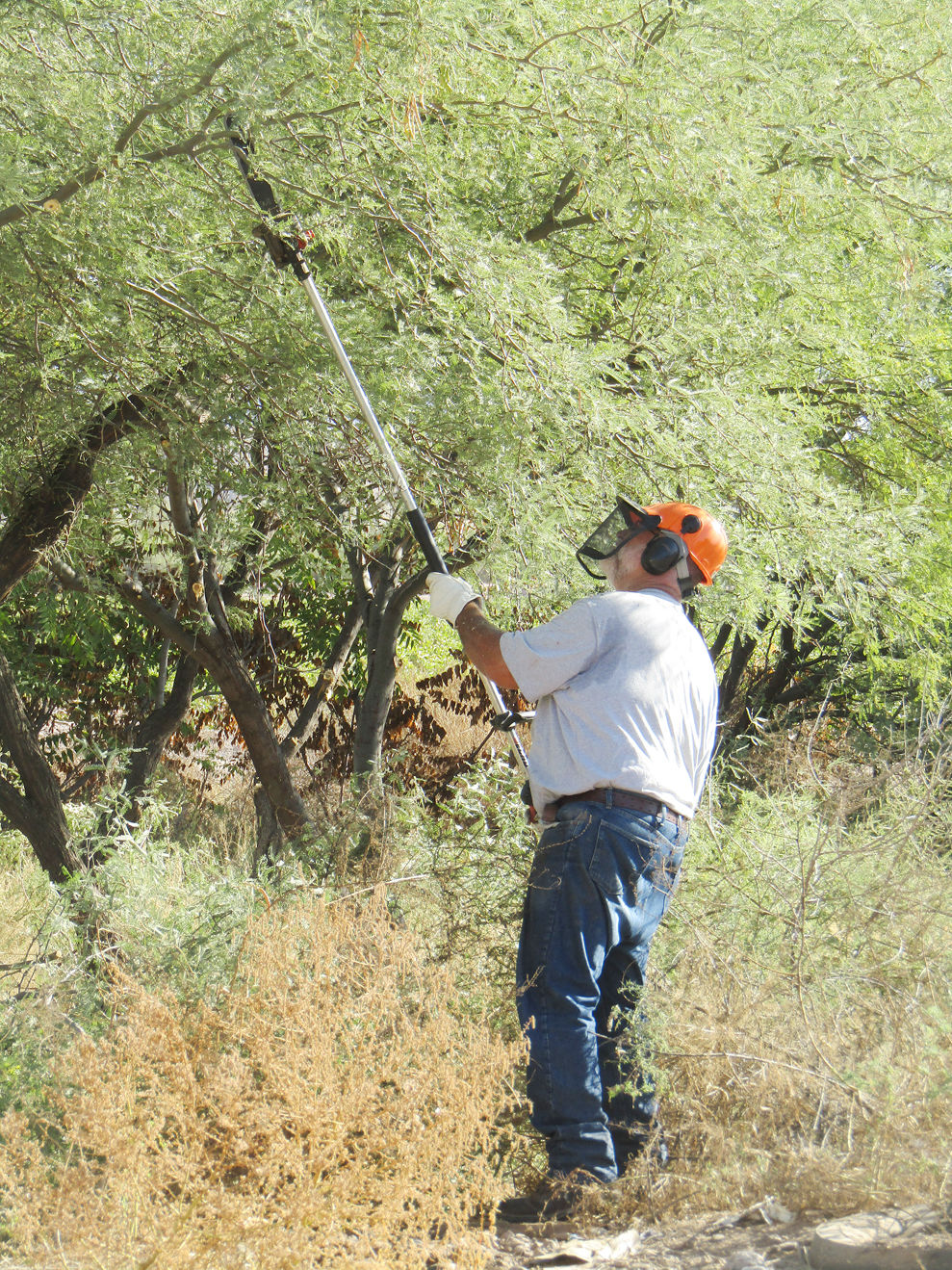 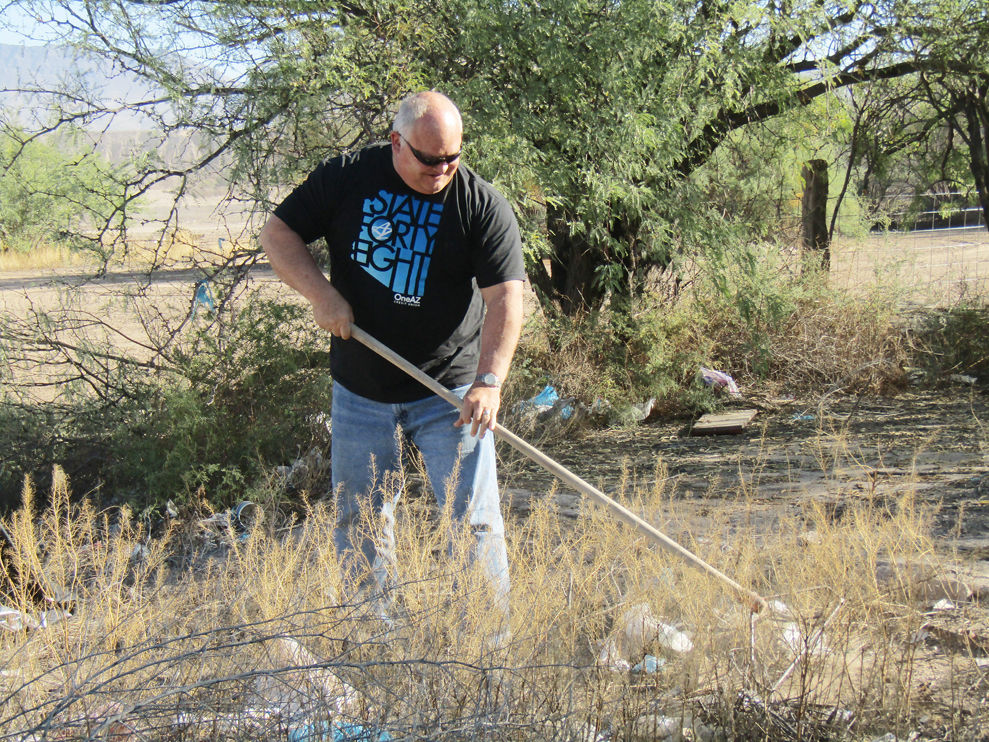 Graham County Supervisor Paul David rakes up some of the litter in Little Hollywood. 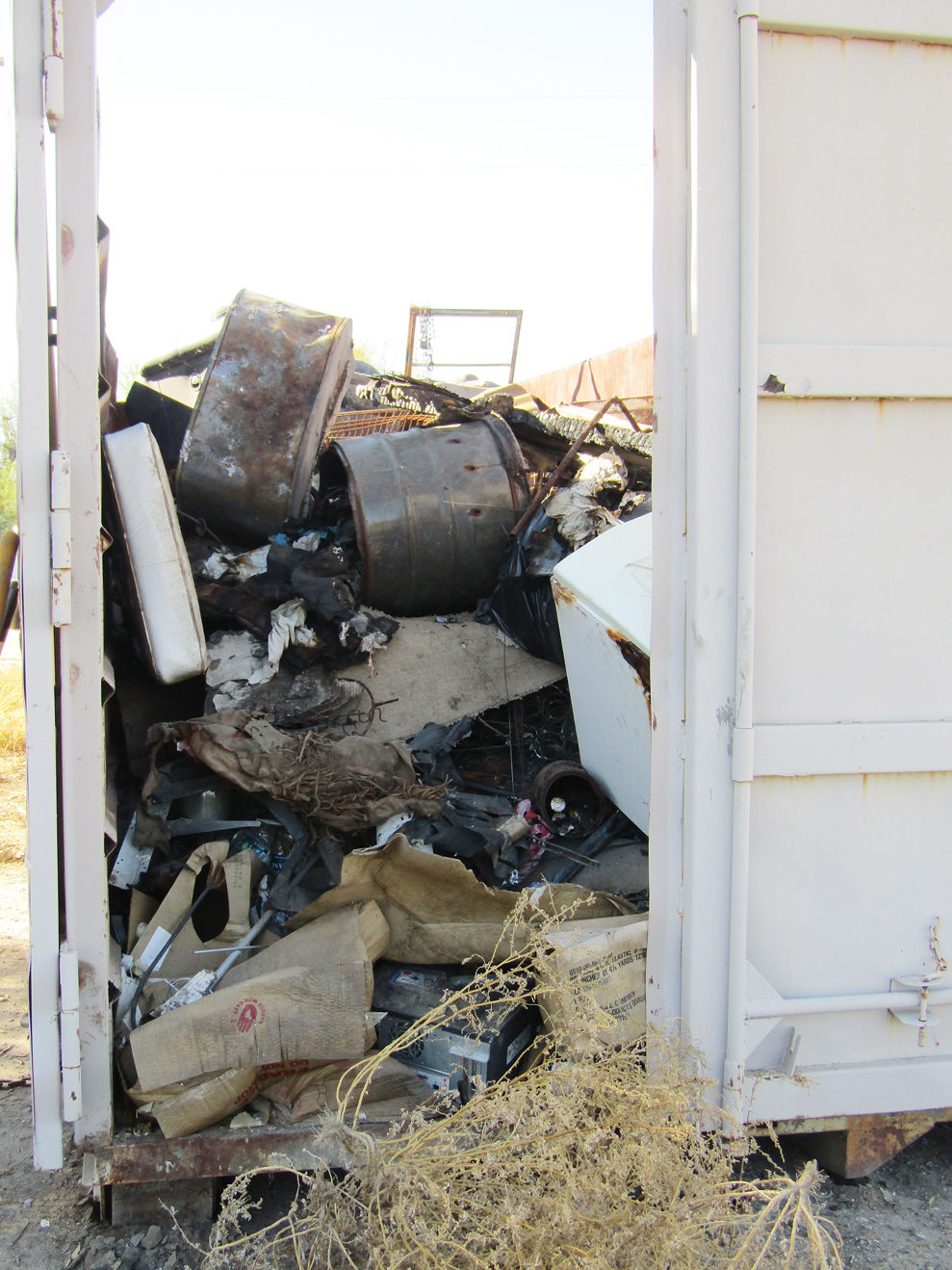 A roll-off begins to fill with collected trash. 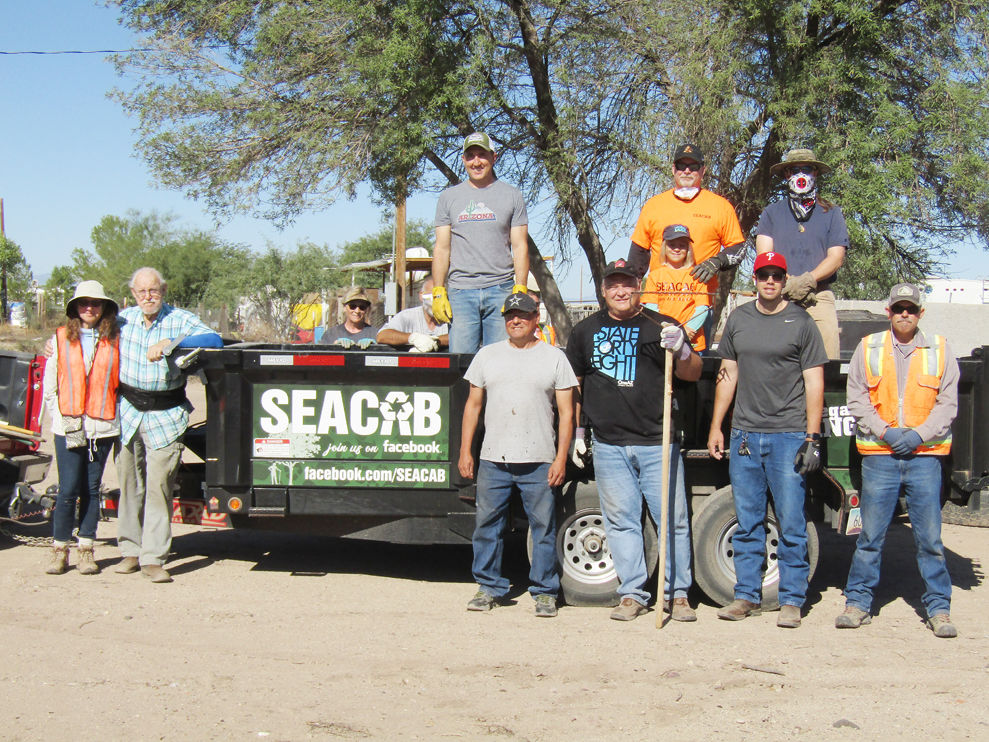 SEACAB members and other volunteers pose around the organization’s dump trailer during a short break.

A front loader prepares to collect some of the waste.

Little Hollywood resident Johnny Jurado loads some trash from his property into his pickup truck.

SEACAB’s Tim Linden adds an item to one of the roll-offs.

Graham County Supervisor Paul David rakes up some of the litter in Little Hollywood.

A roll-off begins to fill with collected trash.

SEACAB members and other volunteers pose around the organization’s dump trailer during a short break.

On a warm Saturday morning in Little Hollywood, Smith was helping pick up an assortment of litter in the grass. Other volunteers and community service workers were doing the same down along Vine Street, filling trash bags with debris from the roadside brush.

They were just part of last Saturday’s big cleanup in Little Hollywood, a neighborhood long plagued by illegal dumping, squatting and alleged drug activity. Smith said the cleanup was “a long time coming.” It was a team effort by Graham County, SEACAB, the City of Safford, community volunteers and neighborhood property owners.

“Our goal is to do four separate cleanups, and they’re each blocks. We’re starting on the easternmost block and working our way west. Our goal is just to make it a better place out here and clean this problem up once and for all,” said SEACAB chairman Tim Linden. “We’ve done cleanups out here before and it keeps coming back, but with the help of the county and enforcement, hopefully it’ll stay clean.”

The county provided four roll-offs, which were dropped off by Vista Recycling. Two front loaders, one provided by the City of Safford, soon filled them with debris of all kinds, including a great deal of discarded and worn furniture.

The city also provided a dump truck, which, along with SEACAB’s dump trailer, carried loads to the landfill. Elsewhere, abandoned vehicles were hauled away and trees were trimmed to increase visibility in the area. The Safford Fire Department also pitched in about a week before the cleanup, burning brush along Hollywood Road.

Saturday’s work focused mainly on state-owned land but also helped private landowners clean their property. “We had a lot of squatters come up in here, and we tried to help them out — and they brought in a bunch of trash,” said one landowner, Johnny Jurado. “Everybody thought they could just come in here and throw trash like it was a dump area. So now we’re trying to clean it up and make it nice for everybody.

“I’m very pleased that they came up in here and helped us out. I don’t think I would have been able to do it by myself, with so much trash around,” Jurado said. “We do appreciate the help.”

“There’s finally enough momentum and enough people that care to come together to clean it up,” Smith said. “We also have some tools that we didn’t used to have. About seven years ago, the state allowed us to have a hearing officer process, where there are some teeth in our code enforcement. We can send someone a letter to let them know what their violations are. They then have a court date if they don’t clean it up, and then there are fines and possibly jail time if they don’t. That’s entirely new.”

“Little Hollywood has had some challenges in its history, with the flooding that’s occurred here multiple times and displaced a lot of families,” Linden said. “There are private landowners here, but there are also properties that were taken over by the state, which have ended up being places for squatting, illegal dumping and questionable activities to occur.”

Those activities, according to Smith, include alleged drug activity. Smith said of one location, “It’s a busy place. Friday mornings, between 8 and 10, there’s a car there every three or four minutes. They get their drugs on Thursday night, and it runs that way until Sunday morning.”

“We as a community want to clean up the trash but also the problems, and that’s a problem,” Linden said. “It doesn’t help to look the other way. We would ask for law enforcement to help, to come out here and see if there’s truly that type of activity — and if so, that they address it. We’re not doing any favors to people here by letting that activity go on.”

SAFFORD — Changing the scene when it comes to illegal dumping, South Eastern Arizona Clean and Beautiful (SEACAB) is moving forward.