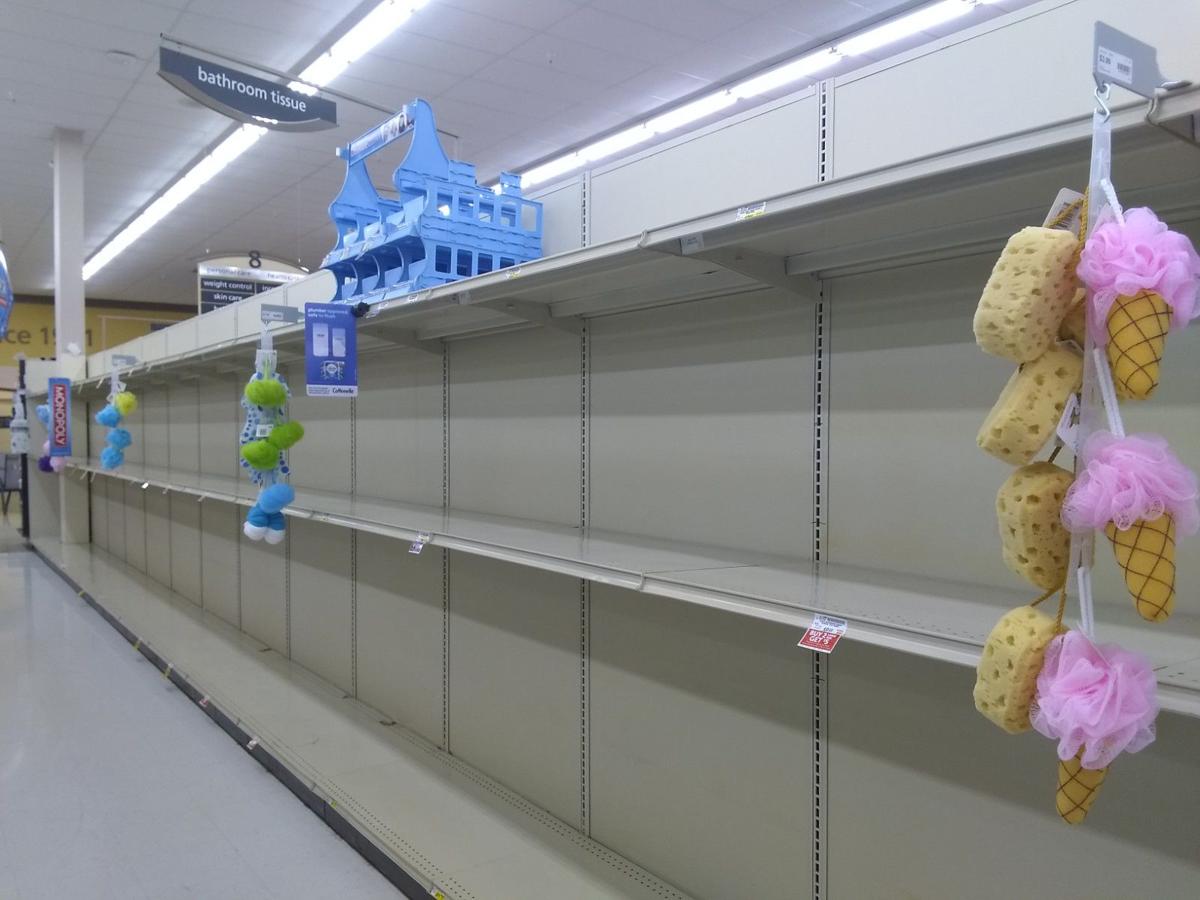 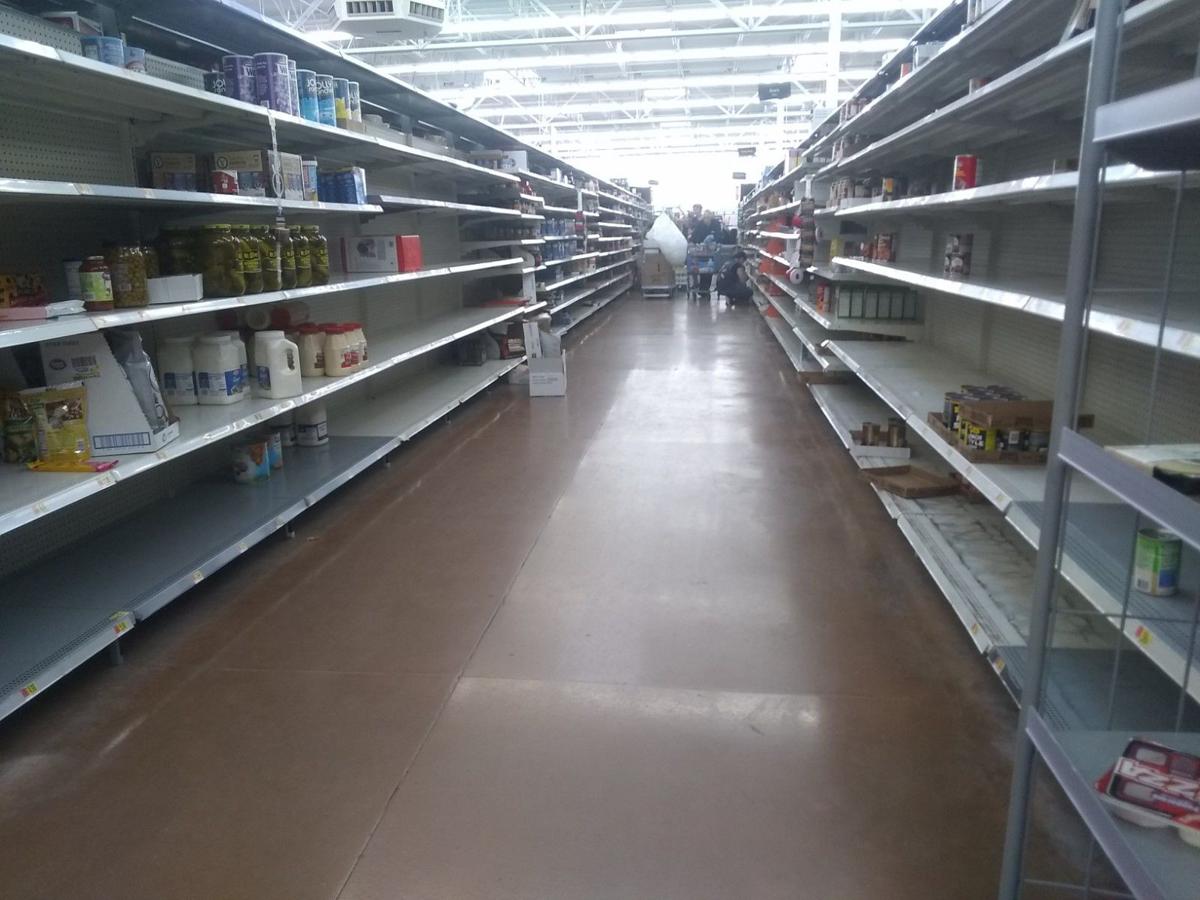 Canned goods and boxed meals were hard to find at Walmart Saturday night in the wake of COVID-19. 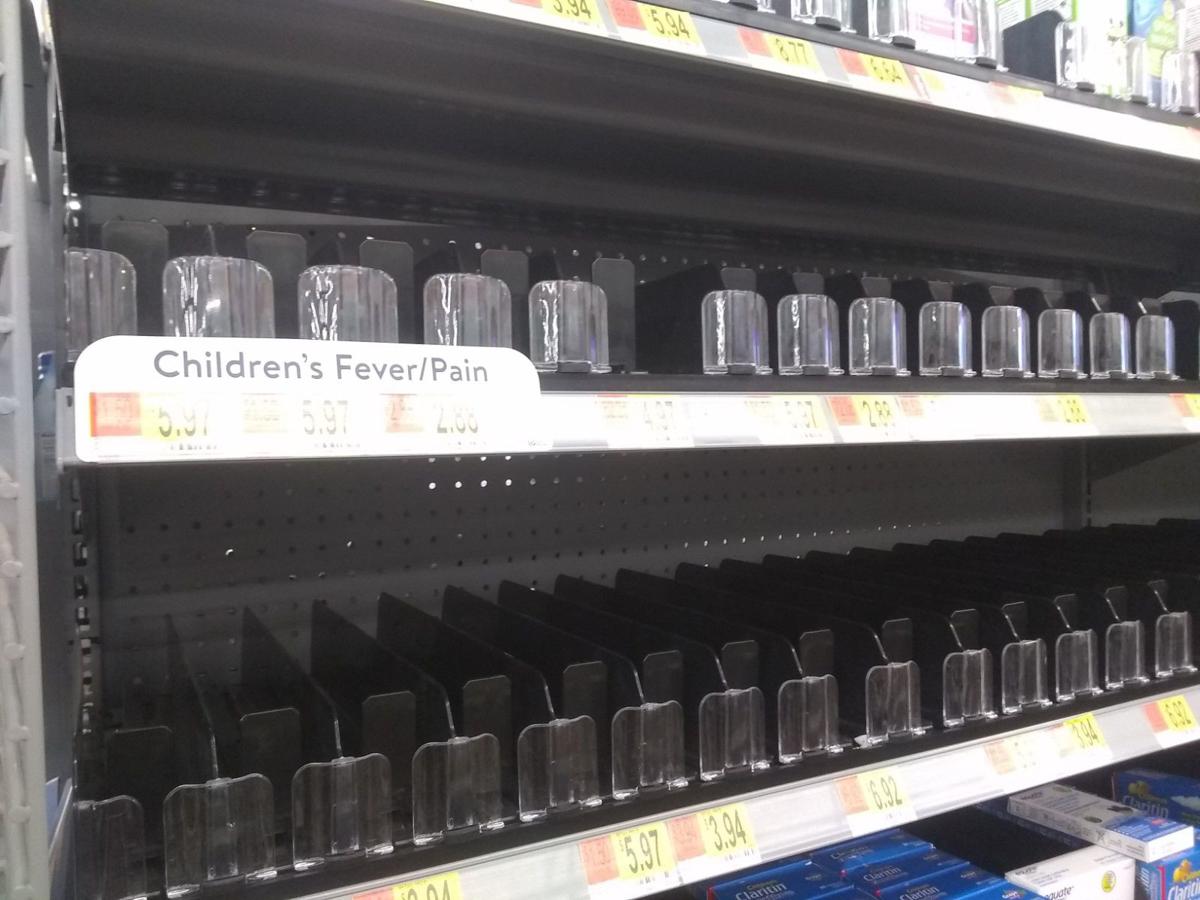 Walmart had been completely wiped out of pain relievers for children and adults Saturday night. 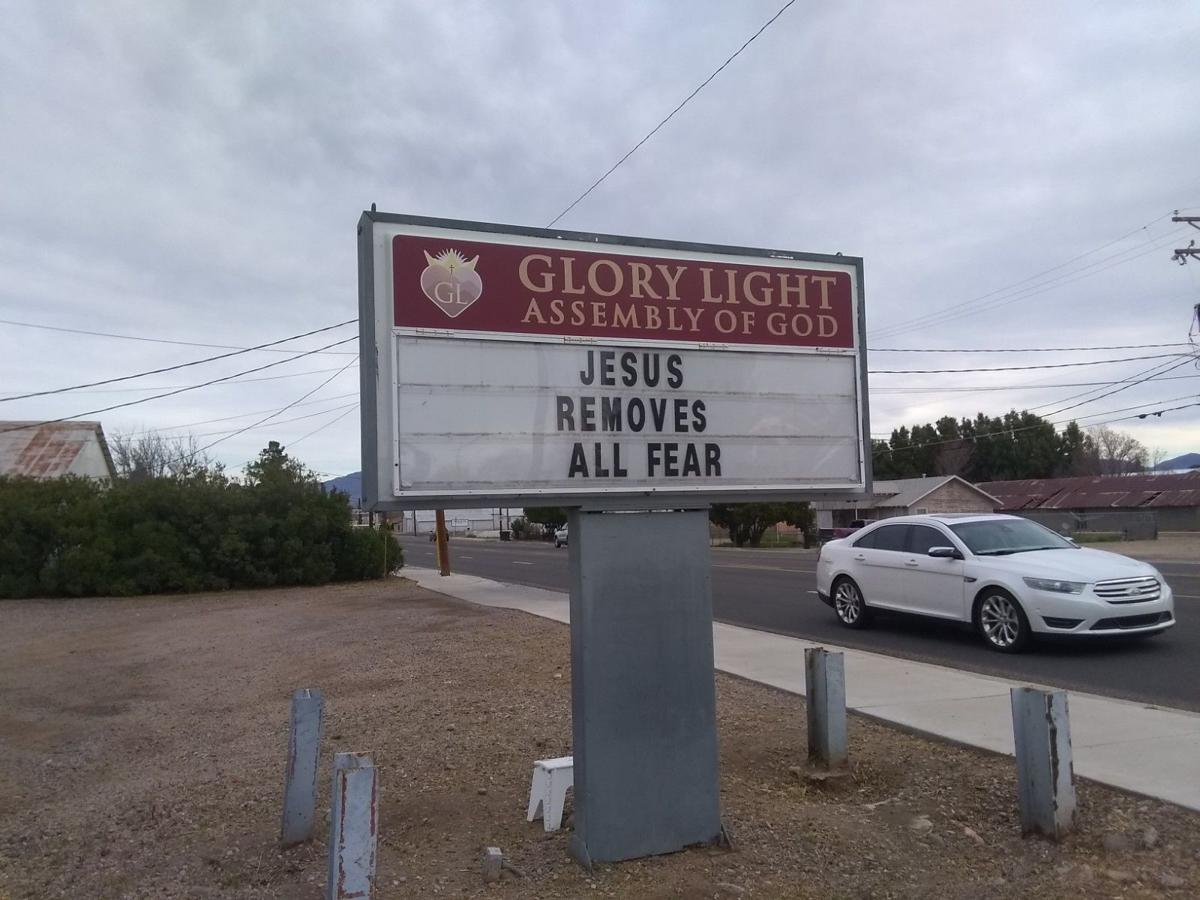 Many are placing their faith in God to get them through the pandemic.

We have lifted the paywall on this story. To support essential reporting, please consider becoming a subscriber.
1 of 4

Canned goods and boxed meals were hard to find at Walmart Saturday night in the wake of COVID-19.

Walmart had been completely wiped out of pain relievers for children and adults Saturday night.

Many are placing their faith in God to get them through the pandemic.

Surreal. Anyone walking through Safford’s Walmart and Safeway stores this weekend can attest. There were some aisles that felt as though they came straight out of a zombie apocalypse show or a dystopian movie.

Last week, it was just the cleaning and toilet paper aisles. Saturday night at Walmart, pain relievers, canned goods, deodorant, eggs and Top Ramen were missing along with the cleaning items and TP.

Safeway was even out of plastic grocery sacks. An employee said larger stores are replenished before smaller stores and they’d run out.

Sunday morning at Safeway, one of the employees said they had 20 packages of toilet paper left when they opened. They were gone within the first three minutes. People had been waiting at the door.

Both Safeway and Walmart, starting Sunday, have reduced their hours in Safford and elsewhere to allow their employees time to sanitize and restock. There is no shortage.

Safeway’s CEO posted a message to customers on the company’s website detailing their efforts to keep employees and customers safe from COVID-19. Walmart did the same.

However, many of the people in the stores over the weekend think their neighbors are being absurd.

Although the CDC has predicted that the virus – in a worst-case scenario – could cause 200,000 to 1.7 million deaths, no one seems to believe it. There have been no deaths so far in Arizona.

Nor are most of them altering their daily lives, although the CDC is calling for people to avoid mass gatherings and maintain a six-foot distance from each other.

Safford resident Anthony Richardson spent Saturday going store to store searching for bottled water for his dogs. There’s too much salt in tap water for them, he said.

Looking at the empty shelves, he said, “I think it’s ridiculous. The media and everything has made this a mad scramble. Everyone’s got to buy more than what they need because other people are buying and trying to prepare for something to me that is overblown and you can get over easy. I’m sure if I ended up with it I’d get over it.”

Experts agree. For most who get the virus, the symptoms will be mild and recovery relatively quick.

Eden resident Richard Brown has three children in Pima schools, which is where the first Graham County case of COVID-19 was discovered.

Brown blamed it all on the media, singling out CNN and FOX News.

“I’m not worried because it doesn’t kill you,” he said. “They’ve blown it out of proportion. You had a better chance of dying of the Spanish flu than the coronavirus.”

Terra Blair, a Thatcher resident who works as a personal shopper, was at Safeway Sunday morning looking for baby wipes for her 3-year-old son. She found a couple of packages.

“I think it’s insane. I think people have lost their minds. I work in retail and I came here because where I work is totally wiped out,” Blair said.

She thinks a lot of people are on edge, fearing travel restrictions. Others are unreasonably afraid of contracting the virus, she said.

“It’s only got a 2 percent death toll and aside from being highly contagious, most people recover when they’re at home,” Blair said. “People only get mild symptoms and I think people are overly concerned for something that’s not scary. We’re making it a lot scarier than it really is.”

Carmen Burnham Tellez, an 80-year-old Safford resident, was walking around Walmart Saturday with a sanitizing wipe in her hand. She always does that, though. Overall, she said she has mixed feelings.

In the end, it doesn’t matter, she said.

“We have to leave it in God’s hands and see where it’s going to end,” Burnham Tellez said. “I was in El Paso yesterday and it’s the same thing, everything is going, going, gone.”

The people in Willcox are suffering as well. Asked their opinions via Facebook, many chimed in with similar responses.

This from Belle Cowart:

“There is not a scrap of toilet paper, paper towels or disinfectant in our town as well as the surrounding towns. Cold medicine is flying off of the shelf. My friends and I are trying to get together and pool our resources to find enough to provide for some of the more at-risk people and children in our community because all of the able-bodied people are hoarding! It’s absolutely insane.”

Deanna Rivas had this to say: “My life hasn’t changed except for being annoyed at ignorant people hoarding necessities at the grocery store. Zero consideration for anyone else, especially those with infants and children. As far as I know bottled water or toilet paper isn’t a cure for any virus. Safeway and other stores need to put a limit on purchases.”

Amanda Perkins had a lot to say, too.

“I’m upset for the family of the special-needs boy at church this morning who was unable to change him properly when he soiled his diaper. They’ve been unable to find diapers or baby wipes anywhere. I’m upset for a family member who has bad allergies and really needs to mow their property but they can’t find the masks they use. I’m upset for my children’s great-grandfather who has been forced to cancel much-needed medical maintenance appointments because he is 83 and most at-risk. I’m upset for a friend who has waited and planned for months to spend his birthday with his little girl in Belgium but has now been forced to cancel all travel plans. I’m upset with my fellow man for being selfish and gluttonous when others are in need. And most of all I’m upset with the media for spreading fear and hyping it all up instead of sharing messages of hope. I’ve seen small slivers of hope when others have offered up something they have in order to help those in need, mostly here in my own small town. The entire situation has been eye-opening to say the least.”

And, VeroniKa BedFord: “Hasn’t really changed in a drastic way. We should be considerate of others and help those who really need it. Spread positivity and kindness.”

The coronavirus is also having an impact on other aspects of daily life.

At St. Rose of Lima Catholic Church, a notice from Bishop Edward J. Weisenburger asks people who are sick to “stay home from Mass as an act of charity.”

Pastors have been asked not to use the chalice during Holy Communion and to distribute the Holy Communion by hand. Parishioners also should refrain from using the Holy Water fonts and from holding hands during the Our Father Prayer. When expressing the “Sign of Peace” parishioners shouldn’t touch any longer.

Safford resident Pauline Stidum typically goes to 7 a.m. Mass on Sundays. She hasn’t seen a decline in attendance yet.

“I’m not allowing it to affect me, I’m just taking the precautions that they tell us to do and not panicking because you know what? God’s going to take care of everything for us,” she said. “We just have to learn from this and have faith that He will take care of us.”

She hopes the pandemic instills some lessons.

“There wasn’t as many people as usual. We have somewhat older people in the congregation and with immune systems and that kind of thing,” Knight said. “We’re all just trying not to be too scared and trust in everything we trust in.”

Like St. Rose, the church and its members are making an extra effort to keep everything sanitized.

“We’re doing elbow bumps instead of hugging and shaking hands and just trying to not let too much panic and fear hit,” Knight said. “You have to be cautious and we realize if you gather in service there’s a little bit more of a chance, but you’ve got to trust in the Lord, too, though.”

As far as the grocery store, Knight said he only stocked up on cereal because it was spring break for the kids.