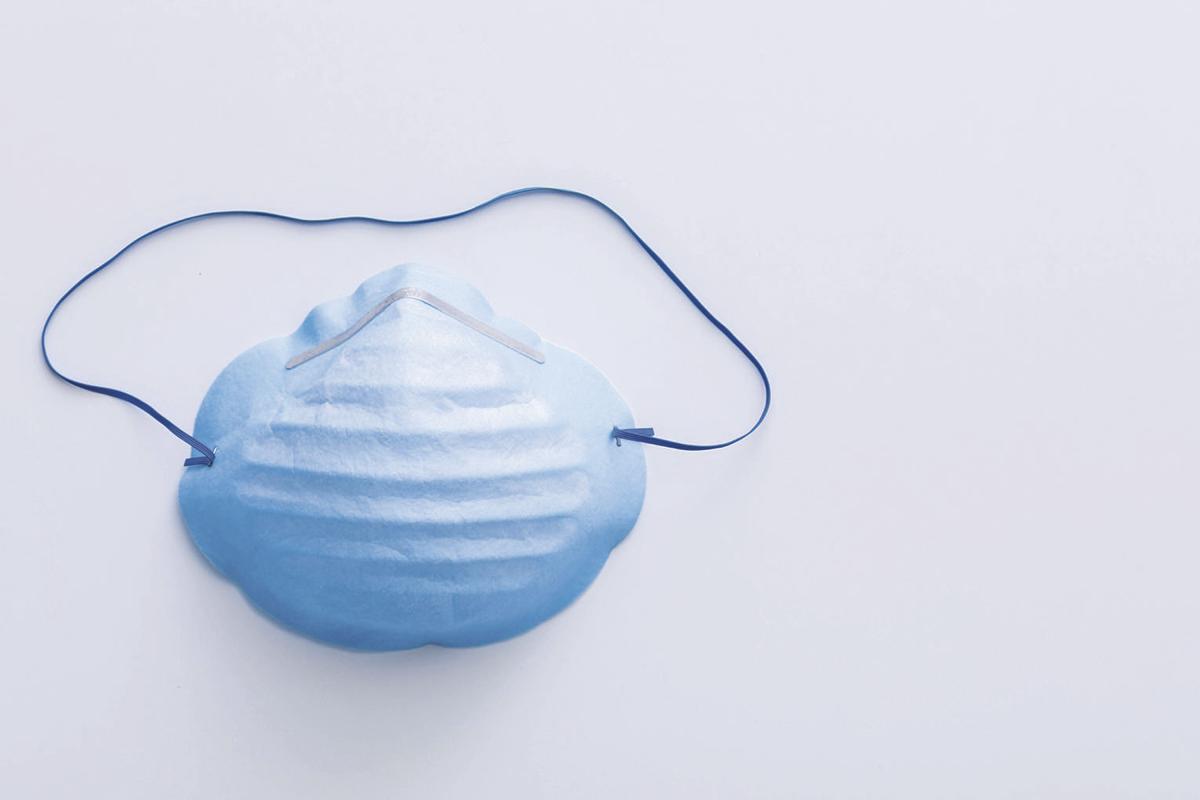 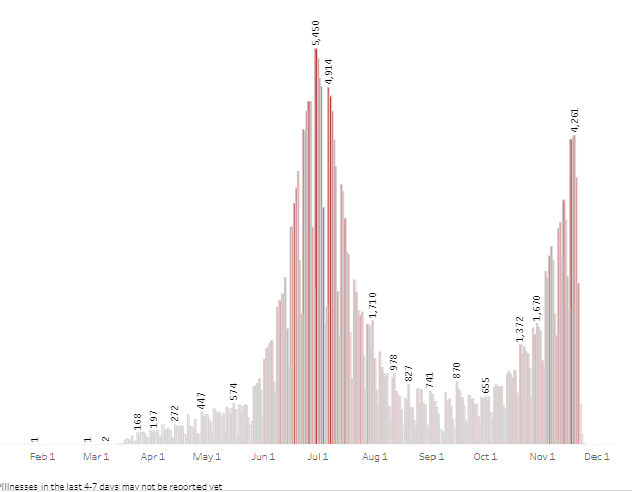 COVID-19 cases in Arizona by day. Illnesses in the last four to seven days may not yet be reported.

The Graham County Board of Supervisors voted unanimously Wednesday morning to pass a six-week mask mandate; two of the board members said they never thought they’d be doing so.

No one is in favor of infringing upon people’s personal liberties, but it’s for a short duration and it’s needed, said District 3 Supervisor Danny Smith.

“It’s not something I thought I’d be doing a couple of weeks ago,” Smith said. “It’s six weeks. We need help limiting the number of people walking in the doors of the hospital.”

District 2 Supervisor Jim Palmer said he’s been resisting a mandate for months, but it’s the right thing to do now.

“I hate this worse than anything else, but we have to look at the consequences,” Palmer said.

Graham County businesses “simply can’t afford” to be shutdown again and if nothing is done Gov. Doug Ducey may have no choice but to take that action again, Palmer said.

Supervisor Paul David and his colleagues said that health officials’ warnings, residents’ phone calls and recent actions by the Graham County Chamber of Commerce board and local municipalities helped them make their decision.

Thatcher’s town council passed a resolution Tuesday night to ask the board to pass the mandate. The Graham County Chamber of Commerce board did so Saturday and Pima’s Town Council did Monday night. Safford’s city council has scheduled a special meeting for Nov. 30 to take up the matter.

The predominant fear is Arizona’s health care system could be overwhelmed with COVID-19 patients.

According to statistics released Wednesday, only 10 percent of the state’s ICU beds are currently available and only 12 percent of hospital beds in general are unoccupied.

According to the Arizona Department of Health Services, there have been only 79 lab-confirmed flu cases since the season began Sept. 27. Normally there are about 390 by this point in the season.

Fourteen acutely ill COVID-19 patients have been transferred to other hospitals within the last month, according to the Graham County Health Department.

During a meeting in Safford Monday night, Dr. Susan Jones, who works at the Gila Valley Health Clinic and Mt. Graham Regional Medical Center said if the COVID-19 numbers aren’t brought under control, the clinic and hospital will lose the ability to care not only for COVID-19 patients, but regular patients as well.

To make matters worse, chances are good that Tucson’s hospitals soon won’t even be able to take Graham County patients either because of the surge of cases there, Jones said.

On a normal day, 17 patients normally fill the beds at Mt. Graham, Jones said. On Friday, the 49-bed hospital had 17 COVID-19 patients alone.

Lately, the clinic has been testing 29-32 patients a day for the virus and 20 percent of them have it, Jones said.

Melissa Lunt, a registered nurse with the Graham County Health Department, said Graham County’s positivity rate and case rate per capita are the highest in the state. On Tuesday, the health department announced a one-day total of 75 new covid-19 patients, a record, she said.

Lunt too mentioned the 17 hospitalized COVID-19 patients. She pointed out that in August, during the highest spike in cases, only seven patients were hospitalized.

Earlier this week Mt. Graham Regional Medical Center CEO Roland Knox said he has 21 staff members out due to COVID-19. Nurses are working extra shifts and the hospital is bringing in staff who are paid by the day.

“We have space to increase our number of beds, but are limited by the number of staff members we have,” Knox said.

Following Tuesday night’s meeting, Thatcher Mayor Bob Rivera said that if the board passes a mandate individual business owners will no longer have to worry about losing customers to other businesses because they’ll all be subject to the mandate.

“It will level the playing field,” Rivera said, adding the sheriff’s department and local law enforcement agencies would equally be responsible for enforcing the mandate.

He also pointed out a mass marketing campaign for masks has been launched and should help empower businesses, too, as the same posters will be available for all businesses.

According to the U.S. Centers for Disease Control, the coronavirus that causes COVID-19 is transmitted predominantly by respiratory droplets generated when people cough, sneeze, sing, talk or breathe. The CDC recommends community use of masks to prevent the transmission of the virus especially since more than 50 percent of people who transmit the virus are asymptomatic or presymptomatic.

The CDC has reported that upwards of 80% blockage has been achieved in human experiments that have measured blocking of all respiratory droplets, with cloth masks in some studies performing on par with surgical masks as barriers for source control.

For more information on the benefits of masks, visit the CDC’s website.

Health officials in Graham County were asked to provide links to scientific studies indicating masks help slow the spread of COVID-19. Here are they are: