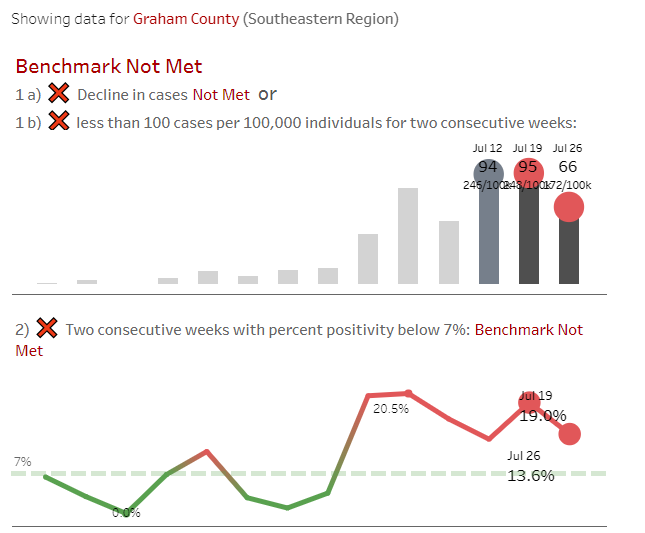 The school boards in Pima and Thatcher voted Thursday night to open their doors for traditional learning on Monday, but the Safford board voted 4-1 to wait until state-recommended benchmarks are met.

Although schools in Fort Thomas will be opening its doors on Monday, it will only be to those students who want to use the district's internet for distance learning. They'll be provided supervision, breakfast and lunch, but no transportation or teaching.

"We're hoping for the day everyone can return in a safe manner," Hawkins said.

Last week, the Arizona State Health Department said they would like to see certain benchmarks met before schools open for in-person instruction. They are:

•The number of people showing up at local hospitals with COVID-like symptoms is less than 10 percent of all visits;

•A rate of infection drops below 100 cases for every 100,000 residents OR a decline in the weekly average in the number of cases for two consecutive weeks, even if the infection rate tops 100 per 100,000.

•Fewer than 7 percent of area residents tested for COVID-19 test positive for the virus;

Graham County Health Department Director Brian Douglas met with all of the superintendents on Monday to share where Graham County stood on the benchmarks. Although he noted the county had only met the benchmark about hospitals, he said the data is moving in the right direction in the other two areas.

During a two-hour meeting, Safford Unified School District Superintendent A.J. Taylor read several letters from parents before the board voted. Most spoke overwhelmingly in favor of opening the schools, expressing faith in the district's ability to keep their students safe. Many expressed fears about the physical and mental well-being of students kept at home and the difficulties of distance learning.

The handful who wrote against the re-opening expressed fear about the spread of the virus. One letter writer, Dr. Catherine H. Romero, a family medicine specialist, said closing down schools is only a temporary measure. Losing teachers, parents or children to COVID-19 would be permanent, she said.

SUSD Board member Julie Cluff said this is the hardest situation she's had to deal with in her time on the board, noting the board members are "damned if they do and damned if they don't." She recommended following the advice of medical experts and waiting another week to check  on the numbers.

Fellow board member, Craig Hackett agreed the board needs to wait before opening the schools. He said that while he isn't a medical expert, he understands what it takes to become an expert and it's not reading social media posts and blogs or listening to friends who have read articles on the internet.

Following your emotions can get people into trouble, he said.

Hackett also expressed his belief that if everyone would just start wearing masks, which are scientifically proven to slow the spread of the virus, students would be back in school soon.

Board president Mike DeLaO said he and many others he's spoken with are just scared. He ran into a teacher who has worked for the district more than 30 years who told him he's scared to set foot in the building.

Matt Herrington said he wanted to open the schools immediately. He told his fellow board members he believes it comes down to choice and if parents want to send their children to school, they should be allowed to do so.

Before recommending they keep the schools closed and stick with distance learning for now, Taylor shared several statistics with the board.

While everyone agrees the children will fare better in school, 75 percent of the district's teachers have concerns about returning to school right now.

He also pointed out that the Arizona Department of Education says that if just two unrelated COVID-19 cases crop up, it's enough to shut an entire school site down.

He truly thought back in July, it would be safe to return to school now and it's just not, Taylor said. It is better to wait until all of the benchmarks are met, he said.

"I just don't feel good going outside of what the medical experts say," he said.

Taylor said 235 students have signed up for the Henry Dunkerson Pathways Academy, the district's online school. They had expected roughly 350 students to sign up, he said.

The academy was originally a 7-12 school, but the state recently gave the district permission to expand it to a K-12 school.

Those students in Pima and Thatcher who are more comfortable learning from home can continue to do so.

Pima Unified School Superintendent Sean Rickert said Friday morning that fewer than 100 of the district's 1,000 students have signed up for distance learning so far.

The district has as many safety measures put into place as they can, he said.