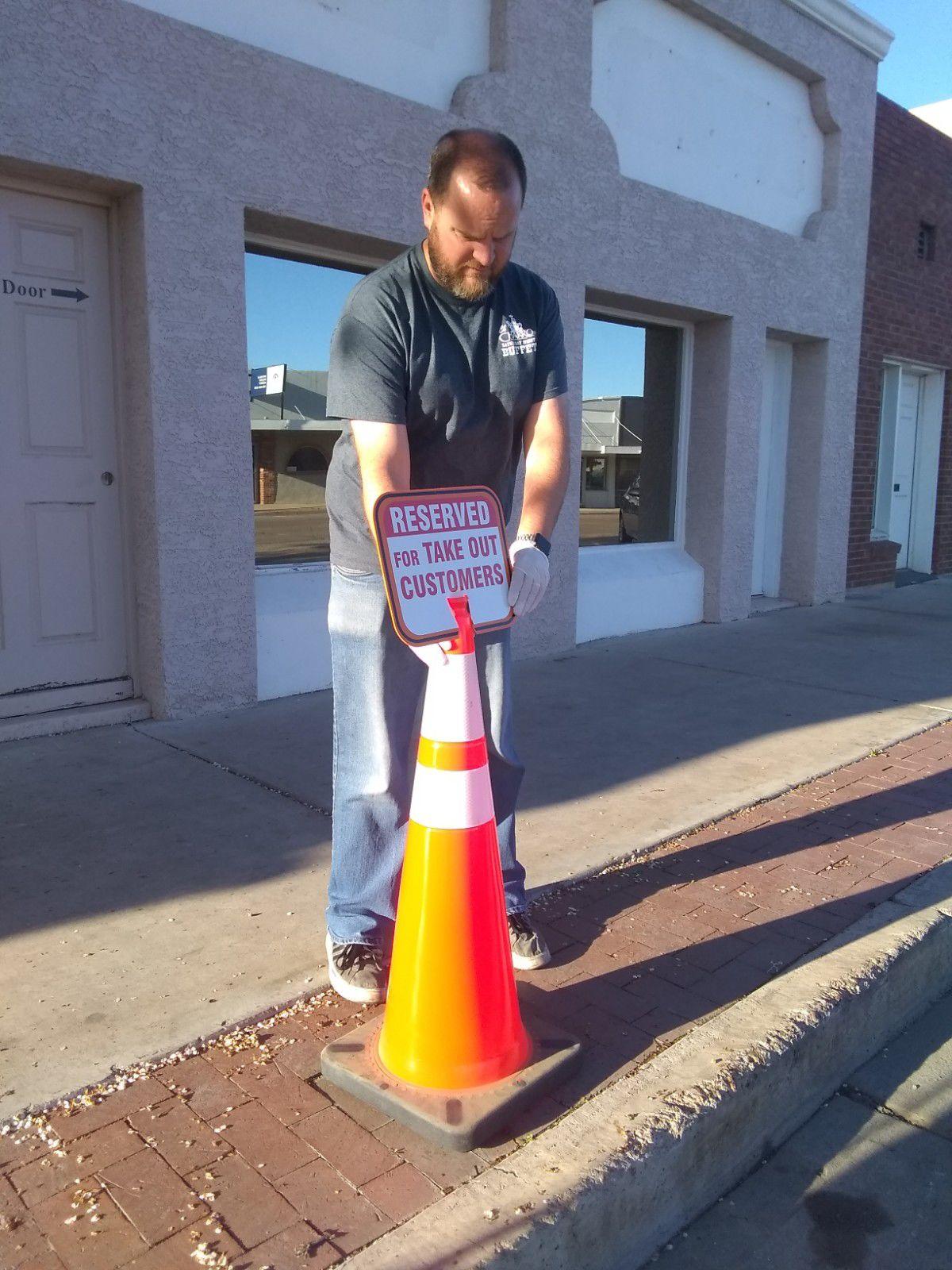 Restaurants all around Graham County are switching to curbside service or takeout as they look to weather the storm of coronavirus-related restrictions.

On Thursday, Gov. Doug Ducey shut down bars in counties with COVID-19 cases and said restaurants in those counties can no longer offer dine-in services.

In Thatcher, Toni’s Kitchen Pizzarama has gone to strictly takeout orders in the past week. Owner Letty Garcia said customers have responded well to the change.

Toni’s Kitchen customer Gloria Boswell placed a lunch order Friday to show her support for the business. “I have food at home, but I chose to get lunch here because they’re suffering,” she said.

“I think restaurants across the board should do this,” Boswell said of takeout and curbside pickup. “We need to tamp down this virus.”

Garcia said she had not let any employees go, but was trying to give more hours to older workers with bills and families.

“Right now, we’re just trying to hang on,” she said. “It’s awful. but we all have to help out and make sure everybody’s safe. We just have to ride this out.”

Danielle Ingram, manager of La Paloma Restaurant in Solomon, said they’ve had to lay off half of their staff and slash their business hours. They’re offering curbside service and take-out. They’ll also deliver orders of $50 or more.

“We still have a lot of people who want to come in and dine and we have to explain to them they can’t,” Ingram said. “A lot of them just leave. I’m hoping it will pick up, but a lot of people just don’t want to go out. They want to isolate themselves.”

Over in Clifton, Jackie Norton, owner of PJ’s restaurant, is crossing her fingers that no one contracts COVID-19 in Greenlee County anytime soon. Fourteen employees staff the 40-year-old eatery.

Although she’s closed down some of her tables and moved the rest six feet away from each other, business is already down, Norton said.

“I’m going to do my best to keep my staff on and take care of them, but all of this, from day-to-day can change,” she said.

Fast-food restaurants’ drive-thrus remain open, but how they are handling the crisis differs. An employee working at the Burger King in Thatcher on Friday was wearing gloves and using a plastic bin to collect and return items. However, an employee at Arby’s on Sunday was taking no precautionary actions.

Just hours after Ducey directed all bars and restaurants in counties with COVID-19 patients to halt dine-in services, City of Safford staff members were following up on their promise to help restaurants survive the pandemic.

“I appreciate it very much. They’ve been active and accommodating,” Howard said of the city.

Howard said she feels lucky in that she already has an app so people can order food and coffee; many other business owners do not. Nor do they have a website like she does.

“I’m really glad I did it because it’s helped us out a lot,” Howard said.

She also noted her customers are welcome to call to place orders for food and everything else she has in her store.

She is determined to remain open as long as her employees want to continue to work and her customers feel comfortable coming, she said.

“They’re the reason I’m open, so they can keep making payments and taking care of themselves,” Howard said of her employees.

“I sent them all a text last night and I told them they don’t have to work if they’re uncomfortable...their jobs will be waiting when this is all over,” Howard said.

All of them have expressed a desire to keep working.

“I’ve been blessed with upbeat, positive girls,” she said.

“I have 50 employees and most of them would be out of a job right now, but they volunteered to offer free local deliveries,” Biggs said.

As for the general mood, Biggs said, “Everybody seems to be frustrated, but they’re willing to roll with the changes for the safety of the public’s health.”

He has 19 employees he hopes he will be able to keep on payroll.

Reactions to the ongoing crisis are relatively consistent, he said. People are frustrated, but understand the need to socially distance themselves.

“My staff is a little discouraged and my clientele want to sit and dine, but they know we can’t risk it,” Coronado said. “If you look at the news in Europe and look at the death toll, it’s a real issue. Plus, look at history with the Black Plague and the Spanish Flu.”

Other local gathering places, such as gyms and theaters, closed their doors starting Friday. They, too, were included in the governor’s order.

Victory Fellowship Theater was one of those places.

“Today’s our last day, until they give us the go-ahead to start back up,” said Pastor John Neal of Victory Fellowship Church, which runs the theater. “We were doing all we could to stay open, cleaning everything with bleach, but we’re shutting down.

“It’ll definitely hurt our employees,” said Neal. “It’ll hurt them; it’ll hurt us. Even if nobody comes, the bills don’t go away.”

However, Neal understood the reasons for the order.

“We want to see the virus go away too, so if that’s what it takes let’s do it. I don’t want to see people get sick. We want to enjoy life.”

In local hotels, social distancing and extra cleaning measures are part of the new routine.

Best Western Plus General Manager Martin Valdez said his focus was on keeping high-contact areas clean. Public areas of the hotel are disinfected throughout the day, room keys are being sanitized and the front desk has hand sanitizer bottles for staff and guests.

The hotel has also shut down its breakfast buffet and no longer serves cookies in the dining area; however, breakfast remains available in “grab and go” bags. Coffee is still served, but guests are asked to put a napkin around coffee pot handles when pouring. Valdez said coffee pot handles are being sanitized frequently.

Valdez said occupancy was probably down 5 to 10 percent.

“We have had some cancellations, but we’re not really seeing any kind of panic from the guests,” he added. Best Western Plus has waived its room cancellation policy for now.

Valdez said social distancing was in place and employees were being asked to stay home if they were ill, but there had been no health issues among staff so far. Valdez said he did not foresee any staff reductions.

In Clifton, Hotel Reardon co-owner Tom Shalkowitz said his maids are working extra hours to keep make sure their rooms remain safe for visitors, but he has seen a drop in customers.

“Due to the coronavirus things have been pretty slow, a lot of the sub-contractors haven’t been coming in; it’s mostly just the Freeport employees that are here,” Shalkowitz said. He added that he believes it’s corporate hotels that will be hit harder economically speaking.

“Our company’s focus continues to be protecting our workforce and assisting communities where we operate by supporting precautionary actions and public health responses. We have implemented a work-from-home program for those employees who can and are taking multiple actions to protect those employees who must physically be at work. These include allowing only business critical visitors at sites, conducting health checks on those visitors, and providing signage and regular reminders and information to employees about how to stop the spread of coronavirus.”