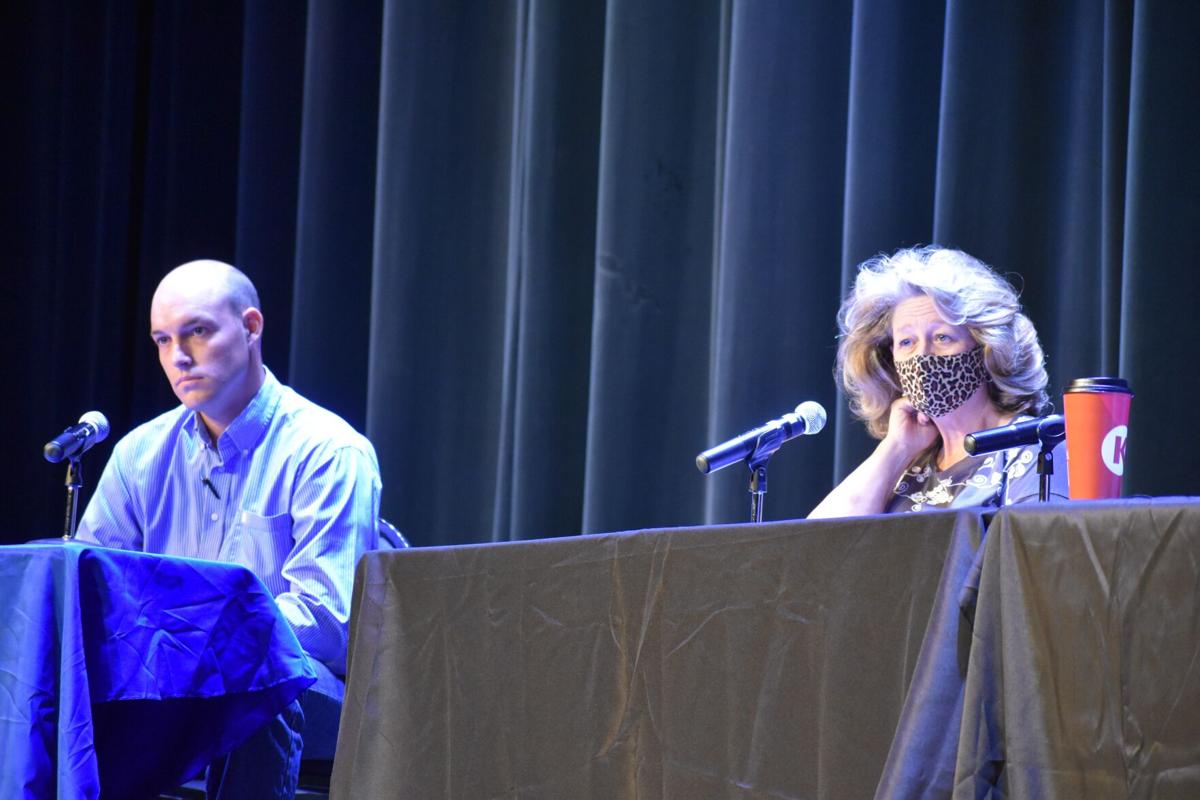 Safford Unified School District board members Matt Herrington and Julie Cluff listen to parents speak out against a return to remote learning. 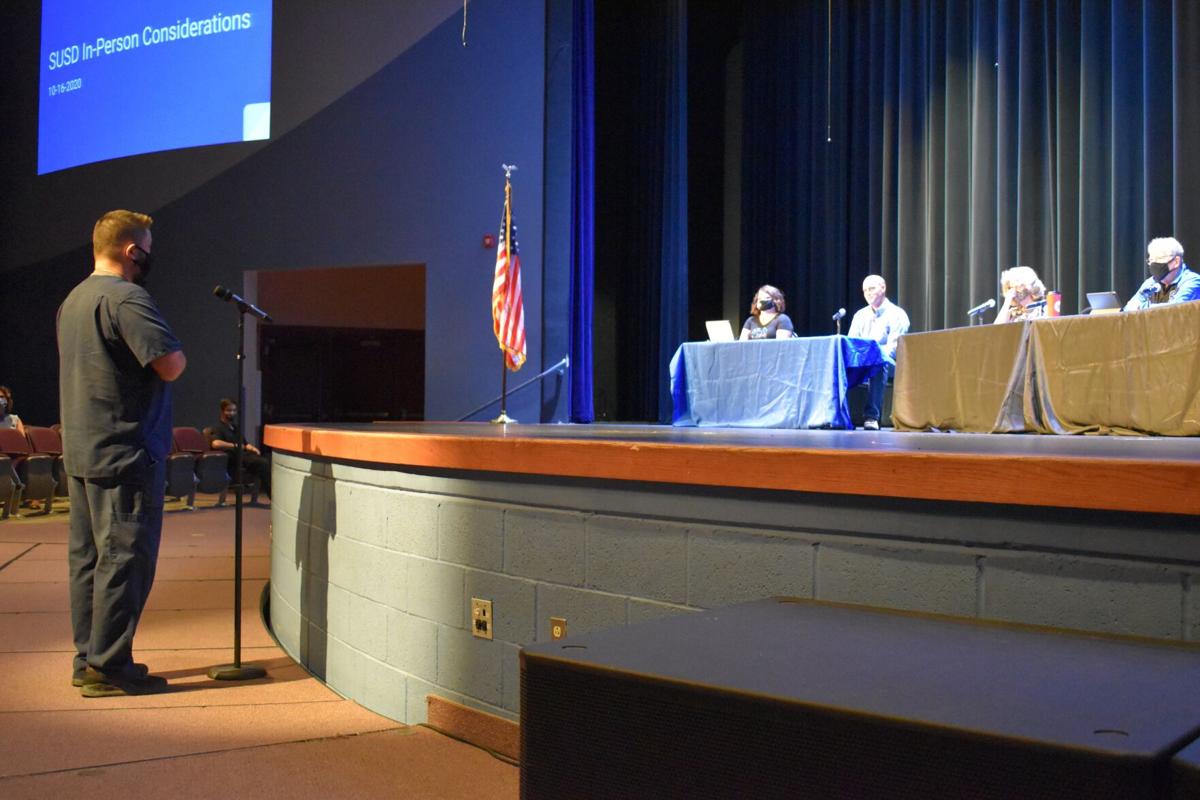 George Jacobson tells SUSD board members he learned the hard way that the "kitchen table is not an atmosphere for learning." 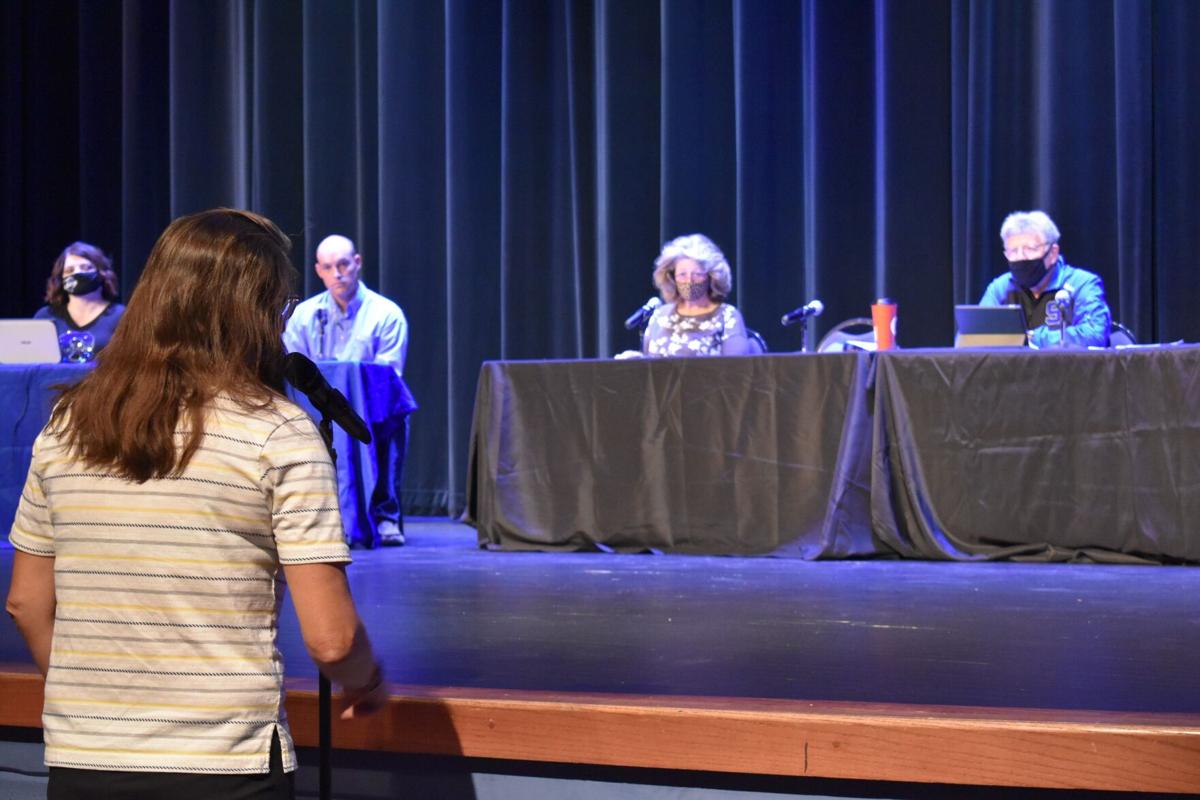 Safford Unified School District board members Matt Herrington and Julie Cluff listen to parents speak out against a return to remote learning.

George Jacobson tells SUSD board members he learned the hard way that the "kitchen table is not an atmosphere for learning."

The Safford Unified School District governing board voted 4-1 Friday morning to keep students and teachers in the classroom after an hour-long meeting in which parents overwhelmingly spoke out against returning to distance learning.

The board took up the matter after Graham County Health Department Director Brian Douglas announced the county no longer meets two of the three COVID-19 benchmarks recommended by the Arizona Department of Health Services for in-person learning.

Twenty-six of the 67 patients live in Safford and 24 are San Carlos Apache tribal members. The rest of the patients are split between Pima, Fort Thomas and Thatcher.

Douglas said that based on the latest numbers, the state is recommending a hybrid learning model for 14 of the state's 15 counties. Greenlee County is the only county where in-person learning is recommended.

The health director said there are a number of issues contributing to the rising number of COVID-19 cases, including the return to in-school learning.

"When people congregate, it spreads. that's just what it does," Douglas said.

The number of students getting COVID-19 in the classroom is minimal, however "a good portion" of those who are getting ill are athletes who are engaged in close contact sports and spend hours on school buses getting to and from games, Douglas said.

SUSD Superintendent A.J. Taylor told the board he is in favor of returning to the hybrid model that was in place at the beginning of the school year.

He said he realizes everyone is frustrated and would like for things to get back to normal, but health officials are concerned about the possibility of healthcare workers becoming overwhelmed.

While he's in favor of a hybrid teaching model, Taylor recommended Safford sports teams be allowed to continue playing it provides teenagers an outlet and keeps many motivated to do well in school.

Nearly one dozen parents spoke at the meeting and time and time again they spoke about their children failing classes while distance learning.

Parent Rob Carter was the first to speak at the podium. He spoke about the stress remote learning put on his entire family.

Coralee Allen, a single mom, said the district was making her choose between her financial situation and her children's education. She has no choice but to work, she said.

George Jacobson, a registered nurse at Mt. Graham Regional Hospital, said there were many nights during distance learning where tears of frustration were shed by his children and both their parents.

He found out he's not very good at teaching his second grader how to read, Jacobson said. Both of his children are now passing their classes, but only because they've been able to return to the classroom, which is a setting that's built for learning, he said.

"My kitchen table is not an atmosphere for learning. I've proven that," Jacobson said.

Janessa Jolly pointed out that SUSD offers distance learning already and most parents are not opting to use it.

"We're accepting the risks," she said.

Sarah Taylor, another parent, said going back to distance learning was "too drastic" and advocated for more safety measures being put in place, including temperature checks and more social distancing.

Several of the school board members attributed the increased numbers to those in the community who have grown lax when it comes to wearing masks and socially distancing.

School board member Matt Herrington said he was voting in favor of in-person learning because people can't weigh the cost of a handful of people getting COVID-19 higher than the "known damages and negative impacts" of distance learning.

Maybe the district can take extra precautions for those who are vulnerable to the virus, Herrington said.

"It's absolutely time for us to have faith that we're going to make it through this, trust in God and his help and his protection and I can promise you that as we do, we will get through it," Herrington said to applause.

Herrington, who voted against hybrid learning back in August, said he believes the board went against parents' wishes then and he pleaded with his fellow board members not to do it again.

Board member Craig Hackett said he doesn't believe the data supports the need to go back to remote learning.

Board member Julie Cluff told the crowd she agrees distance learning isn't optimal for student learning. She said she was in favor of hybrid learning until the rest of the community starts to do its part and the numbers start to fall again.

Douglas has asked every school district in the Gila Valley to consider returning to distance learning.

The superintendents in Thatcher and Fort Thomas have not yet responded to calls seeking comment.

Pima Unified School Superintendent Sean Rickert said Thursday night he sees no need to return to distance learning right now. While there have been a few instances where PUSD students and teachers have tested positive, the health department is doing an excellent job in contract tracing and having those people self-quarantine, he said.

Other things must be taken into consideration when making such decisions besides the state's benchmarks, he said.

"The best place for children to get an education is in the classroom," Rickert said. "The percentage of parents who want to send their children to school has increased not decreased."