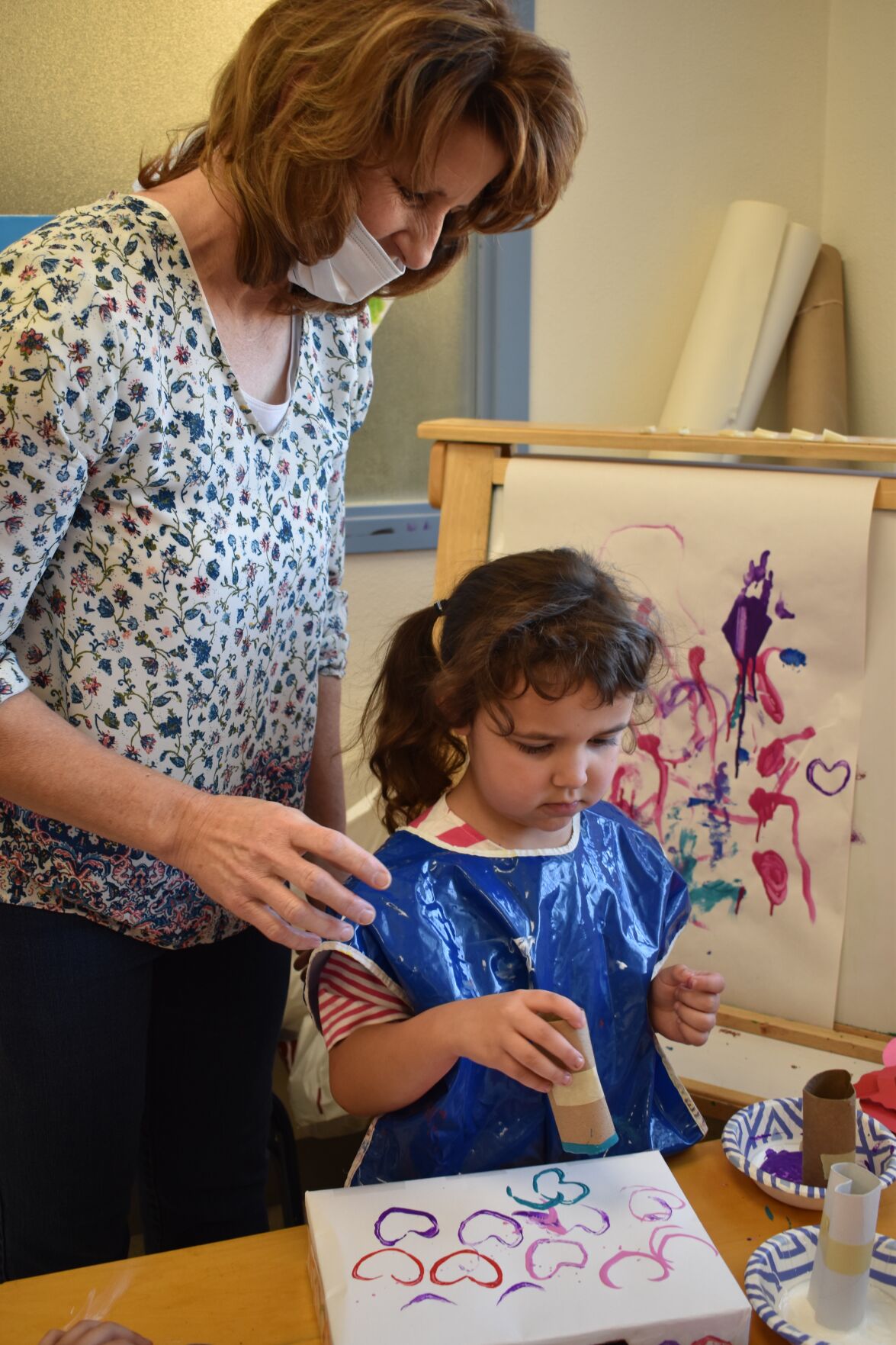 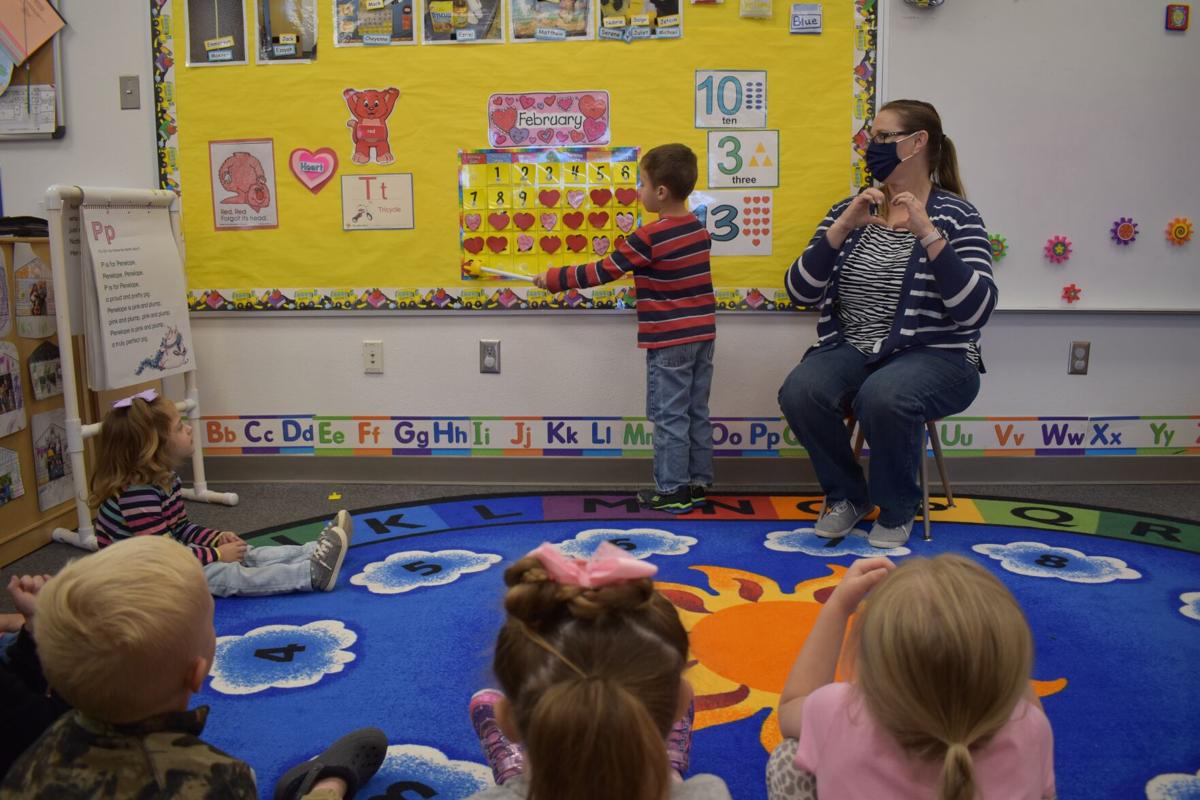 D'Anne Lutz and Hyrum Pace, 4, help the rest of Hyrum's pre-school class learn all about patterns and colors. 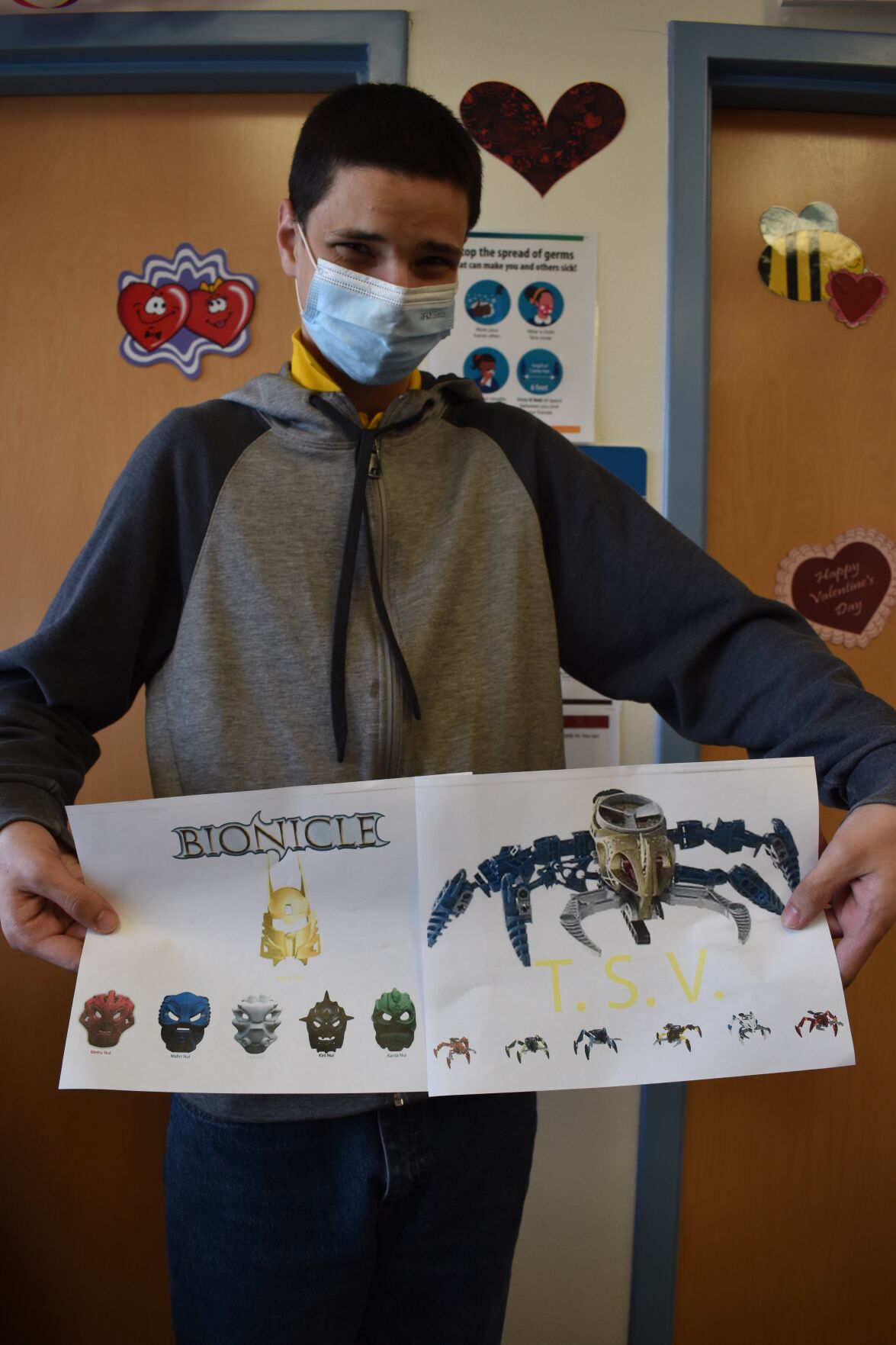 Lincoln Olsen, 16, shows off an art project he completed at his home school upon his return to Dan Hinton School recently. 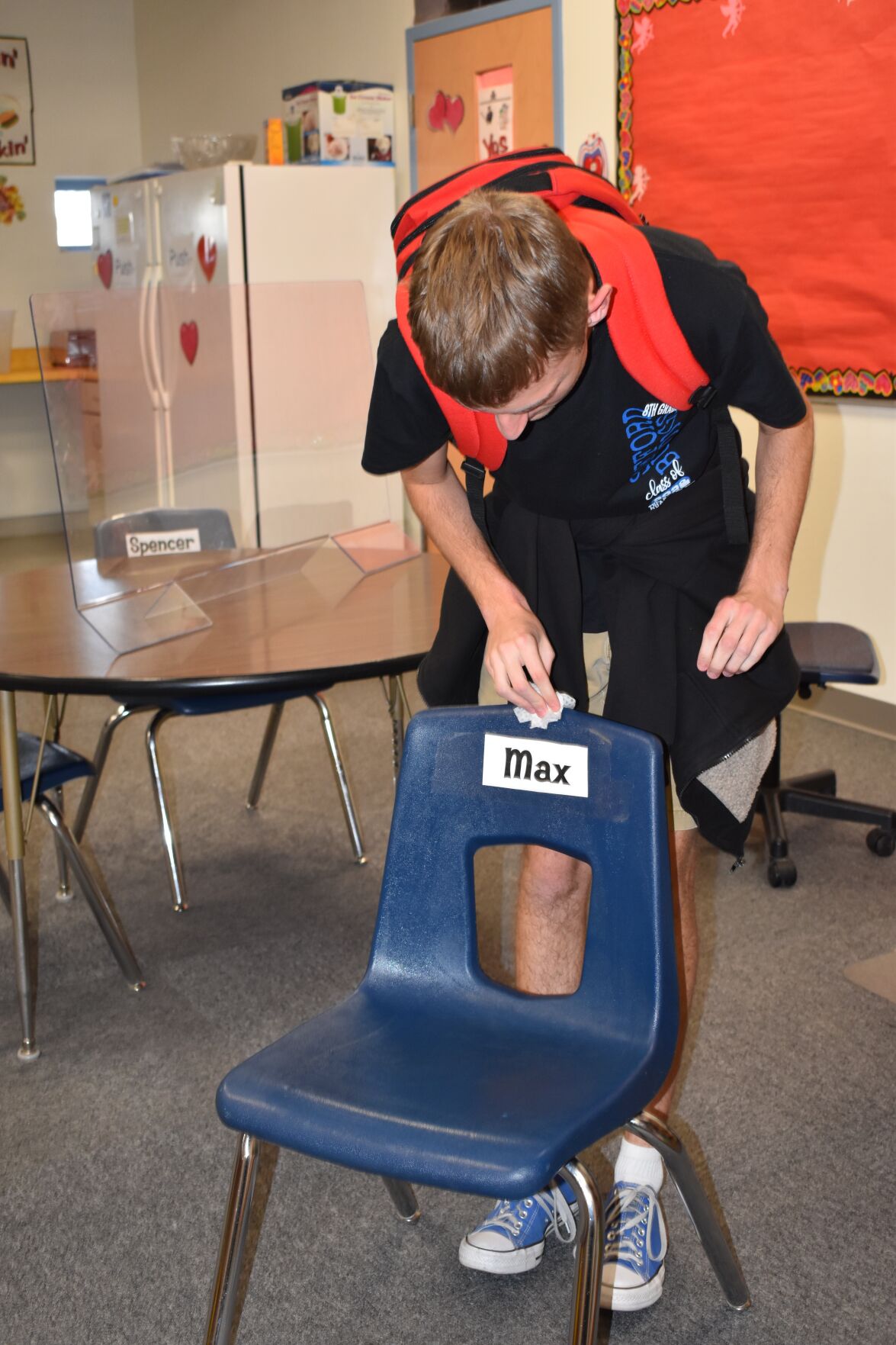 Max Taggart, 18, carefully takes time to wipe off his seat at Dan Hinton School. The students earn money while learning life skills at the school. 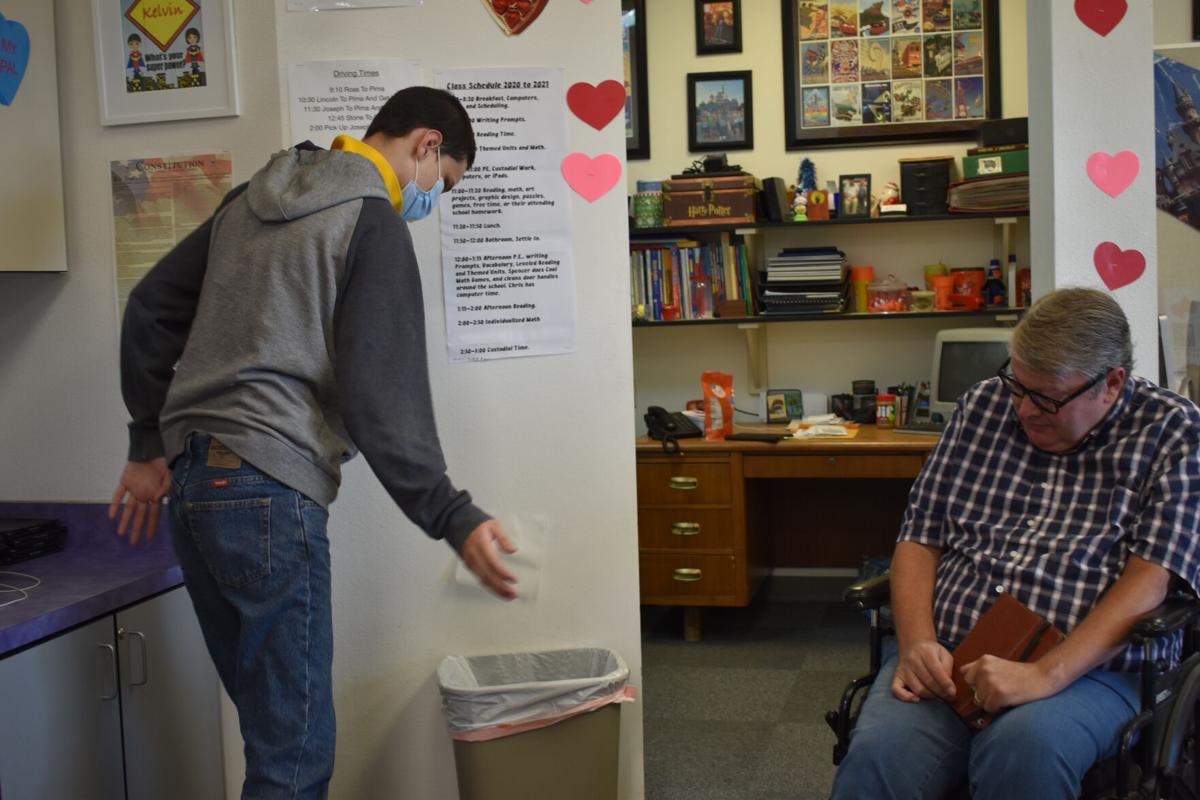 D'Anne Lutz and Hyrum Pace, 4, help the rest of Hyrum's pre-school class learn all about patterns and colors.

Lincoln Olsen, 16, shows off an art project he completed at his home school upon his return to Dan Hinton School recently.

Max Taggart, 18, carefully takes time to wipe off his seat at Dan Hinton School. The students earn money while learning life skills at the school.

It’s been 23 years and Kelvin Taylor still tears up thinking about the end of his first day of teaching at Dan Hinton School and Brighter Days Preschool in Pima.

He’d spent all day feeling a little overwhelmed at the school that caters to children with special needs. Some are on the autism spectrum, others have Down syndrome or cerebral palsy and most have some level of intellectual deficiency.

“That afternoon, I had a student who was non-verbal and very strong. I think she was about 6-foot-6 and everyone was worried about me being in my wheelchair,” Taylor recalled. “I remember she kept pointing at the wheelchair and making noises. I figured out she was wondering why I was in the wheelchair and I told her, ‘I was in an accident and my neck was hurt really bad so I can’t move very good. I have to be in a wheelchair to get around.’ And this big, sweet girl kissed her hand and touched the back of my neck and then I was home.”

Some version of that moment happens just about every day at the school and it’s why Taylor keeps coming back.

Originally known as the Graham County Accommodation School, Dan Hinton School opened in 1970; the preschool was added years later after the federal government mandated services be provided to younger children in 1986. The students come from the Bonita, Fort Thomas, Pima and Thatcher school districts.

By combining finances, the school can provide intense one-on-one teaching opportunities along with psychological services and speech, occupational and physical therapy. The goal is to get students to the point where they can spend at least part of the day at their local schools. The students have their own kitchen and laundry facility where they can learn life skills and money. They also learn how to garden and they go on field trips and participate in Special Olympics and the Graham County Fair.

There are 27 K-12 students and 37 preschool students, Superintendent Troy Thygerson said. Another 12 students are in a program that helps them transition to kindergarten.

The school’s five teachers have two aides each, which allow them to provide individual instruction not possible in other schools, Thygerson said.

Thygerson, who began his 29-year career in special education, became the school’s superintendent July 1, and has nothing but praise for his staff.

Each child has an individualized education plan and his staff is committed to making sure they do their best to help the children attain those goals, he said.

“You’re in education to make a difference and they are making a difference,” Thygerson said. “If I’m having a bad day, I can walk into a classroom and my mood is changed in one second because those students are trying hard. They’re doing their best and they’re making progress and it’s just a great feeling. It’s exciting to see that progress as they mature and grow.”

At Dan Hinton, which was named after a former Graham County School superintendent, the students are split into three groups. Taylor handles the older students, Laura Weech teaches the little ones and Darcy Barney teaches those in the middle. (Students are able to stay at the school up until they turn 22.)

Barney started out her career as a pre-K and fifth-grade teacher but decided to pursue her master’s degree in special education because she felt she was failing some of her students. She’s been at Dan Hinton 15 years.

Helping children hit milestones that would not have been possible without the intensity of special education provides her a level of reward and satisfaction she didn’t get in traditional education, Barney said.

She has worked with some of her students five years or more, she said.

“That’s a long time to develop relationships with them and their families and that’s pretty meaningful,” Barney said. “Once families experience the Dan Hinton experience they understand that this is very much a family atmosphere.”

Taylor also started out his career in traditional education, but after substitute teaching for a couple of special education teachers he fell in love with the students.

“The kids have some specific special needs and it’s a place where you can feel you’re really making a difference,” he said. “There’s nothing else like it, these are special kids. They have great personalities, they’re fun. There are challenges as well, as with anything, but overall it’s been great. I wouldn’t have stuck around so long if it wasn’t.”

Just as with any student, the trick to connecting with a special-needs student is to spend time with them and to experiment, Taylor said. Even students who are non-verbal can let you know what their needs and wants are, he said.

“They all have different personalities and as you spend more and more time with them that comes through,” he said. “Kids are kids and that’s one of the things that I love about these guys. They are just kids… and I want the time they spend with me to be the most productive, meaningful and good as it can be because out in the world they don’t always get that.”

Weech, who began teaching at Dan Hinton 18 years ago, said she fits in at the school.

“I’m able to work one-on-one with kids and I handle special brains better than I handle large amounts of kids,” she said.

What people don’t understand is kids with disabilities can learn and achieve, she said. They each have individual interests and talents and if you’re paying attention you’ll notice them.

In fact, she recently realized a non-verbal little boy in her class can read. If she lays out flash cards on the table and asks him to pick one out, he selects the right one every time.

Weech said she constantly tells people that what a child scores on a test is not a “true indicator of the value or potential of a child.”

Weech deeply appreciates Barney not only as a colleague, but as a mother. Her son, who has cerbral palsy, autism, obsessive compulsive disorder and significant learning disabilities, was in Barney’s class for seven years. Because of her work with him, he was able to go to Pima High School where he was able to hold his own.

“Darcy is a rock star. I don’t know how else to say it. She taught my son and if not for her influence, he’d not be able to read today,” Weech said.

As for Taylor, he has a “genuine, pure love for the children and is able to find something valuable in each kid,” she said.

While people compliment her on her patience, Weech said they’re wrong.

Many of the students at Dan Hinton started out at Brighter Days Preschool taught by D’Anne Lutz and Leann Thygerson.

Some of the pre-K students have speech or language problems and others are developmentally delayed in more than one area.

Their job is exactly the same as that of Taylor, Barney and Weech, Lutz said. They want to help their students get to the point where they can spend as much time as possible at their home schools. Some students are so intellectually challenged that’s not possible, but it is possible for the vast majority, she said.

“I think special-ed people are the only ones trying to put ourselves out of a job,” Lutz said. “We’re working to help the kids function like all of the others. We want to give them the tools to help them master their issues.”

“We’ve had children come in not talking at all and after two years or two and half years, depending on when their birthday is, it suddenly clicks for them and they talk and they don’t need us anymore,” Lutz said.

Other breakthroughs are much more subtle, she said. She remembers the tears when a child learned how to sign “more” rather than throwing a tantrum several times a day.

“It’s the little things you have to celebrate because these kids face a lot of challenges,” Lutz said. “A lot of my job is trying out different things that work for different kids. We have to be very flexible. If this doesn’t work, we have to try something else. We’ve got to have a lot of patience and flexibility because what works for one kid won’t work for another kid or what worked for this child this week may not work for him next week so you have to continually think of things to do what you need to do for him.”

Leann Thygerson has spent 11 years helping little ones transition from preschool to kindergarten. At this age they’re eager to learn and love their teachers unconditionally, she said.

Every day is a challenge, but the rewards are worth it, she said.

“We just have to watch for cues, and when we learn their code — kind of what they do — we can learn that what their actions are and what they’re trying to say typically means what their intentions are,” she said.

All of the teachers said they couldn’t do their jobs without the aides.

Leann Thygerson said everyone has an “off” day once in awhile.

“Having the aides helps because some days I might not be listening in the right direction for what a child needs and I’ll look at her and she’ll say, ‘I bet she needs this.’ It helps because, between us, we’re getting different perspectives on what we’re listening to or watching,” she said. “Sometimes you just strike out and you don’t know what they want and they might not even know what they want, they’re just uncomfortable.”

It’s especially true of children on the autism spectrum, she said.

“All of this stuff is information, the colors, the noise, the lights, the textures, everything, and when they get overstimulated, they will blow a fuse,” she said. “We’ll take them into the quiet room, calm them down and let them stay a while. Sometimes the only thing we can do is let them have some down time.”

At the end of the day, Taylor said he can always find something that happened that makes him excited about going back to school.

“It can be a student who doesn’t usually respond you might turn and give you a smile or another student who can’t verbalize very well might say, ‘Hi’. It can be as simple as that or it might be as complex as a student writing a great essay or learning how to spell their name,” he said. “In this business there are victories that may not seem big to regular education. ‘Wow, they learned how to spell their name,’ but they’ve been working on that for three years. They spelled their name. That’s a big deal.”