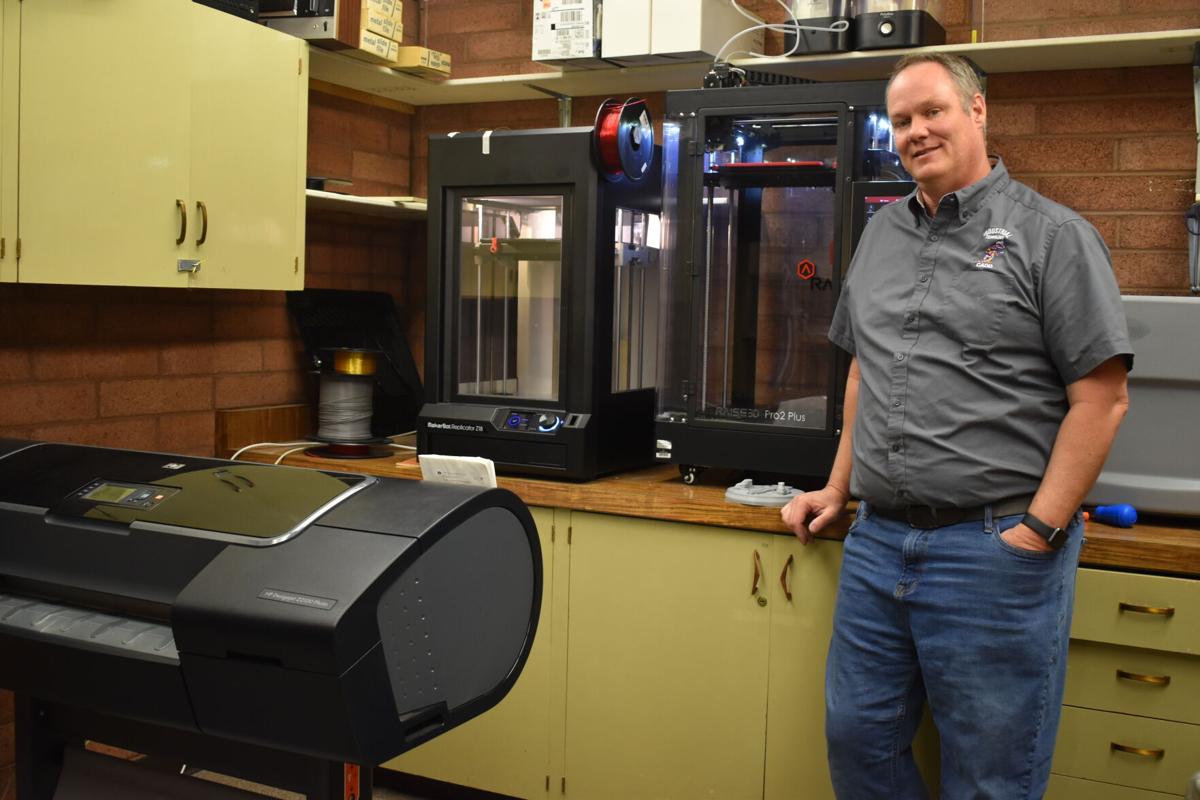 Eastern Arizona College Industrial Technology Division Chairman Doug Griffin shows off some of the cool tools his students get to use. They include multiple 3D printers. 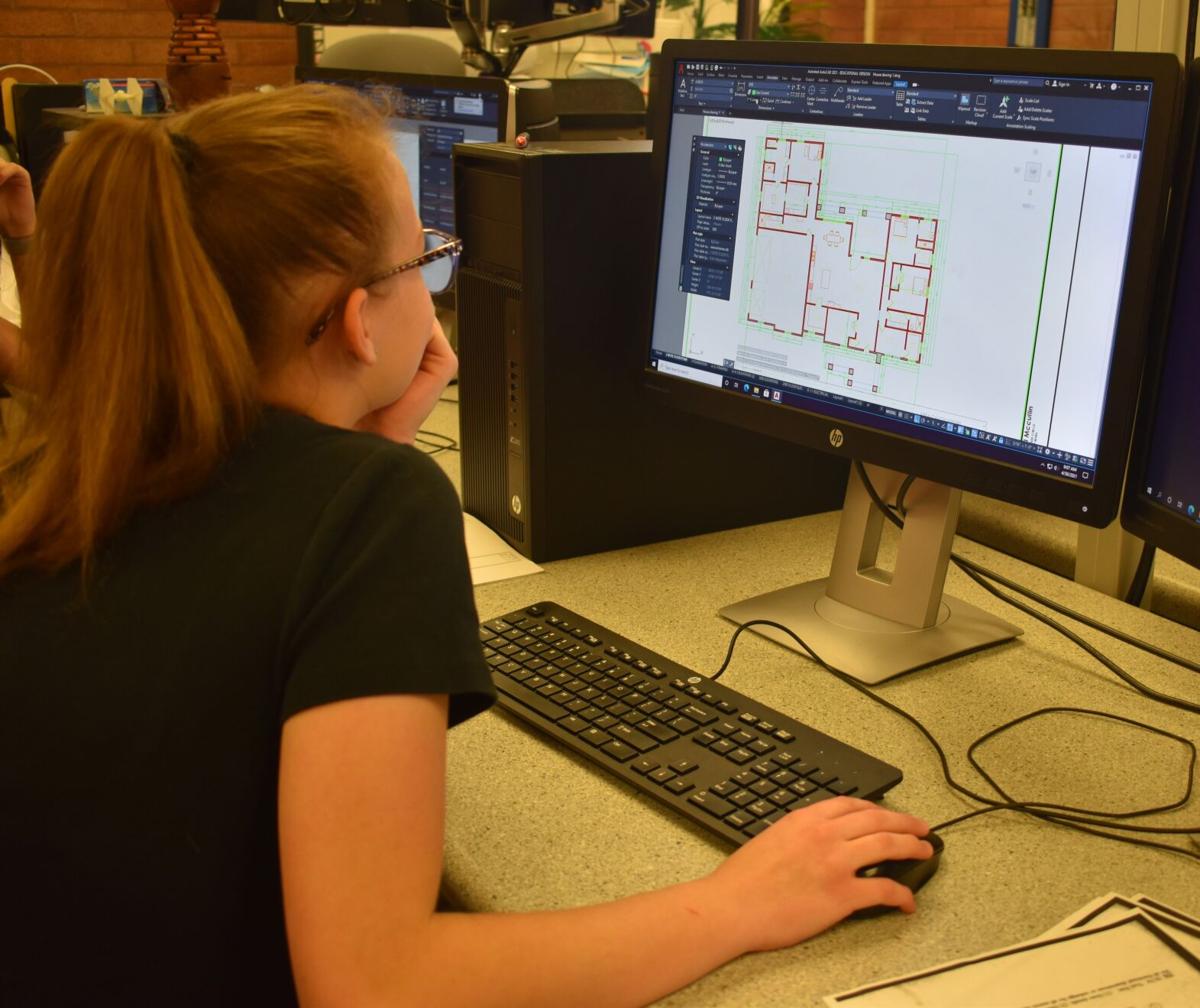 Isabel McCullin, 16, a Safford High School student received a 50 out of 50 on the home she designed for Doug Griffin's  Introduction to Computer-assisted Design and Drafting Technology class at Eastern Arizona College. 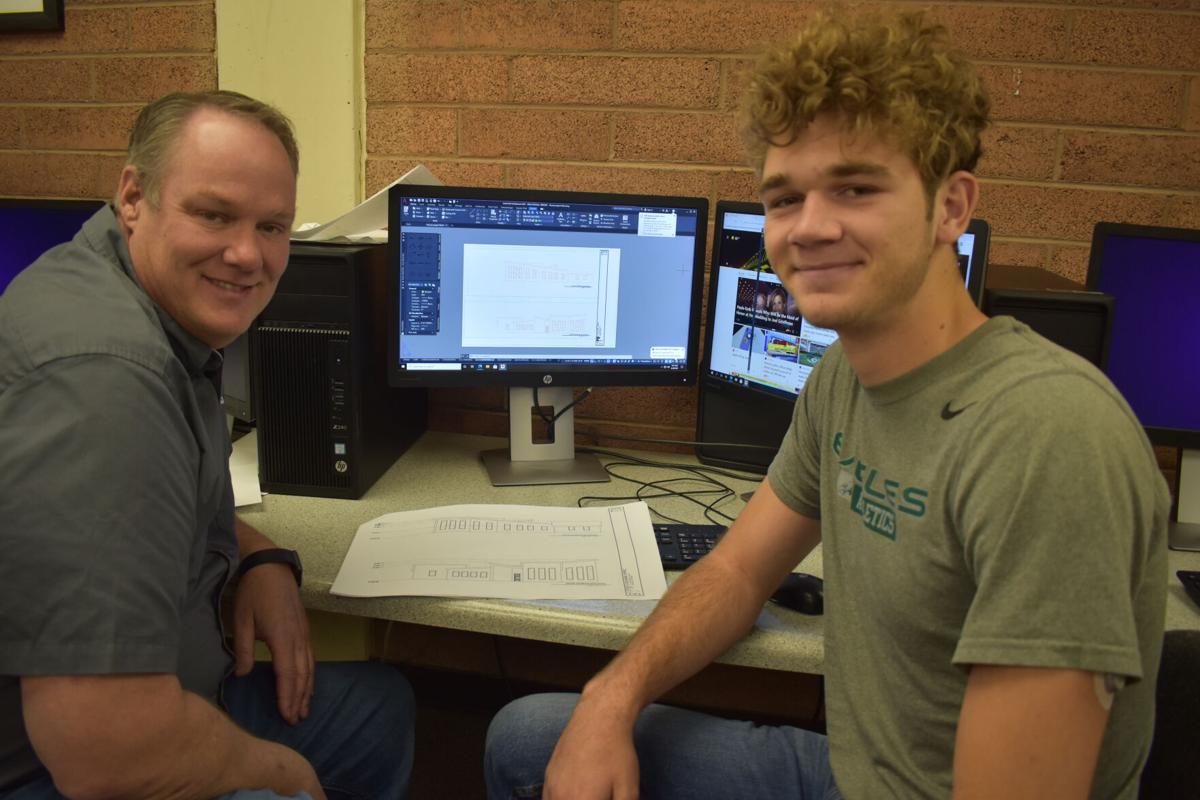 Cody Mullenaux, 17, a Thatcher High School student, is taking Doug Griffin's Introduction to Computer-assisted Design and Drafting Technology at EAC and hopes to one day design houses as a side gig.

Eastern Arizona College Industrial Technology Division Chairman Doug Griffin shows off some of the cool tools his students get to use. They include multiple 3D printers.

Isabel McCullin, 16, a Safford High School student received a 50 out of 50 on the home she designed for Doug Griffin's  Introduction to Computer-assisted Design and Drafting Technology class at Eastern Arizona College.

Cody Mullenaux, 17, a Thatcher High School student, is taking Doug Griffin's Introduction to Computer-assisted Design and Drafting Technology at EAC and hopes to one day design houses as a side gig.

If images of pencils and T-squares come into your head when you hear the word “drafting,” you are way behind the times.

The high school and college kids who take Doug Griffin’s classes at Eastern Arizona College have at their disposal 42 computers, eight 3D computers, laser, vinyl and plasma cutters and all sorts of machines that use computer numerical codes to perform tasks.

“There used to be pencils when I first started teaching and then we got these things called computers and it was DOS-based,” Griffin said. “It was two-dimensional and then it became three dimensional and now we are processing textures. I can put Mt. Graham in the background of a house. I can add textures and colors and flowers and plants and reflections and people. It’s gone from this two-dimensional crude, rude drawing to a virtual object that I can send to the CNC machine or the 3D printers and it can be reproduced.”

Even better, that virtual object can then be shared with anyone working on that particular project, Griffin said.

Twenty-one years ago, Griffin was teaching drafting at Thatcher High School when he learned efforts were underway to create a new school district called Gila Institute for Technology. The idea was to give high school students an opportunity to earn college credits while learning skills they could use to launch careers right out of high school or give them a leg up when they entered college.

Griffin leapt at the opportunity to teach GIFT students.

Nowadays, Griffin teaches eight classes and is the industrial technology division chairman at EAC. He teaches Introduction to Computer-assisted Design and Drafting Technology and Advanced CADD to roughly 40 high school students from the Gila Valley, Morenci and Duncan.

The way Griffin explains it, drafting has become a language for builders.

“Whether it’s mechanical or civil or architectural, it’s in their language so they can understand what we want to do,” he said.

During his introductory class, he teaches his students how to use the software and they learn architectural and mechanical skills and some basic machining.

During their second year, they start creating renderings, he said. They make virtual renderings with textures and colors and make it realistic. He also starts showing how things are fabricated and built.

Along one wall in his classroom are a handful of student-made projectile launchers. He handed his students rubber bands, trampoline springs, magnets and weights and told them to create something that would shoot ping pong balls or golf balls and they did.

“They have so much fun with it and they don’t realize how much they’re learning. Everything they draw is three dimensional. They draw it up first. Visual it and then they produce it, 3D print it out and we’ll see if it works. It’s cool,” Griffin said.

You see, his students are taught to be problem-solvers and it’s a rare talent nowadays, he said.

“When we were in high school we had woodshop. Now, there’s nothing wrong with woodshop because it got us comfortable using tools and thinking and working through problems. But, nowadays kids don’t work through problems because they’re just ‘undo’ and start again,” Griffin said.

Griffin said he doesn’t allow his students to do that.

“I’m making these kids problem solve inside the classroom. I don’t care if they ever use drafting again, it’ll be good for them because they’ll be able to problem solve,” Griffin said. “If it doesn’t work, there’s a reason it didn’t work. Figure out why it didn’t work.”

He gave up on text books years ago, Griffin said. Since he knows the software so well, he just comes up with projects on his own. He knows exactly what he wants to teach them and how he can get them there.

On Friday, Isabel McCullin, 16, a Safford High School student, and Cody Mullenaux, 17, a Thatcher High School student, spent the morning in Griffin’s Intro to CADD class. Each of them recently designed their own home from start to finish. They spent 30 hours worrying about the home’s site, elevation, foundation, electrical system, floor plan and landscape features.

McCullin’s home is a four-bedroom, four-bath home that combines features from multiple types of homes, while Mullenaux’s home is a three-bedroom, two-bath modern home.

“I was planning to be a forensic anthropologist before, but now I think I’ll stick with this,” McCullin said. “It’s fun. It’s not as complicated and I like the teacher.”

Mullenaux, too, is a Griffin fan.

“Griffin knows,” Mullenaux said, emphasing the last word. “The other class calls his ‘Wizard’ because he is so good at this. Anytime we have a question, we can just ask him and he helps us with it.”

Although Mulleanaux said he plans to become HVAC certified, he wants to design houses on the side.

“All of the house designs my students turned in today I could turn into the Town of Thatcher and they could be built. Every one of them. That’s my goal,” Griffin said.

Griffin himself designs houses and commercial buildings on the side.

“I started doing real life projects for the students. We will go visit those houses. We will go on field trips and we will look at the houses. They’ll see me design a house and then see it being built and then they see the connection,” Griffin said. “The kids love that and I love doing that with them because then they’ll give me opinions about houses and it’s fun.”

Roughly half of his students go straight to work upon graduating from high school and the other half put themselves through college while working in jobs in the field they are studying, Griffin said.

“Mechanical is a pretty cool field and it’s different from architectural because it’s left brain versus right,” Griffin said. “You’ve got very mechanical, puzzle-orientated people or you’ve got more creative design people and it takes both sides.”

The beauty of it is more and more of his former students can now work from home, Griffin said.

Over the years, Griffin has discovered a few things about his students. Girls tend to be perfectionists who visualize things better. Duncan kids are better problem solvers than big city kids and video games aren’t as bad for students as you might suspect.

“The kids that play Minecraft and video games are my best students. They’re used to computers and the muscle memory skills that come with that,” Griffin said. “If a kid likes Minecraft or playing video games or played with Legos or Lincoln Logs, they need to take my classes.”

Some videogames are just mind-numbing, but others make you think, he said.

“Minecraft lets you be creative in your own world. Even playing video games and blowing up things, you’re actually seeing sense of space and modeling it inside a computer system. You’re seeing different worlds from a different perspective,” Griffin said.

He’s also learned that one doesn’t have to brilliant to do well in his classes or in his field.

“You just need to be able to understand concepts and the computer will do the work for you,” Griffin said. “You just have to have a good work ethic. We can make you successful.”