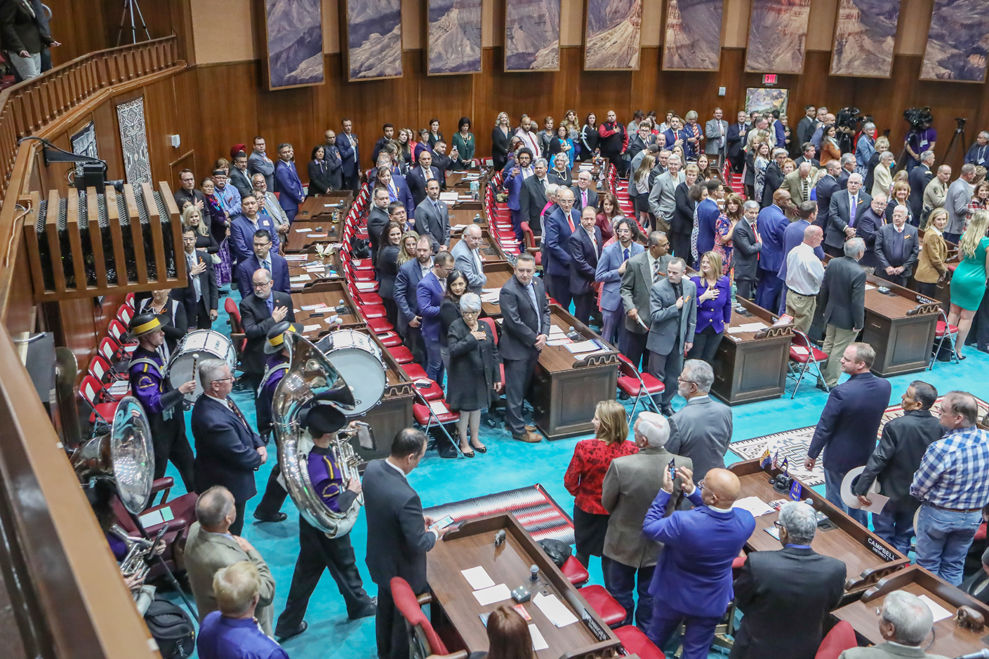 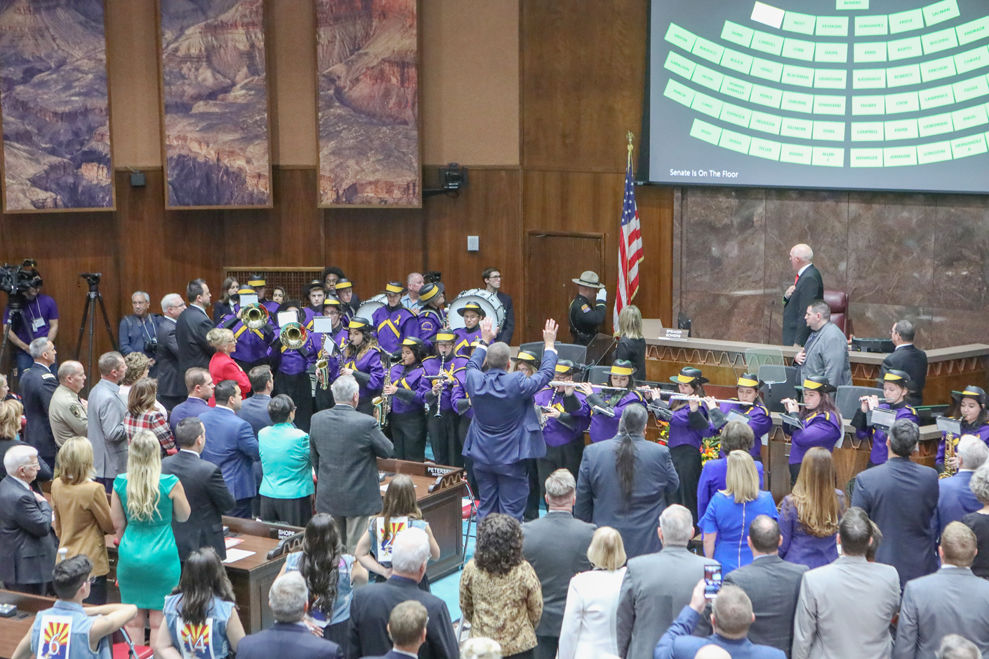 Eastern Arizona College’s Marching Band brought their talents to the State Capitol for a performance at this month’s legislative session opening.

Eastern Arizona College’s Marching Band brought their talents to the State Capitol for a performance at this month’s legislative session opening.

THATCHER — For the 56 students who make up the Eastern Arizona College Marching Band, a recent trip to Phoenix was an occasion for pride and excitement.

On Jan. 13, the EAC Marching Band — founded before Arizona achieved statehood — performed at the opening session of the Arizona State Legislature, as well as appearing live on ABC 15’s morning news show. The state’s only community college marching band, as well as the oldest, it continues a long musical tradition at Eastern Arizona College.

Chartered in 1888, EAC, located in Thatcher, is Arizona’s oldest community college. Shortly after its founding, a small group of musicians came together to form the marching band. The exact year the band was founded is uncertain, but they have been playing for over a century. In 1912, they performed the national anthem during a day-long event called the Musical Convention of the Gila Valley; in 1930, the band was made up of 40 students.

The 56 students in today’s band represent a cross-section of Arizona and share a passion for music. They include Christian Clement, of Willcox, and Carlee Saline, of Pima. Clement said the band practiced for its Jan. 13 performance throughout the fall semester.

Saline said it was very exciting, and a great honor that the band was chosen.

“I’ve been involved in music since I was about six years old,” Saline added. “I started learning to play the piano, and then in middle school I joined the band. Since then, I’ve learned to play several instruments.”

Clement also started band in middle school, but his love of music goes back much further. “It’s been a part of me ever since I can remember. My mom is a musician, so I’ve always been surrounded by music. I just love doing band.”

Clement said he wanted to be part of the EAC Marching Band after participating in the college’s annual Band Day, which showcases and evaluates high school marching bands from around Arizona, for four years of high school. Clement also chose EAC for its affordability — general tuition and fees are $2,700 per year — and closeness to home.

Saline listed the college’s small campus, welcoming faculty and band scholarships as reasons for choosing EAC. “The campus is super small; it’s easy to get around and figure out where I’m going,” she said. “Most teachers are very friendly and personable, and can usually remember you by name within the first month. It was an easier choice because joining band gave me an opportunity for a scholarship, so most of my tuition was covered as well.”

Saline also took advantage of EAC’s dual enrollment program for high school students. “I’ve been taking EAC classes since my sophomore year of high school, and after I graduated I wanted to keep going toward my Associate degree,” she said.

“The kids come here from all over the place and they have an immediate family,” said DeSpain. “People feel comfortable to come in and just be part of the band, and they make lasting friendships.”

“As soon as you walk in these doors, you’re part of the family here,” Clement said.

DeSpain said the band was invited to Phoenix after EAC’s Constitution Day Commemoration, an annual event featuring speakers on aspects of the U.S. Constitution. Last year’s invitee, Speaker of the House Rusty Bowers, gave his speech wearing an EAC Marching Band T-shirt presented to him by the band. DeSpain said that, at a lunch following the event, Bowers asked drum major Jacob Culver if the band could play for the legislature’s opening session — and, with EAC President Todd Haynie’s swift approval, the date was arranged.

At the Jan. 13 performance, band members displayed their hometown district number so their legislators could meet with them and hear how state funds help change student lives.

“It’s an honor, and the kids were very excited to do it,” DeSpain said. “I don’t know that they’ve ever had a band come and do this, so it’s unprecedented.”