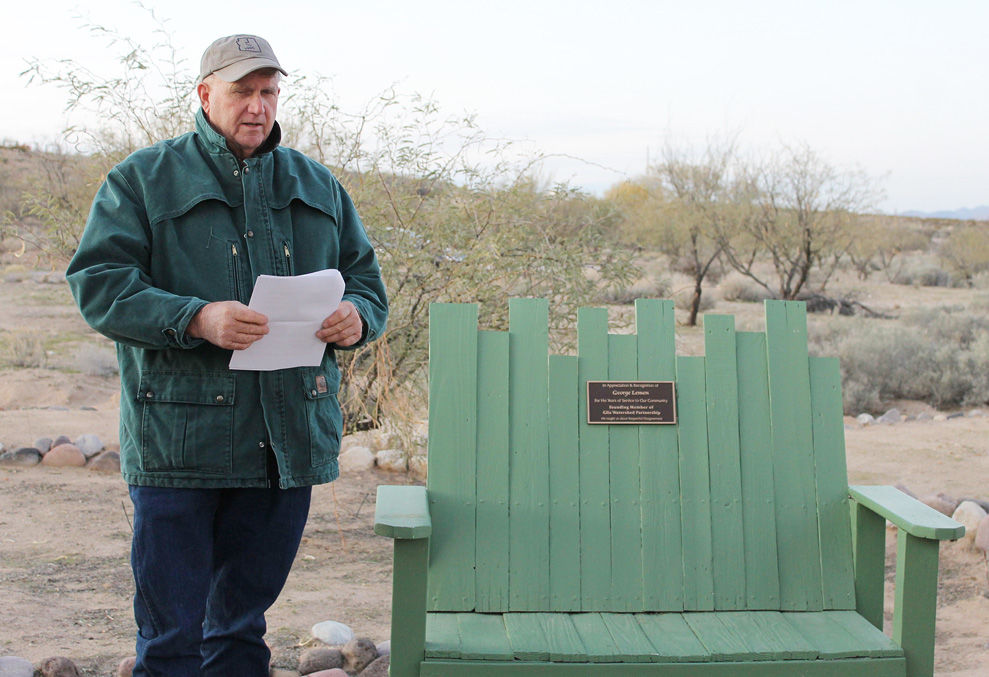 Gila Watershed Partnership board member Bill Brandau dedicates a plaque in recognition of the late George Lemen, a founding member of the GWP. 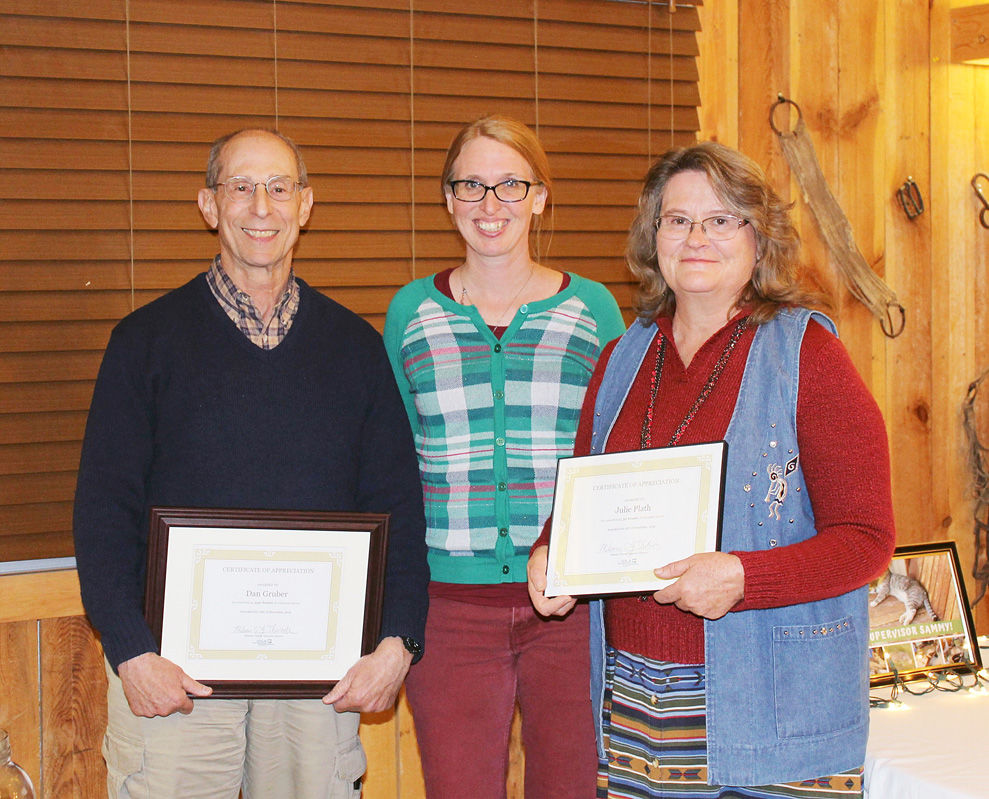 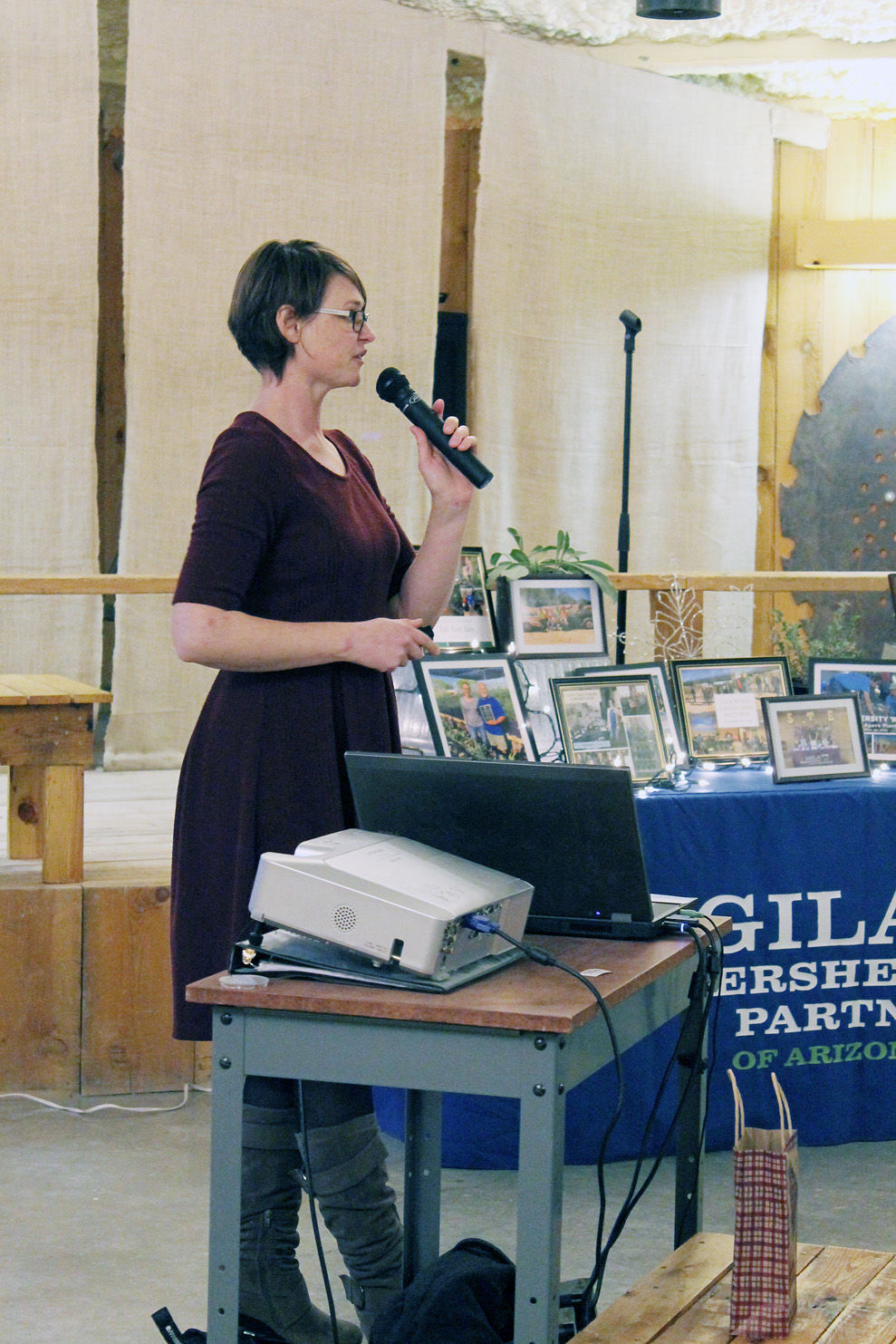 Gila Watershed Partnership board member Bill Brandau dedicates a plaque in recognition of the late George Lemen, a founding member of the GWP.

SAFFORD — The Gila Watershed Partnership met the evening of Wednesday, Dec. 18, at the Discovery Park Ranch House to look back on 2019 accomplishments and ahead to 2020 goals.

First, though, the GWP paid recognition to a founding member.

In the Discovery Park pollinator garden, GWP members dedicated a plaque in appreciation and recognition of the late George Lemen’s years of community service. Lemen was a founding member of the Safford-Clifton-Duncan Watershed, which became the Gila Watershed Partnership, served the Town of Pima as councilmember and mayor, and was active with People for the West.

In dedicating the plaque, GWP board member Bill Brandau recalled Lemen’s joviality and his introduction of the idea of respectful disagreement.

Members then moved to the Ranch House for the annual update and volunteer appreciation dinner.

“Volunteers are the lifeblood of an organization like this,” GWP board chairman Phil Ronnerud said, and three volunteers were honored with certificates for their service: Dan Gruber, who served 250 hours, Kay Dugi, who served 100 hours; and Julie Plath, who served 50 hours. GWP science and outreach manager Kara Barron presented Gruber and Plath with their certificates; Dugi was unable to attend the event.

“This was a huge year for us. We pulled out all the stops with our programs and had a lot of fun doing it,” said GWP Executive Director Melanie Tluczek.

This year saw two successful native plant sales at the Gila Native Plant Nursery; Tluczek said 687 plants were sold. The nursery housed 24,000 plants, of 102 species, at the end of 2019.

The pollinator garden was also enhanced in 2019, with the addition of shade-sail structures and an information kiosk.

A final honor remained that evening, as Tluczek presented retiring board member Brandau with a “special GWP hat” in recognition of the many hats he has worn.

“He is one of the driving forces behind this organization,” she said.

Brandau will remain involved with the partnership as a member of its science and technical advisory committee.

GWP habitat restoration manager Bethany Drahota said they were working on sites ranging from 10 acres to over 60, “trying to create pockets of native vegetation in a sea of tamarisk.”

Barron said the GWP plans to start quarterly cleanups of the San Francisco River, is working on an updated Junior Ranger booklet and will work with the Arizona Department of Environmental Quality to delist the river as impaired.