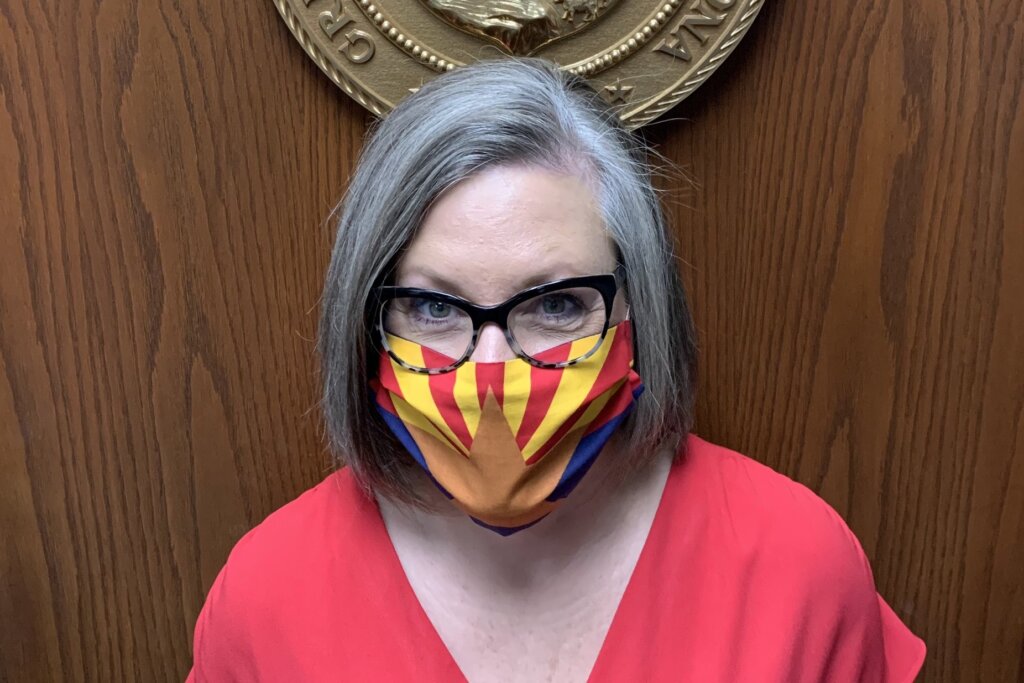 The legislature is weighing in on the ongoing feud that led Secretary of State Katie Hobbs to file a Bar complaint against Attorney General Mark Brnovich, using the proposed state budget plan to ensure that Brnovich’s office has sole authority to make decisions about the legal defense of Arizona election laws.

A budget reconciliation bill approved by the House and Senate appropriations committees on Tuesday states that the attorney general has “sole authority” to defend state election laws, and that his authority should not be delegated to the secretary of state — a constitutional officer — or any other state officials. As such, the attorney general would have exclusive authority to direct legal defenses, appeal rulings, intervene on the state’s behalf and “make all strategic decisions regarding election litigation.”

Both provisions are only temporary. The “sole authority” provision expires in January 2023, while the legal counsel law expires in June of that year, when the 2023 fiscal year ends. Brnovich and Hobbs are both likely to be out of their respective offices after 2022. Brnovich is term-limited and cannot seek another term as attorney general, while Hobbs is widely expected to run for governor next year.

In addition, the budget bill strips Hobbs’s office of its authority over the Capitol Museum and gives it to Legislative Council.

Lawmakers’ move to clip Hobbs’s wings comes amid two-plus years of friction between the Republican attorney general and the Democratic secretary of state largely revolving around their respective positions on election law and related litigation. The discord between the two statewide elected officials reached a new level after Hobbs last year filed state Bar complaints against Brnovich, his chief deputy and other lawyers at the Attorney General’s Office.

In a statement provided to the media, Hobbs cast the budget provisions as partisan power plays by a Republican-controlled legislature determined to limit voting rights and restrict her authority.

“All year, our legislature has worked to undermine our elections — from a wave of bills to make it harder to vote to the ridiculous ‘audit’ taking place at the Coliseum. It appears their next step is an attempt to undermine Arizona’s Chief Election Officer and prevent me from doing the job Arizona voters elected me to do,” Hobbs said. “The fact that the legislature has singled out me and my Office for these unjustifiable restrictions — restrictions which expire at the end of my term — make it clear what this is really about: partisan politics.”

Katie Conner, a spokeswoman for Brnovich, described the changes as “necessary to ensure the faithful defense of the State’s election integrity laws and to eliminate confusion created by the Secretary of State about who speaks for Arizona in court.”

“The Secretary of State’s decision to file politically-motivated bar complaints against AGO lawyers and target their professional standing and reputation has fundamentally altered the historical track record of the offices working together despite differing political affiliations. The assistant attorneys general have steadfastly adhered to their statutory and ethical obligations. Their livelihoods should not be threatened for political purposes,” Conner said in a press statement.

In her Bar complaint, Hobbs alleged that Brnovich, Chief Deputy Joe Kanefield and a half dozen other attorneys in their office violated rules of ethical conduct in a handful of election law cases where the attorney general represented the secretary of state.

Hobbs alleged that the AG’s office pursued legal arguments contrary to her wishes. In some instances, Brnovich withdrew from representing the Secretary of State’s Office and intervened on the opposite side of the case. At times, Brnovich or his employees publicly disparaged Hobbs for her actions, the secretary wrote.

“Attorney General Brnovich has engaged in a pattern of behavior — directed at me and my office — that violates his ethical duties as an attorney. He frequently sought to substitute his judgement for my own and allowed his political preferences to interfere with his obligation to represent me as a client, in my pursuit of the best interests of Arizona voters,” Hobbs said in a statement provided to the Arizona Mirror. “Unfortunately, it appears that AG Brnovich isn’t asking forgiveness for his behavior — he’s asking our legislature to authorize it.”

Ryan Anderson, a spokesman for Brnovich, said confidentiality rules prevent the Attorney General’s Office from responding to the specifics in Hobbs’s complaint, but said, “The AGO denies each and every allegation the SOS has raised.”

Alberto Rodriguez, a spokesman for the State Bar of Arizona, said the complaint is under investigation.

During debate over the budget on Tuesday, Democratic lawmakers accused their Republican counterparts of targeting Hobbs for partisan reasons. Sen. Lisa Otondo, D-Yuma, called it a “power grab.”

“I really believe this is not about policy, but about politics,” Otondo said in the Senate Appropriations Committee on Tuesday.

Democratic lawmakers noted that the law expires at the end of Hobbs’s term.

“I worry that it’s political, that it’s about who the secretary of state is and who the attorney general is,” said Sen. Sean Bowie, D-Phoenix.

As our valued readers, we want to hear from you. Please take a moment to fill out the survey below. - Thank you, Eastern Arizona Courier
HELP US GROW
Make a tax-deductible donation.

Rep. Regina Cobb, R-Kingman, defended the change, saying the secretary of state has gone in the opposite direction of the attorney general, then charging the state for extra money to pursue litigation. The proposed law, Cobb said, will likely save the state a lot of money.

Republican legislators took umbrage with Hobbs’s Bar complaint, saying that — not the move to strip her of her authority over the legal defense of election laws until her term ends — was an inappropriately partisan move.

“I don’t know what’s more political than the secretary of state submitting bar charges against the entire upper echelon of the AG’s Office,” said Sen. Vince Leach, a Tucson Republican. “I would say the unprecedented attack on our attorney general, his chief deputy and many high level attorneys is uncalled for.”

The existence of the complaint was revealed by Leach during the Senate committee hearing when he read a statement he received from Brnovich’s office.

Sen. David Livingston, a Peoria Republican, said he would’ve been “much more aggressive” with the legislation if he’d known about the Bar complaint.

Democrats also accused the Republicans of taking away the secretary of state’s authority over the Capitol Museum in retaliation for a 2019 incident in which she hung an LGBT pride flag and a transgender pride flag over the old Capitol building. Hobbs said she did so with the permission of the museum’s director. However, Legislative Council, which manages the building, ordered the flag removed on the grounds that Hobbs didn’t go through the proper channels.

GOP lawmakers denied that the change was motivated by the flag incident.

“Oh, I have an issue with that, but this has nothing to do with that,” said Rep. John Kavanagh, R-Fountain Hills, who added that no one raised any such concerns when lawmakers originally shifted responsibility for the museum from Legislative Council to the secretary of state.

Rep. Michelle Udall, R-Mesa, said Legislative Council will likely be able to make better use of the museum than the Secretary of State’s Office, while Cobb said Hobbs is “an elected official, so performance evaluations are not necessary.”

“We just determined that that is who should do the job,” Cobb said.

The changes affecting the Secretary of State’s Office aren’t the only election-related matters in the budget.

One budget bill directs the state’s auditor general to look into several issues that have been fodder for conspiracy theorists who have made baseless claims that the 2020 election was rigged against former President Donald Trump and that President Joe Biden won several swing states, including Arizona, through fraud.

The bill instructs the auditor general to conduct a “special audit” of private, nongovernmental grant money received by the Secretary of State’s Office, Maricopa County and Pima County election officials in 2020 for things like voter education efforts, poll worker recruitment and combating misinformation. Nine counties, in addition to the secretary of state, received grants from Center for Election Innovation and Research, but the budget only calls for audits of Maricopa and Pima, the state’s two largest counties, both of which Biden won.

The auditor general will also be required to look into Maricopa County’s 2019 contract for ballot tabulation machines from Dominion Voting Systems. Dominion has been the subject of rampant conspiracy theories and baseless accusations from Trump supporters who falsely claim the election was fraudulent. The budget does not direct the auditor general to look into the other 14 counties’ voting machines.