Lafe Nelson music teacher Belinda Britt sprays down the risers where her students sit during class. 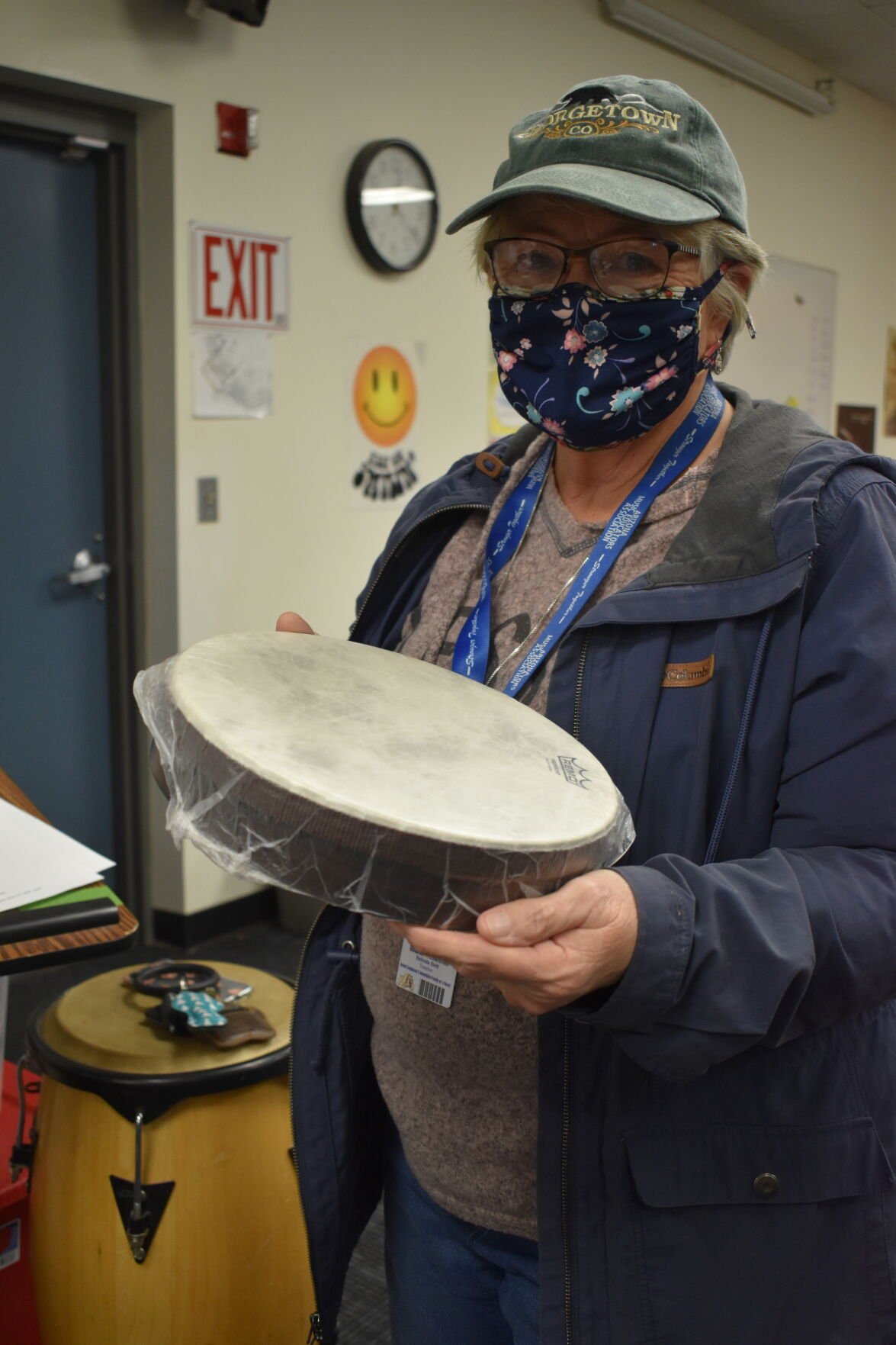 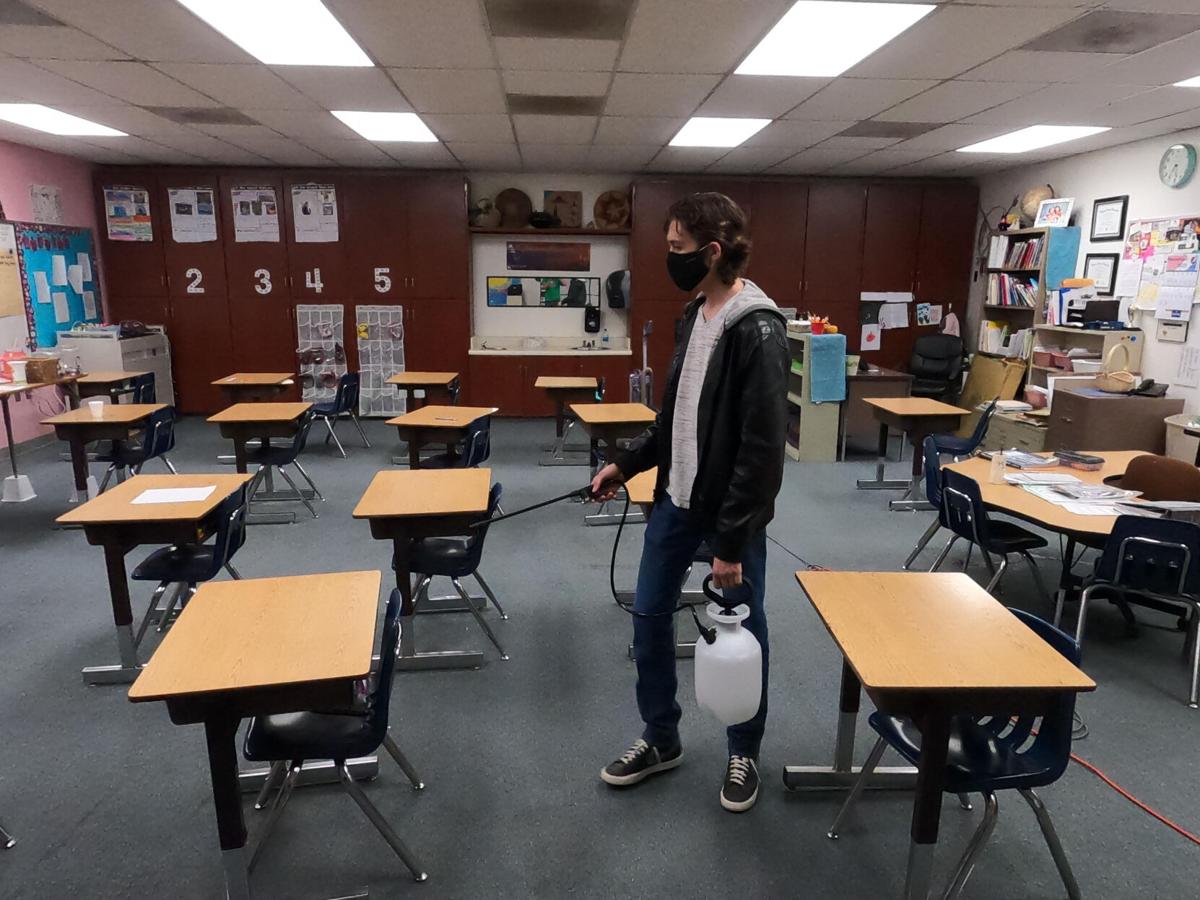 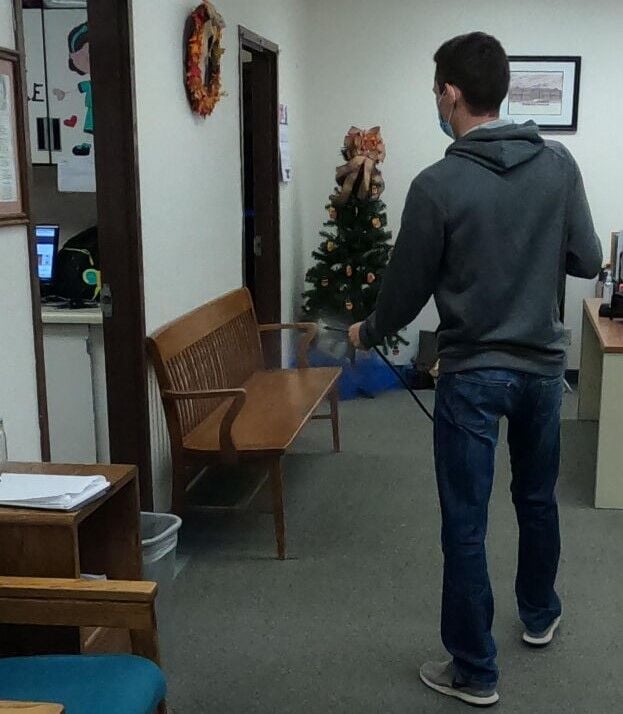 A member of the SUSD cleaning crew sanitizes an office. 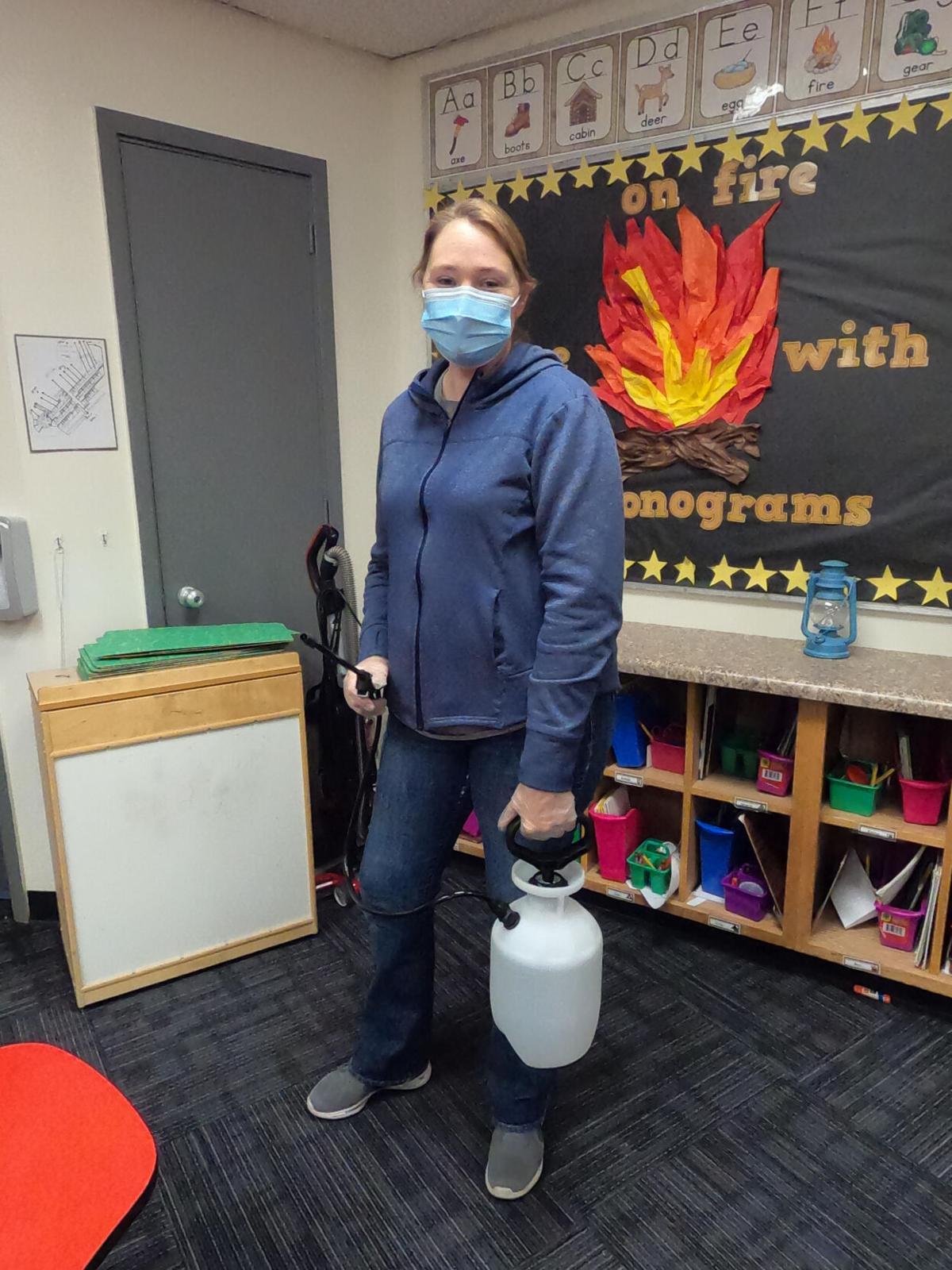 Lafe Nelson music teacher Belinda Britt sprays down the risers where her students sit during class.

A member of the SUSD cleaning crew sanitizes an office.

The folks in charge at Safford Unified School District had dozens of questions racing through their minds over the summer, but one of the biggest ones was: “How do we keep nearly 3,000 students safe, not to mention their teachers and support staff?”

A pandemic was sweeping the world and with no vaccine immediately available, officials had to figure out what they could do if and when students were allowed to return to the classroom.

The answer, as it turns out, revolves around “teamwork.”

Phillip Nelson, SUSD’s maintenance and transportation supervisor, said the state’s education and health departments put out guidelines that were helpful, but the district had to work out some specifics for themselves.

For example, the school districts were told the number one priority was getting students to wash their hands, but when he began to do the research, Nelson said he soon discovered not all hand sanitizers are created equal. Some contain alcohol which evaporates quickly and dries out skin, some are considered unhealthy for children and some were outrageously expensive. There were also differences between gel sanitizers and their liquid counterparts.

“I had to make a lot of calls,” Nelson said of his research.

Ultimately, after hearing everything he had learned, the district decided soap and water was the safest, most effective route to go, Nelson said. Hand-washing stations have been rented and placed all around each of the district’s six schools, the district office, transportation and tech center and the David M. Player Center for the Arts.

Normally, Nelson has an assistant, two maintenance people and three janitors. Thanks to the Coronavirus Aid, Relief, and Economic Security Act, the district has been able to hire part-time people to help out for four hours each per night.

“It would have been very difficult for the district to bring on additional employees,” Nelson said.

Torey Leitzke, Safford High School principal, said there were a lot of meetings over the summer to discuss what school would look like and who would play the various roles. It was clear from the start Nelson’s crew couldn’t come into every classroom every hour to sanitize.

As a result, teachers spray students’ desks, door knobs and other surfaces that might contain the virus during passing periods and other convenient times and at night, Nelson’s team goes in and does a more thorough job sanitizing things with a special acid-based sanitizer.

Students have even been stepping up and helping the teachers sanitize between classes, Leitzke said.

Both Leitzke and D’Anna O’Mera, principal at Lafe Nelson Elementary School, said their students have been doing an excellent job wearing their masks and washing their hands consistently throughout the day.

Their extra long summer and distance learning made them realize just how much they actually want to be in school and are committed to doing what it takes to make sure they can keep going, O’Mera said.

“They’ve taken to the masks very well, but it is hard not to see their smiles and some of them speak so softly it can be hard to hear them,” O’Mera said.

And while teachers at the elementary level also spray their students’ desks, other steps are also taken to keep the little ones safe, O’Mera said.

For example, the custodial staff goes out to the playground in between every recess to sanitize the play structures. The school librarian limits the number of children in the library and she doesn’t allow the students to browse anymore. Instead, she puts out a select number of books for the children to choose from or she retrieves specific books for them.

Lafe Nelson music teacher Belinda Britt has placed numbers on the floor in her classroom to promote social distancing and she requires the students to clean their hands before and after handling any instruments. After each class, she sprays the instruments and where they’ve been sitting.

She’s heard of several school districts that are no longer playing instruments or singing, Britt said. She expressed gratitude to all of the Facebook groups out there that are made up of teachers who share their ideas on how to overcome any obstacles.

The district’s school bus drivers are also doing their part, Nelson said. In between each route they clean and sanitize in and around all of the seats. All told, each bus is sanitized at least four times a day.

They’ve also made sure to keep the air conditioner off and the windows open to ensure fresh air is circulating, Nelson said.

Everyone now has their routines down pat, Nelson said.

“When we first started out it was stressful because of all of the unknowns and the ever-changing guidelines, but with the staff that I have and the administration that I have all pulling together as a team, it’s taken a lot of the stress out,” Nelson said.

O’Mera, too, mentioned how stressful everything was in the beginning.

“But, we found out it really isn’t impossible. It just takes a lot of great minds and effort,” O’Mera said.

“Phillip and Stuart are honestly the heartbeat of the district, both of them have been so amazingly positive. Not everybody would be able to do what they have done. I’m so grateful for their positivity,” Leitzke said. “They remind us it takes us working together to make all of this possible for our kids.”