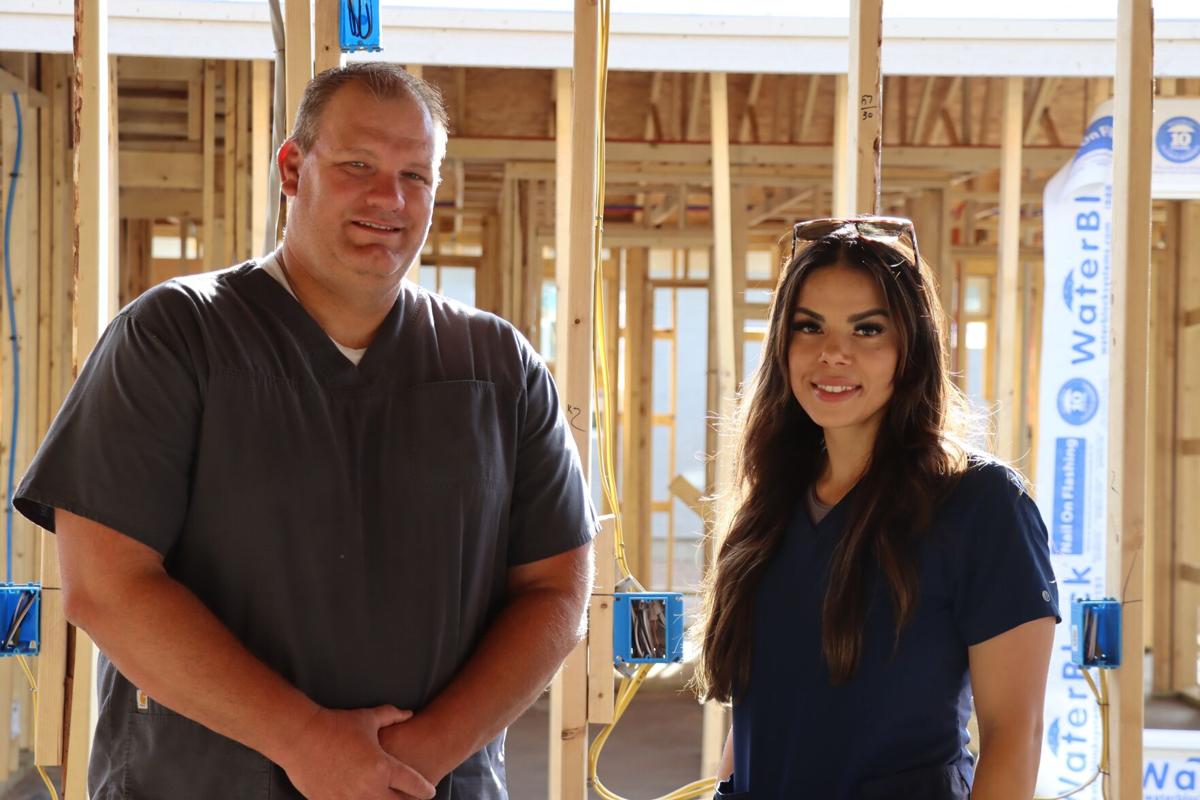 Scott Mulleneaux and Valerie Hernandez inside of the homes being built for their Essential Patient Care assisted living home in Safford. 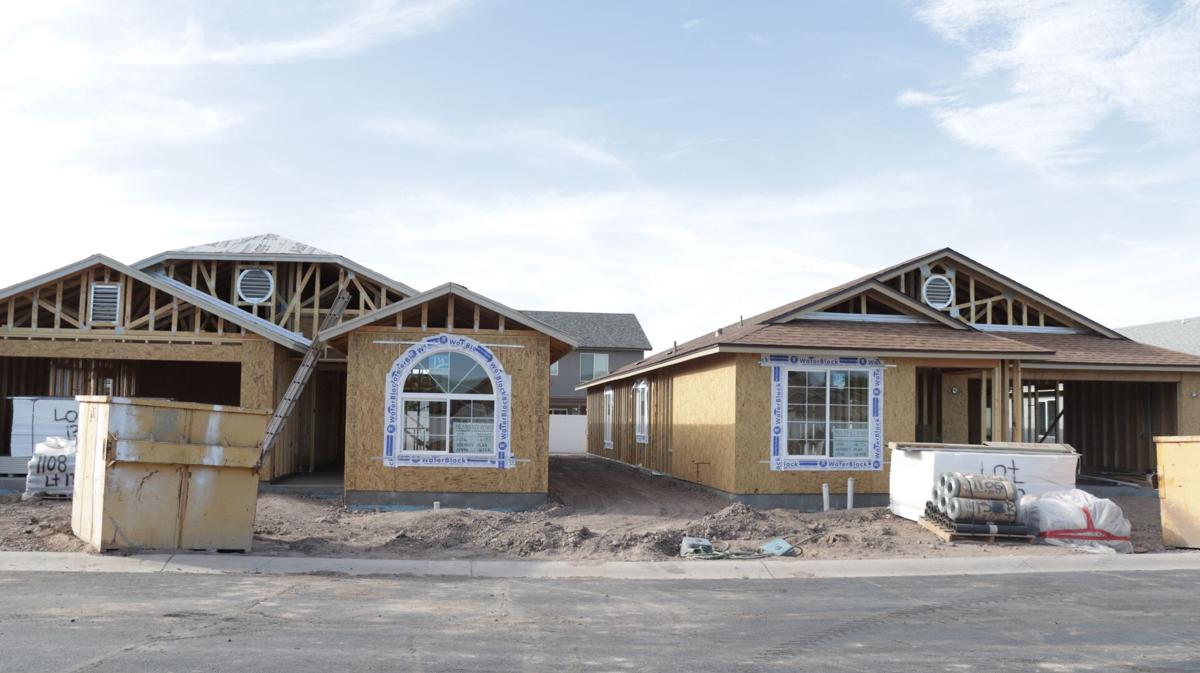 The two homes being built for the Essential Patient Care assisted living home in Safford.

Bill Mulleneaux lived a life full of accomplishments. From decades as a highway patrol officer in the Department of Public Safety to his time as a member of the Thatcher Town Council.

“He dedicated his life to this community down here,” said his son Scott Mulleneaux. “I’m very proud of him.”

As Bill grew older, he developed Alzheimer’s and started to need more help doing everyday things. Scott said he and his family tried to take care of those needs, but eventually they needed help and looked for an assisted living facility.

“He needed more care than my family could give. We looked everywhere, and we didn’t want to take him all the way to Tucson,” Scott said, “I couldn’t get my dad into any facility down here. There’s a desperate need down here.”

According to the last census, 14% of Graham County’s residents, or about 5,437 people, are over the age of 65. In Greenlee County, it’s 13.7%, or 1,301. Between the two counties, there is one nursing home, Haven Health Safford, and one assisted living facility, BeeHive Homes of the Gila Valley, in Thatcher.

“That does seem strange to me,” said Miranda Lang, compliance surveyor for residential licensing at the Arizona Department of Health Services. “You would think that there was more need in the area, and a need for more facilities in the area.”

Dr. Fred Fox, medical director of the Greenlee County Health Department, said he couldn’t recall there ever being either a nursing home or assisted living facility in Greenlee County.

Fox has been working in Greenlee County since 2004, but he lives in Silver City, New Mexico. In Grant County, New Mexico, which includes Silver City, Fox said there is one nursing home, two assisted living facilities and one state-run longer-term care facility. Grant County has a population of 26,998, 28.6% of which are 65 or older.

Shi Martin is the Long Term Care Regional Ombudsman Coordinator for the Southeastern Arizona Governments Organization’s Area Agency on Aging, and he put it more bluntly.

“There’s not enough to meet the needs,” he said, especially for people who can’t pay out of pocket. “Those that need it usually have to leave Graham or Greenlee counties.”

Scott and his family considered going to Tucson, but he said that even facilities in Tucson were full, so they tried to get his father into BeeHive in Thatcher. It, too, was full so Bill was placed on a wait list behind nine other people.

BeeHive has 15 rooms for 15 residents. In early June, that wait list was 17 people, with some waiting from six months to a year to get in.

Scott said he and his family got on the wait list in February or March of 2020, but by July, Bill still hadn’t received a room and they were getting desperate.

Fawn Kilpatrick, manager of BeeHive Homes of the Gila Valley, said that a six-month to one-year wait is common.

“I don’t like those phone calls, they make me feel really bad. Some people move on or pass away,” before they get to the top of the wait list, she said.

Haven Health Safford, the only nursing home in Graham and Greenlee counties, can serve 106 people, Executive Director J.D. Sitchler said. It has about 50 rooms, some private and some shared.

“We are able to handle the patient load now,” Sitchler said, adding that he thinks a lot of senior citizens are now getting cared for at home, either from hired caregivers or family members, especially since the COVID-19 pandemic hit the county last year.

“What happens in rural counties is families take care of the elderly or families have to take their family members outside of the county,” Fox said.

Scott and his family decided to hire private caregivers to take care of Bill at home.

“It’s a whole other world with the elderly here. It’s not a glamorous world, so I don’t think people talk about it much,” said Valerie Hernandez, one of the private caregivers who cared for Bill. “It’s kind of uncomfortable for people to talk about.”

Hernandez, who is a licensed caregiver, a patient care tech and is now finishing training to become a medical assistant, has had her own experiences with family in need of senior care facilities in the area. She cared for her grandfather at home for about a year.

Hernandez said her family considered taking her grandfather to a facility in Graham County, but his insurance and Social Security wouldn’t cover the costs, so Hernandez moved in with her mom and her grandfather.

BeeHive does not accept Arizona Long Term Care System, Arizona’s Medicaid health insurance for seniors, meaning the charge for people’s rooms, which run $4,000 to $4,800 a month, comes out of people’s pockets.

At Haven Health, Medicare will usually cover the first 20 days of care for short term patients at the facility, after which a co-pay usually starts, Sitchler said. Patients needing longer term care can use ALTCS.

“It’s quite a process to apply for ALTCS,” Sitchler said, adding that it can take 30 to 45 days to actually get the insurance after someone applies, and that’s if a patient, or their family, even know that ALTCS exists. Sitchler said that he’s hoping to start a workshop soon to teach people about ALTCS, who’s eligible for it and how to apply for it.

“It’s quite a process to apply for ALTCS,” Sitchler said, adding that it can take 30 to 45 days to get the insurance after someone applies — and that’s if a patient or their family even know that ALTCS exists. Sitchler said that he’s hoping to start a workshop soon to teach people about ALTCS, who’s eligible for it and how to apply for it.

Hernandez said she was glad to care for her grandfather, but it’s difficult to be a caregiver and a family member, but sometimes it’s what families are forced to do because of finances or other responsibilities.

“Before that, I was blind to it as well. When I actually worked with the elderly, I saw that it was a need,” Hernandez said, “We’ve all kind of had a blanket over us. I don’t know why. Maybe it’s ignored.”

Rather than just a matter of the economics of running a care facility, Fox said another factor in the lack of senior care facilities in significant parts of the country is also a matter of a lack of political will to see more be built and maintained.

“In order for something to be done, it’s going to need political will, and the only way that’s going to happen is if people communicate their needs about it,” he said.

In April 2020, Hernandez’s grandfather passed away. Bill Mulleneaux passed away in December.

They project it will be completed in July, and will house 16 people in two neighboring houses in Copper Canyon. Before that, they’re hoping to start a temporary assisted living home in a rented home in Central. They hope the home will be ready by next month, pending the approval of their application to run an assisted living home with the Arizona Department of Health Services.

“There’s a need in the community, and we can’t wait until December,” Hernandez said.

Four people have already signed up to move into the home in Central, which Mulleneaux described as a house with four large rooms that can fit two people per room, or one person in a private room.

Mulleneaux said they can house four more people in the temporary home, and that he and Hernandez are working with BeeHive so that they can refer people on their waiting list to them.

Hernandez said that their assisted living home would not take ALTCS or other Medicaid insurance initially, although she said they wouldn’t rule out trying to work with ALTCS patients in the future. Instead, Hernandez projected that rooms at Essential Patient Care would run from $3,500 to $5,000 a month.

“I want the homes to be like homes away from home,” Hernandez said, “A lot of elderly people think that they’re a burden at that age. When they’re around others of their age group, they do a little better. That’s my vision. For people to feel like it’s comfortable and their home.”