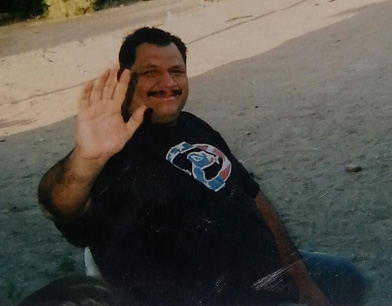 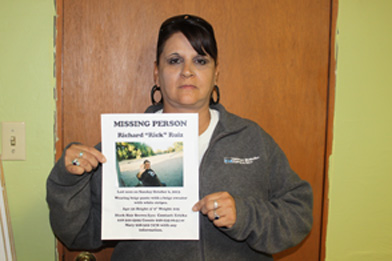 Connie Ruiz holds up a flyer announcing her brother, Richard Ruiz, as missing since Oct. 6. He was found deceased in the Gila River near the Thatcher Diversion Dam by two fishermen Oct. 24.

Connie Ruiz holds up a flyer announcing her brother, Richard Ruiz, as missing since Oct. 6. He was found deceased in the Gila River near the Thatcher Diversion Dam by two fishermen Oct. 24.

GRAHAM COUNTY — A body found early Thursday evening near the Thatcher Diversion Dam was identified as likely being Richard “Rick” Ruiz, 51, who had been missing since Oct. 6.

Graham County Undersheriff Jeff McCormies said there were no obvious signs of foul play, but investigation is ongoing and hopefully a cause of death can be determined after an autopsy is performed by the Pima County Medical Examiner’s Office in Tucson. McCormies said he expects the report to likely be completed by Wednesday.

“We don’t know until the autopsy is done,” McCormies said. “We need to see what the medical examiner is going to do.”

Friends and relatives of Ruiz had searched in vain since he walked away from his residence south of Safford near the Graham County Fairgrounds sometime between 10:30 p.m. Oct. 5 and 5:30 a.m. Oct. 6.

After numerous false tips, the Sheriff’s Office received a call from two fishermen at about 4:54 p.m., Thursday, who said they found a body in the Gila River near the Thatcher Diversion Dam. The dam is located roughly a half-mile northeast from the northern end of First Avenue in Thatcher.

The men said they were fishing with their children when they discovered what they thought was a large animal in the river. Upon closer inspection, they realized it to be human and immediately alerted authorities, according to a press release from the Sheriff’s Office.

After removing the body from the river, Ruiz was preliminary identified through a tattoo of the Pittsburgh Steelers emblem on his right forearm. He is expected to be positively identified after his autopsy is complete. McCormies said the condition of Ruiz’s body made it apparent that he had been in the river for more than a day.

The Sheriff’s Office is asking anyone with information or who had seen Ruiz between Oct. 6 and Oct. 24 to contact them at 428-3141.