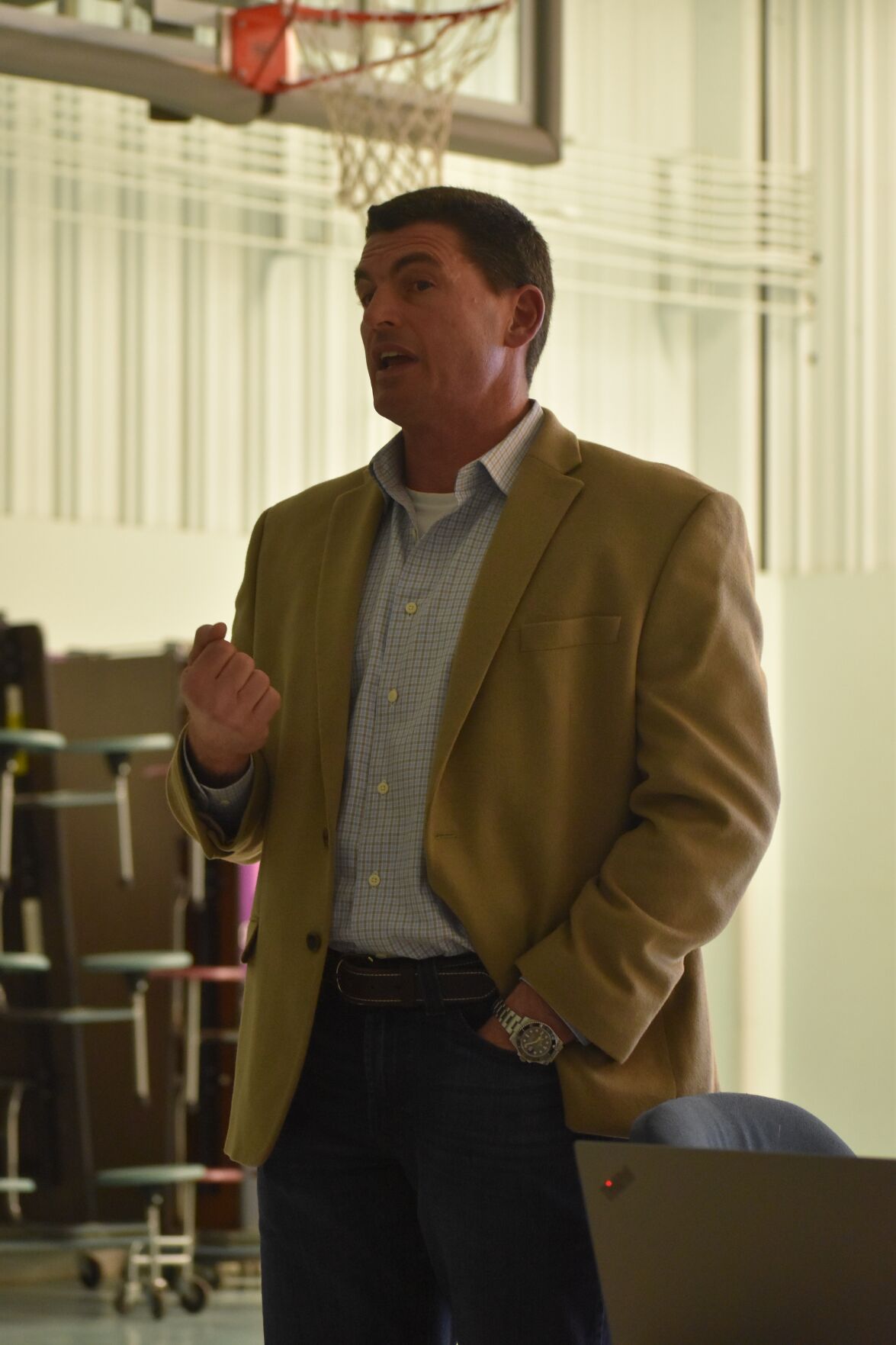 NatureSweet Executive Chairman Bryant Ambelang addresses a crowd of more than 30 Bonita residents about the future of his company should a sale to a marijuana producer fall through. 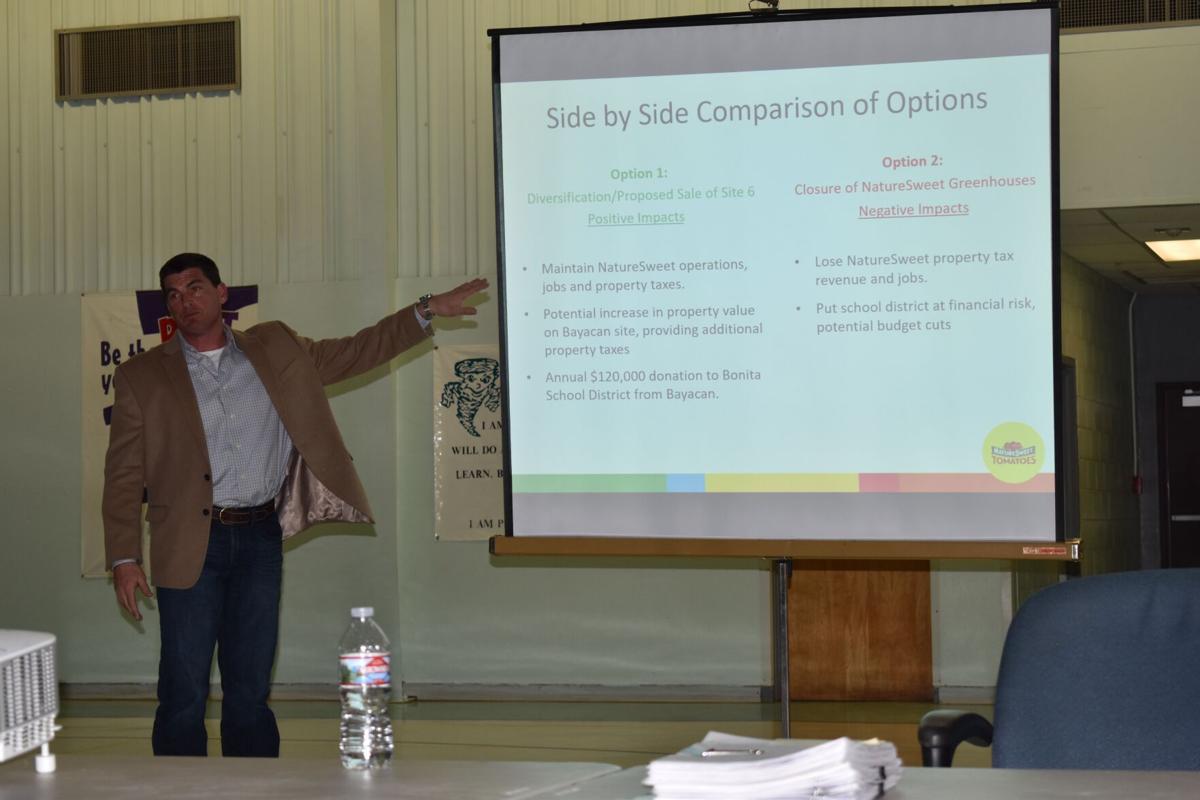 If Bayacan is ultimately be able to produce marijuana in Bonita, the company has promised to donate $120,000 annual to the Bonita Elementary School annually.

NatureSweet Executive Chairman Bryant Ambelang addresses a crowd of more than 30 Bonita residents about the future of his company should a sale to a marijuana producer fall through.

If Bayacan is ultimately be able to produce marijuana in Bonita, the company has promised to donate $120,000 annual to the Bonita Elementary School annually.

The Bonita School District could lose 73% of its local property tax revenue if NatureSweet isn’t able to sell one of its six greenhouse sites to Bayacan Company to grow medicinal marijuana, the company announced last week.

NatureSweet Executive Chairman Bryant Ambelang said unless he’s able to sell one or more of the company’s greenhouse sites he will have no choice but to close his Bonita operation. That closure would mean a loss of $650,000 in local property tax revenue for the K-8 school and the state’s equalization fund would only back fill about $185,000 of that shortfall, he said.

The school district’s property tax rate can’t be increased to make up the shortfall and a budget override wouldn’t help much either, even in the unlikely event one could actually pass, Ambelang said.

Ambelang held a public meeting inside the Bonita Elementary School gym Thursday night in the hopes of changing minds about a deal he has struck with Bayacan. He told the crowd that he wants to sell one of his six adjacent sites in Bonita to Bayacan, turn two sites into a research and development area and continue to grow crops on the remaining two sites.

Anticipating the deal with NatureSweet would go through, Bayacan filed an application with Graham County late last year asking for a zoning change that would allow it to grow medicinal marijuana in Bonita. After a large group of Bonita residents objected, the company pulled its application.

On Thursday, Ambelang said he wanted to make sure the residents of Bonita had all of the facts. More than 30 residents packed the bleachers in the school’s gym. Graham County Supervisors Paul David, Danny Smith and John Howard also attended.

Ambelang said he realized a year ago that in order for NatureSweet to make it in Bonita, he is going to have to diversify, but he has no interest in cultivating marijuana. He thought he’d sell 40 acres to Bayacan and use that money to create an R&D site and add cucumbers and peppers to his crops, both in Bonita.

He wrongly assumed that because recreational marijuana was legalized in Arizona in November his deal with Bayacan wouldn’t pose problems with residents, he said. Ambelang apologized for making assumptions and for not explaining his plans earlier.

“Y’all should have heard from me probably nine months ago,” the San Antonio resident said.

Ambelang explained he bought greenhouses in Bonita and Snowflake for $30 million in 2013, after Eurofresh went into bankruptcy. Graham County later assessed the property at $99 million and he appealed that decision and ended up striking a deal with the county in 2017, Ambelang said. Although this created some hard feelings and misunderstandings, he assured the crowd that had they been in that decision, they, too, would have appealed.

Ambelang said he has spent millions trying to make it a going concern, even using money from the sale of his Snowflake operation to a marijuana manufacturer. In FY2017, for every $1 he put into the company, he lost 75 cents, but by FY19 he was only losing 9 cents on the dollar. However, in FY20 he was back to losing 38 cents on the dollar and this year he’s projecting he’ll lose 25 cents on the dollar, he said.

There are 16 greenhouses to every site and six sites is just too many because of plant diseases, he said. If he’s able to sell to Bayacan, Ambelang promised he’d be able to create the best R&D facility in North America, if not the world.

If the deal with Bayacan goes through, Ambelang said the company will hire about 600 people. Right now, he has 150 employees, down from the 800 he employed originally.

If Bayacan is ultimately be able to produce marijuana in Bonita and begins making a profit, the company has promised to donate $120,000 annually to the Bonita Elementary School, Ambelang added.

Ambelang stressed to the crowd that there would not be any manufacturing done on the premises and scrubbers would be installed as part of the agreement with Bayacan to deal with any odors. He also promised to address any traffic issues that might arise. He’d make sure there were deed restrictions included in the deal so he could have a way to hold Bayacan to its word, he said.

His promises were met with disbelief by many in the crowd.

“To be honest, I can’t tell if there’s a moral objection to this. But if it’s really smell and if it’s really traffic, there are solutions to those. But at the end of the day if it’s ‘You’re not listening to the words coming out of our mouths. We don’t want it,’ then I got it,” Ambelang said.

Ambelang said he would not go back to the Graham County Board of Supervisors without the buy-in of the community.

Residents in the crowd questioned why he can’t just sell the site to somebody else, but he insisted no one else wants to buy it. Others said he should just go ahead and walk away from the property. One even said the school district probably needs to cut its budget anyway or stop educating children from Willcox.

One resident told Ambelang the area already has two marijuana-growing operations and doesn’t need a third. The man suggested Ambelang would be the only one to profit from the sale and said he did nothing with the proceeds of his Snowflake sale to help his Bonita operation. Another questioned the why someone would keep sinking money into the Bonita operation year after year.

Ambelang countered that the Snowflake proceeds kept the Bonita operation afloat for six years and provided $1.1 million in tax proceeds.

“You have a choice. Are you going to make up the $1.1 million that I’m paying? It’s real easy. Look, I’ll take all of the bullets for screwing this thing up. That’s OK. Who’s going to write the $1.1 million check that I’m writing? Plus the checks I’ve already written...You’re right, all of that money I sold for Snowflake is all in that plant. Stupid me, OK?”

He went on, “The part that was important to show was, ‘Here are the ramifications.’ And I 100% respect that this is your community. But I just wanted to present to you the outcome of this. To this gentleman’s point, ‘You paid too much. You put too much money into this. You sold the other one and plowed all of this money back into this one, are you going to keep spending money?’ That’s the plan.”

He needs an R&D facility and he’s going to put it somewhere, why not Bonita? Ambelang said.

Rancher Fred Borcherdt said he was sorry so many mistakes have been made with the greenhouse, but “I don’t think it’s our responsibility to cover for you.”

Ambelang didn’t respond, but asked if there were any other questions he could answer.

At that point, Roger Warner called out, “Any other bullets you can dodge?”

“I would love to stay here and, sir, I’ll be honest with you, no one has to cover for me. I’m going to be just fine. I’m talking about this community and I’m not threatening you with anything. I’ve shown how much I’m willing to invest in this community. I think I’ve proved that. So, with all due respect, I don’t feel like I have to dodge any bullets,” Ambelang said. “I was the only person in the world willing to make a bid on that property and I’m certainly the only person in the world ready to put that much money into it. So I’m coming to you now. I’m going, ‘Here’s an option,’ and if y’all are like, ‘Hey, look, who we are as a community we’re not up for that.’ That’s 100% within your choice and your decision.”

Two residents spoke in favor of the Bayacan deal. One was a mother worried about the school shutting down and having to send her child to Willcox. The other was Neal Brooks from Abby Lee Farms, who said residents were being short-sighted. Bonita residents have the advantage and could ask for a great deal to make the situation more palatable, he said.

“I’m not telling you to smoke it, drink it, eat Big Macs or have 48-ounce sodas. What I’m saying is be realistic because no one will buy this for four cents. It will sit there,” Brooks said. “If you’re going to pick your devil, if you think that’s what it is, and I don’t think that’s what it is, at least charge them what my dad called sin taxes because then you get a benefit.”