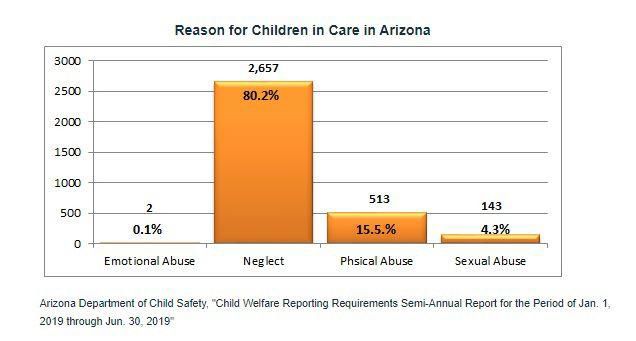 This graph is the age of children in the Arizona foster system from January to June 2019.

This graph is the age of children in the Arizona foster system from January to June 2019.

More children in Cochise County are entering the dependency system as police and hospital personnel step up to report unhealthy situations. Graham County reports a slight increase as well.

There are currently 23 children in the foster system in the areas of Willcox, Bowie and San Simone. These children are assigned CASA volunteers to assist them as they go through the court system. According to Abby Dodge, the program manager for CASA for Cochise County, these numbers are significant considering how small the population is in these areas.

A CASA is a Court Appointed Special Advocate. CASA volunteers are sworn officers of the court and advocate for children living in foster care. The volunteers write reports for court hearings, ensure the child and the child’s family are receiving all available resources, and spend hours with the children.

Currently, there are three CASA volunteers in the Willcox area. Because of COVID-19 many of the interviews between CASA volunteers and their assigned children are done online. Limiting personal contact is key for CASA volunteers unless a child is in crisis during the pandemic.

“The problem that we face in that area, for the most part, is that we don’t have any foster homes in Willcox,” said Dodge.

Right now, children in the foster care system stay with relatives. Dodge was grateful there are family members who are able to take in children, but some children require more assistance from someone with additional training. Whenever a child is placed into foster care and doesn’t have family in the Willcox area, the child has to be relocated to another area.

Dodge said most children are placed in foster care because their parents have substance abuse issues.

“I know since this pandemic started we’ve seen an uptick of cases come in,” said Dodge.

Within the last two weeks, 10 children were entered into the Cochise County foster system, she said. These cases were reported either by hospital staff or police. Dodge said there are usually between 65 and 85 cases in a calendar year, thus making eight children in two weeks a steep incline.

“I do encourage anybody that suspects that a family is struggling, to try to be supportive in any way that you can. And if you’re worried that there might be any abuse or neglect going on to please report it to the child abuse hotline,” Dodge said.

After reporting an incident or situation, professionals will do an assessment and determine if there is abuse or neglect going on within the home. However, Dodge said if there is a way to keep a child in the home and offer the family support, the Department of Child Safety will do so.

“I don’t want anybody to be afraid they’re ruining a family. Ultimately, we’re hoping it’s going to make them stronger in the long run,” Dodge said. “The CASAs are able to provide the judge with a much more rounded picture of what the child needs and wants. They’re focused on the best interest of the child.”

Dodge explained that in the ever-changing world of a foster child, a CASA is a person who is a stability. A CASA can take a child to the park, theater, and is also to attend every court hearing involving the child to assist in representing the child’s best interests.

For children in the Willcox area, they will not be receiving the assistance of a CASA due to the lack of volunteers.

Dodge said the number one reason why she can’t find volunteers for the CASA program in Cochise County is because it is difficult to communicate with would-be volunteers in rural areas. The people in rural areas don’t know about CASA, or how they can become one because communication is so difficult. The other main reason why people are hesitant to volunteer is because the courts are in Sierra Vista, and when each child attends court, the CASA will need to attend. This travel time to visit court dates can take up entire days, and Dodge said she is not surprised would-be volunteers are discouraged by it.

“I tried to set up a Coffee with CASA once, but finding a place to set one up is even difficult,” said Dodge, regarding CASA recruitment in the Willcox area.

She has considered setting up a CASA booth at a local event in the Willcox area. However, she can’t find any events she believes which would work since they entertain out-of-county visitors, such as the bi-annual wine festival.

Although calls are up in the Cochise County area, that’s not the case statewide.

“Keeping children safe is the responsibility of every Arizonan,” said DaRonco. “DCS cannot investigate child abuse and neglect unless we receive a report from the community.”

Claire Louge, executive director of Prevent Child Abuse Arizona, said she is concerned about the pandemic’s influence on families and the loss of social connections. When stressors of daily lives go up, the chances of child abuse and neglect do as well.

Louge said communities need to support families who are struggling.

Also, Louge said during the pandemic parents should reassure their children that they are going to keep them safe.

In April the Graham County Courthouse was lit with blue light bulbs in honor of Child Abuse Prevention month. Unlike Cochise County, the CASA organization is sparse in Graham County, with only two volunteers in the entire county.

Brandy Lee is the chief CASA director for the county, and said locals know very little about the program and believes that is why there are so few volunteers.

Lee said CASA volunteers act as a communication between the child and judge.

She later added if anyone wants to volunteer to be a CASA, they must do some local training and then drive to Maricopa County or Pima County for continued training.

“The CASA program really is the voice of the child in the foster care system,” said Lee. “Parents get attorneys and children are scared a lot of the time to attend court. The CASA can let the judge know what they’re(the children) are feeling, and they are the eyes and ears of the court.”

Unfortunately, Lee said most would-be volunteers consider doing the two and a half days worth of training in Tucson or Phoenix a hardship. She attributes the travel time out of the county as one of the factors of low volunteer participation. Also, many people don’t know about the existence of CASA, and she found it difficult to educate others about it in local rural setting.

Like Cochise County, the reason why most children end up in the foster care system in Graham County is due to drug use in the home.

Currently the foundation attempts to assist the families with household supplies, food, diapers, and checks on the family’s mental status. Because of COVID-19 Maltos is doing virtual visits with families enrolled in the foundation.

“I’m extremely worried because this is the time frame where abuse will occur. You have people shut into their homes, stress factors taking place financially with food, parents trying to work from home and be the teacher,” said Maltos. “Now we’re looking at layoffs. Not only did we have issues with income in the beginning, because 85 to 90 percent of our families are low incomes, what happens then?”

According to CASA of Arizona, the number one reason why children end up in the Arizona foster care system from January 2019 to June 2019 is neglect. Physical abuse is the second reason. Most children in the system are 1-5-years-old.

Bill Noland, who lives near Willcox, has been a CASA for almost five years. After teaching college English, computer science, photography and film studies, he has settled on volunteering as a CASA in his 70’s.

He said that to a foster child, the feeling a stability found in a CASA is important. In a foster child’s life, people come and go, disappearing on a regular basis. From foster parents to case workers, people cycle through a foster child’s life. CASA volunteers are supposed to be at every court date, and attend the child through the entire process.

“Sometimes you make a difference, and hopefully somebody will end up making a difference in every troubled kid’s life. We don’t always, some of them we lose into the system and they end up in prison. But it’s worthwhile to try, and every once in a while, we succeed,” said Noland.