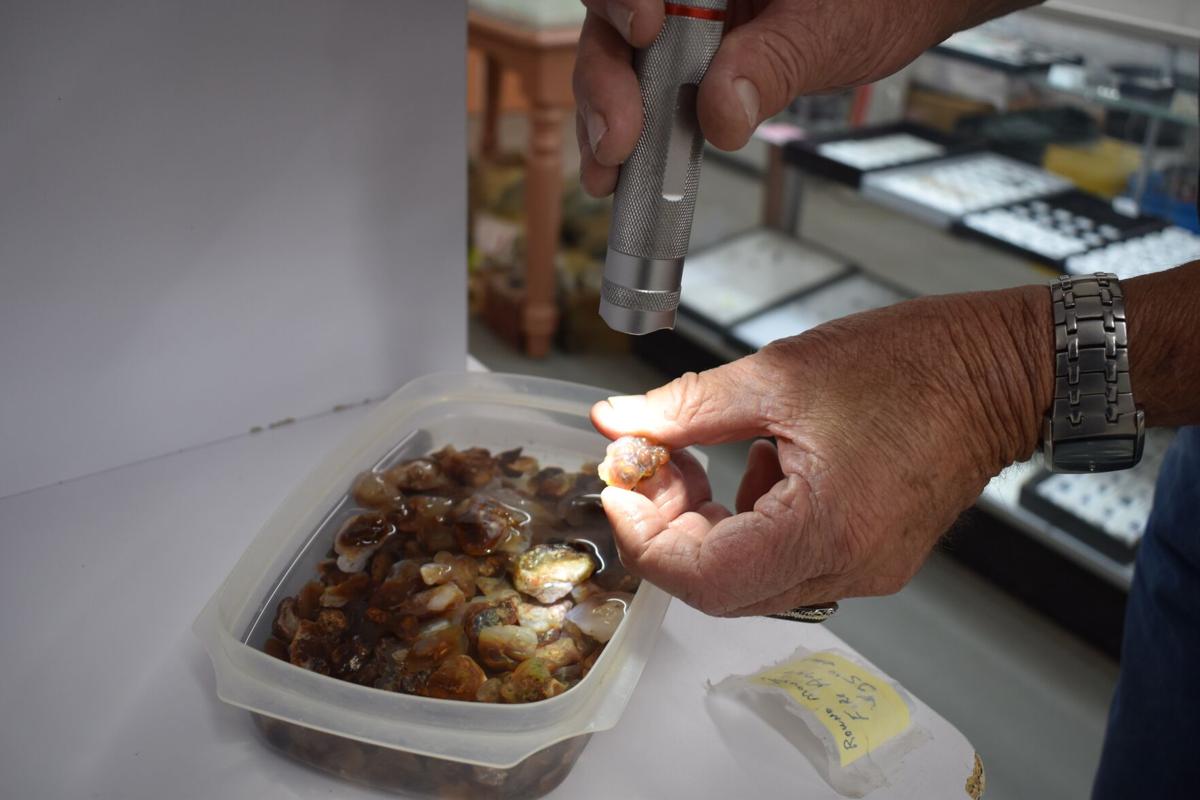 Doug Barlow, owner of Rock-A-Buy Rocks & Gifts in Barlow, shows off some fire agate, a favorite among rock hunters. 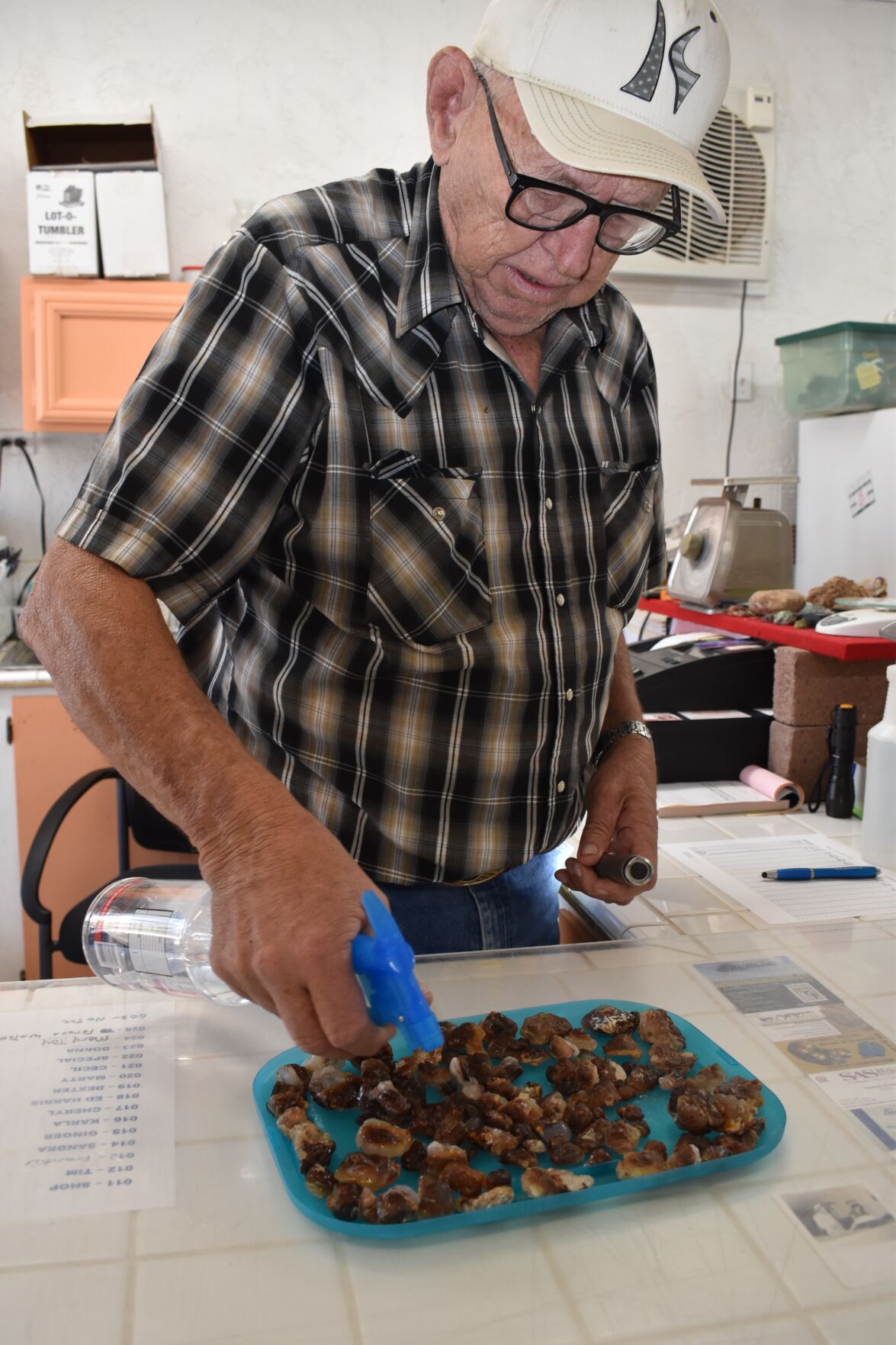 In order for the "fire" to come out in fire agate, Doug Barlow says you have to wet the stone. 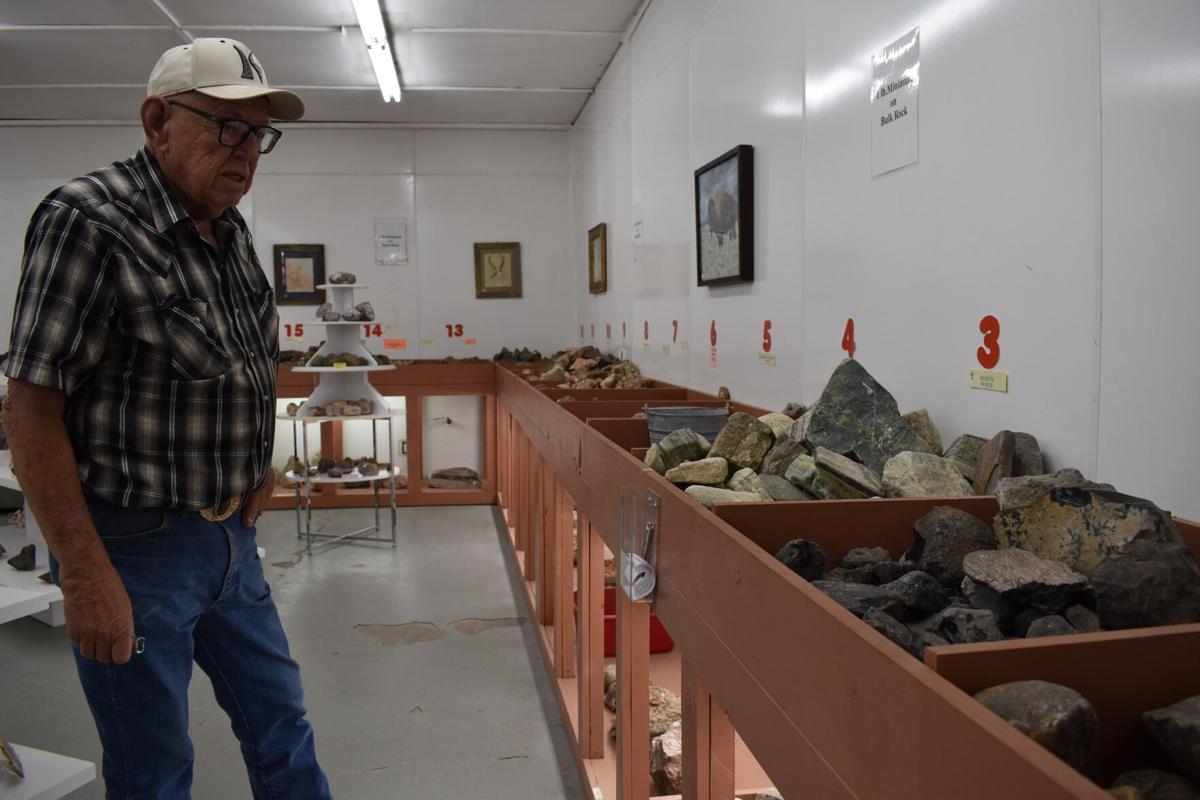 Doug Barlow said the bigger rocks are popular among those who like to whittle.

Doug Barlow, owner of Rock-A-Buy Rocks & Gifts in Barlow, shows off some fire agate, a favorite among rock hunters.

In order for the "fire" to come out in fire agate, Doug Barlow says you have to wet the stone.

Doug Barlow said the bigger rocks are popular among those who like to whittle.

At 77-years-old Duncan resident Doug Barlow has come to an inescapable conclusion. Retirement is not for him.

The first time Barlow tried to retire he was 53 and thought 32 years with El Paso Natural Gas was enough. It didn’t take long for him to get bored, though, and he went to work for Greenlee County running the fairgrounds. After eight years, he decided to try retirement again. It didn’t take.

He spent five or six years working at a convenience store and tried again.

Nowadays, Barlow spends his days running his own business, Rock A Buy Rocks & Gifts on Old West Highway in Duncan.

The vast majority of the store is taken up with displays of lapis lazuli, turquoise, malachite, azurite, petrified wood, chrysocolla, tanzanite and petrified dinosaur dung, just to name a few.

The front quarter of the store is filled with jewelry and handmade soap offered on consignment. Brightly colored crocheted scarves, hats and baby clothes are also on display — all made by Barlow himself.

When Barlow was seven, he came down with yellow jaundice and couldn’t go to school.

“I was driving my mother crazy so she taught me how to crochet and I’ve been crocheting off and on ever since,” Barlow said.

He got teased quite a bit, but he has always found it to be relaxing.

One might assume that since Barlow worked for El Paso Gas for so long and now owns a rock shop he must be a geologist, but they’d be wrong. He started out as a laborer and retired as a supervisor.

He started rock hunting with his brother as a kid, but he bought the shop in 2014 for his nephew originally. As it turns out, he grew to love it so much he figures he’ll die before he decides to retire again.

Still, he doesn’t consider himself an expert.

“I learn a new rock every day,” Barlow said.

The Rock A Buy draws people from all over the world, Barlow said. He’s had people visit from every state except Vermont and New Hampshire, Siberia, Switzerland, China, Canada and Australia.

He still gets tickled when he remembers the guy visiting from Russia who asked him what he knew about his country. Barlow recalls how indignant he got when Barlow told him he thought the only people in Siberia were those who got into some sort of trouble.

“Rock hounders are the most honest people in the world,” Barlow said. “I’ve had no trouble with pocket pickers and I’ll even accept checks from them. I’ve never received a bad check.”

Many of those who come visit his shop are on the hunt for fire agates, a semi-precious gemstone formed by relatively recent volcanic activity, Barlow said.

Many of them have been found on the Lazy B Ranch in Duncan, the ranch where U.S. Supreme Court Justice Sandra Day O’Connor grew up, he said.

In past years, Barlow used to take visitors to the ranch to hunt for them, but the ranch has changed hands, making it more difficult.

There are plenty of other places in the area to take people intent on finding hidden treasures and he’s always happy to, Barlow said. In fact, he goes hunting for himself whenever he gets the chance.

He knows all of the best places to look for specific rocks, the best route to get there and which properties to avoid.

“You can stumble on any rock you want out there,” he said.

Winter is his busy season, Barlow said. Snow birds will make a day-trip to Duncan and folks who visit the Tucson Gem and Mineral Show in February will often swing out of their way on their home home to visit his shop.

He doesn’t attend the Tucson show because he finds it too expensive. The items he sells he either collects himself, gets from other dealers he’s gotten to know over the years or from local people looking to buy or trade.

Although fire agates and amethysts are quite popular, Barlow said “everyone has their own private thoughts on what they like.”

“A lot of women have to have a rock speak to them before they’ll buy it,” Barlow said.

When people tell him they’re going hunting, Barlow gives them advice about carrying water and snacks, watching out for rattlesnakes and pack rat dens. He also warns them they may not have cell service.

The number one thing, however?

“I tell them, ‘I’ve got to warn you. It’s addictive. If you get one rock, you’re going to be hooked,’” Barlow said.