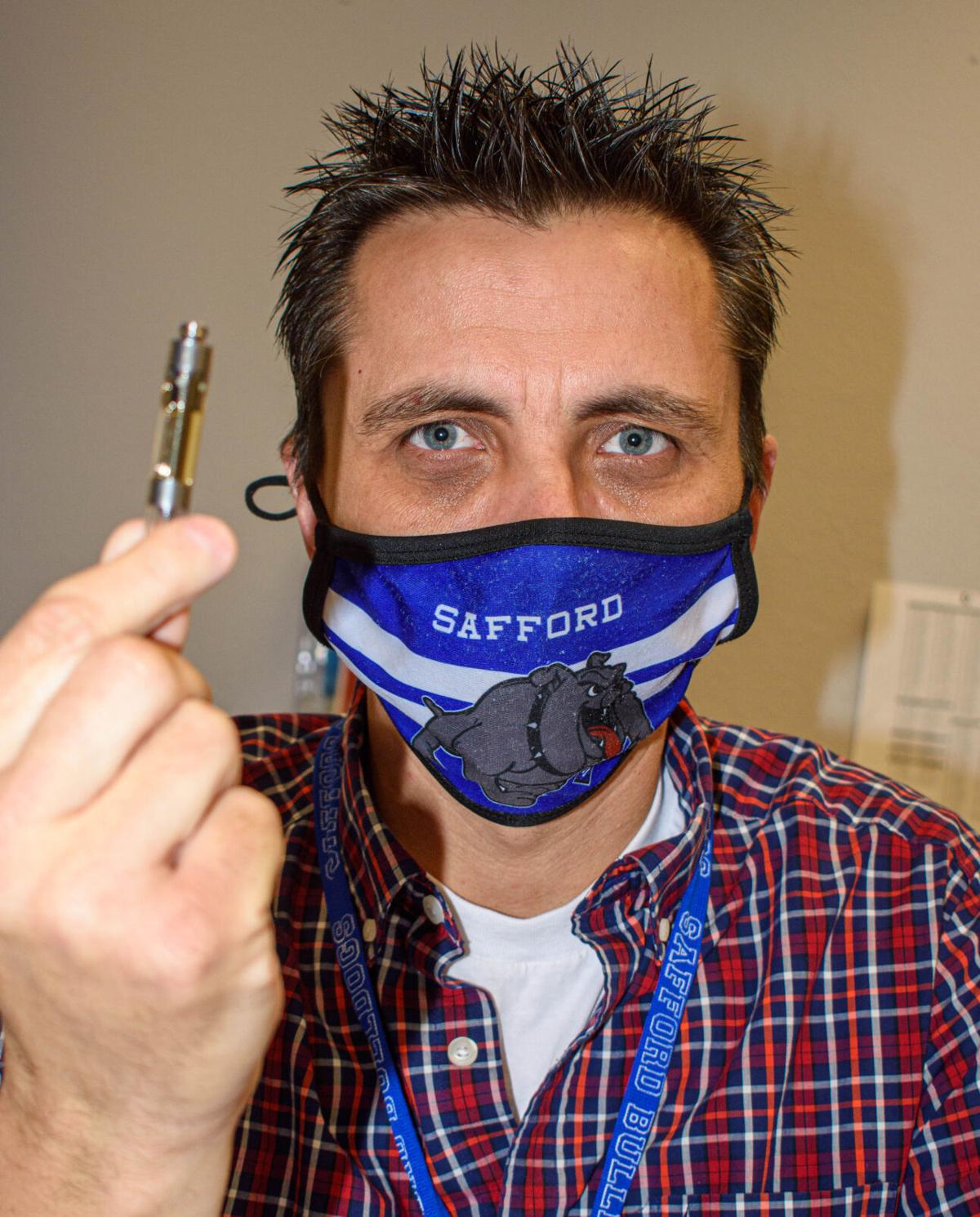 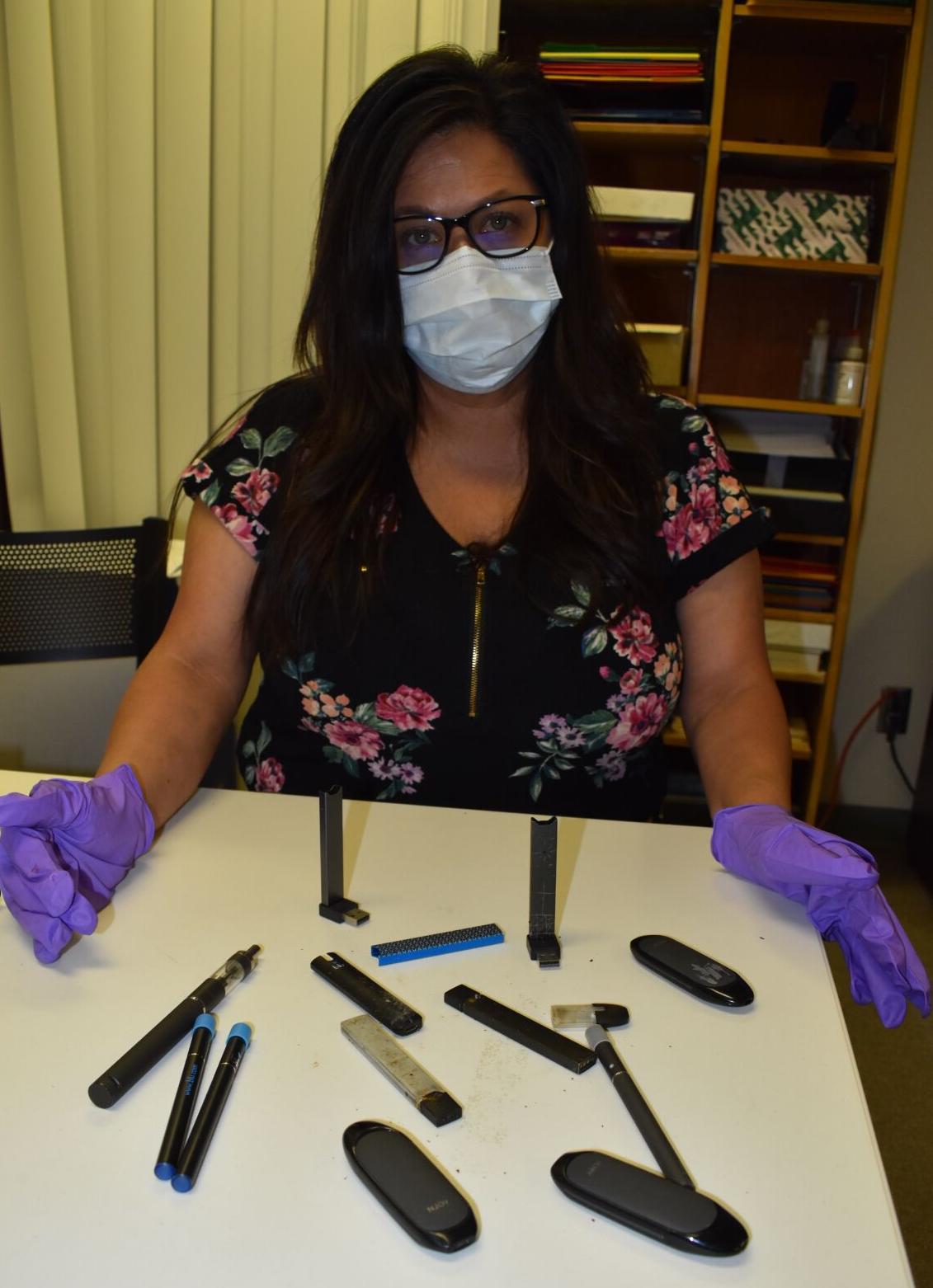 Toni Palomino, who oversees the tobacco cessation program for the Graham County Health Department, displays why it's sometimes hard for parents and teachers to recognize vaping devises. They sometimes look like pens and flash drives.

Toni Palomino, who oversees the tobacco cessation program for the Graham County Health Department, displays why it's sometimes hard for parents and teachers to recognize vaping devises. They sometimes look like pens and flash drives.

Health and school officials in Graham and Greenlee counties are concerned about the growing number of teenagers who vape and manufacturers who continue to target young people with messages that ignore the dangers.

It’s easy for teens to dismiss signs that they are addicted to nicotine, that vaping has long-term negative effects and easy to believe the myth that vaping is a healthy alternative to smoking cigarettes. Parents, likewise, are ignorant of the truth, they say, with some even condoning their children using the products.

Studies bear out the concerns. Researchers at Portland State University in Oregon said formaldehyde in the vapor of e-cigarettes can be drawn deeper into the lungs than the formaldehyde in cigarette smoke because their compounds bind to the particles in e-cigarette aerosols. Formaldehyde causes cancer.

Another study showed that, when heated, some of the flavoring agents transformed into propylene oxide, which is also a carcinogen. The Centers for Disease Control and Prevention has discovered that some e-cigarettes may contain as much nicotine as a pack of 20 regular cigarettes.

That’s alarming since the U.S. Department of Health and Human Services has found that nicotine exposure during the teen years can disrupt brain development and lead to long-lasting effects such as increased impulsivity and mood disorders.

As for vaping THC, studies have shown that THC oil can be up to four times as strong as the THC in marijuana, and Johns Hopkins Medicine researchers found in one study that vaping THC increased the rate of short-term anxiety, paranoia, memory loss and distraction.

Vaping uses an electronic device that consists of an atomizer, a power source such as a battery, and a container such as a cartridge or tank that is filled with juice that contains tobacco, liquid THC or cannabidiol oil. Instead of smoke, the user inhales vapor, thus the term vaping.

Students are routinely caught vaping on school grounds locally and it’s an issue across the nation.

According to one study, the number of teenagers vaping has doubled in the past three years.

The National Institute on Drug Abuse released a study in December by the University of Michigan’s Institute for Social Research in Ann Arbor. It showed that the percentage of eighth-graders who said they’d vaped nicotine in the past 12 months was 16.6%; 10th-graders, 30.7%; and seniors, 34.5%. In 2017, those numbers were 7.5%, 15.8% and 18.8%, respectively.

Graham County Health Department officials and administrators from all four Gila Valley high schools and Morenci High School said students are vaping for a variety of reasons. Some believe it’s fashionable and others are using it to relieve stress and boredom, especially during the pandemic. Regardless of the reasons, officials agree students have no idea the danger they are in.

All of them also agree that the companies selling the devices target underage students by creating difficult-to-detect delivery methods and pleasant flavors. The purchase of tobacco products, including vaping products, is illegal in Arizona for anybody under 18. In some jurisdictions, it’s 21.

“It’s a racket. It’s just another way for them to make dollars and they don’t care who they market or sell it to,” said Pima High School Principal Cody Barlow.

Nowadays, the devices can look like ink pens or computer flash drives and they don’t release clouds of smoke. Clothing lines have replaced hoodie drawstrings with tubing that attaches to a vaping device and a teenager may look like they are sucking on the end of the drawstring, but actually be vaping.

The juices often come in flavors, too, such as Piña Colada, strawberry, cotton candy and a multitude of other sweet treats.

It’s a whole new ballgame from when he was a teenager, said Safford High School Assistant Principal Tad Jacobson.

Because it was impossible to hide their usage, most kids would chew or smoke off campus, he said. Nowadays, kids can vape walking down the hallway or in the bathroom and teachers are none the wiser.

“If they’re vaping in bathroom and you walk in, it will smell like cotton candy. It will smell like a girl just spritzed cologne or someone has used Ax body spray. You won’t know (they’ve vaped) unless you see someone with it in their mouths. You don’t see giant clouds of smoke, either,” Jacobson said.

Jacobson and his counterparts through the Gila Valley also pointed out that vaping is a problem in every demographic. Straight-A students, athletes and students from “good” families are just as likely to vape as students who struggle in school, have families that are struggling financially or come from broken homes.

Toni Palomino, who oversees the tobacco cessation program for the Graham County Health Department, agreed and said that even if there is a tiny bit of vapor, it’s dispersed quickly.

“The teacher could be writing something on the board, and they could, you know, hit the pen and then turn around and it’s gone. Or they could blow it out in their backpacks or into their sweaters and the teachers can’t even smell it,” she said.

After going through several statewide trainings, Palomino has heard many stories.

“There are actually challenges that the students have,” Palomino said. “They have challenges to see how many times they can hit their vape pens in the classroom with the teacher right there and they record them and post them on YouTube.”

Palomino said that although it’s illegal for children to purchase tobacco products, it’s amazingly easy for them to get their hands on them.

If they can’t find a store that doesn’t check for ID or if they can’t pilfer from their parents or older siblings’ stash, they simply log into their parents’ Amazon accounts and put in their orders online, Palomino said.

If the parents see the purchases, the kids have a ready excuse, she said.

“I think parents are in denial sometimes. Plus I think the kids are just lying to parents, saying, ‘Well, it’s just a flavored water vape, Mom. It’s just all flavor. All the kids are doing it,’” Palomino said.

On the flip side, there are also parents who are OK with their kids vaping, Palomino said.

They also don’t realize that studies have shown tobacco is a gateway drug. It often leads to kids experimenting with marijuana and other drugs, she said.

When kids get caught with vaping devices on campus, they face discipline from the school and the criminal justice system. All students are referred to local law enforcement agencies, who then refer them to juvenile probation.

In Safford, Thatcher and Pima schools, students go through the ACCI Cognitive Lifeskills program, which offers online classes designed to help kids make better choices. Fort Thomas students are suspended for up to two weeks and Morenci High students are required to go to a Greenlee County Health Department for their first offense and face suspension for repeat infractions.

While they want to hold students accountable for their actions, Jacobson said the last thing SHS staff wants to do is to shame students. At SHS, he talks to the students about why they think they’ve found themselves in the situation they’re in, discuss ways they can fix it and the student comes up with an action plan.

After completing the online classes, Jacobson said he talks to the student about the things they’ve discovered. He then continues to check in on them for weeks afterward, sometimes pulling them out of class to go for walks around campus or chatting in the hallways.

The parents are involved all the way throughout the process, too, Jacobson said.

“I haven’t had one parent yet say they don’t want to be a part of these classes,” Jacobson said. “Most of them are like ‘Oh my gosh, I had no idea and how do we help?’ They’re concerned about their kid’s health.”

It is crucial for the students to know they are cared for, Jacobson said.

“We want to rally around the kids, we don’t want to abandon them,” he said.

Although he wasn’t a fan of school when he was a teenager, Jacobson said he always thought of school as fun. Today’s kids are under much more stress and thanks to COVID-19, they don’t get to blow off steam at basketball games, pep rallies or other gatherings.

Ryan Conrad, Thatcher High School principal, said he’s had teenagers come into his office and ask for help because they realize they’re addicted to vaping.

Because of COVID-19, the Graham County Health Department hasn’t been able to give presentations over the last year, but the department is finding other ways to educate. They frequently share information with school administrators via email and send over literature and posters, Palomino said.

The school administrators also said the topic is discussed in health classes and students are required to become familiar with their student handbooks.

Conrad said he’s reached out to the Graham County Substance Abuse Coalition and there’s been talk about starting up a support group for teens who are trying to quit vaping. He’s also looking for grant opportunities, he said.

Barlow, the principal at PHS, said he’s been surprised by what he’s learned from students who have been caught.

“More often than not they’ve already realized they’ve got an addiction problem and they’ve been trying to wean themselves off of it,” he said.

Education is key, Morenci’s Goodman said. They need to find some way to convince the kids that vaping is dangerous before they start.

“They get that tobacco is bad for their lungs, but they think that because vaping is smokeless, it’s OK,” Goodman said. “It’s hard to get the message across that it’s dangerous. They think they’re indestructible, that they’re immortal and unfortunately, if what you’re telling them doesn’t mesh with what they’re seeing, they ignore you.”

On the positive side, all of the administrators said more and more students are growing concerned about their classmates and are telling their teachers and administrators about those who vape.

Visit the following links if you'd like to know more.

How to quit vaping - https://teen.smokefree.gov/quit-vaping/how-to-quit-vaping