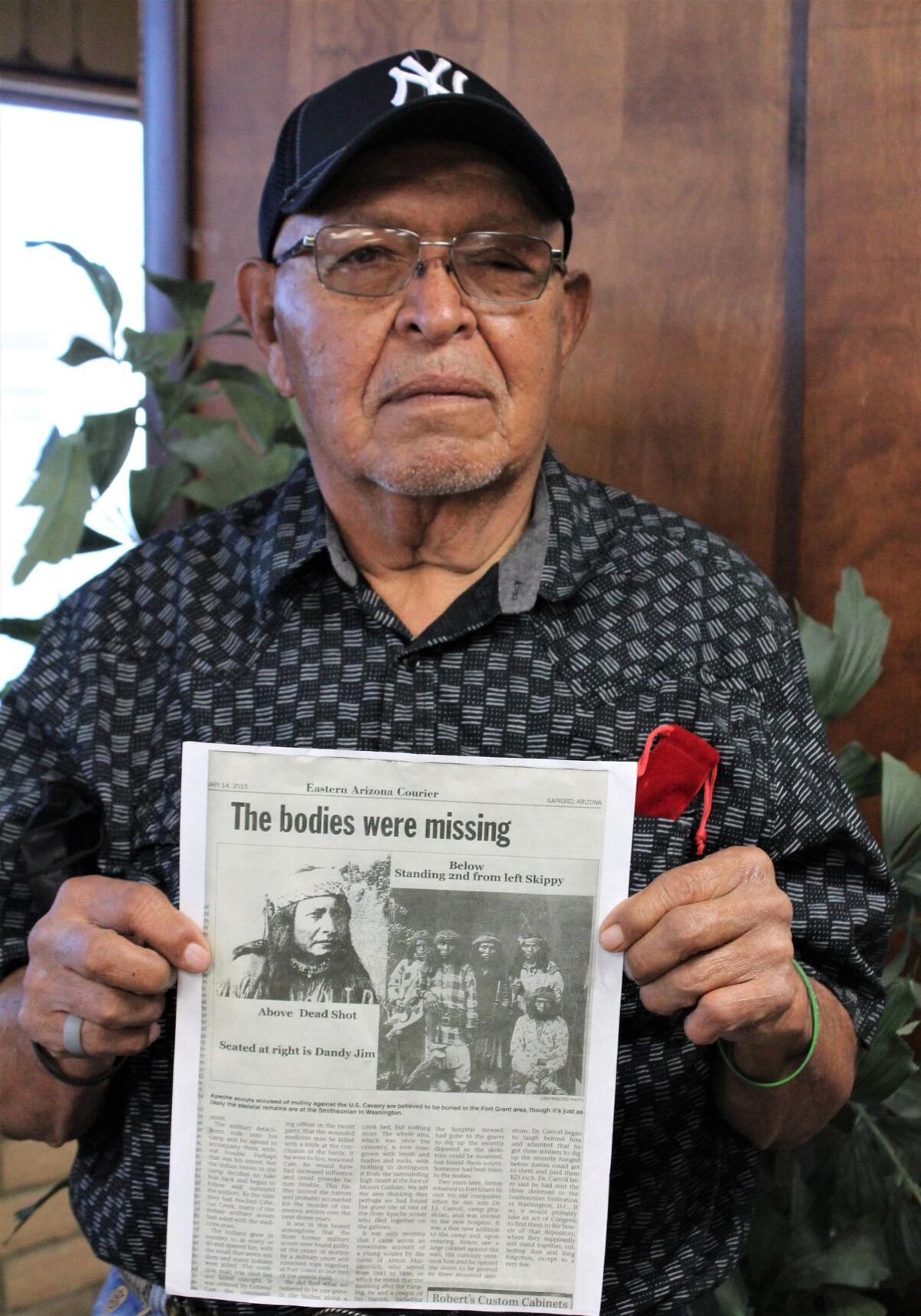 Ramon Riley, culture resource director for the Fort Apache Museum, has been searching for the stolen remains of three Apache scouts who were hung by the U.S. Army in 1882. 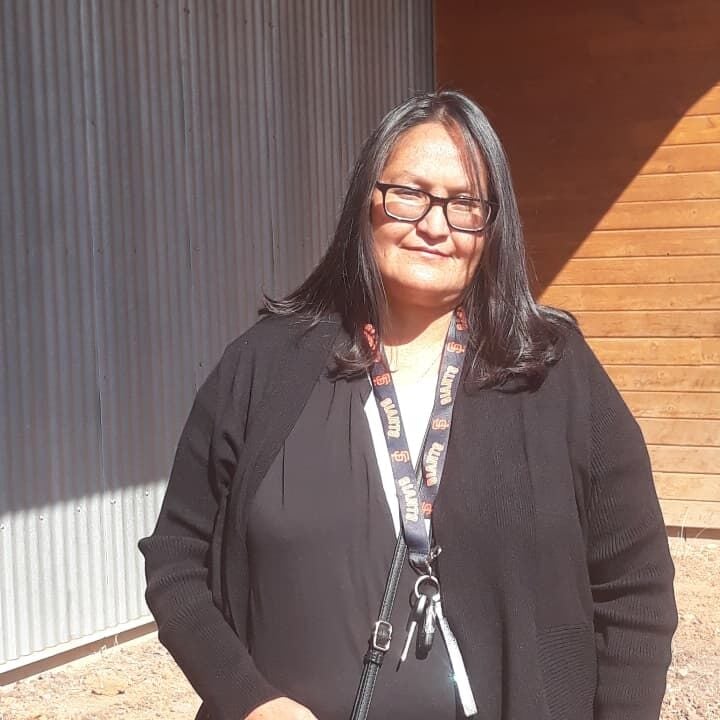 Nichole Cosen is the great granddaughter of Dandy Jim, an Apache scout whose body was stolen from the Fort Grant cemetery. 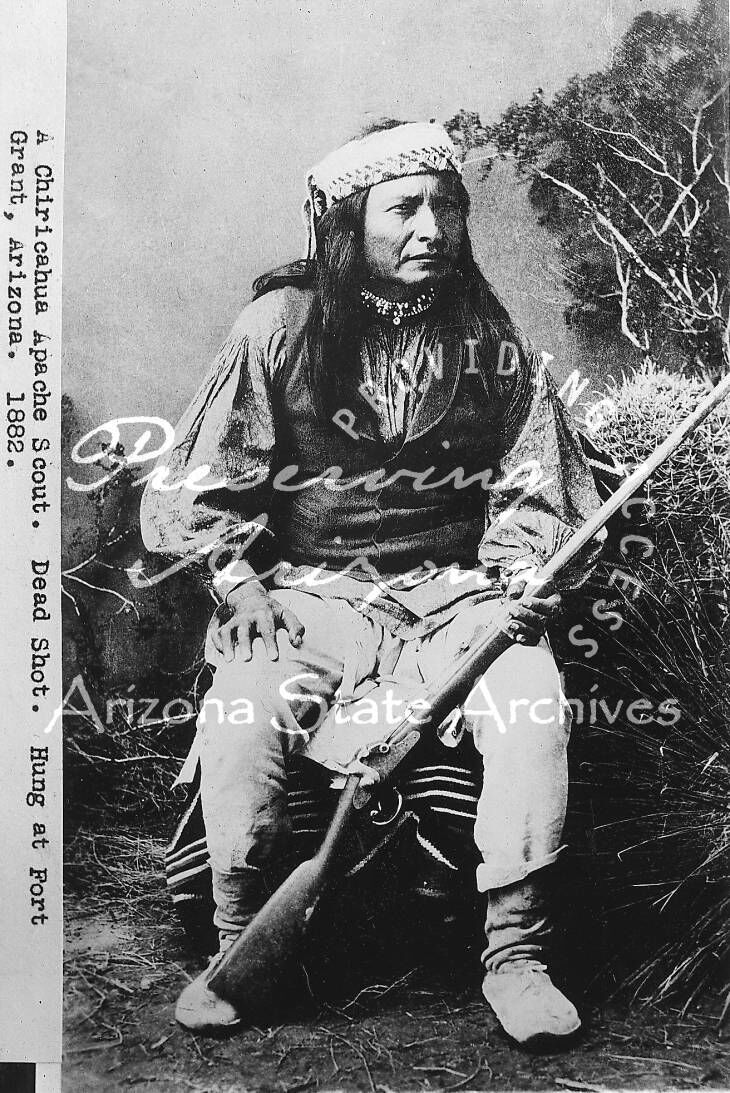 Dead Shot was one of the Apache scouts who was hung by the Army. Ramon Riley shares the same clan family as Dead Shot.

Ramon Riley, culture resource director for the Fort Apache Museum, has been searching for the stolen remains of three Apache scouts who were hung by the U.S. Army in 1882.

Nichole Cosen is the great granddaughter of Dandy Jim, an Apache scout whose body was stolen from the Fort Grant cemetery.

Dead Shot was one of the Apache scouts who was hung by the Army. Ramon Riley shares the same clan family as Dead Shot.

Ramon Riley is on a quest.

Before he retires, the 79-year-old Riley wants to find the stolen bodies of three Apache scouts who were hung in 1882 by the U.S. Army and then stolen from their own graves.

Riley is the Native American Graves Act representative for the White Mountain Apache Tribe and has traveled across the nation and the world searching for Apache artifacts and remains. He is also the culture resource director for the Nohwike’ Bágowa White Mountain Apache Cultural Center and Museum on the Fort Apache reservation.

His quest began when someone handed him part of a January 2015 Eastern Arizona Courier article about the missing scouts.

According to Riley, the scouts were victims in one of the darkest moments in Apache history.

American historians call the incident the Battle of Cibecue Creek. The Apache people call it the Cibecue Massacre.

In August 1881, the Army became fearful about the intentions of an Apache medicine man named Nock-ay-det-klinne, Riley said.

“The medicine man was doing a ceremony of healing to heal the people,” he said. “He was doing this healing ceremony. They said in one of the ceremonies, besides the healing, ‘We can get rid of the white people.’ They did that ceremony and a lot of people went to see what he was doing. The Army thought they were going on the warpath.”

The U.S. Army sent horsemen to order Nock-ay-det-klinne to return to Fort Apache several times. However, there were difficulties in translating English to Apache and the medicine man didn’t receive all of the messages, Riley said. He also couldn’t stop his healing ceremony to communicate with the messengers. Frustrated, the Army went to Nock-ay-det-klinne’s location, tied him up, and made him march back to Cibecue and their camp.

“The Apache people who knew the story, they said there was lots of yelling when they tied him,” he said. “At one moment, the medicine man tried to run away, and they shot him.”

As Nock-ay-det-klinne was crawling away, Colonel Eugene Asa Carr ordered him killed and an Army soldier did so with an ax, Riley said.

“That’s when the shooting started,” he said. “They chased the Army all the way back and they fought and fought.”

During the fight, 18 Apache warriors were killed, and eight U.S. Cavalry men were killed.

Later, the Army sent a detachment from Fort Thomas to round up the renegade Apache fighters. Three scouts who had been working for the Army — Dandy Jim, Dead Shot and Skitashe — surrendered in San Carlos and the Army sent them to Globe for trial. The scouts were then transferred to Fort Grant, where they were hung in March 1882.

“They stood up to the Army. To us, they are the brave people,” Riley said. “To us, the Army was an outsider. They took and took from us and they tried to take our culture. Everybody thought they were buried in Fort Grant. Nobody bothered to look until I did. They were stolen, the graves were robbed.”

According to the Eastern Arizona Courier article by the late columnist Danny Haralson, after the men were hung, their bodies were dug up and placed in a large cabinet in the hospital at Fort Grant, located on the slopes of Mount Graham. The research indicated the bodies were later shipped to the Smithsonian Institute in Washington, D.C.

“If so, it would probably take an act of Congress to find them in the bowels of that depository, where they supposedly still stand together, collecting dust and long forgotten, except to a very few,” Haralson wrote.

In 1990, the Native American Graves Protection and Repatriation Act was passed, giving the tribes the ability to claim the remains of their family and tribal artifacts. If an artifact is identified as belonging to a tribe or is the remains of member of a tribe, Riley said a letter is written to the museum and the museum promptly sends the artifacts back to the tribe. There have been multiple artifacts returned to the tribe.

Riley has been working with Victoria Sutton, a Native American law professor, researcher and lawyer currently teaching at Texas Tech University throughout his quest. The two met in 2017 when Sutton was working on her book about the Apache Kid, a former Army scout who was court martialed after turning renegade. Sutton interviewed Riley and they’ve stayed in close contact. Sutton also investigated the trial the scouts underwent at the hands of the Army shortly before their execution.

Sutton learned through her research that at the time of the scouts’ trial there was a debate as to whether the U.S. was still at war with the Apaches and if the scouts could be executed.

The Army realized the U.S. was not at war and they needed a letter from the president in order to execute them. President Chester A. Arthur, who had just become president, signed the order to have the three scouts hung in Fort Grant, Sutton said.

“No mitigating circumstances mattered. The fact that they massacred that medicine man didn’t matter,” she said. “The big question is what happened to the bodies. The big mystery surrounds them.”

In the 1870s or 1880s, the surgeon general asked the Army to send any Native American skulls to the Army Medical Museum. At the time, the archeologists were trying to discern if a skull’s shape or size could indicate a human’s race or heritage. Of course, all of these studies were inaccurate, Sutton said. However, bodies were beheaded and sent to be studied.

“They didn’t have names. They just put numbers on the remains. The doctor could have transferred them to the Army, or sold them to a collector,” she said.

Wherever the remains are found, DNA could help solve the mystery.

“It may take genetic testing to connect the remains to the descendants,” she said. “It’s a long shot trying to connect them. Impossible? No. I think it will be the genetics that will draw closure in identifying them.”

Just this week Riley said his contact at the Smithsonian advised him to call the National Museum of Natural History because the Army often sent remains to the museum. The museum is currently in possession of an estimated 4,500 human remains, and the bodies of the three scouts could be included. Riley intends to contact the National Museum and search through whatever archives they have.

Riley was going to visit the Smithsonian in March of 2020, but said the trip was cancelled due to COVID-19. When he does find the remains, he intends to bury them in the White Mountains area using the Apache burial rites.

The search for the scouts is deeply personal for the septuagenarian. One of the scouts, Dead Shot, is of the same clan family as Riley. Riley described a clan as an area where a family is from and his family comes from the same area.

“They still have relatives here who are anxious to find their bodies,” he said. “They are from the land and they need to be returned home, instead of held somewhere.”

Nichole Cosen, who works at the cultural center with Riley, is a descendant of Dandy Jim. Like Riley, Cosen hopes the remains of her family member are returned.

She found out about her connection to the scout after she talked to Riley and her mother.

“I believe wherever they’re at, they need to be brought home,” she said. “I’m glad to call myself an Apache from the Carrizo area.”

Riley said there is actually an Apache name for archaeologists who steal from graves. Roughly translated to English, it’s “devils.”

“You just don’t take human remains. We know who we are, we don’t need to be studied, how would you like it if your grandmother was taken to be studied?” he said.

If you know any information that can assist Ramon Riley in his search,  contact the Nohwike' Bagowa Apache Cultural Center and Museum at 928-338-4625.