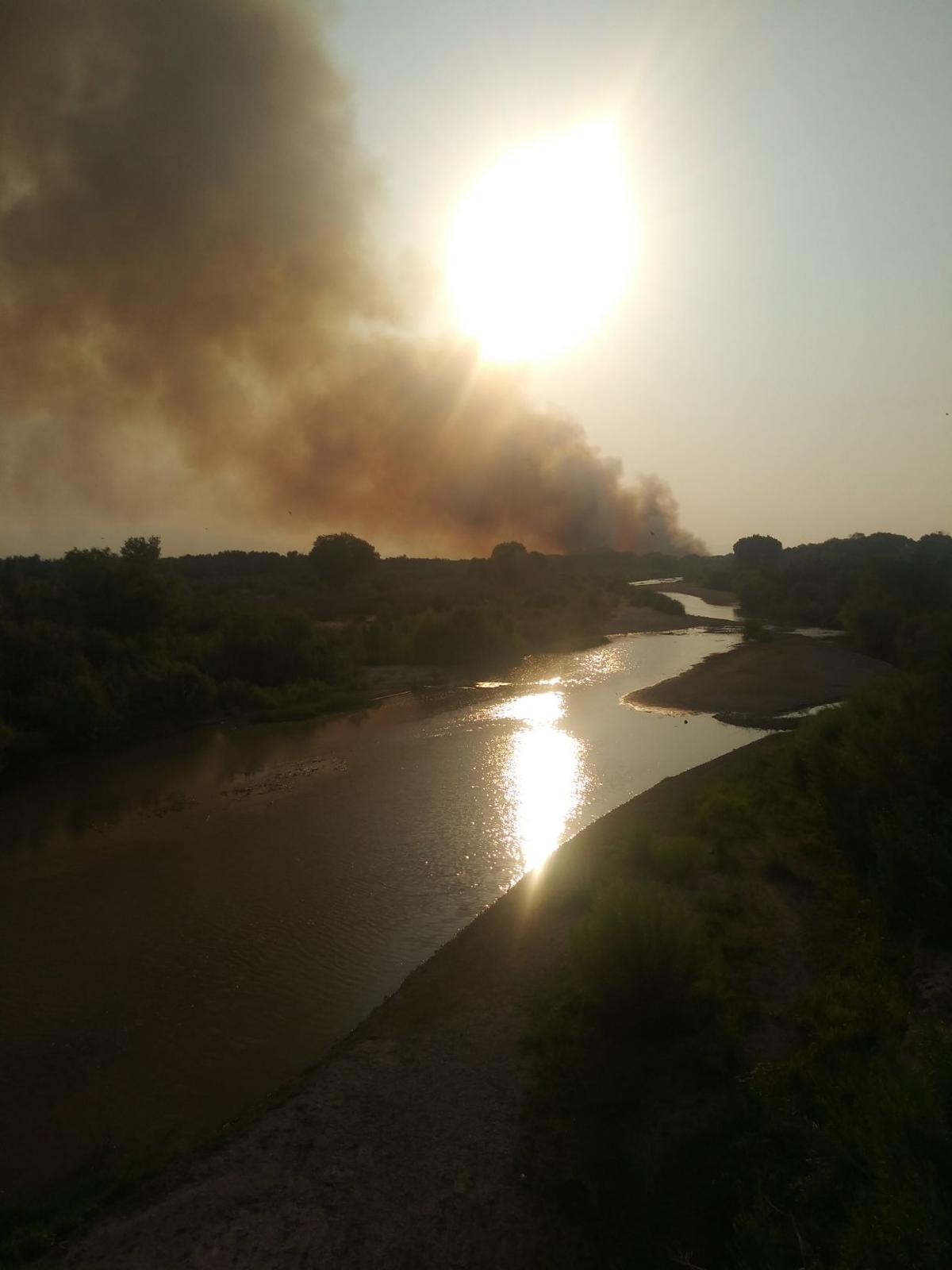 This river bed fire between Pima and Eden and fire from the Bighorn Fire near Tucson was problematic for people with respiratory issues. 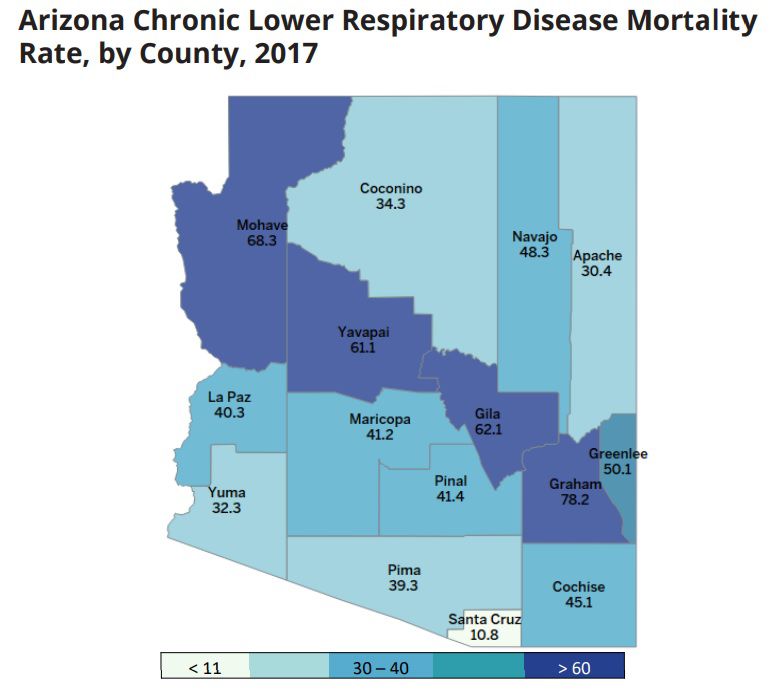 This river bed fire between Pima and Eden and fire from the Bighorn Fire near Tucson was problematic for people with respiratory issues.

With all of that smoke blowing into Graham County from the Bighorn Fire in the Santa Catalina Mountains and recent local wild land fires, you might be wondering about local air quality and potential health hazards.

At it turns out, there are no air quality monitors in the area. However, Graham County Health Department Director Brian Douglas said the wildfire smoke and other environmental issues are a cause for concern.

According to the U.S. Forest Service, individuals who are the most at risk from wildfire smoke include:

• People with chronic health conditions such as heart or lung disease, asthma or diabetes.

• People of low socioeconomic status, including those who are homeless and with limited access to medical care.

According to a 2019 report from the Arizona Department of Health Services, Graham County leads the state in Chronic Lower Respiratory Disease.

As the third leading cause of death among Arizonans aged 65 and older, CLRD is a group of diseases including chronic bronchitis, asthma and emphysema. Douglas said he attributed the above-average rate of CLRD to mining, agricultural tilling, dirt roads and the fact the Gila Valley is shaped like a bowl.

Douglas explained a portable air quality meter for smoke can be requested if there is an environmental emergency in Graham County, such as a forest fire. However they are an in-demand item, and they may not be available even on request.

In previous years, residents would have little warning regarding the smoke being blown from wildfires in other counties. Last week, however, a new wildfire smoke forecasting system was created in Arizona to provide a wildfire smoke trajectory forecast for the state.

Where is that smoke coming from?

Jeremy Michael is a National  Weather Service meteorologist working to provide wildfire smoke projections for the Bighorn Fire. The U.S. Forest Service has teamed up with the Arizona Department of Forestry and Fire Management along with ADEQ air quality experts to create these smoke forecasts. The first forecast of its kind was on Friday. The forecasts are for larger fires which burn for longer durations, but once the forecasts begin they continue daily.

“Right now we don’t have any air quality monitors in Graham County, but there are other things we can use like visibility, social media, people’s pictures or people’s reporting impacts. It can give us some idea, but we usually really like to have monitoring in place so then we can give out official forecasts. But we can still at least give guidance for people that are sensitive or vulnerable, to protect themselves,” said Michael. “Thankfully, the impacts might not be as bad coming up the next few days because the winds are going to get lighter, so the smoke might not travel as far. But there is still potential for smoke to be working its way in.”

On Friday night, when Michael was told of a fire  in the Gila River bed between Pima and Eden he said the smoke would be compounded with the drifting smoke from the Bighorn Fire.

“With that additional firing burning there, that can make the air quality pretty unhealthy tomorrow morning,” he said.

In the Smoke Outlook for Sunday and Monday for the southwest region, smoke from the Bush Fire northeast of Phoenix and Bighorn Fire will settle into the Pueblo Valley overnight. San Carlos to Safford, as well as San Simon will have smoke into Sunday morning.

Brittany Brown, a resident of Thatcher said she awoke at 3 on Saturday morning to low outside visibility due to the smoke. Brown said she could only see 80 feet in front of her, and that the smoke made her throat hurt as she breathed. She also said she smelled the smoke.

According to the Smoke Outlook, “Numerous locations across the Southwest will see occasional smoke impacts. Take precautions to avoid breathing smoke - especially if you are at risk.”

That is not the case in Graham County.

Caroline Oppleman, a spokeswoman for the Arizona Department of Environmental Quality, said ADEQ issues a variety of permits associated with mining activities statewide and the state is responsible for making sure the requirements of those permits are abided by. The requirements of the permits depends on the nature of the mining operation.

"Our mission at the Arizona Department of Environmental Quality is to protect and enhance public health and the environment for all Arizonans," she wrote in an email.

Douglas said he was fairly certain the mines have  air quality monitoring systems, but he's never seen any readings from them.

According to ADEQ, when ambient air quality is monitored, they look for such things as pollutants, particulate matter, carbon monoxide, sulfur dioxide and nitrogen oxides.

Micheal said an air quality meter can be purchased for personal use for roughly $250. However, more expensive meters may be purchased by cities or counties through state and federal grants. Micheal said estimated the price at roughly $10,000 to $15,000.

According to the National Association of Clean Air Agencies, the Environmental Protection Agency offers state and local governments grants under the Clean Air Act.  For the past few years these grants have been approximated at $200 million annually.

In some instances, the federal government can provide grants up to 60% of the cost of state and local programs. In return, state and local agencies have to provide a 40% match of funds.

Douglas said he'd be looking into the grants.

For ongoing smoke forecasts in the state of Arizona and New Mexico visit: