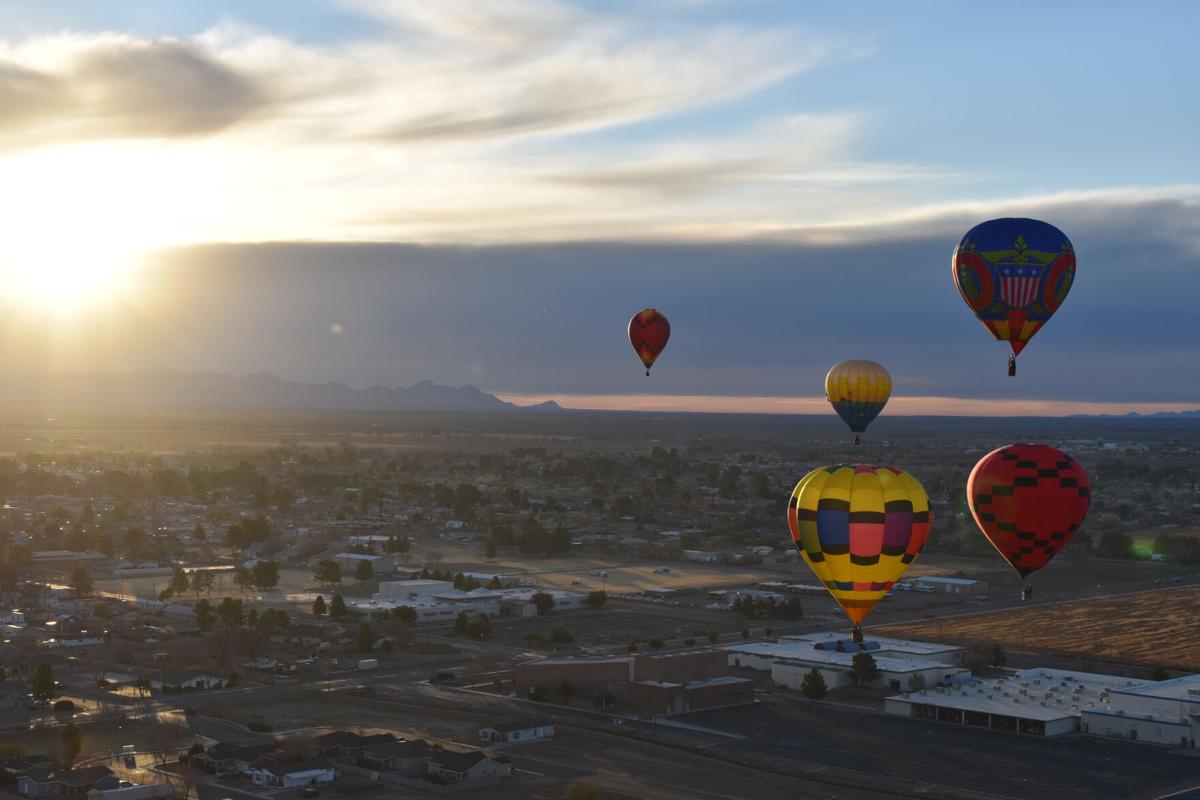 Five of the seven hot air balloons that took to the skies over New Years weekend 2021. 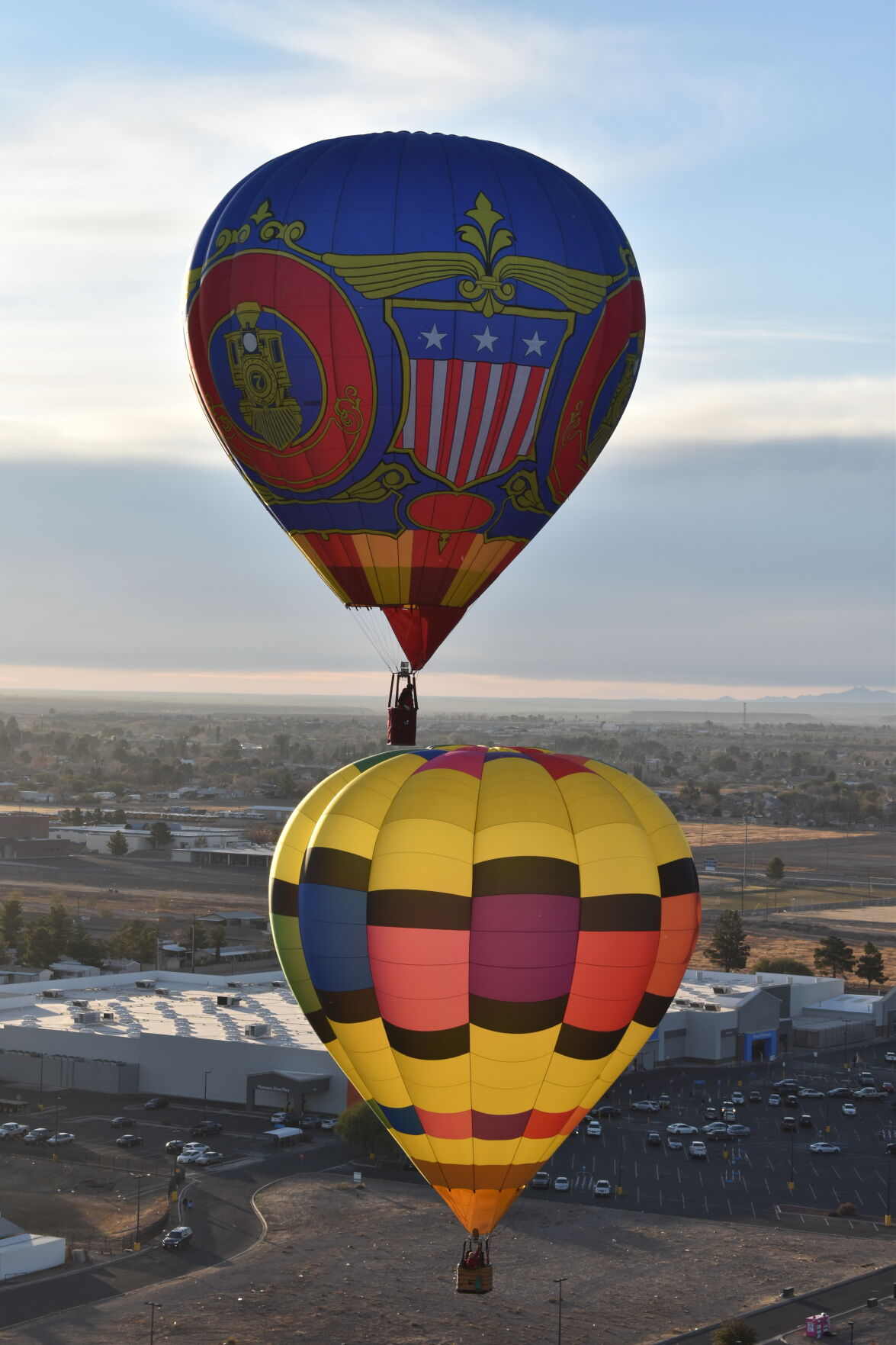 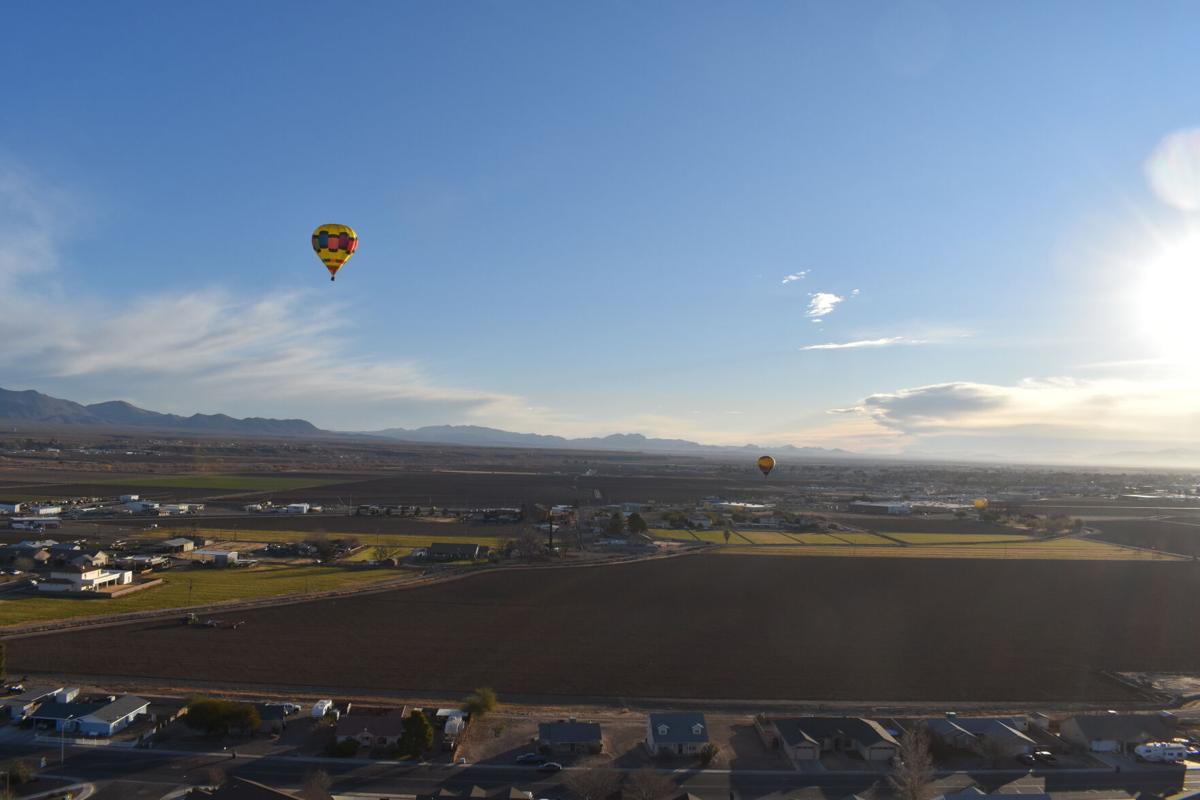 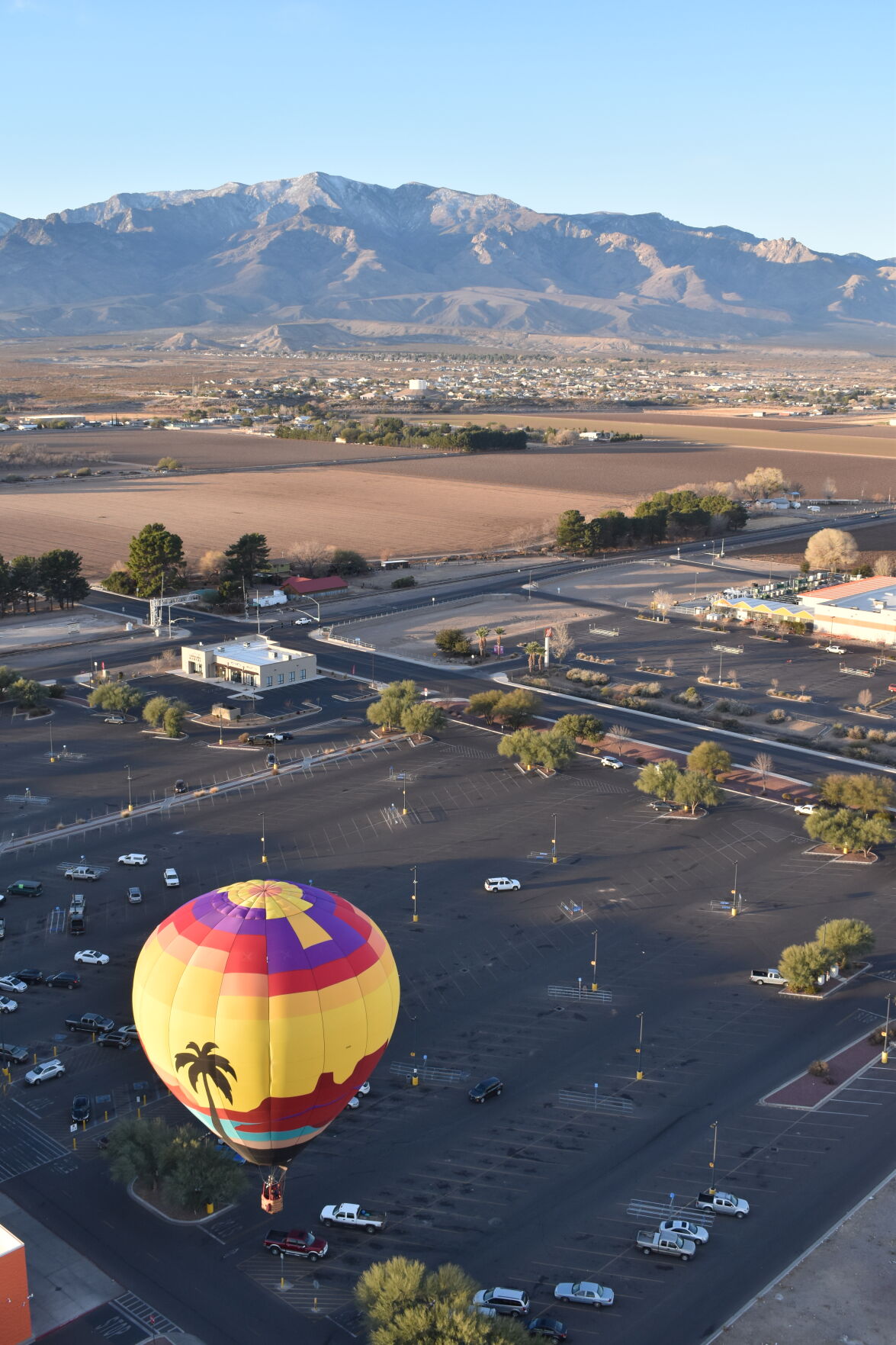 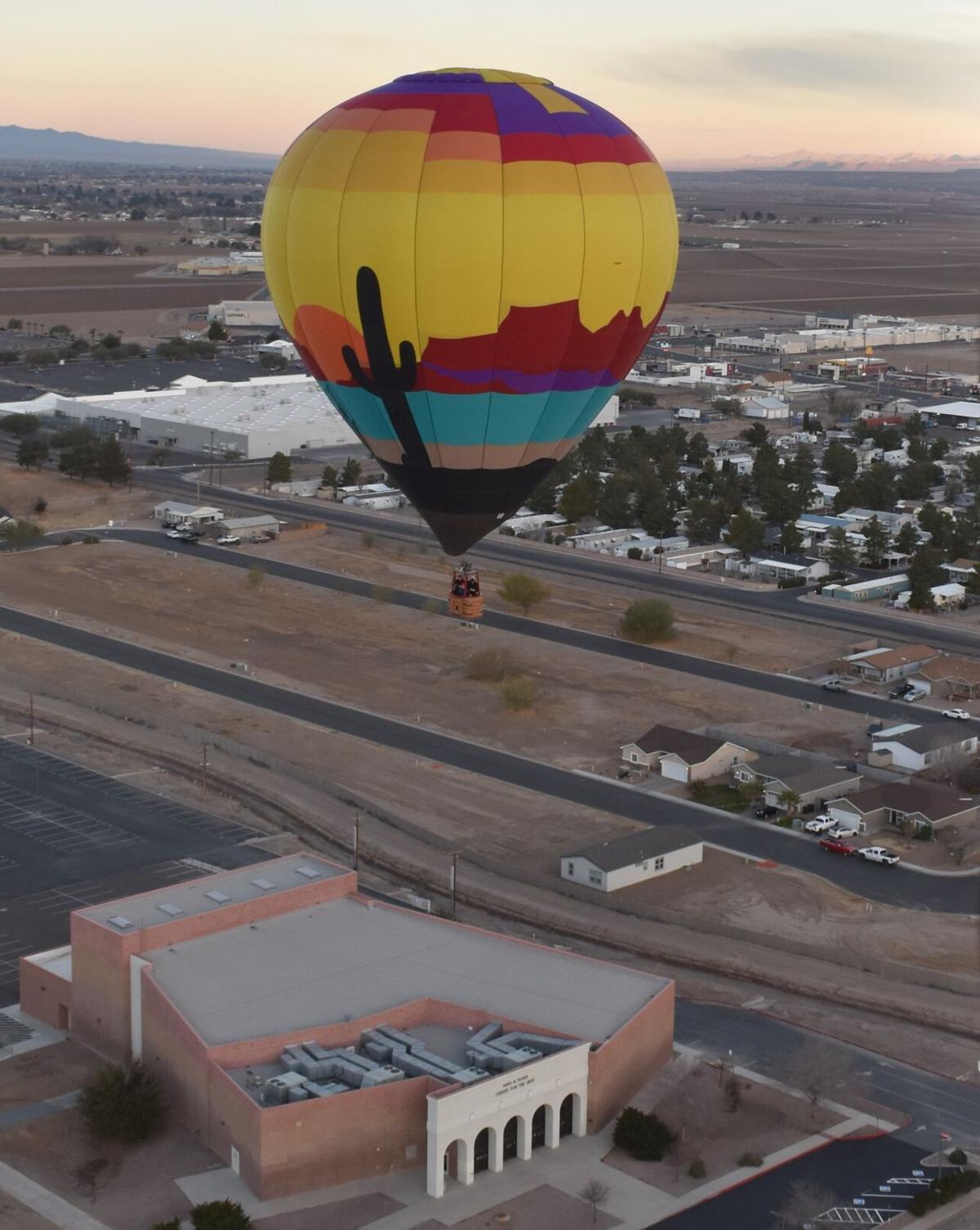 The Floating Awaysis over the David M. Player Center for the Arts on Jan. 1, 2021. 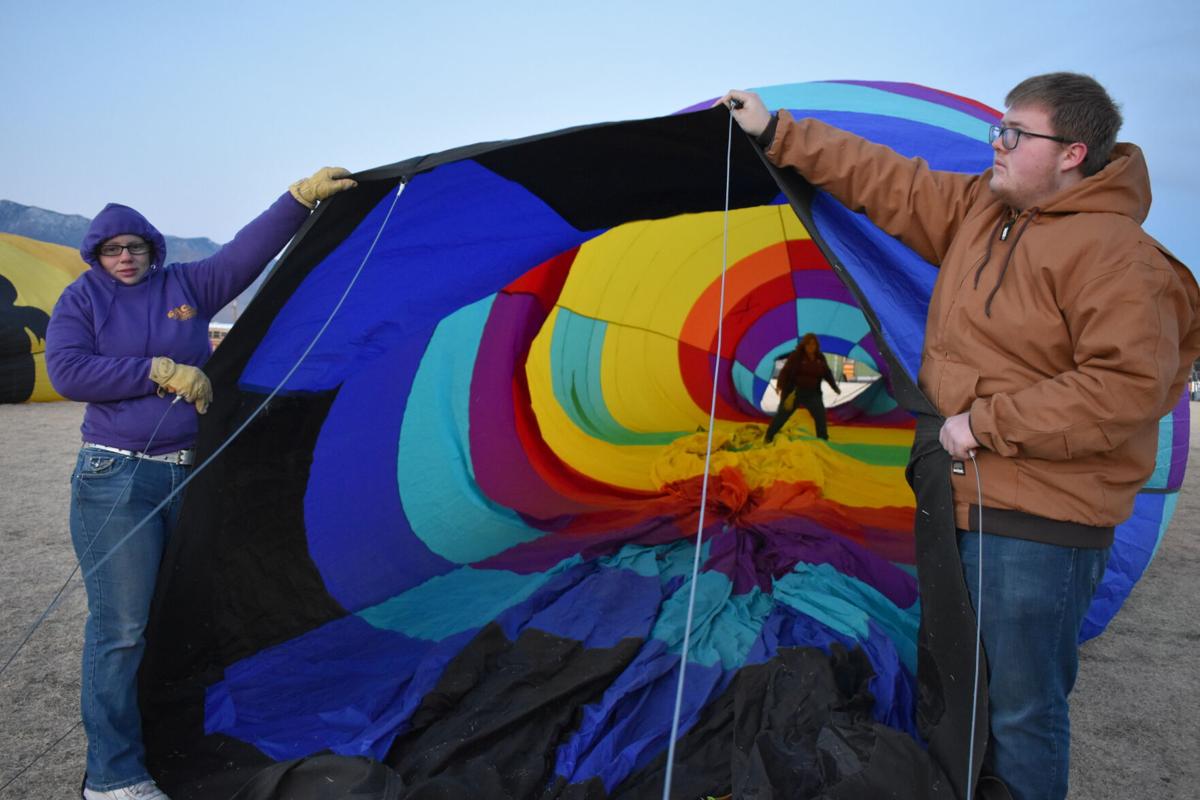 Susan Lindsey makes sure everything is good to go from inside Just Ducky on Jan. 1, 2021. 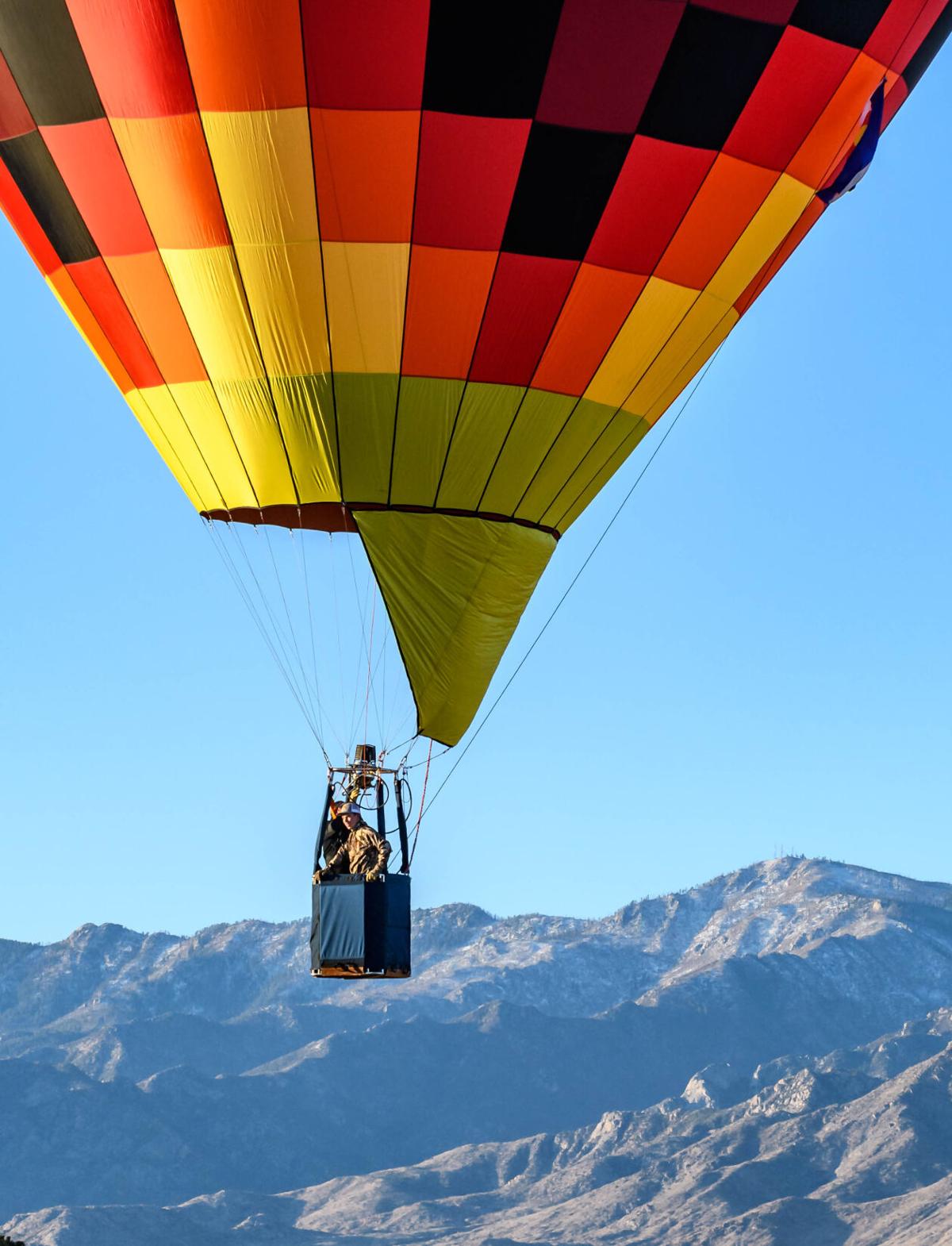 Five of the seven hot air balloons that took to the skies over New Years weekend 2021.

The Floating Awaysis over the David M. Player Center for the Arts on Jan. 1, 2021.

Susan Lindsey makes sure everything is good to go from inside Just Ducky on Jan. 1, 2021.

If the stars align, Susan and Greg Lindsey could get their wish.

Last December, the owners of AZ Air Ventures invited a handful of their friends to come to Safford around New Year’s Day so they could spend four days cruising around the Gila Valley in their hot air balloons.

On Jan. 1, seven colorful balloons 60 to 80 feet tall took to the skies and the Lindseys dreamed of the day when the Valley would host its own balloon festival, just like Albuquerque’s famous International Balloon Fiesta. They were convinced people from all over the southwest would descend upon the area to take part.

Well, Graham County Chamber of Commerce Executive Director Vance Bryce and his colleagues fell in love with the idea and are now taking steps to see if they can make it happen.

And there are a lot of steps, Bryce said.

If things go as hoped, Bryce said a four-day ballon event will be held Dec. 30-Jan. 2 with flights taking off every morning if the weather allows.

On Dec. 31, organizers would love to hold a 5K race and a community block party and residents could ring in the new year at a street dance, Bryce said.

What could be more appropriate than to start the new year with a healthy event like a race and creating a vision for your future from 1,000-3,000 feet up? Bryce asked.

The Lindseys, who are two of only 3,000 licensed hot air balloon pilots in the U.S., have agreed to be the “balloon meisters” for the event. A balloon meister is in charge of and coordinates all of the activities at a balloon festival and makes sure that all balloon pilots meet all FAA requirements.

Seventeen of her friends have already said they’d love to participate in the event, including all of the pilots who visited last New Year’s, Susan Lindsey said.

But first, the organizers have to seek the approval of the Safford City Council, find a large enough location to launch from and obtain permission from the land owners. In addition, they’ve got to investigate and deal with all of the FAA requirements.

Although some might think the best place to hold the event would be the Graham County Fairgrounds, it isn’t, Lindsey said.

“The problem with the fairgrounds is the location of the winds. They blow around the mountain closer to Discovery Park, which would make for much shorter flights,” Lindsey said. “If we can launch from (a more central location), we can go all the way down to Central and Pima. That way we’d be able to share the balloons as much as possible with the community.”

If all of the permissions are granted, the next big step would be to obtain sponsorships for each balloon, Bryce said.

Typically sponsors — whether businesses or individuals — pay for a ballon crew’s hotel stay, cover traveling expenses and the propane, Bryce said. In exchange, the sponsors will often receive ride tickets.

The organizers will limit the number of balloons to 17-25 the first year, but Lindsey said she believes the event could grow. Either way, balloon festivals draw big crowds from all over — which means visitors will be spending money locally on lodging, meals and gas.

Pinetop held a balloon rally in June that was attended by 5,000 people and all of their hotel rooms were booked by March, Lindsey said.

And while the balloons weren’t able to fly because of wildfire air suppression efforts, everyone still had a blast, she said. There were static displays, people were able to go up in tethered balloons and there were balloon glows, when pilots inflate and ignite their burners for an impressive sight.

Bryce has high hopes the event can move forward.

People are fascinated by the Lindseys’ balloons, The Floating Awaysis and Just Ducky and the event would be a nice way to extend the holiday season, Bryce said.

“Everyone always talks about them when they’re riding down the Valley,” Bryce said.

Lindsey is convinced there are a lot of people who sit home on New Year’s Eve who would welcome an event like this.

“I don’t go out on New Year’s Eve because I don’t like drunk drivers and the things that happen, but if we had a family-oriented block party I’d go,” Lindsey said. “This is different. This is something the community doesn’t already have.”