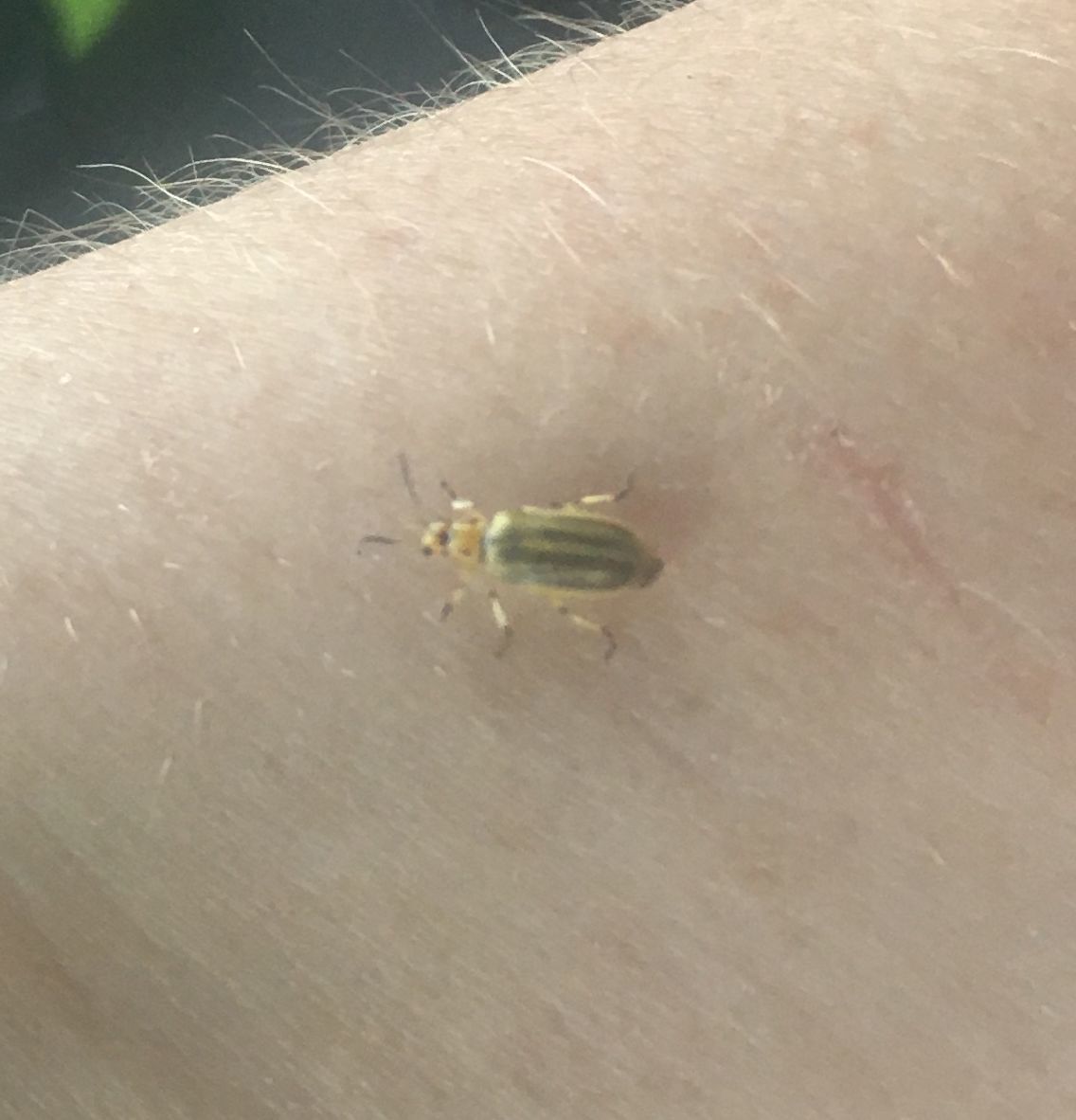 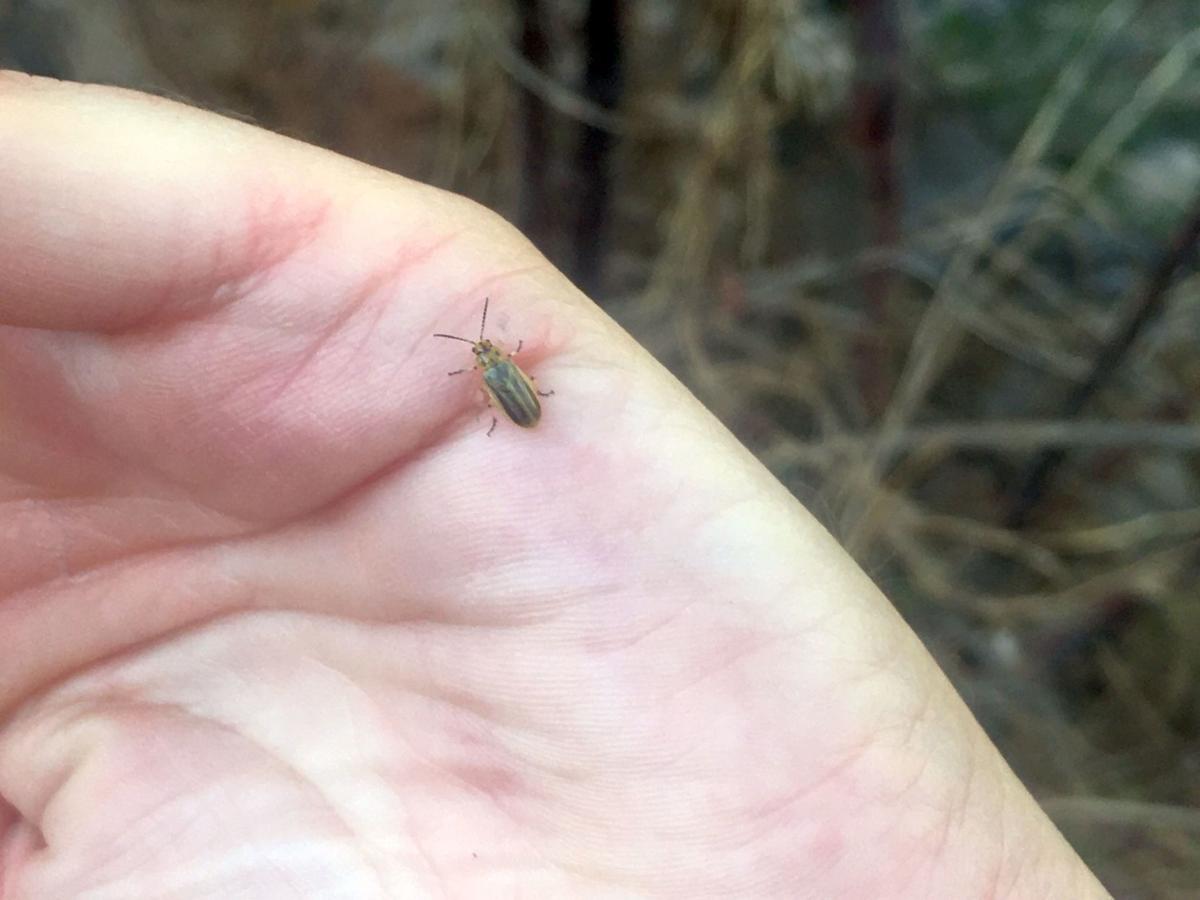 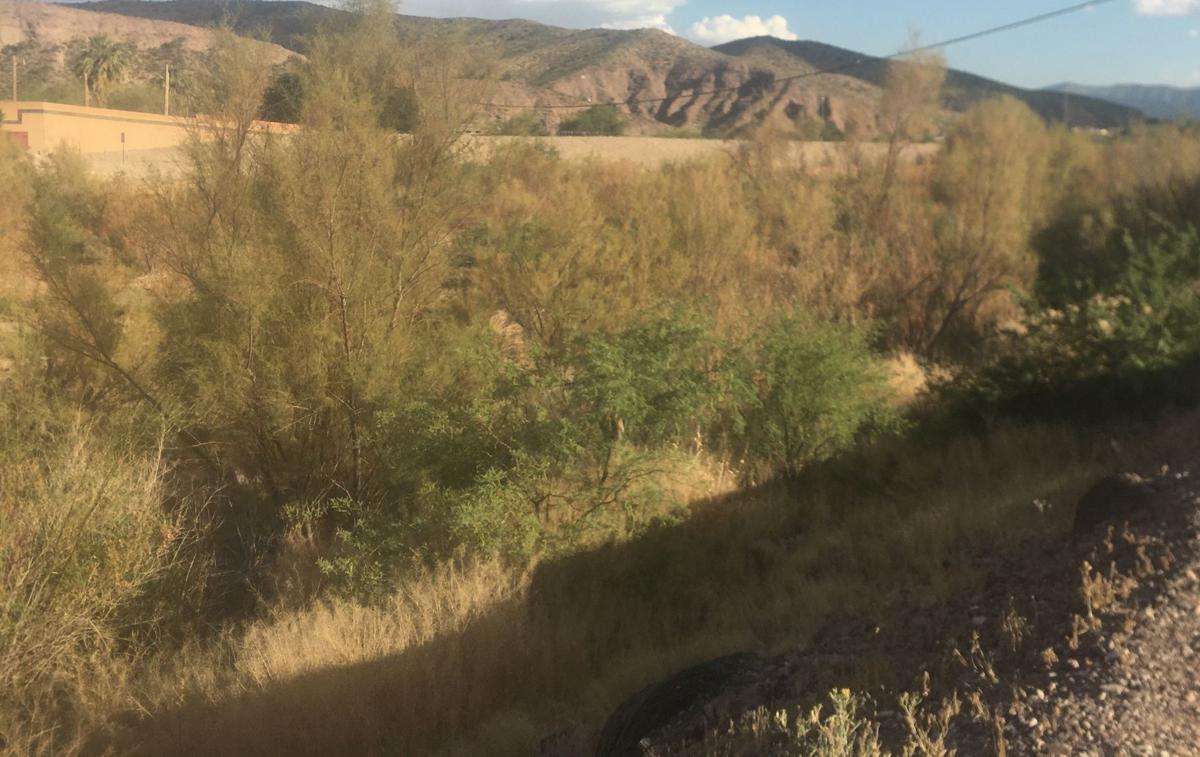 Defoliated tamarisk along the San Francisco River around Clifton 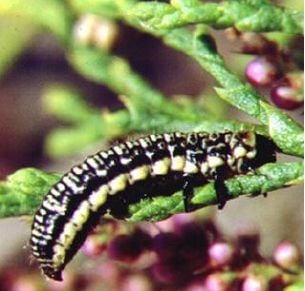 After years of waiting for their arrival, tamarisk leaf beetles are getting closer to the Gila Valley.

Last month the Gila Watershed Partnership found the beetles along the San Francisco River in Clifton. The insect was introduced to the West in the early 2000s to control invasive tamarisk, or salt cedar, which has crowded out native plants along many rivers. The beetles feed on tamarisk leaves but do not eat other plants.

Salt cedar, native to Central Asia and the Mediterranean, was introduced to the United States in the early 19th Century as a windbreak and erosion control aid.

“It basically took over the waterways of the West,” said Graham County Cooperative Extension Director Bill Brandau. “People have been looking for a way to control salt cedar for a long time.”

GWP Executive Director Melanie Tluczek said in late June the beetles had defoliated about three miles along the San Francisco.

“We don’t know when or how they came to be in the watershed, but the defoliation has only become apparent since early June. This is exciting because it’s as far south and probably the lowest elevation they’ve been found. This is all going to be new information to science.”

“My hope is that the beetle will be a game changer, that we’ll see a return to a pre-settlement Gila River — a wider-open river with some native vegetation, not the clogged river we have now,” said Brandau. “Nobody living has seen the Gila as it was pre-settlement and pre-salt cedar.”

The GWP sent live samples of the beetle to a Colorado lab and were waiting for DNA results to find out which subspecies it is.

“That will help us better understand how fast they may move downriver to the Gila,” said Tluczek.

“Once they get going they defoliate rapidly. Within a matter of weeks they’ll move through an area and defoliate it,” said Brandau. “Mature beetles are very mobile; they’ll move 60 or 70 miles a day.”

Tluczek said there were plenty of native plants on the San Francisco — cottonwood, willow, ash, walnut and others — to fill the spaces left by dead salt cedar.

“The fact that it’s perennial all the way down is also really helpful in keeping that native vegetation intact. It’s really a nice situation up on the San Francisco. When the beetles get to the Gila River it’s going to be a different story because so much of the Gila is dominated by tamarisk,” she said.

“The initial defoliation could happen this fall,” said Brandau. “The idea is that the beetle will eventually take out 75-80 percent, maybe more, of the salt cedar. Something is going to grow in the vacant spots; the question becomes what.”

Other invasive plants moving in is just one of the GWP’s concerns. As the beetle makes its way through the salt cedar it will threaten the endangered Southwestern willow flycatcher, which nests in those trees — and there will be increased risk of fires and flooding along the Gila.

“That’s one of the reasons why we want to start the revegetation process,” said Tluczek. “Our current restoration project is an attempt to get ahead of it and create islands of habitat, but we’re going to need more — especially going up the river as the beetle comes down.

“For the short term they’ll continue defoliating through the summer, then they’ll go underground.”

It’s unclear how all this will affect the river itself. Brandau said salt cedar uses, on average, the same amount of water as a cottonwood — but there’s more to it.

“If cottonwood is 1 in a natural system, salt cedar is 2,000 — so it’s consuming a lot more water. Will that translate into water in the river? I don’t know. The likelihood is yes, but how much nobody really knows. In time we could see a much more open, less vegetated river.

“I hope people in Graham County remember the majority of land on that river is private land, and that those who come running in to fix us and the river respect people’s property rights.”

To mitigate the risks of fire along the Gila, Brandau developed a plan that will create a series of firebreaks in the riverbed. His plan was recently approved by Graham County and now awaits grant funding.

Brandau is also thinking about the beetle’s effects on erosion control dams in Graham County — many almost 100 years old.

“There are well over 4,000 structures and the majority are associated with salt cedar,” he said. “These beetles aren’t going to confine themselves to the Gila River. They’ll go anywhere there’s salt cedar. When you get roots in a dam and the tree dies, the roots rot and the dam’s structural integrity is reduced.”

As they watch for the tamarisk leaf beetle’s arrival, the GWP is looking for volunteers to help.

“We’re looking for people to do beetle monitoring,” said science and outreach manager Kara Barron. “Even if we’re not seeing it on the Gila yet, periodic monitoring will help us discover it as soon as it arrives.

“We’d ask people, probably during summer, to go with nets to spots along the river and try to see what life stages of the beetle are there. They would report what they’re seeing and where. We’d like to start as soon as possible.”

‘We’re going to experience kind of a grand experiment,” said Brandau. “We people brought salt cedar here, and we people have reunited the beetle with the tamarisk 100 years later. I hope they’re still friends.”