A small population of Gila trout was recently introduced to Frye Creek via backpacks. 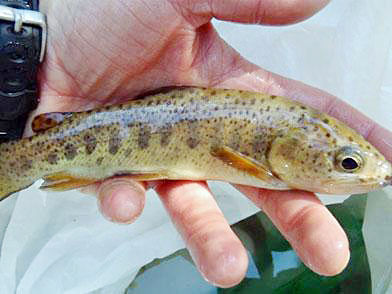 A small population of Gila trout was recently introduced to Frye Creek via backpacks.

SAFFORD — Two years on from the devastating Frye fire, a big step in restoring Mount Graham’s Gila trout population was taken this week.

On Monday, Nov. 4, the Arizona Game and Fish Department and U.S. Fish and Wildlife Service, along with Trout Unlimited and University of Arizona volunteers, backpacked 250 fingerling Gila trout into Frye Creek. Considered a threatened species under the Endangered Species Act, the trout occurs naturally only in the headwaters of the Gila River system. Anglers are allowed to catch Gila trout, but must release them unharmed.

The newly introduced fingerlings, from the Mora National Fish Hatchery in New Mexico, were placed in various spots on Frye Creek. AZGFD public information officer Mark Hart said the trout looked “pretty good.” Hart said they would be monitored, and that the department would like to introduce more next spring.

Efforts to restore the mountain’s Gila trout population started in 2009, but the reintroduced fish were all lost in the aftermath of 2017’s Frye fire. Hart said some egg masses were placed in the creek this spring, but nothing came of this.

Nate Rees, Arizona field coordinator for Trout Unlimited, said, “We have been working closely with the Arizona Game and Fish Department to bring these populations back. Habitat surveys have been conducted twice a year after the fire. Trout Unlimited will conduct a snorkel survey in the spring of 2020.”

“Undaunted, we are going to continue to try to re-establish these trout on the mountain,” Hart said.