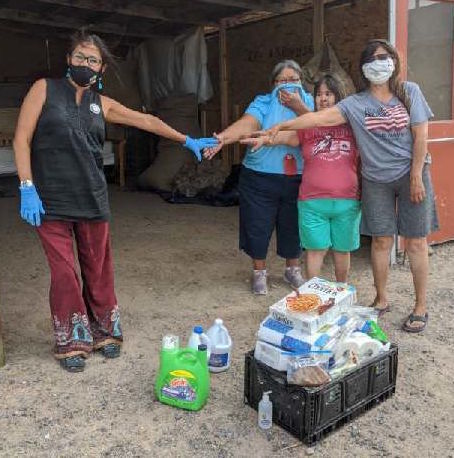 Janine Yellowhair Brown, far left, with some members of a Navajo family after dropping off supplies. 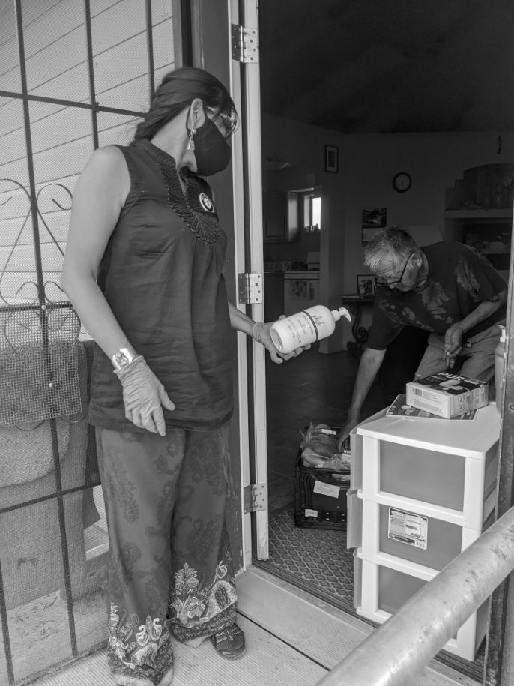 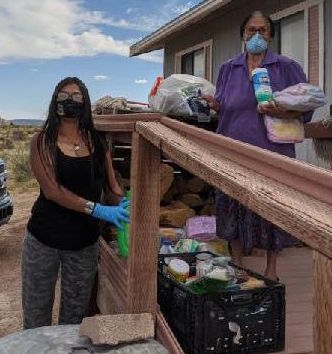 Janine Yellowhair Brown, far left, with some members of a Navajo family after dropping off supplies.

This month a local donation drive gathered about $3,000 in supplies to help the Navajo Nation as they struggle with COVID-19. At the end of last week, those supplies were delivered by truck to Navajo families in the White Cone area.

The Gila Valley Rotary Club partnered with Janine Yellowhair Brown and Stacey Scarce of Our Neighbors Farm and Pantry (the pantry itself was not involved) to collect donations of money and cleaning/health supplies.

Dennis Sawyer of the Rotary Club said the club was looking for a project and he suggested the donation drive to Brown, who along with Scarce collected and delivered supplies to the Navajo Nation in May.

“We saw the need for this,” Sawyer said.

“We sold 198 Navajo tacos and 89 fry bread, so it went well,” said Brown, who came to the Gila Valley from the White Cone area.

“It just shows the support of the valley. It’s a really giving community for the right causes,” said Sawyer. “For a project that was thrown together in about a week it did pretty well,” said Sawyer.

On Thursday Brown and Scarce headed out on their second trip north, in a truck packed with supplies.

“The space between us was taken up and there was stuff all around me in the passenger seat,” Brown said. “I was able to put on my seat belt and keep in one position the entire way.”

Unloading some items at Brown’s mother’s house, they enjoyed a meal of mutton stew and fry bread then started delivering supplies to local families.

“We wore masks and gloves the entire time we handled the food and supplies, and tried to keep as much distance as possible,” said Brown.

Keeping that distance included sleeping outside.

“My mom, grandma and aunt and uncle helped me put together a list of people who are being missed because when the big donations come the only people who get the food are the ones who have a vehicle and who know about what’s being given,” she said. “That leaves the people who are way out in the boonies and don’t have any way to know about the trucks bringing supplies. Those are the people we were able to reach.

“They felt remembered, they felt loved and they were just so glad we came. We gave them words of encouragement, gave them hope and strength, and just talked with them for a bit; I think that was something really needed as well.”

In one home they visited, eight miles down a dirt road, a woman was taking care of her 90-year-old grandmother. The granddaughter had no car, so she depended on others to drive her to the closest store or bring them supplies.

Some families lack vehicles and some homes have no electricity or running water.

Housing is limited on the Navajo Nation; multiple family members often share a house and can’t isolate themselves. Scarce said three people died of COVID-19 in one family and each of them was buried an hour apart. One man said his family was trying to get tents and cots so they could keep some distance, she said.

“They’re very aware of how to protect themselves; they just don’t have the means to do it,” said Scarce.

In two days, Brown and Scarce served more than 30 families in White Cone and the nearby towns of Jeddito, Greasewood and Indian Wells. Brown said people were happy for the cleaning supplies and homemade hand sanitizer they brought.

“They said they can never find those items no matter where they go.”

She and Scarce also brought activities for children, including activity books.

Brown said tribal members are diligent about wearing masks. At a home about five miles off the highway, an older man had his mask on while hoeing weeds outside.

“His family was inside; the only other thing around him besides the house and some cars was a horse and some sheep. So people are being safe. They don’t want to come in contact with the virus.”

As for social distancing, Brown said people are being encouraged to stay two sheep apart.

“People are scared,” she said, adding that White Cone was a COVID-19 hot spot. “A lot of them are just staying home.”

Fear of catching the virus isn’t all people on the Navajo Nation are dealing with; there’s also isolation brought on by fear and COVID-19 restrictions.

Brown said one woman cried because no one had visited her in five months.

“She was crying because she missed people; she missed her relatives, her own children. All I could do was encourage her to stay strong and let her know we’ll get through this. She calmed down when I let her know that even though we’re far away we’re thinking of them.

“People were really happy to meet Stacey and to know Graham County cares about the Navajo people. Everybody said thank you to all who donated and helped bring the stuff to the Navajo Nation,” aid Brown. “We felt very proud to be out there and help defeat this virus.”

“We do plan on doing this again,” said Scarce.