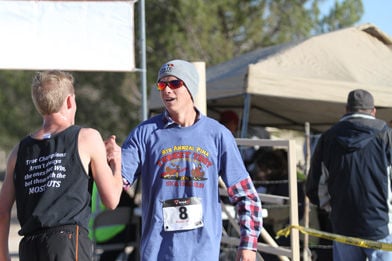 Two-time winner Brendan Allred (8) is congratulated by the runner-up. 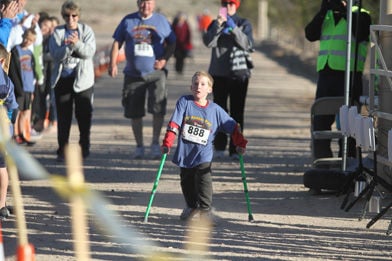 A young athlete makes his way to the finish line in the one-mile fun run. 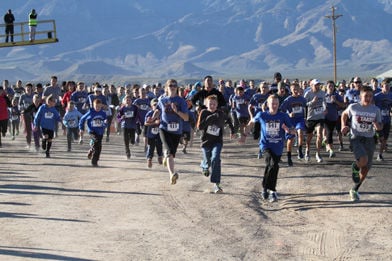 Runners take off from the starting line at the Pima Turkey Trot Thursday. 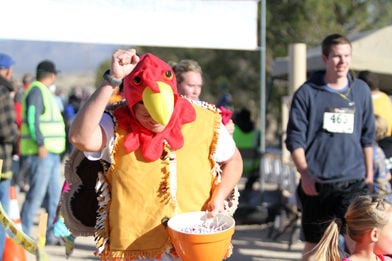 Stephanie Hoopes hands out lollipops immediately upon finishing the race herself.

Two-time winner Brendan Allred (8) is congratulated by the runner-up.

A young athlete makes his way to the finish line in the one-mile fun run.

Runners take off from the starting line at the Pima Turkey Trot Thursday.

Stephanie Hoopes hands out lollipops immediately upon finishing the race herself.

PIMA — Perhaps not everyone associates Thanksgiving with an early-morning 5k run, but based on Thursday’s turnout, that perception may be changing.

Nearly 900 people participated in the annual Turkey Trot at the Pima roping arena.

“I started running at Lee Williams High School in Kingman,” Allred said. “I’m visiting my family here. I went to states last year and placed 32nd. This year, I placed 16th and won a medal. My Aunt Wendy told us about it last year; it was a great time, so we did it again this year.”

The finish line had a taped-off path where watchers offered outstretched hands to give high fives to participants as they completed the race. Spectators cheered as an announcer kept a lively commentary going all the way to the last runner.

Everyone was awarded orange slices, bananas and bottled water, and a lucky handful won medals for their age groups, both male and female. And to finish the event off, dozens of items were handed out via raffle, the items ranging from a teeth-whitening kit to hoodies. One man won a makeup kit.

“It all started because Cody and I wanted to have a race here in Pima,” Nelson said, “instead of having to travel. We started it so we could run in it, which now we never run in now,” she added with a laugh. “We have lots of help — mostly family — and all the proceeds go to the Pima schools. The first year, we had 50 racers, and then each year, it grew by about 150 to 200 people. Last year was 879. This year, we just passed that.”

The race sports a sound system, music, an ATV to escort the rear of the racing pack, raffle prizes and more. Local businesses donate prizes, like T-shirts and gift certificates.

Stephanie Hoopes has taken on the role of official mascot for the Pima Turkey Trot. She’s a sponsor from Casa Mañana and has participated in the run every year. This year, she handed out lollipops to children after finishing the race.

PIMA — A decade-long Pima tradition is nearly here, and now is the time to join in.