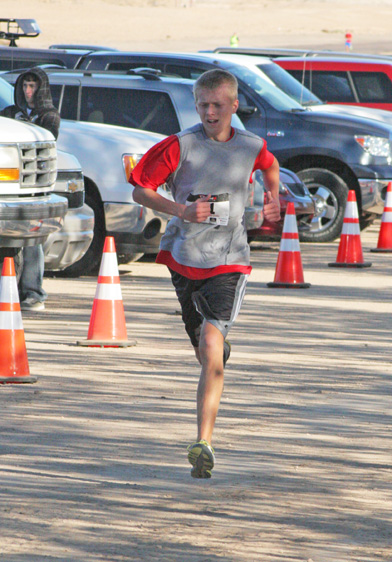 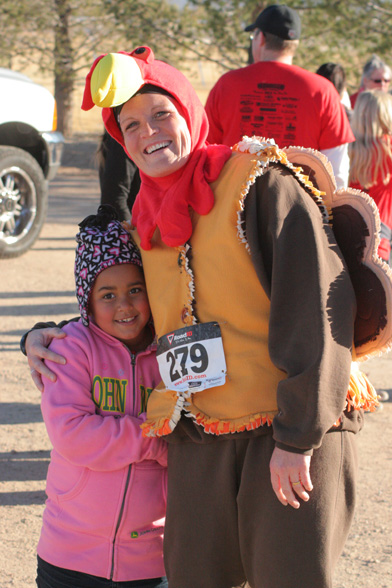 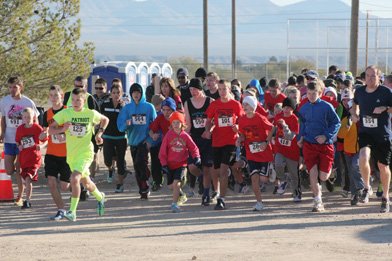 Runners get underway at the start of the eighth annual Pima Turkey Trot Thursday. A record number of participants ran the event, which raises funds for Pima Schools.

Runners get underway at the start of the eighth annual Pima Turkey Trot Thursday. A record number of participants ran the event, which raises funds for Pima Schools.

Despite temperatures in the mid-30s at the start, the sophomore at Lee Williams High School, in Kingman, set a new course record in winning the eighth annual Pima Turkey Trot Thursday. He finished in 17 minutes, 38.03 seconds.

Allred was in the Gila Valley to spend Thanksgiving with family when he decided to run.

“I went to state (finals) in cross country, and I want to get ready for track season,” he said.

The first female to finish was another high school runner, Taryn Estavillo, who finished eighth overall in a time of 19:52.31.

A total of 595 runners and walkers participated in the 5k race, while an estimated 300 took part in the 1-mile event, setting another record.

Organizers Melinda Nelson and Cody Marshall originally started the race to have a local even in which they could participate.

“But it’s gotten so big, it’s too stressful to run and do everything else,” Nelson said. “So we get our (running) fill when we go out to check the course the night before.”

Marshall said the event — which helps raise money for Pima schools — has turned into more of a family event than a competition.

“We see whole families out here, with a number of people that have never run a race before,” Marshall said. “And we like to keep the cost low to encourage families to come out. I think we’re one of the lowest cost chip-timed events.”

“We’ve got this money, a grant from Freeport (McMoRan), the district put in a few thousand and we have a federal playground grant,” Rickert said. “We plan to install the equipment during spring break and have it finished before the end of the school year.”

The full list of finishers and times is available at pimaturkeytrot.com.

PIMA — A decade-long Pima tradition is nearly here, and now is the time to join in.