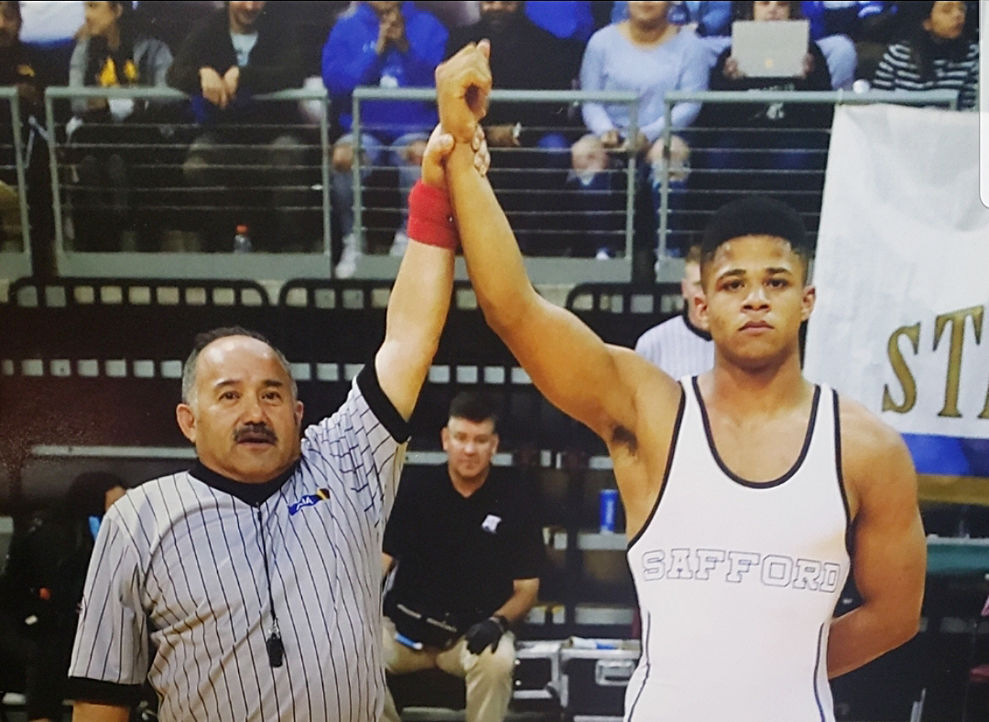 Safford’s has his hand raised in victory after winning the state championship in the 182-pound weight division of the Division 3 finals in Prescott Valley on Saturday. 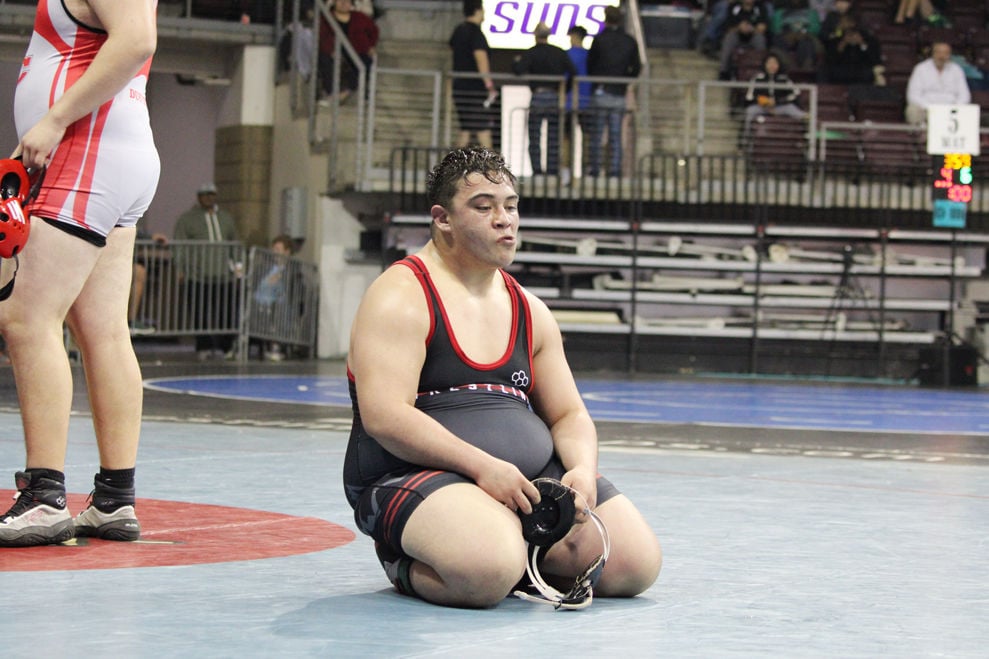 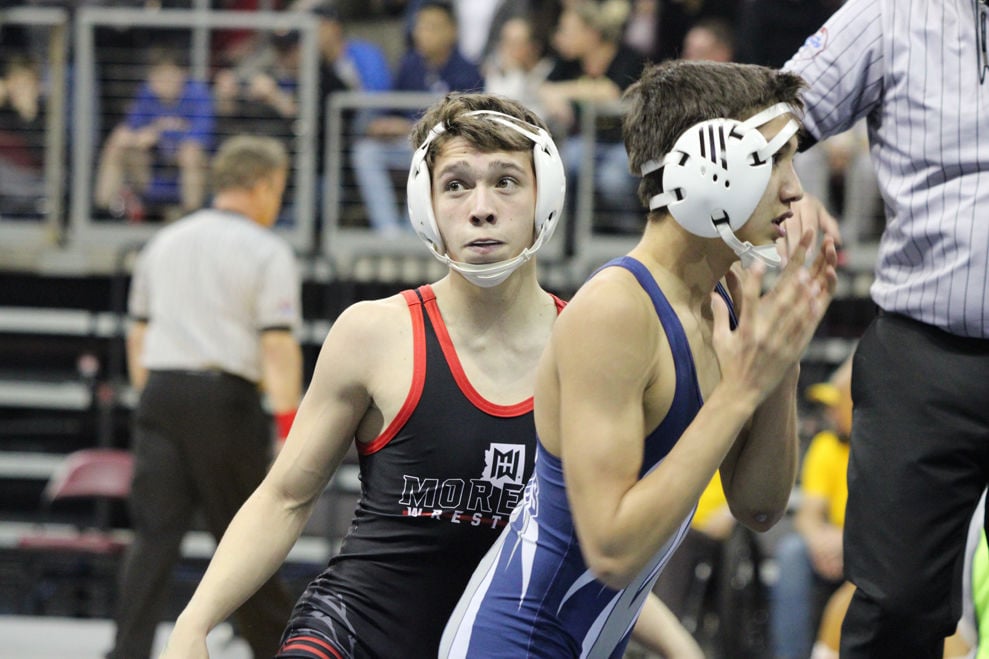 The Wildcats’ Solomon Lucero looks at the clock in the final period. 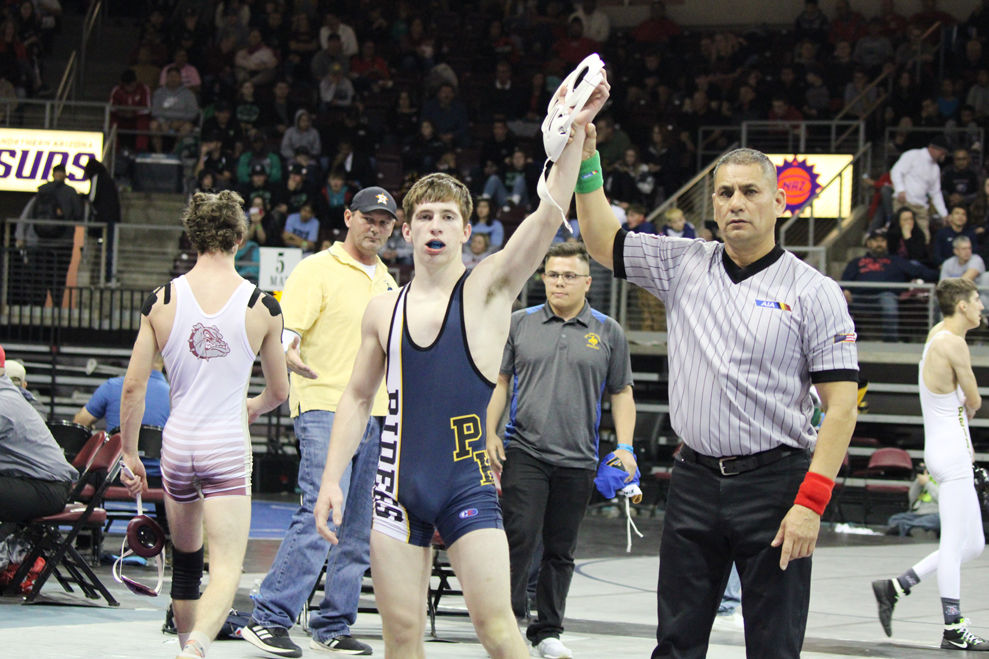 Pima’s Jarom Larson get’s his hand raised after a quarterfinal win at 120 pounds. 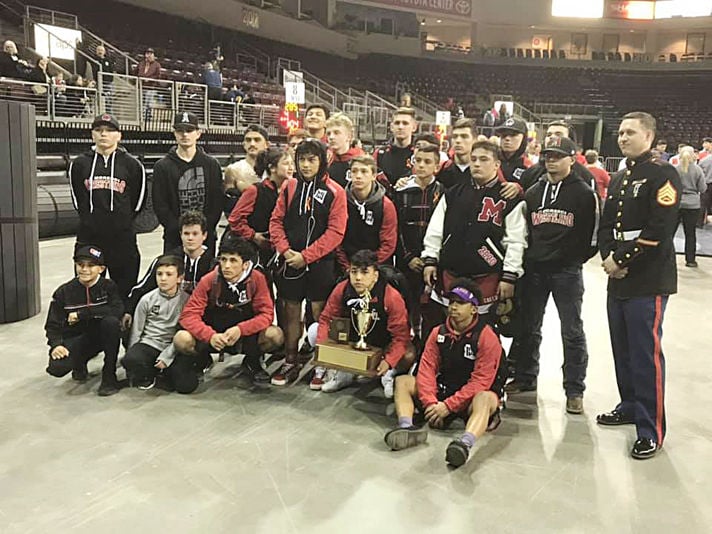 The Morenci Wildcats take a team photo with the second-place trophy.

PRESCOTT VALLEY — Day two of the state wrestling finals was filled with a few victories for the locals, and a few tears and heartbreaks.

“(It’s) not where we wanted to be. We will go back to work and grow from this. We appreciate all of the support of our community,” said Morenci head coach Casey Woodall.

Solomon Lucero defeated his semifinal opponent, Kristopher Reyes, of Antelope, but lost in the championship match, 12-10, to Terrell Kinlicheen, of Joseph City, to finish second at 106 pounds.

At 126 pounds, Conrad Aguallo defeated Shaun Tuni, of Monument Valley, via pin in the semis, and then lost via pin to Emilio Ysquirre, of Santa Cruz Valley, in the finals to finish second.

Calvin Dunning, at 132 pounds, defeated Trevor Tenney, of American Leadership-Gilbert North, 3-2, in the semifinals; and then lost, 9-2, to Tanner Crosby, of St. Joseph, in the finals to finish second.

Cody Torres, at 152 pounds, scored a major decision over Evan Clute, of Santa Cruz Valley, in the semifinals. But he lost his chance at a state championship when he was injured in the finals match against Willcox’s Kelby Flowers.

“We brought four freshmen to state and it kind of shocked them at first. I believe, overall, we did good,” Flowers said.

Cowboys Ote Allsup finished in third place in the 160-pound weight division. He lost in the semifinals, 2-1, won via pin in the semifinals of the third-place bracket and defeated Marc Irigoyen, of Round Valley, 9-3, to take third.

White breezed through competition, pinning each of his opponents, all in the first round and only one match going longer than one minute.

In the semifinals, White pinned Alan Montesinos, of Thunderbird, in 42 seconds, and then he pinned Ethan Wright, of Apache Junction, in 59 seconds, in the championship match.

White finished the year with a perfect 55-0 record.

As a team, Safford finished in sixth place with a score of 71.Yuma came in first with a score of 111, followed by Sahuarita at 91.5, Chino Valley with 90, Tempe with 84, Mingus with 81 and Safford.

The Bulldogs’ Karson Zimmerman finished in fifth place in the 145-pound weight class. He lost in the semifinals via a 6-0 decision, lost in the quarterfinals of the third-place bracket by a 5-3 decision, and defeated Gabriel Elias, of Sahuarita, 6-0, in the fifth-place match.

“Our team came out a little slow this weekend, we came back and did very good overall,” Zimmerman said.

Briggs Baldwin also finished in fifth place. He lost in 170-pound quarterfinals by a single point, 12-11; and lost via pin in the quarterfinals of the third-place bracket. He captured fifth place with a major decision over Dakota McMains, of Chino Valley.